Finished the basic tartan pattern - this would be the "Government" or "Military" pattern without any of the individual stripes unique to each Highland regiment.

First, the kilts were painted a dark blue for a base: 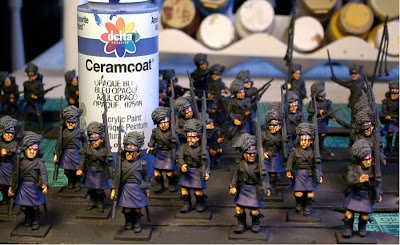 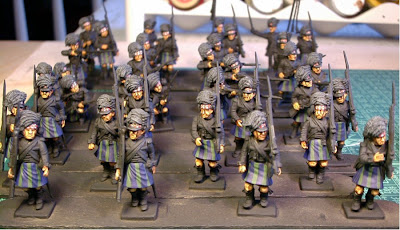 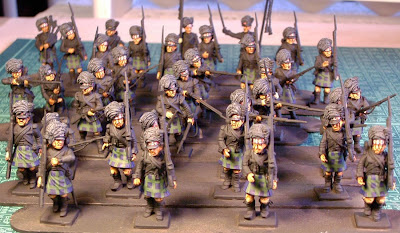 Light green squares were then added to where the dark green stripes crossed. A lighter blue was also added in the dark blue squares - just to lighten it up a bit: 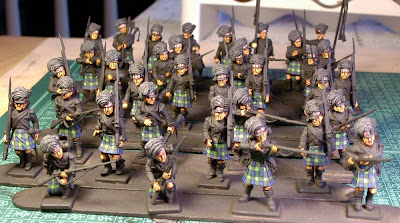 Next, I'll have to get up the courage to add the pin-stripes between the squares. A minimalist (aka less is more) approach will be taken. That is, for the 79th's Cameron pattern, only one red stripe will be painted instead of the normal two, side-by-side. And instead of a yellow stripe within the two red stripes (since there will only be one) - the yellow stripe will be in the alternating squares. That's the plan anyway. Enough for now - taking a break on this and will rest up before I do the next step.

This is the actual pattern used by the 79th Cameron Highlanders. It incorporates elements of the Macdonald and Cameron Clans. 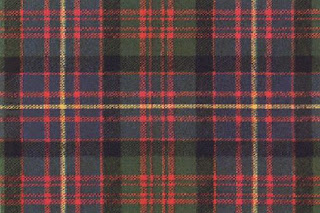 This is how I hope to simplify it - only one red stripe through the green squares and one yellow through the blue squares. I beg forgiveness for this transgression from the clans, and my intent is not to dishonor them. 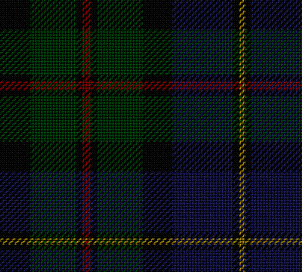