Here is another figure which my fellow Hawaiian expat, James (Kimo) had unpainted for a few decades. I picked it up yesterday when I dropped off the Poniatowski figure. Jim has mass quantities of unpainted lead - from 15mm to this 77mm (approx.) figure. It looked so cool sitting on the shelf that I told Jim I'd like to paint it up for him - to which he agreed. So here he is after simple block painting and staining with Minwax - and highlighted over a Testors Dullcote finish. 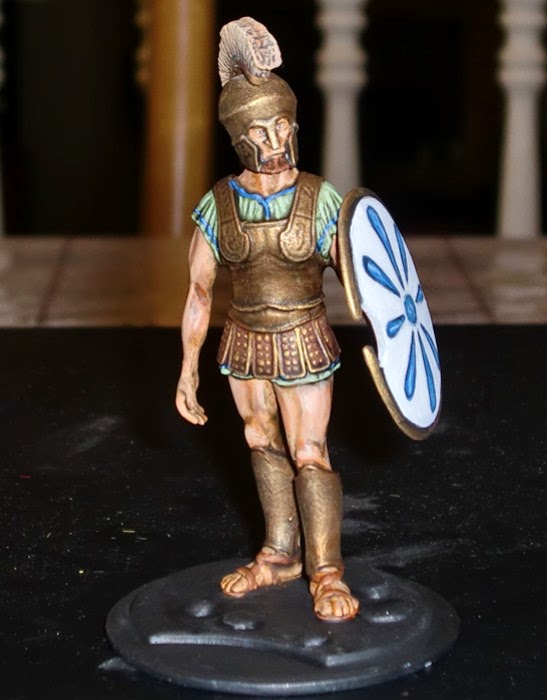 Series 77 was a leading military miniatures company back in the day. Although by today's standards, it lacks some of the more intricate details of modern sculpts - they have a charm all their own. The two-tier base was/is a trademark of the line. I'll let Jim finish the base - as well as adding the sword and scabbard which he couldn't find yesterday. 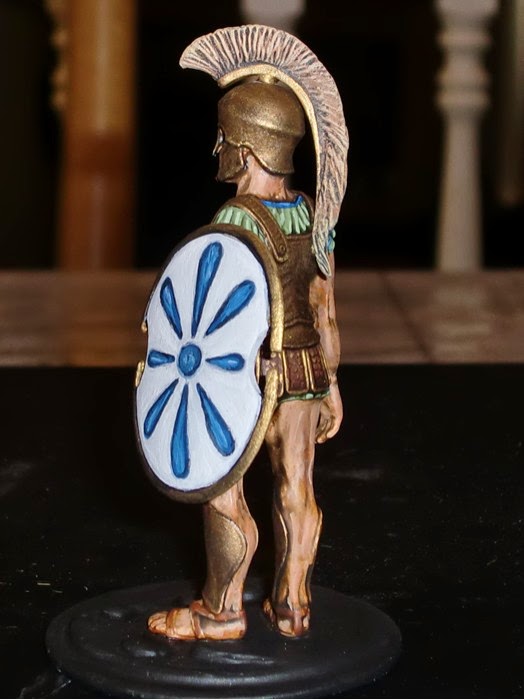 The helmet is of the type called (by modern-day historians) Chalcidian. It is similar in appearance to the fully enclosed Corinthian type, but with separate check pieces. The shield is the Boeotian type with cut-outs at each side. 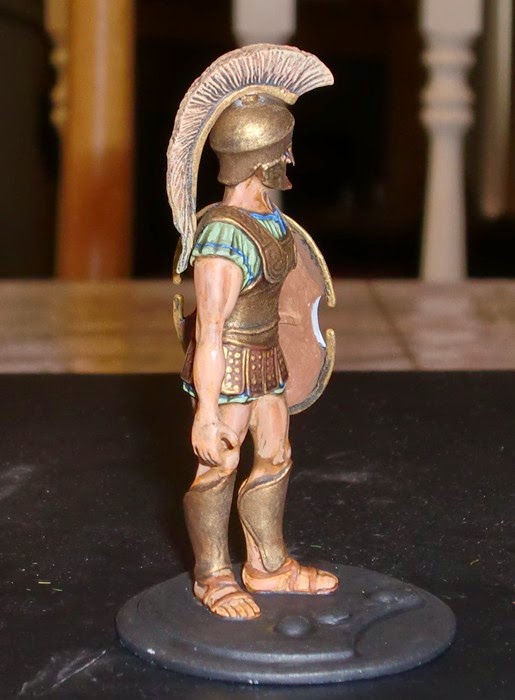 The picture below shows the figure amongst a couple of 120mm resin figures, as well as a 100mm Spartan to which I added extra limb and groin armor; a 28mm 1st Corps Hoplite is also placed next to them for scale reference. 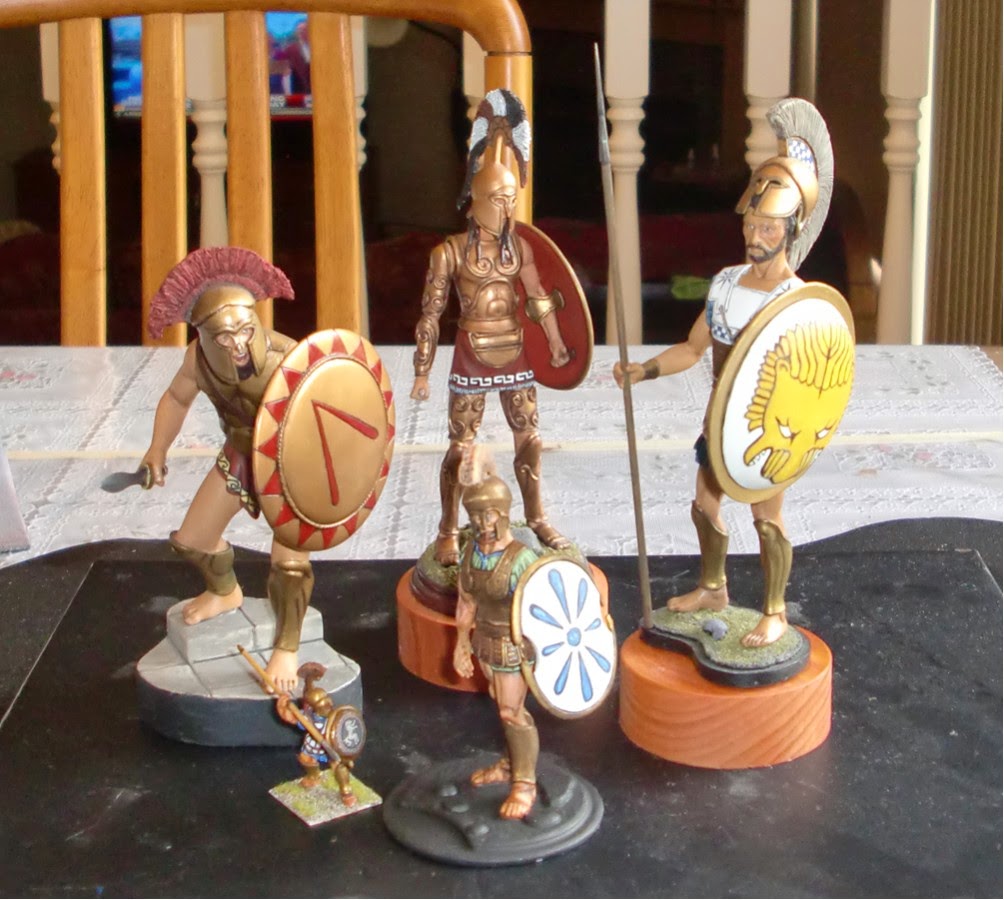 Prince Józef Antoni Poniatowski, Marshal of the Empire in 75mm

Painted this figure up today for my fellow ex-pat Hawaiian buddy, James (aka Kimo). It is a 75mm metal figure which he must've had for sometime, as the manufacturer - Chota Sahib, has been out of business for decades. It's a nice enough figure, but I found some of the details, like the lacing on the collar and cuffs, sculpted in rather low relief. In fact, some 28mm figures have details easier to pick out with the brush. I ended up giving it a quick block paint job followed by Minwax staining. After I sped up the drying process with a hair dryer I gave it a shot of Dullcote and gave it some highlighting and details. It ended up pretty nice and have no problem letting Kimo know it's done. 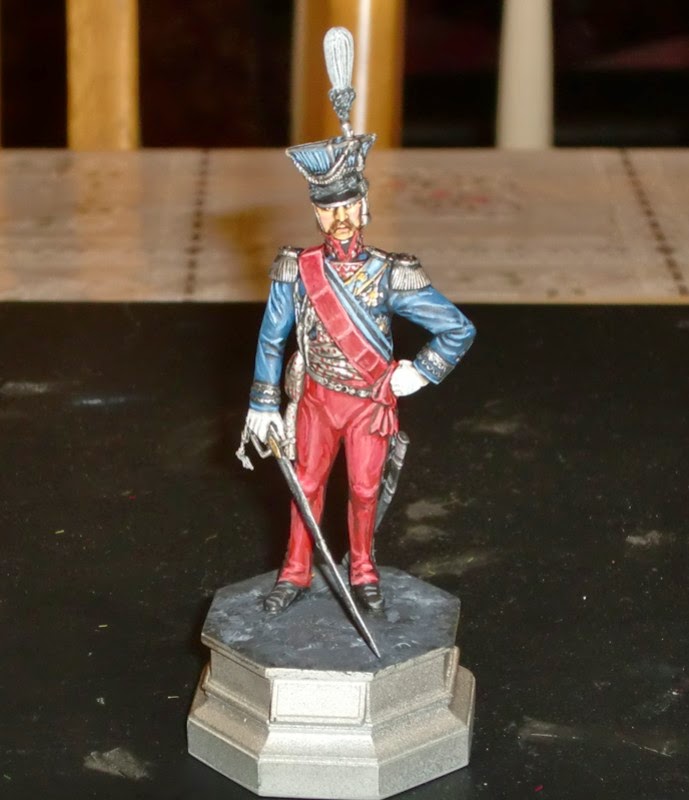 The prince himself was quite an interesting character and lived up to his noble heritage. As a youth he served as an Aide-de-camp in the war against the Ottoman Empire. He eventually served under Napoleon and survived the Russian Campaign. He was made a Marshal of the Empire for his heroism at the Battle of Leipzig. While covering the retreat he drowned while attempting to cross the White Elster. 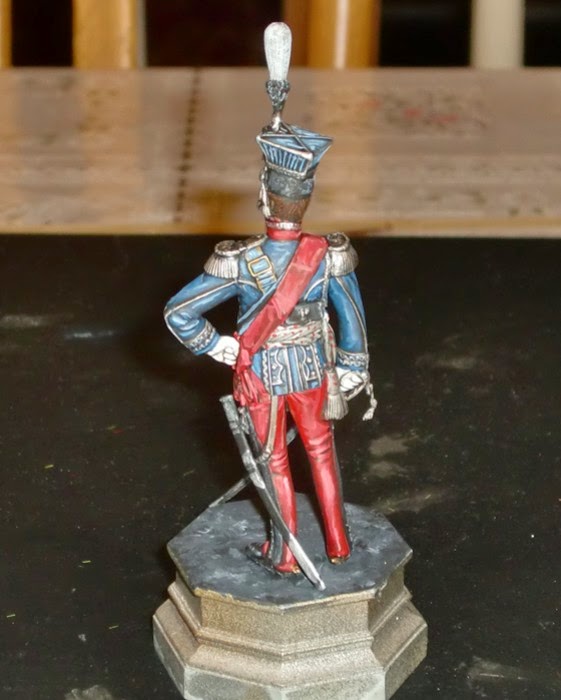 This is what the figure looked like prior to staining; a fairly simple paint job with only a few colors. Note the broken blade; fixed afterwards. 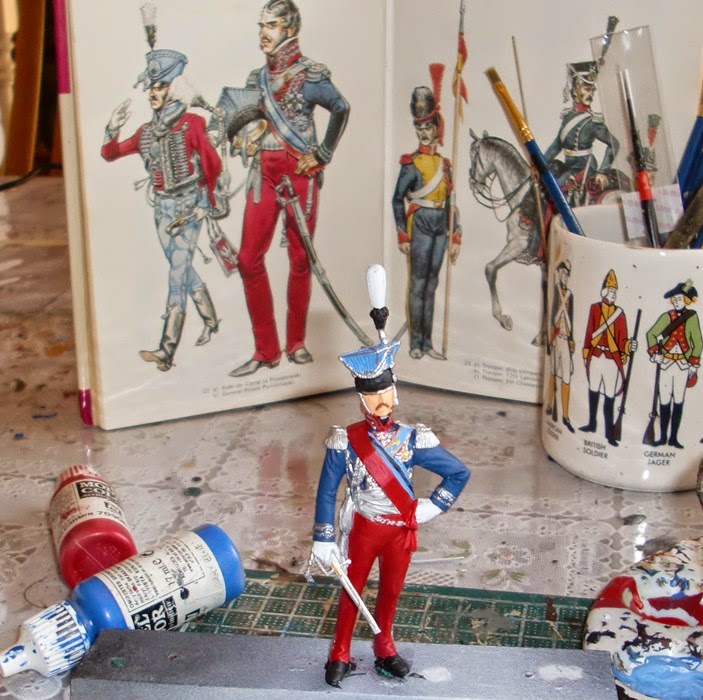 A lot of the details were clarified after the staining. 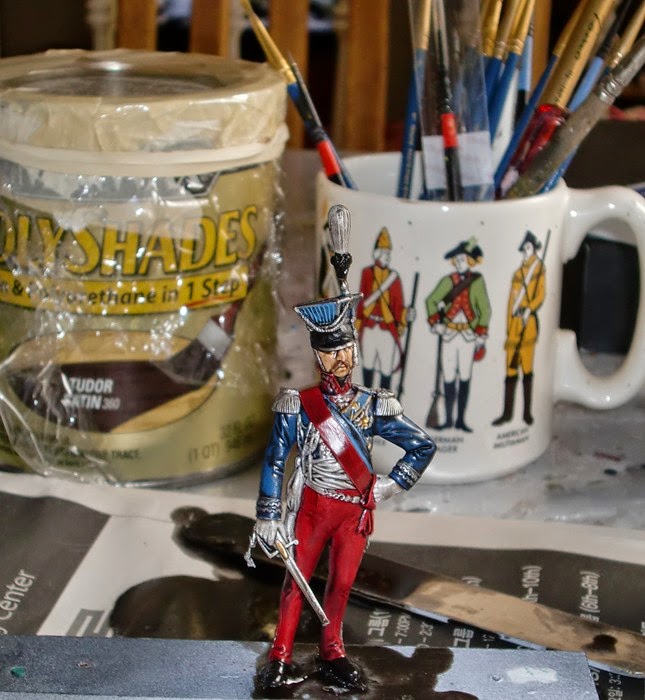 Finally, here he is next to 28mm Front Rank Dutch Lancers and a 120mm Verlinden Polish Lancer which were painted several years ago. 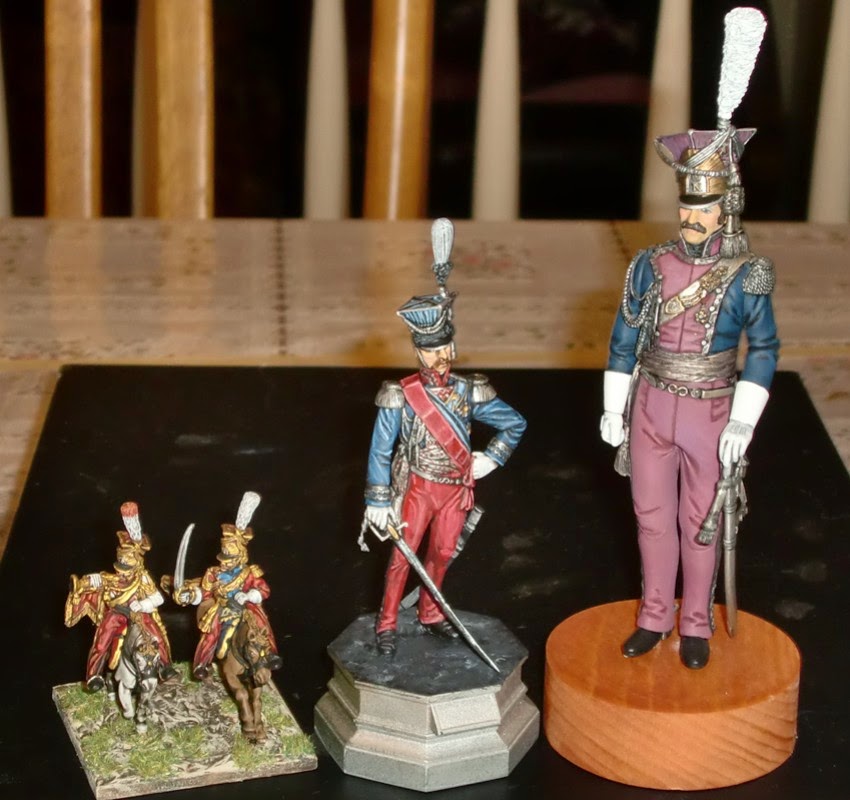 Played out a scenario loosely based on the last battle in the movie "The Last Samurai." Slightly modified Bolt Action was used for the game with very good results, in my opinion. It played out fast and felt fairly balanced - even though the rebel Samurai forces were without modern weapons. Indeed, the only missile weapons they had were bows with 18" range versus the Imperial troops 24" rifle ranges. The Imperial troops also had two cannon with 36" range and two Gatling guns with 30" range. As the latter weapons were on a bluff they could fire over their own troops most of time.
The game was called before starting Turn 6 - which would likely go to the rebels since they had most of their units still intact - including several bow units. Although there was also the chance the Imperial guns could've inflicted enough casualties to prevent this. Again, I was very pleased with the way Bolt Action's core rules adapted very nicely to this scenario with "Natives" lacking firearms. The previous blog post has a copy of the draft rules which were used.
Posted by DeanM at 5:52 PM 34 comments:

Dances with Samurai - Set Up

Fielded the troops for this scenario based loosely on the final battle scene from "The Last Samurai Movie With Tom Cruise." The Imperial troops have somehow surprised the "rebel" samurai at their fortified village. The samurai (and ashigaru) are in the process of reacting to this by streaming out of the village in clusters. Sparse woods provide a little cover for the samurai from the artillery and Gatling guns atop a small bluff overlooking the village. 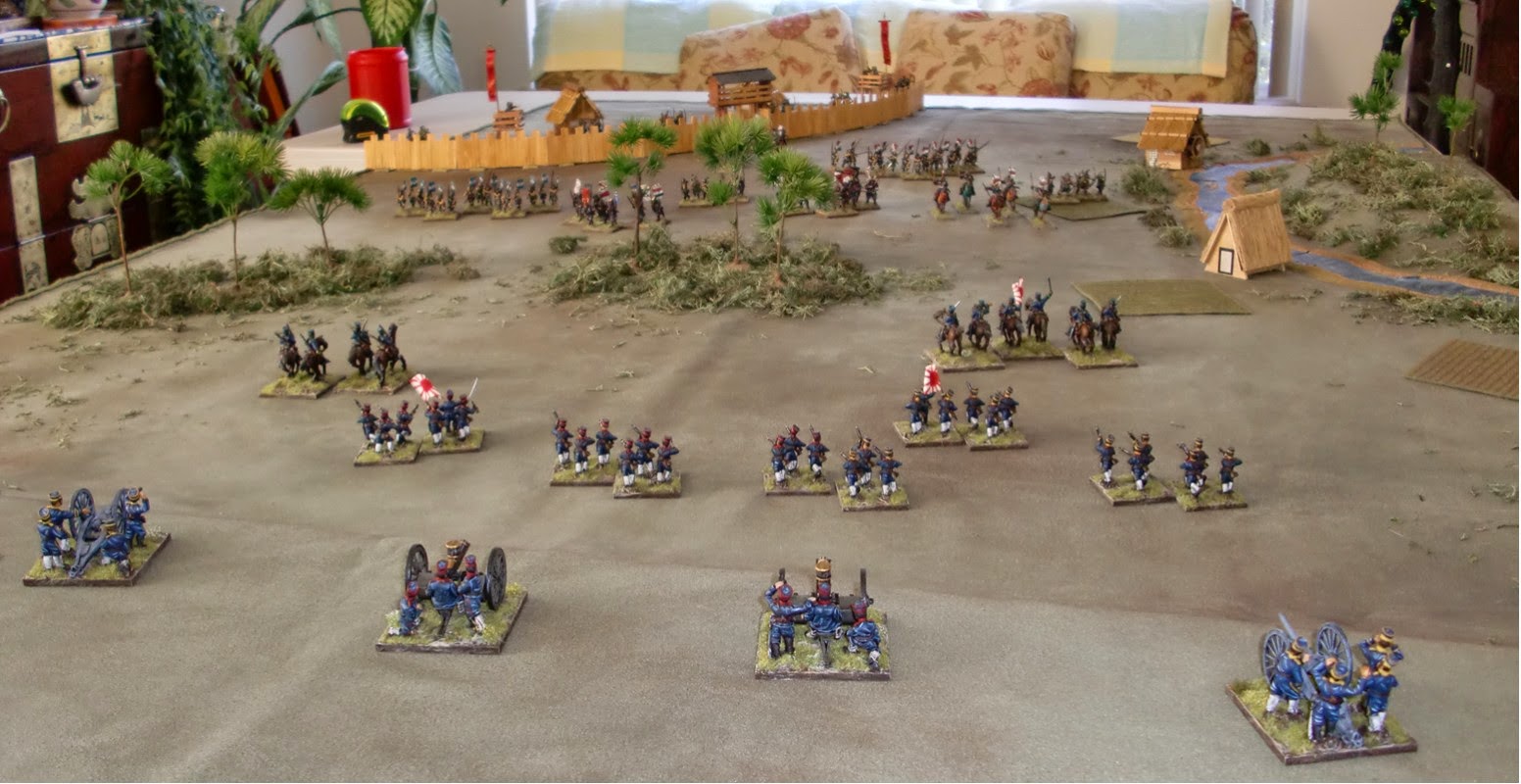 These are, of course, staged shots, prior to the actual play test, but I find it useful to see how the troops and terrain can work together prior to the game. I plan to try it out with modified Bolt Action rules. As mentioned in a previous post, it should also work with Black Powder or Hail Caesar modified. 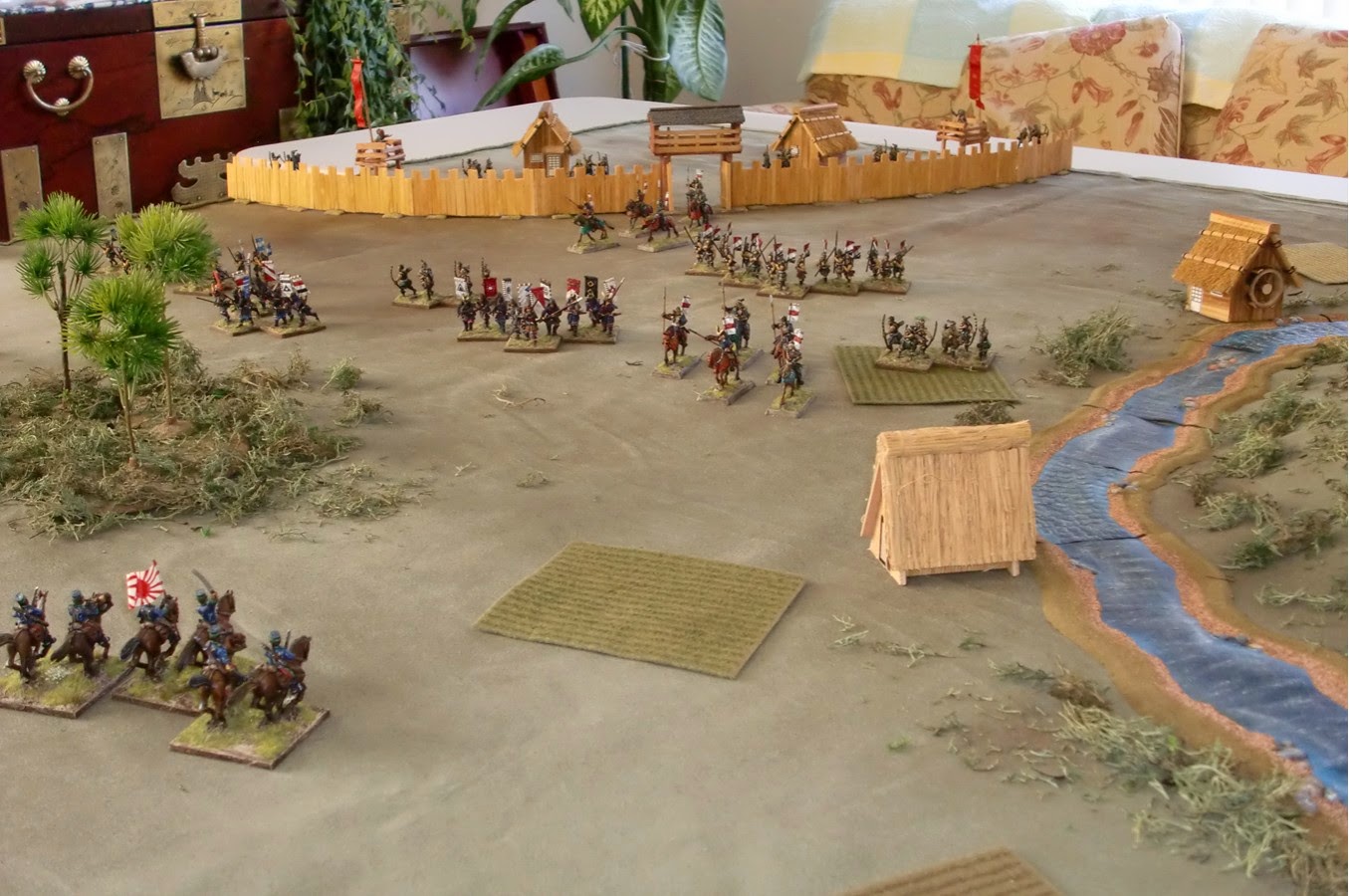 Although there are less Imperial troops than samurai, their fire power, notably the artillery and Gatling guns should balance the game. The only missile weapons the samurai have are bows, but their spear armed brethren have two attacks each in close combat. They are also harder to wound (or Damage in Bolt Action terminology) due to their skill and armor. 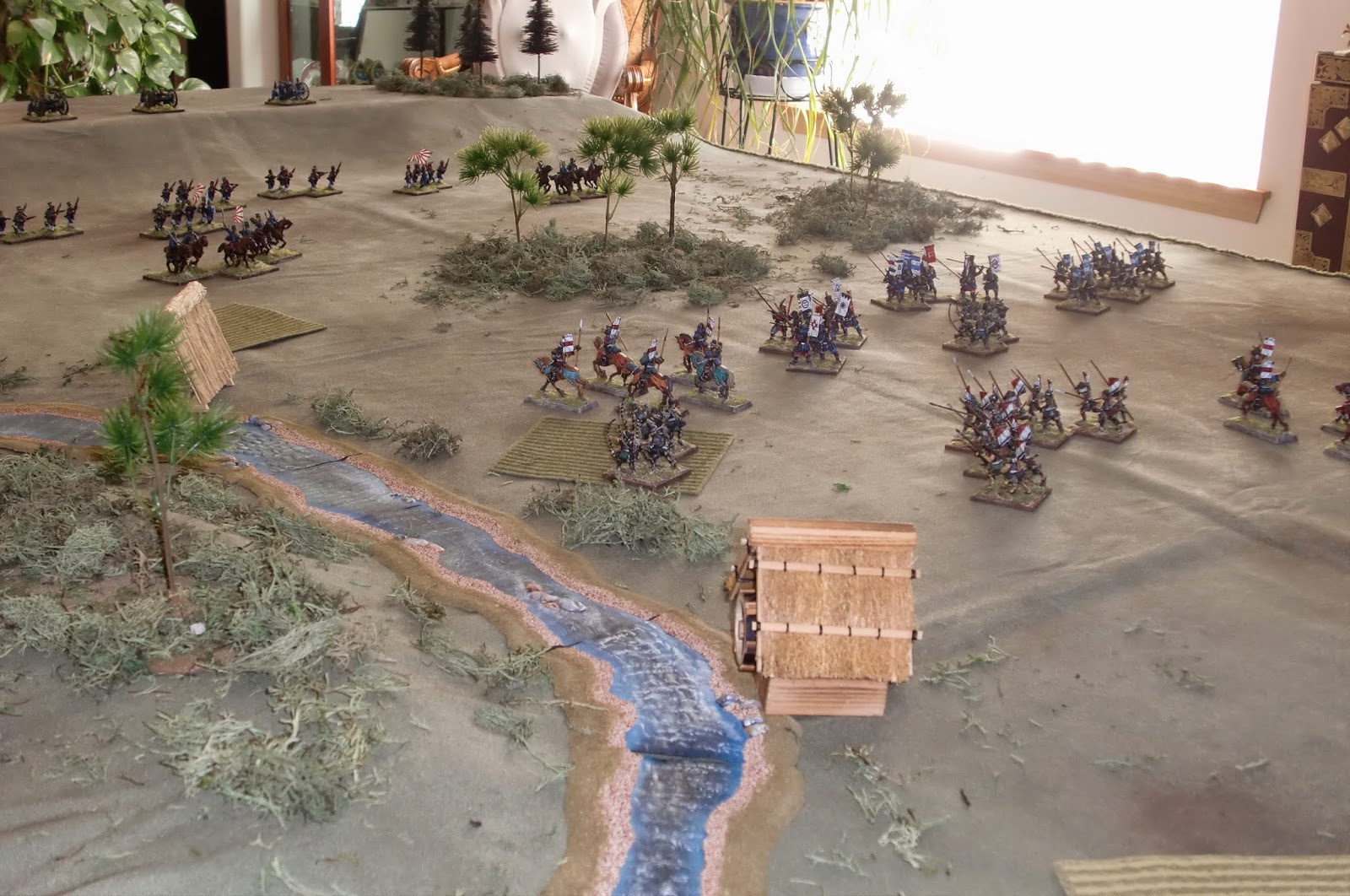 The samurai units are larger to hopefully buffer the expected casualties suffered from Imperial rifle fire prior to engaging in hand to hand combat. 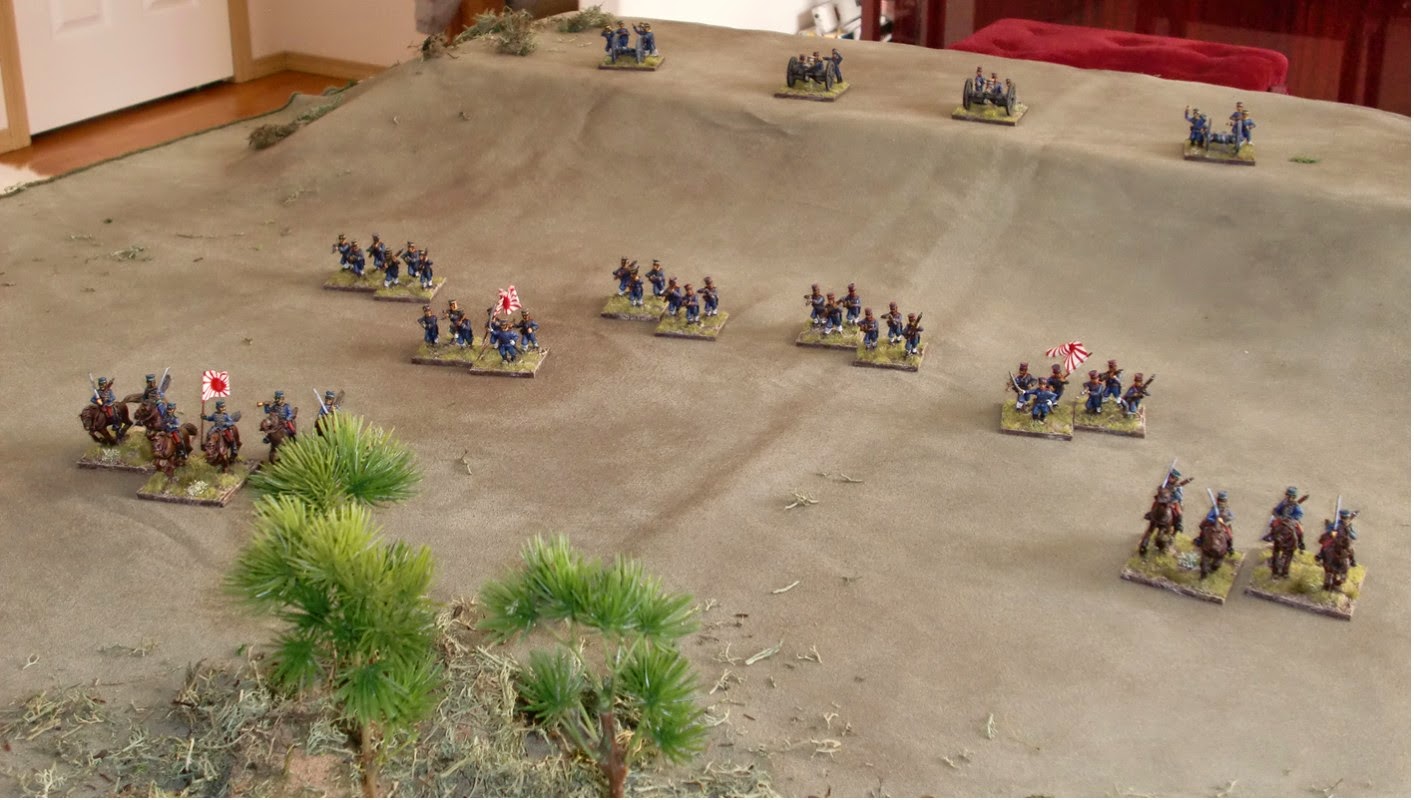 Hopefully the Imperial artillery and Gatling guns will be effective prior to the infantry and cavalry contacting the samurai. 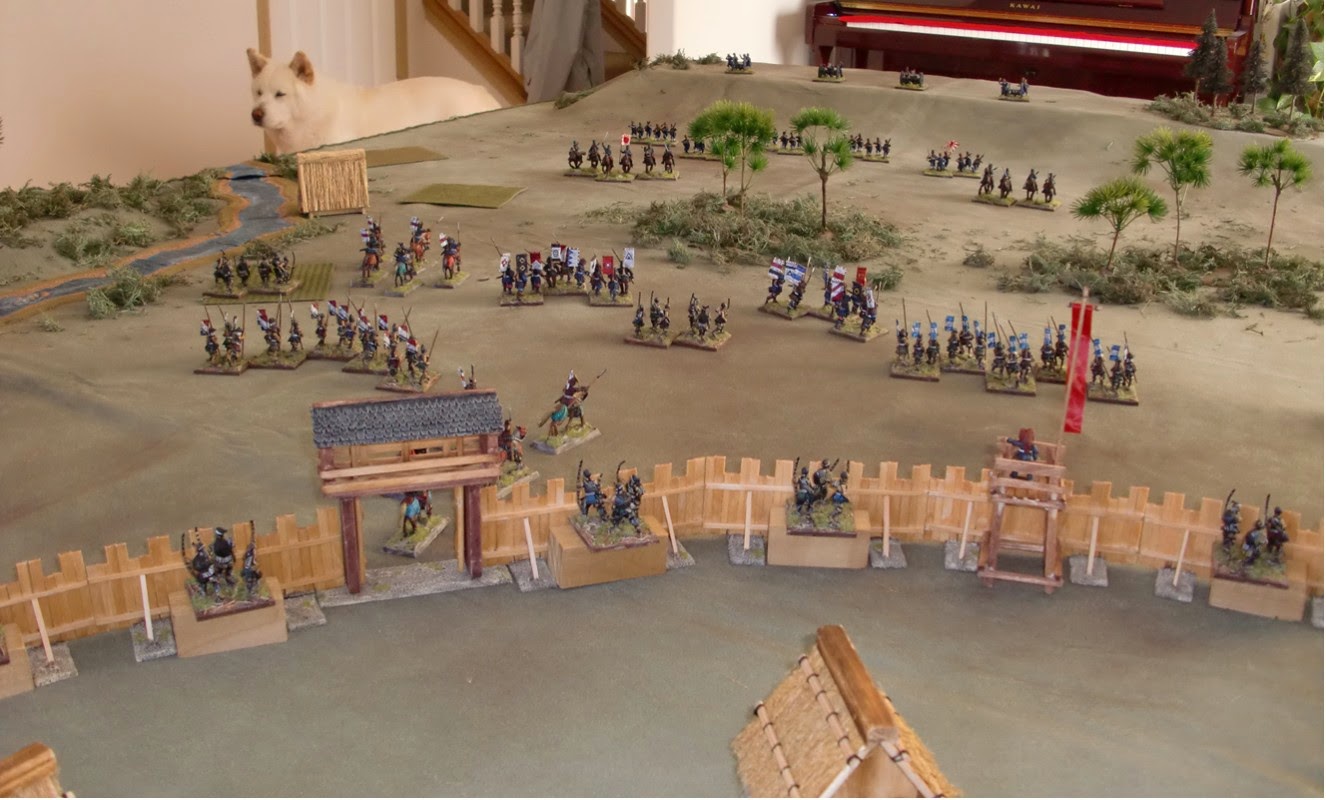 An update after the play test will follow. Until then, I've added the draft Bolt Action and Black Powder QRS's (both modified & simplified). 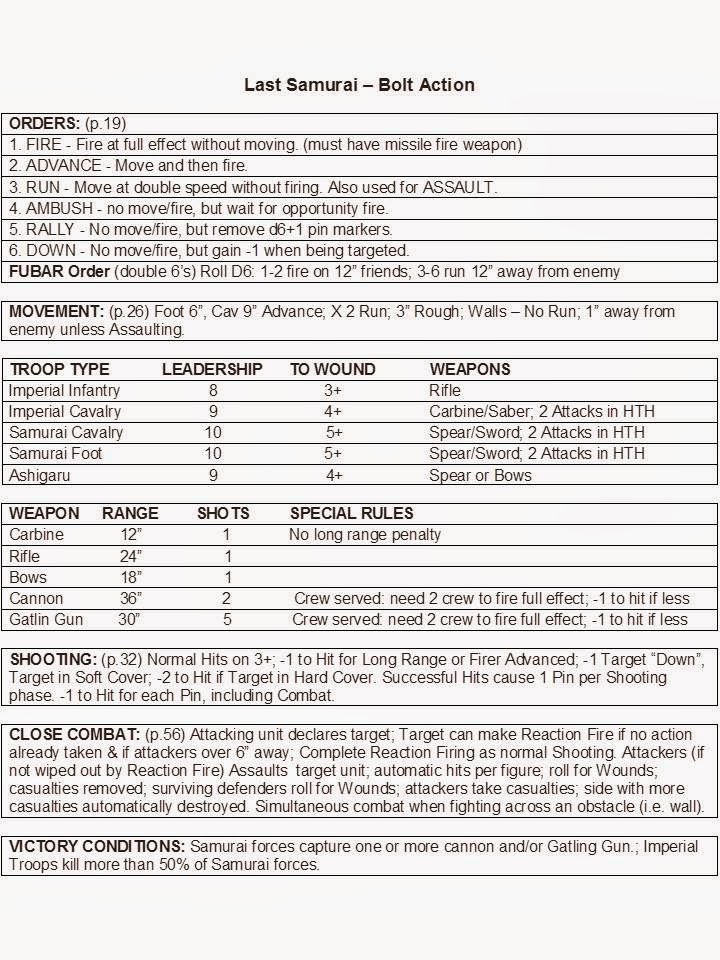 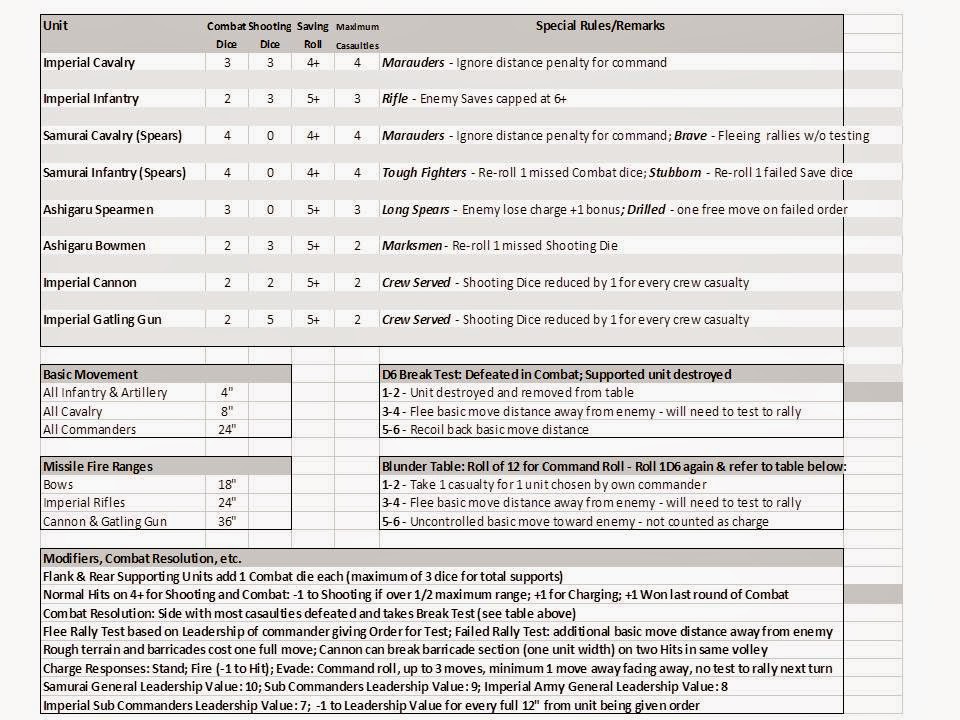 A couple of Gatling Guns for a Last Samurai scenario. The guns are from Black Tree Design's Zulu War range. The sitting figures have their heads replaced with those from Old Glory's Boxer Rebellion range. The rest of the figures are also from Old Glory - spares from the Artillery Crew set.

The magazines on top of the gun are the Broadwell Drum type introduced in 1872. However, the type shown in the movie are vertical box magazines.

Hollywood" accuracy" aside, these BTD guns were 25% off, so I couldn't pass them up. They arrived surprisingly fast too - only about 3 days after I ordered them from Texas.

Perry makes some nice Gatling Guns too, but they are a bit more expensive, and I wasn't too stuck on high-quality as the OG figures are a bit crude anyway. They were painted up very quickly and given a Minwax stain, followed by a finish of Testors Dullcote. 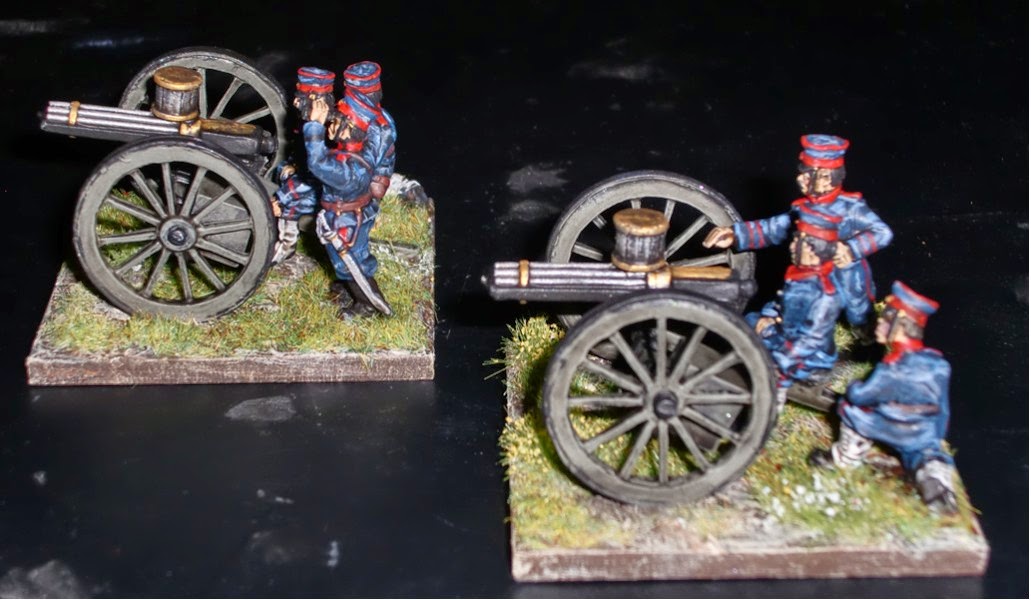 Although Black Powder would work very well for this period, I don't have too many figures, so plan on trying Bolt Action for it. There will be about 12 units per side - which is how many dice I have for each side. More to follow on this.

Interestingly, two Gatling Guns were used by Tokugawa forces against Imperial troops at the Battle of Hokuetsu in 1868. The guns had been purchased from Prussian businessmen by the Daimyo of Nagaoka, Makino Tadakuni. These can also be used against my Choson Korean guys for the Donghak Peasant Revolution in 1894-95.
Posted by DeanM at 4:16 PM 27 comments:

The Battle of Toulouse - Loosely

The Battle of Toulouse. Wellington commences operations on April 10 (Easter Sunday), 1814. Soult holds until April 11, and then evacuates the city. Wellington enters Toulouse on the morning of April 12, by afternoon he hears of Napoleon's abdication. These are mostly staged shots while working out the scenario using simplified Black Powder rules - removing stuff like Shaken and Disorder which tend to make me think too hard. Basic movement and ranges are reduced, and Blunder and Break Tests are simplified to three results each. The El Perez (or El Perry) scenario in the main rule book could be followed, with the French making the retreat off table instead of the British. However, it could just as well be an attrition scenario. 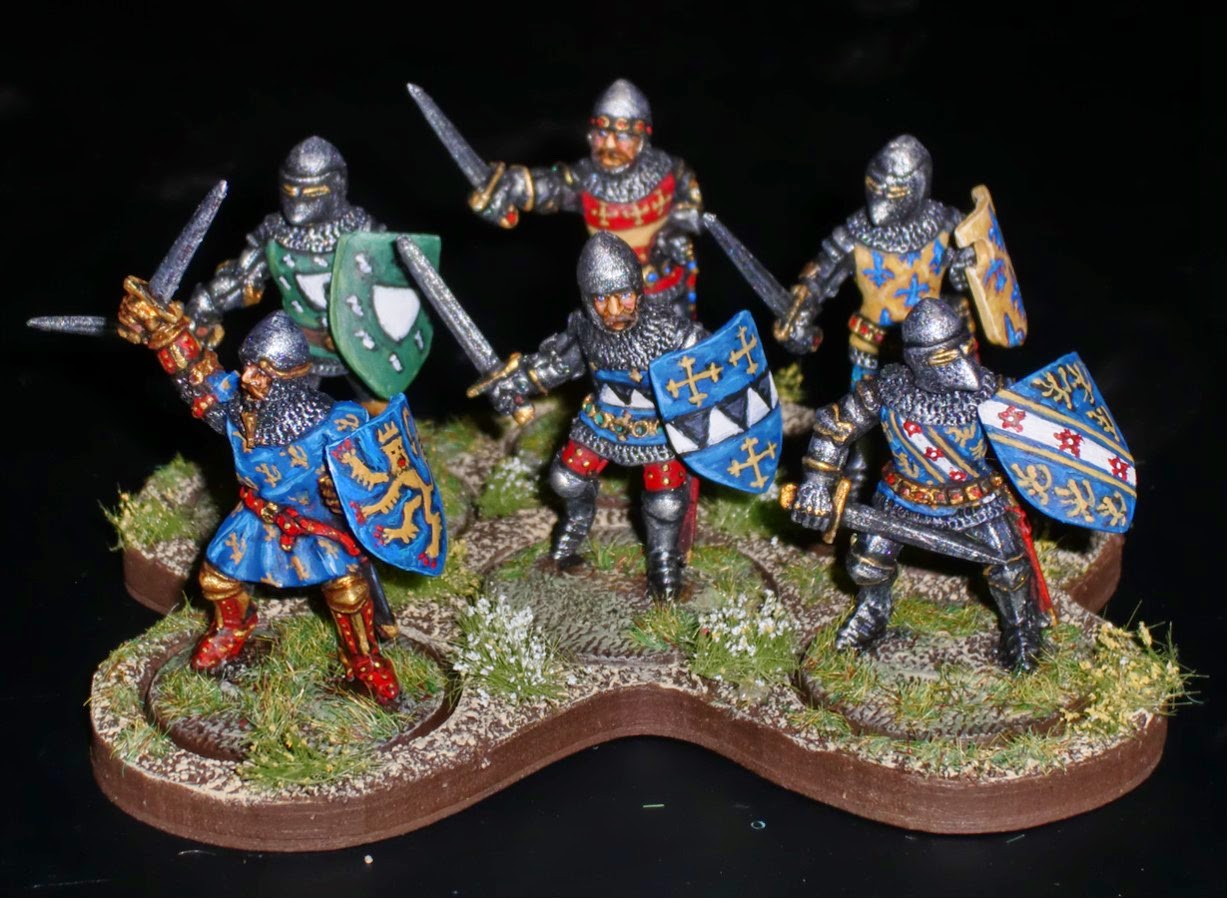 They are all on 25mm magnetic round bases from GF9; the horde tray is from Litko. 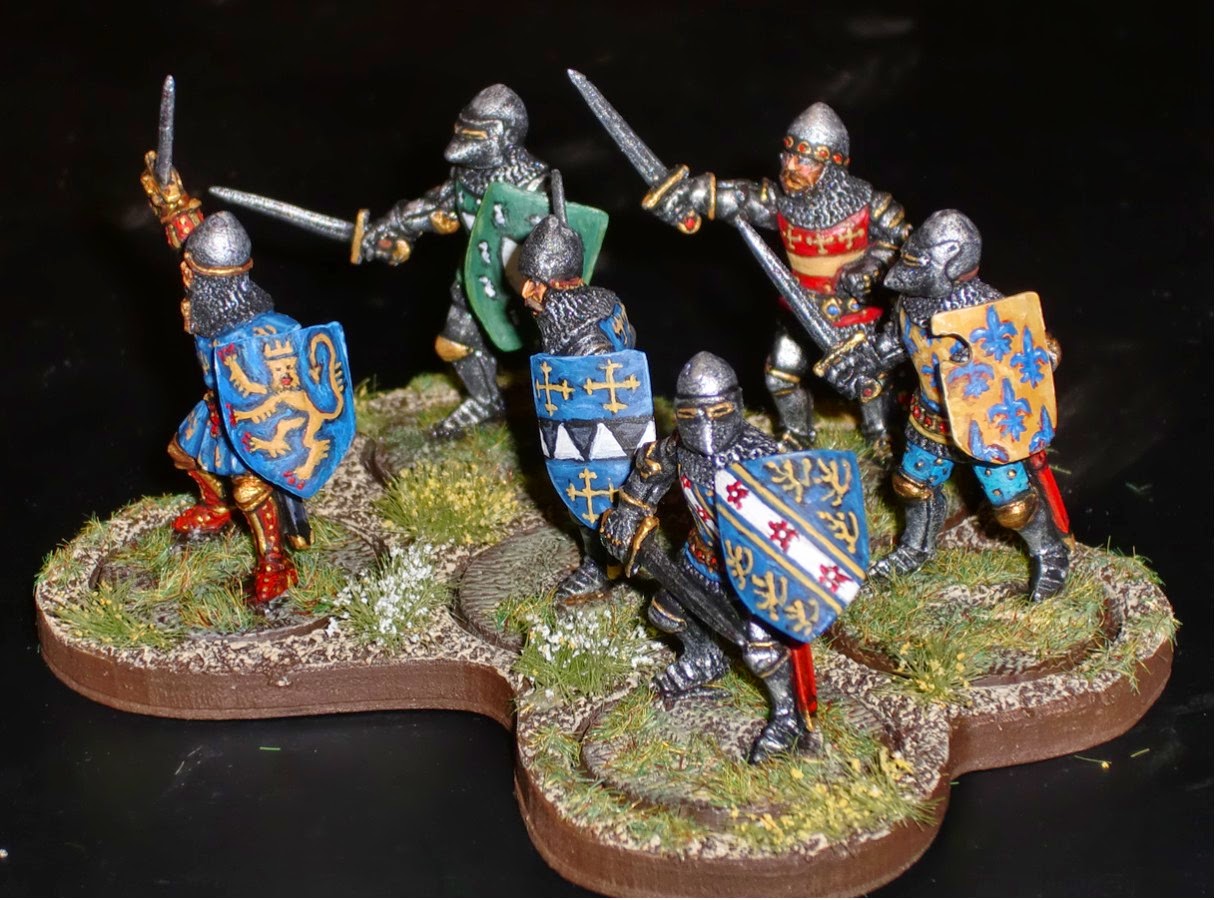 Except for the Schwarzburg figure who's from the Early-HYW foot command pack, they are all from the Late-HYW packs. Still deciding on who the six remaining unpainted knights will be. 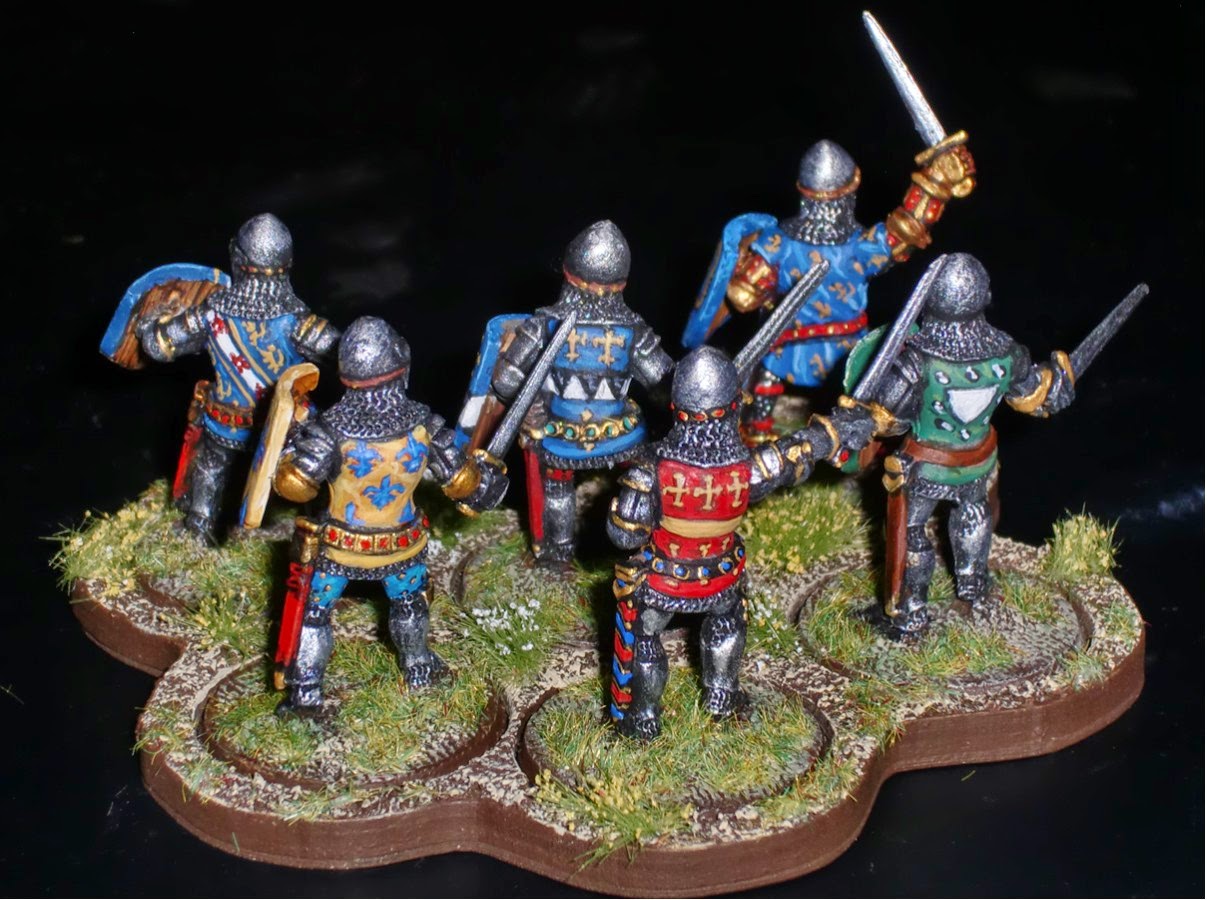