As mentioned in a previous post, this is a very nice kit that goes together well. I couldn't tell you how many rivets there are, but there's a lot of them. Here it is next to a Wargames Atlantic figure for size comparaison.

Above image shows the Mark IV next to the Warlord Games Renault FT-17 posted earlier. Quite a substantial size difference - and being from the same maker (Warlord Games), it should be "scaled" correctly 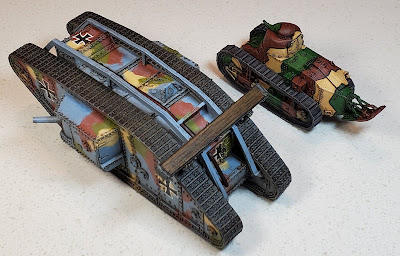 Another view next to the Renault for comparison. The Mark IV kit is mostly resin with only a few metal parts. The guns, exhaust pipe, top rails and the wood beam are metal parts.

And another comparison shot - this time with an Old Glory A7V. For the record, I used decals for the crosses on the Mark IV - which were a major pain as they were very fragile and kept breaking apart when I tried to apply them on. Thankfully, there were enough "extras" that I was finally able to get them all on. In the end it was worth it, as I didn't want to try and paint the crosses on by hand - which I did for the A7V (only 2 crosses there).
Anyway, thanks again for dropping by. Just wanted to post this as this tank was in the works prior to the Perry Napoleonic Russians. In fact, I have another tank which I was working on prior to the Russians - the Hobby Boss KV-75/76 - to finish too. Until next time, wishing you all the very best in health and hobby endeavors!
Posted by DeanM at 8:07 PM 31 comments:

Finished them up today - not the best quality painting, but good enough for the table top. This was a down and dirty project with broad brushstrokes and heavy reliance on Minwax staining.

I didn't do any highlighting after the staining as I wanted to see how they look without the effort. I have to say, massed in close ranks, they seem to look okay. The only things I did "above and beyond" was dry-brushing the grenadier plumes and adding a flesh wash after the staining to the face and hands. 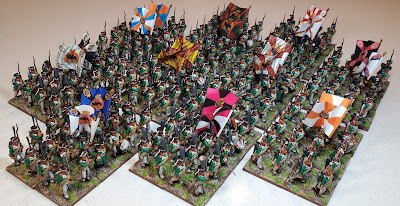 Some of the flags were downloaded from the Warflags-Napflags website - which I've been using for many years; so happy to see it's still up and running.

Speaking of the flags; besides the one for the Pavlov Grenadiers, the rest were used mainly because I liked the pattern and colors. I even used the one from the Perry box that is supposed to be for a Marine regiment. 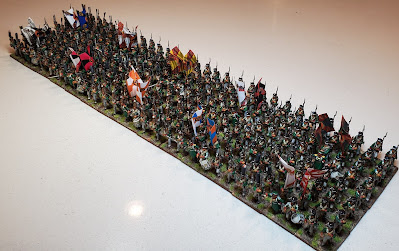 Still have two cannon and the three mounted commanders from the Perry "deal" to work on. Thanks for stopping by the ol' blog and wishing you all the very best.
Posted by DeanM at 6:54 PM 53 comments:

Yes, all of the basic painting is done. Fun Fact: I painted about 1,400 buttons - most of these on the cuff flaps (3 per sleeve) LOL! Plan to stain with Minwax Tudor Satin stain tomorrow.

In this short space of time, I've learned a bit about Russian Napoleonics. For one, they had different colored flag poles for different regiments - and the colors changed a couple of times in this period.

After the staining, I'll go back over and touch up stuff if needed, but since they'll be in rank and file formation, shouldn't be too bad. Until next time, thanks for stopping by and best wishes to you all.
Posted by DeanM at 8:46 PM 28 comments:

Still need to paint the buttons on the jacket, including cuff flaps. The command groups also need work - particularly the musicians. After the uniforms, muskets will be painted, as well as most metal parts - including the Pavlov's mitre faceplate.

Just wanted to update the progress on these figures. Again, very, very basic painting which will be given the Minwax stain treatment. Thanks again for stopping by and wishing you all the best.
Posted by DeanM at 9:57 PM 21 comments:

Just a quick update; painted the flesh (face & hands); brown for the hair and mustaches on the grenadiers; black for the shakos, grenadier plumes, shoes, backpacks, sword/bayonet scabbards, as well as undercoating the bayonets and mitre plates for the Pavlov guys; and also had to painted the green coats - to inspire me :).

So far so good; production-line block painting. Next will be the white (silver for officers) shako cords; gray-brown for the greatcoats; red for the cuffs, collars and turn backs; brown and gun metal for the muskets and metal parts - shako plates, officer swords, sword hilts and scabbard tips, etc.

Just wanted to post this as I may not be able to get to them until the weekend - back to the salt mines tomorrow. :) Wishing you all the best in health and hobby endeavors!
Posted by DeanM at 8:54 PM 22 comments:

Managed to put together and prime 10 24-man battalions. Of which, three are combined Grenadiers battalions - one each in 1809 and 1812 kiwer, and one Pavlovski as well. The other seven line infantry battalions are in both kiwer as well (3 in 1809 and 4 in 1812). Most will be in summer white gaiter-trousers; but I might paint a couple up with winter black gaiters for variety-sake. I'm still debating if one will be Jaeger in winter uniform with green trousers.

Just wanted to post a quick update to show you where I'm at on this project. Best wishes to all and hope you all are having a great start to 2021.
Posted by DeanM at 4:03 PM 22 comments:

Actually, I don't have a workbench per se, as I just use our dining table - which also doubles as my telework desk too. Anyway, just wanted to post a quick update to let you all know what I'm working on for the start of the new year. First up the Warlord Games British (captured) Mark IV tank needs finishing up. 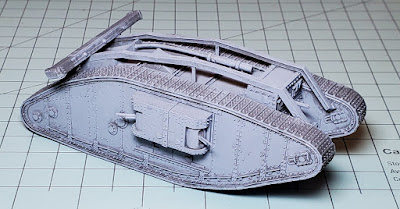 So far, just dry-brushed a light gray-blue over a darker gray undercoat. A little bit of camo will be added, as well as crosses - once the decals arrive (hopefully, they'll fit as they are for 1/72nd aircraft).

Also, an ebay purchase of a 1/48th Pz.Kpfw KV-1 kit by Hobby Boss. A first by me with this manufacturer (made in China). It went together very nicely with few parts; similar in quality and build to Tamiya, IMO. 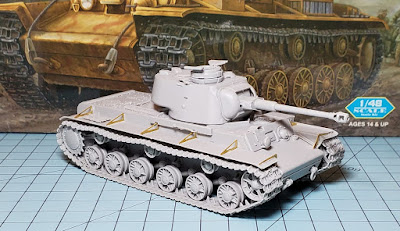 I cut the commander's hatch down the middle to have them opened, as I plan to add a figure there later. As you may see, there are also some brass parts included. The tracks are multi-part (like Tamiya kits), and nicely detailed with realistic sagging over the support rollers.

Finally, the start of a Napoleonic Russian army. The Perry Miniatures Russian Brigade Deal arrived yesterday. Incidentally, I placed the order on Dec 29, and looks like it was shipped just last Friday via DHL. It was tracked and only took 4 days to arrive here in Washington State - the left coast of the USA. Pretty impressive! And this was "Standard" shipping too. 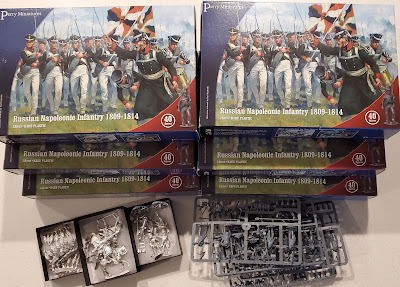 As some of you may know, the "Brigade Deal" comes with 6 boxes of infantry - 240 figures total; and also 3 mounted metal commanders and two cannon/crew. However, one of the cannon was missing, so I sent them an email which I'm sure they'll end up sending me the missing item. I also added Pavlovsky Grenadier heads and 4 separate command sprues. I plan to have 10 24-man battalions; one of which will be Pavlovsky Grenadiers, one Marine, one Jager and the rest line infantry wearing a mixture of 1809 and 1812 kiwer. I will need to pick up a few more flags, as the set only comes with flags (2 per unit) for 4 different regiments. I can use most of them as there is a "Colonel's" flag on each sheet which can be used for one of the units, and another unit with just the two regimental flags. Makes me realize how much easier it is to "flag" French units.
Thanks again for stopping by and wishing you all a great start to the new year!
Posted by DeanM at 9:06 AM 18 comments:

Finished up painting the tank - had to use a Frenchman from an earlier era for scale as I don't have any WW1 French figures yet.

It's a great kit with minimal parts that go together nicely. The track assemblies for each side have pegs and holes in the body for easy placement. 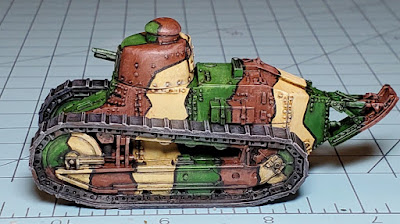 A wash of Future floor wax with some Vallejo ink/stain was used over the whole tank. I went over the rivets and seams for a deeper stain. 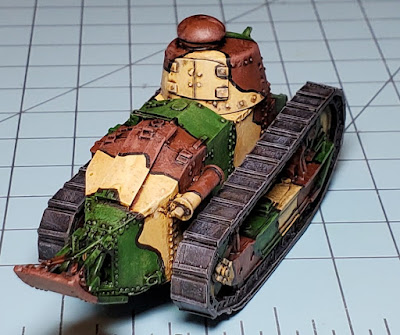 The tracks are finished fairly clean, with no mud or debris one them. Way too clean for the battlefield, but I tend to keep weathering to a minimum. The exhaust should probably be rusted/corroded too. 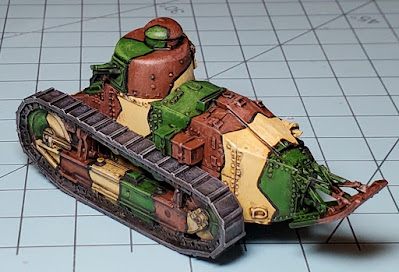 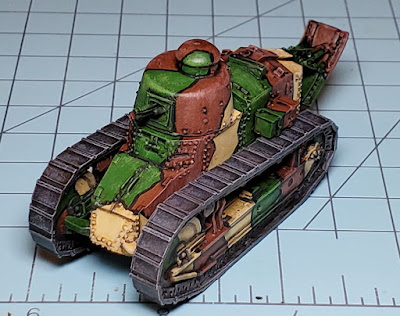 Again, a top-notch resin and metal kit which I can highly recommend. 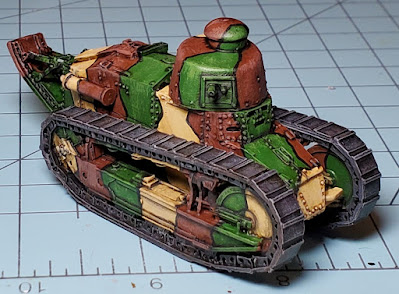 The British Mark IV is next, but am awaiting the arrival of some decals for crosses before starting on it.
Another out-of-period scale/size comparison below: 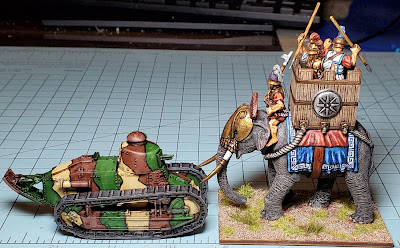 Thanks again for dropping by the blog, and wishing you all the best for the new year.
Posted by DeanM at 6:14 PM 34 comments:

Just a quick update on the FT-17. Did the basic camo. 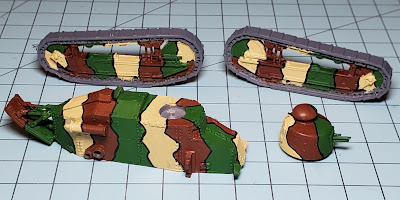 There were various camo patterns, as well as colors used. The FT being so tiny,  I didn't want to overwhelm it with colors, so only used three. 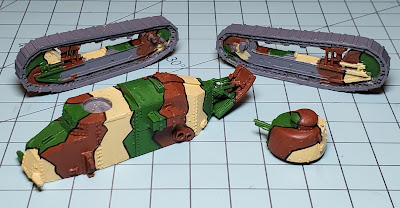 After painting the tracks, weathering will follow.  Thanks for stopping by and wishing you all the best.
Posted by DeanM at 7:52 PM 11 comments:

Worked on these fine Warlord Games resin and metal kits today; an FT-17 and a British Mark IV. Check out all of the nicely detailed rivets.

With a couple of 28mm Wargames Atlantic figures for size comparison. That FT-17 must've been a tight fit for the two-man crew.

Great sculpting and clean casting on both of these. Just a few metal parts that went together without issues. The FT's turret and the Mark IV's guns can rotate. 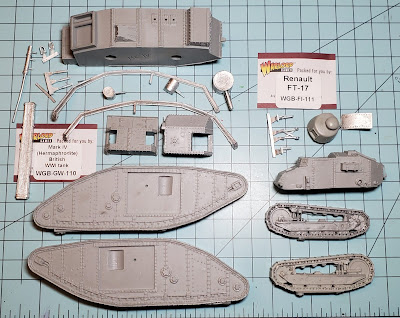 Very few parts, and they went together very well. As they came without instructions, I had to refer to pics on the Warlord Games website to make sure how they went together - also the line drawing of the FT-17 below for the rear skid plate assembly. 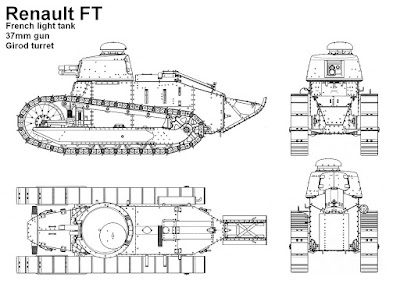 I plan to paint up the Mark IV as a German captured tank like the one below. 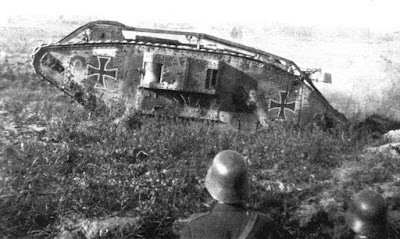 Hope you all are starting the new year off nicely, and see you around on the blogosphere!
Posted by DeanM at 9:24 PM 30 comments: