Here are the foot (less the fully plate-armored guys), with a Minwax Tudor Satin stain applied. They'll get a shot of Testor's Dulcote and some highlighting. Basing will be done after the livery badge decals are applied. Just wanted to show the nice detailing the staining accomplished.

Finished block painting all of the grunts, at least the ones not in full-plate armor. They'll get the Minwax treatment later today after the paint sets.

Perry Wars of the Roses Infantry AND Foot Knights - WIP

Just a quick post to show you all that I haven't given up on this project - the first one in some years. Started block painting the the infantry, and also glued together the foot knights. Swapped some of the arms and heads from the two sets. I ended up painting the foot in very uniform colors - probably way more than historically accurate, but I wanted them easily identifiable as belonging to the same units, as well as simplifying the color scheme. Also ordered some livery decals from both Dom's Decals and Citadel - only realizing after placing the orders that a lot of the infantry have padded jacks or brigandines which don't need badges - oh well, they were fairly inexpensive. 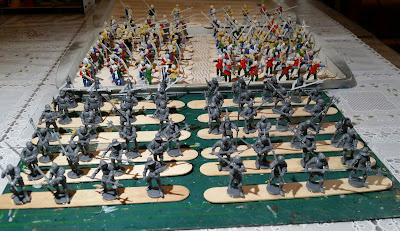 The Foot Knight set has some great figures and poses, however, some of the helmeted heads appear a bit on the smaller side. The helmeted heads for the command figures in the Infantry box are actually nicer - and I used them on the knights. Oh, there is also a very nice Richard III figure with crowned sallet that will be painted separately at a later date. Hope to get the infantry done this weekend - managed to pick up a can of Minwax Tudor Satin which has worked wonders in the past. Best to you all!
Posted by DeanM at 8:15 PM 23 comments:

Here are 108 of the 120 infantry from the three box "Yorkist Battle." The other 12 figures are the command in plate armor and will be painted separately - probably using a can of silver spray paint followed by ink wash. There are 60 archers and the balance with pole arms (including the command figures). Although the ratio of bow to bill was historically higher in period armies, I wanted more pole armed troops as the scenarios I envision using them in will have more melee than missile fire. In fact, a box of 38 Foot Knights will be added, and also a box of 12 Mounted MAA. These will be the core troops for the First St. Albans scenario. I also plan to add a box of Light Cavalry and some mounted personalities for a Bosworth scenario. Both will use Lion Rampant for the rules. Anyway, thanks for stopping by and I best get these figures primed. 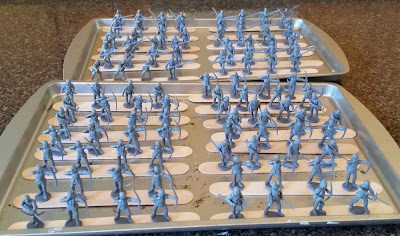 Rebasing Completed - A Third Post in a Day Ridiculousness

Having not posted stuff in months, here is a third post on the same day! What the...? Anyway, now that this rebasing project is done...which was just to pass the time until the Perry WotR plastics arrived...it's time to get serious. In fact, I washed the 3 boxes of WotR Infantry and plan to start putting them together tomorrow.
Had to also show off the new Vallejo Paint Rack as well as the 16 new bottles from the Vallejo Intro pack. The older bottles of Flesh and White to their left on the second tier. The top row fits the craft paints I forgot I had. The rack fits about 50 or so Vallejo/Reaper bottles. Don't think I ever had that many, although the empty holes make it tempting to fill. That said, I normally just mixed paints for different shades.
Posted by DeanM at 10:30 PM 22 comments:

Well the box from the Perrys arrived today - after returning home from a sunny picnic lunch on Puget Sound with my wife and our little pooch. God is good! 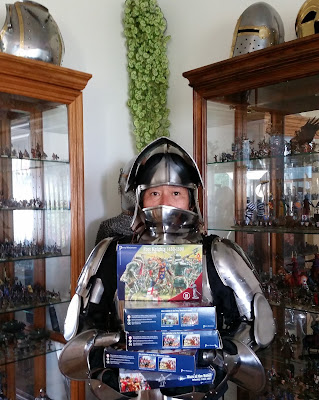 As my order included an "Army deal" of Yorkist "Battle" I also got a pack each of metal foot command and artillery.
Posted by DeanM at 3:14 PM 14 comments:

Easing Back Into the Hobby - New Stuff and Rebasing Old Stuff

Still waiting on the 5 boxes of Perry plastic Wars of the Roses figures ordered about a week ago. In the meantime a Vallejo Game Color "Intro Set" as well as an actual paint rank (again a Vallejo product) arrived ahead of them.
Also ordered some movement trays and more bases from Litko. I committed to participating in a Lion Rampant game day in September, and plan to use my as yet untried English Hundred Years War retinue. As I hate moving single figures - even in skirmish games - the 3-figure movement trays should be perfect. In fact to have them match the trays, I rebased the figures onto the stands that came with the trays. I also switched their former GW-style bases with some other figures - 13th C. knights used as Early-Holy Roman Empire troops. Re-basing figures is a sure sign that I've relapsed into the hobby. Hopefully the next post will be with the Perry plastics. Until then, best wishes to you all!
Posted by DeanM at 8:59 AM 23 comments:

Achilles Rampant or a Feeble Attempt at Reviving this Blog

Thanks to my recent (last Memorial Day weekend) attendance at our annual historical gaming con, Enfilade!, my interest in historical gaming has been re-kindled. As mentioned in my previous post, I ran my old Siege of Haengju game in four gaming periods. It was four more games than I had participated in for the previous 12 months. I ended up really enjoying GMing the games and started to think about what to host for next year's con. Having sold off over half of my collection, I thought I'd use my remaining figures - and thought it'd be great to pull out my Trojan War figures for a version of Lion Rampant. I drafted a set of rules that would be convention friendly and formed up "retinues" - I think calling them warbands are more appropriate for this period. To get in the mood, I took these staged shots.
I modified the rules to allow 2" minimum distance between units, as well as limiting dice to 6 for full strength units and 3 dice for under half-strength. I envisioned this to make the game a little less deadly and allow the game to be played a bit longer as the gaming periods are 4 hours each. Also, as I don't plan on adding more figures to this collection, I fudged the number of some of the skirmisher units - basically giving them full strength at whatever they start the game with. Since I had an odd number of chariots (15), one has a unit of Chariot Runners with it. Oh, and there are several 3-figure Hero units - a sort of take on the adaption of the rules with Dragon Rampant. Here are the draft rules: 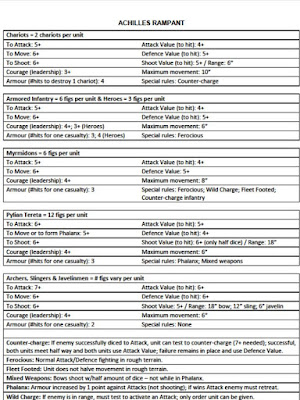 Before I could get a play test in, I decided to run the First St. Albans game for the con next year. The only problem is I sold off my War of the Roses figures last year. Just this morning I placed a rather large (for me anyway) order from the Perry Bros. I will have close to 200 figures to paint up - once I order some paint that is, as I threw away all of the few bottles of Vallejo I had thinking I'd never paint again. More to follow. And a sincere thank you for visiting my resurrected blog.
Posted by DeanM at 9:33 PM 42 comments: