How to Convert Toy Palm Trees

Or close enough. These are plastic trees that decorated my oldest son's birthday cake, along with dinosaurs, about 10 years ago. Luckily they were saved from being thrown away and I added some paint and flocking. Surprisingly the acrylic paint covered the plastic very well; even without primer. Clear matte acrylic was sprayed as a sealer 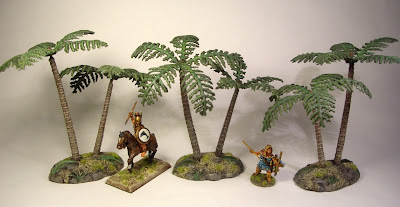 They look about right for 28mm. They will be used along the River Phrygius for the Magnesia game. The Romans used the river to protect their left flank.

This is what the trees looked like prior to the painting and flocking; actually I've already dry-brushed some of the trunks and bases. Left over lead was glued under the bases using Epoxy. 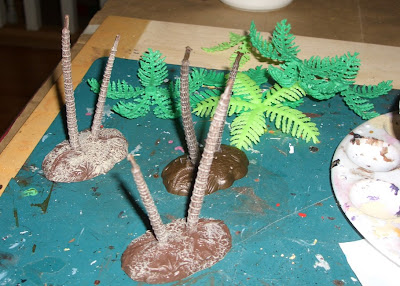 While awaiting the arrival of some orders to complete the Seleucid army - I figured I may as well build the movement tray for the Hetairoi wedge. The photo below shows a test fit with the figures I have now. The Relic Antiochus figure will actually be in the lead position, and the leader in silvered armor, a Magister Militum figure, will be moved to the second row alongside the standard bearer. 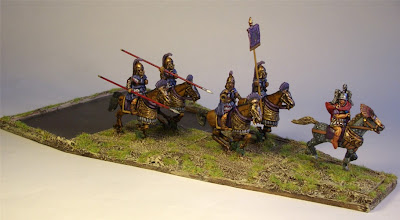 Some left over plywood from Joann's was measured and cut. Styrene plastic was glued on for the edging. As you can see in the picture, the edging wasn't too precise as I added acrylic caulking to blend it into the ground work. 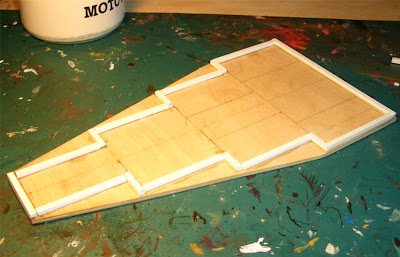 The photo below shows the caulking applied, as well as magnetic sheeting. 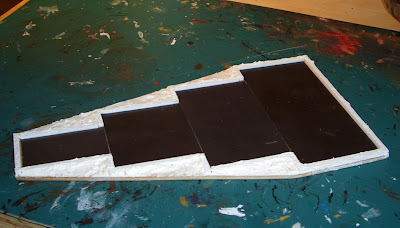 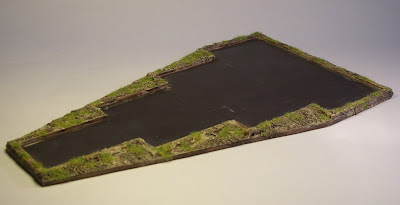 In comparison to this wedge tray, I made one out of styrene plastic several years ago for some A&A Companions. This tray is rectangular and without the edging blended in. It was someone's suggestion that blending in the edging would make it look nicer - so I did it this time around. 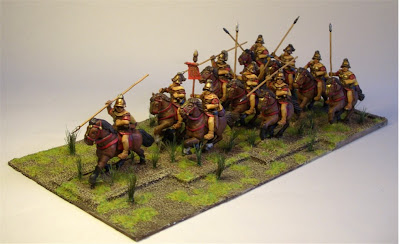 Can't wait until the orders arrive to complete this army, so we can do some playtesting.

On a side note, we've had some fairly cold weather recently, it snowed a couple of days this past week. Slippery road conditions aside, still pretty nice. The dogs enjoyed it. 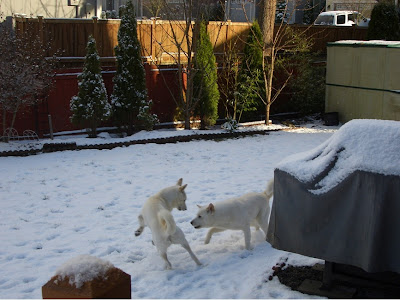 The clean and defined sculpting really allows for quick painting of these figures, including the horses. Choosing a basic and uniform color scheme also helped. The only thing I found somewhat negative is how the riders sit on the mounts. Or should I say how they don't sit well on their mounts. I used some Green Stuff to help them sit better. The riders legs also look a bit too far outside of the horses bodies too. However, this will be a minor thing as they will be in a wedge formation. I'm hoping I get the remainder of this unit soon. 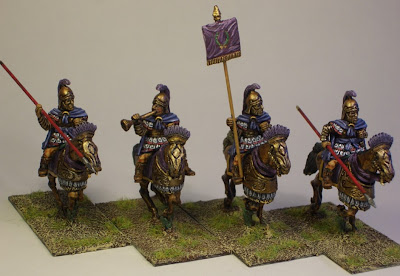 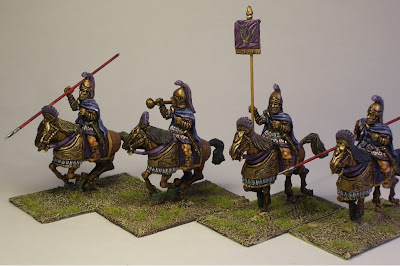 These are closer to 25mm than 28mm - and I've also ordered a Relic Antiochus figure who is definitely larger - listed as 29mm - so hopefully he won't too odd leading this unit. He looks too good to pass up for a Seleucid army.
Posted by DeanM at 9:01 AM 11 comments:

Haven't received my second order of 1st Corps stuff yet, so I ended up rebasing some Crusader Thureophoroi. They were originally on metal squares, but since I plan to use them exclusively as skirmishers, I rebased them on fender washers. I also needed a Hipparch to lead the Tarentine cavalry, as well as an Army Battle Standard. I had a couple of older figures that I never used so gave them a little bit of TLC and voila. 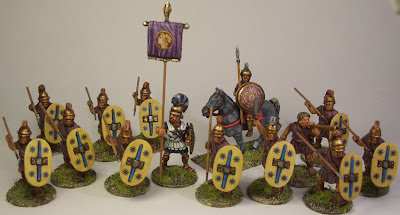 I'm not sure of the maker of both the mounted guy and the standard bearer. I bought these figures about 15 years ago from a shop (long since closed) while I was in Hawaii. The shop had all of their lead figures in large cabinets - as singles, and they'd roll around when you opened the drawers. You could mix and match the figures with whatever shields and weapons were in the drawers. The mounted guy was a Roman officer holding a sword - which I cut off and drilled his hand to take a javelin. I also added a spare Foundry shield with LBMS transfer. The standard itself is from the 1st Corps Hetairoi set - which I felt was too large for a cavalry unit. I replaced their standard with the one from the Crusader Thureophoroi set. As the Thureophoroi will be skirmishers, they won't need a standard.

Since I didn't have any major painting projects to do - we did some minor landscaping around our house. My wife, two sons and I managed to get four yards of pea gravel around our house. It was imperative we complete the project as the gravel was delivered on our front driveway (with our vehicles in the garage). 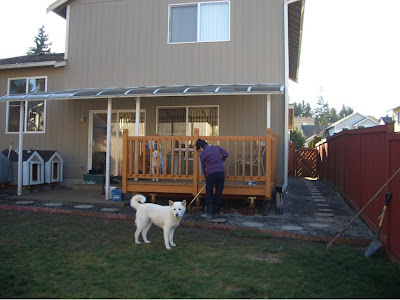 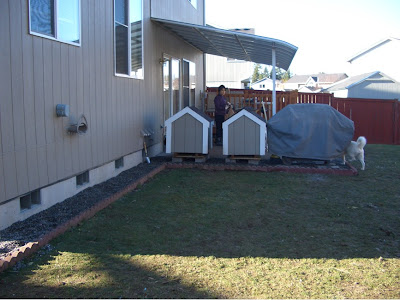 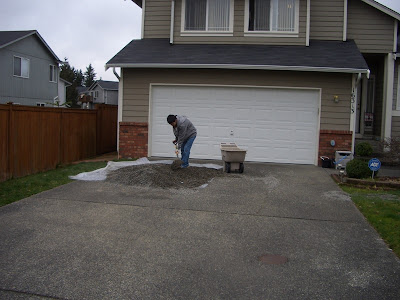 The next big project is getting our grass back to a decent condition - with the dogs trampling it underfoot it'll be a tough one.

As far a painting - in addition to the 1st Corps Scythed Chariot and Agema cavalry, I'm also waiting on some Old Glory Gauls - both infantry and cavalry. Since I committed to running a Battle of Magnesia game  at Enfilade! in May, I figured you have to have Galatians running amok. I also broke down and ordered an Antiochus figure from Relic. I was hesitant to get him as he is listed as 29mm and the unit he'll be attached to will be closer to 25mm. Guess that'll make him easily identifiable as the Army General.
Posted by DeanM at 4:09 PM 11 comments:

These guys paint up really fast - I started with a black undercoat and then dry brushed the armored areas. Minimal colors as I opted to go with a basic purple color scheme. I'm waiting on an order of 1st Corps Agema Cataphracts to join these guys. The Agema will have half-barded horses of a different style then the ones that come with the Hetairoi. The plan is to mix the horses between the two.

They'll be armed with North Star spears.
Posted by DeanM at 12:51 PM 7 comments:

Steve at LBMS was kind enough to send me two sets of Alexander the Great head transfers - each facing opposite directions - just to be sure I got the one I wanted. This unit will be used in skirmish mode with both thrusting spear and javelins. Even with them being rated as Guards, the unit probably needs to be doubled in size.

Brass rods are used for the spears - their heads being flattened on an anvil and then shaped with a file. The transfers are for Old Glory 15mm shields - at least in the catalog. 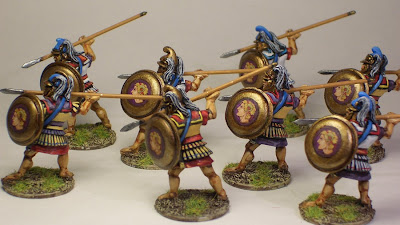 My 11th grader needed to pick up a book for class so we stopped into the local Half Price Bookstore. I found this on the shelf in the history section - "The Mercenaries of the Hellenistic World" by G.T. Griffith. Having never seen it before it was a must have; and it is in pristine condition. 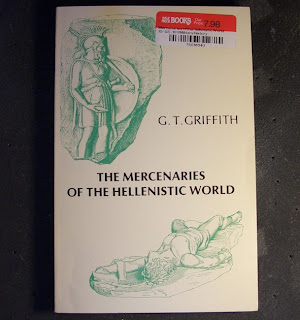 Started a little work on a few 1st Corps Hetairoi. This is the command pack that I ordered through Scale Creep a few weeks ago. I wanted to see how they looked in-the-flesh (lead) before I ordered more. They're nicely sculpted, if not a bit stiffly posed. The sword from the leader was removed to accept a kontos. The guy on the far left had hand repositioned a little to better hold his kontos. A steel rod has replaced the lead staff of the banner.

The half-barded horses are nice, but all have the same type of chest armor. They look very similar to the Magister Militum/Navigator barded horse I have - maybe the same sculptor? Anyway, I plan to get a few Gripping Beast Seleucid horse, as they have a variety of barded armor. Hopefully the two makes are sized close enough so I can swap some riders and mounts between them.

For what it's worth - here is a comparison shot of some of the Greek/Macedonian shields that I have. Note the two on the far right are for phalangites.

Here's a side-view shot to show depth of the shields.

Painted up these Foundry Hypaspists to accompany the Silver Shields. Awaiting the arrival of some LBMS shield transfers. I ordered some transfers earlier, but the Alexander the Great head faced in the wrong direction - to the wearer's left. I want the head to face to their right; I did use one of the ones facing to the left on the standard for the Silver Shields. 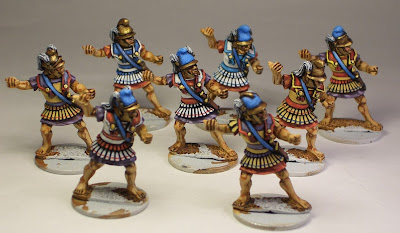 The Foundry shields are a bit too convex for my tastes, and I had some left over Aventine shields that look perfect for them. Only problem is I only have six Aventine ones, so I modified two Foundry shields by filing down the face of the shield to make it less convex, and also added some Green Stuff to widen them a bit. The photo below shows how they compare. 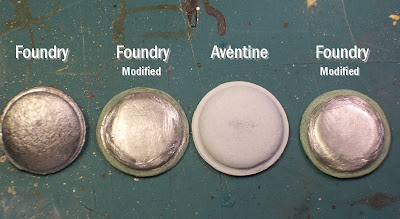 I'd like to eventually double the size of this Hypaspists unit; maybe with some other makers.