Just got back from a very cool Dragon Rampant game day (30 pt warbands) in beautiful Gig Harbor - lovely drive over the Narrows Bridge spanning Puget Sound. It was held in the Gig Harbor Public Library - no charge and very low-key. Pat L. (aka SocalWarhammer) was the host again, as he had done for the Lion Rampant game day last September. The usual suspects attended; great folks with some beautifully painted armies. I played against David S. (here's his I Live with Cats blog) and his Centaur-Minotaur warband in the morning. We later played in a doubles game in the afternoon. This time I sided with Scott A. and his Dark Elves army against David and Ron B. with his Conquistador-Ogre warband. Granted, some of these are carry overs from previous WHFB armies; like my Men of the West warband using Empire figures. I lost both games, but with some satisfaction as in the first game, David's warband leader was killed off before mine. The second game had me failing multiple shooting and attack activations with my Elite Foot, which could've decimated Ron's units. Without further blabbing, here are some images of today's games. I apologize upfront for not knowing some of the names or type of warbands of my fellow gamers.
We have another Lion/Dragon Rampant game day in March. Additionally, I have committed to running several Lion Rampant Wars of the Roses games at Enfilade in May. Best to you all until my next post - whatever and whenever that may be.
Posted by DeanM at 7:09 PM 29 comments:

Happy New Year From the Men of the (Pacific North) West Warband!

Ushering in 2018, here is the Men of the (Pacific North) West Warband for Dragon Rampant - with all available options. Actually, except for the Great Swords, all of these figures are remnants of an earlier WHFB Empire army. Select units will make up a 30 point Warband for a Dragon Rampant game day in a couple of weeks. 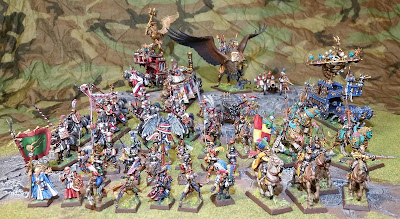 The author of Dragon Rampant has made the use of available figures from other systems, like WHFB, quite flexible. For instance, the Steam Tank and other artillery pieces, can be used as reduced, single model Heavy Missile units. 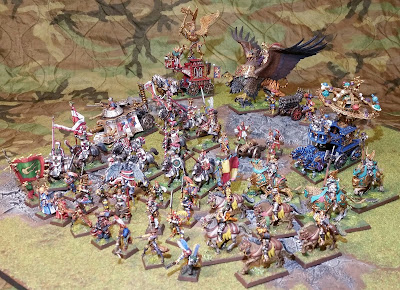 In any case, it's nice to be able to use these former WHFB Empire models in a much more simplified (particularly points system) set of rules like Dragon Rampant. As far as new projects - nothing pressing, but would like to find a couple of OOP GW figures - particularly Count Marius Leitdorf and a Master Engineer on Mechanical Horse. I might also try to make forays into smaller scales - possibly 6mm Samurai or revisiting my 1/1200th scale Ancient naval stuff. But again, nothing definite and my hobby focus has been flighty at best!  Wishing you all a great 2018!
Posted by DeanM at 12:42 AM 32 comments: