I basically just added highlights and details to this pre-painted figure. Went over the red with a stain and added the usual GW-style highlighted edges on the armor. Also gave the gold areas a wash and then highlights. . 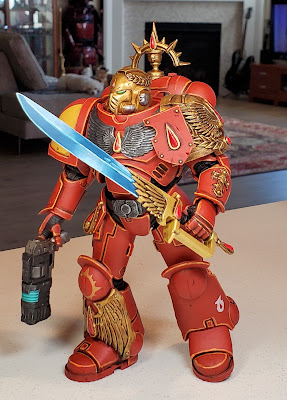 The power sword is the only thing that required any actual painting - my second attempt at a power sword. Not completely happy with it (nor the earlier one on the Imperial Fist guy); still trying to figure out the process. I don't think painting these by brush can looks as good as airbrushed ones. 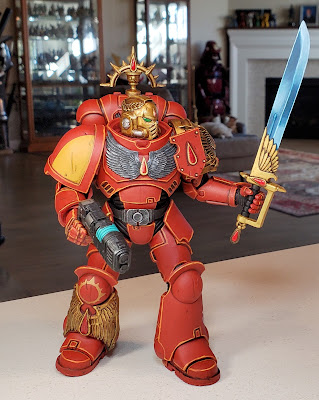 I do like the overall look of the figure with all the extra "bling" for the Lieutenant. The lore has these guys ever-ready to take over if the CO goes berserk with rage. I am getting a kick out of learning 40K lore. 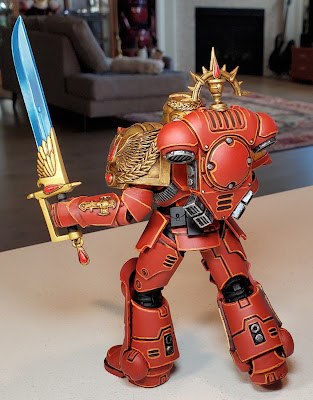 On the gaming scene, I did get in a refresher Bolt Action Franco-Prussian War game yesterday thanks to a couple of buddies. One of whom returned from Afghanistan as a contractor back in May on leave, and was told not to come back. Finally, thoughts and prayers to the real Marines, Army Paratrooper and Navy Corpsman who we recently lost over there. Until next time, best wishes to you all and thanks for stopping by.
Posted by DeanM at 5:33 PM 20 comments:

Yet another 7" McFarlane Space Marine - this one painted up as a White Scars. I managed to pick up a few of these from the local Target store. In fact, the Power Chainsaw and Bolt Gun are from an Adeptus Sororitas (Sisters of Battle) box, also from McFarlane. 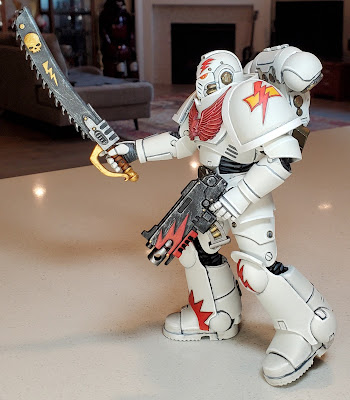 I should add that I never heard of the Sisters of Battle until seeing them by McFarlane. Besides enjoying painting up these large scale Space Marines, I've been learning about the different chapters and their lore. The White Scars lore is loosely based upon the historical Mongols - very funny stuff! 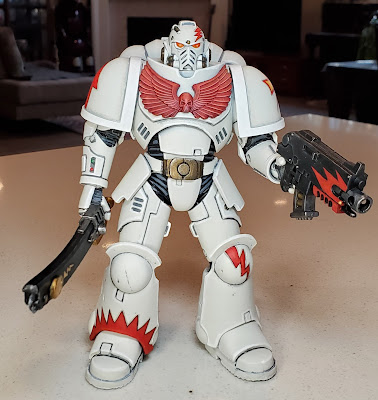 The armor was sprayed with Krylon Satin Ivory as I didn't want it too white as a base coat. The edges of the pauldrons and highlights are painted with Vallejo Game Color Artic White - noticeable brighter than the ivory color. 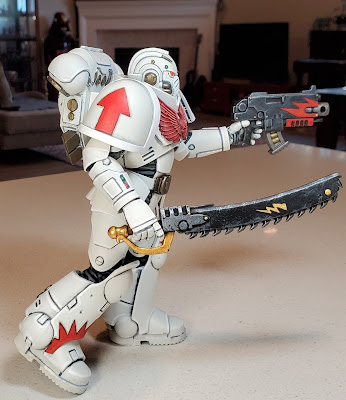 A hairdryer was used to curve the Chainsaw to reflect their "Mongolian" heritage. The addition of Yak hair would really enhance the look too. 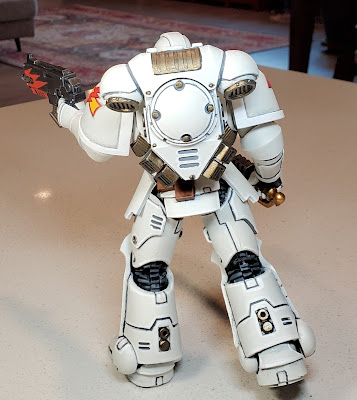 The "heraldry" was painted freehand; as most of these are geometric shapes, they weren't too difficult. I sketched the basic patterns with a pencil directly onto the figure. 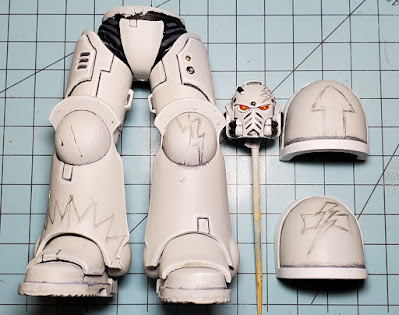 On the gaming front - a refresher Bolt Action Franco Prussian game is scheduled for this Friday. Next weekend will see this game hosted at Enfilade on Saturday night. As for convention attendance, it's already projected to be much lower than previous years. The Canadian border is closed to recreational travel, so our British Columbian brethren will not be able to make it. A lot of others have cancelled due to the recent rise in cases from the "variant." Our state has gone to mandatory indoor mask wearing as of yesterday. It'll be interesting GMing while wearing a mask, but with a lighter attendance, should be manageable. Thanks for stopping by and wishing you all the best.
Posted by DeanM at 6:58 PM 18 comments:

Yet another one of those "action figures" from McFarlane. This one painted up as an Imperial Fists Champion with power sword. I may add some "bling" to him later - like some purity seals and possibly a loin cloth. 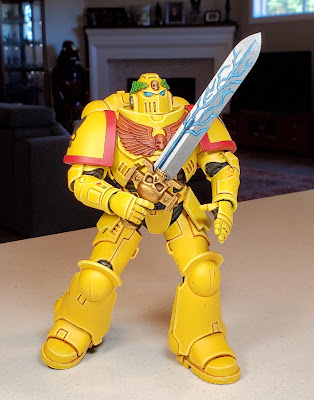 Both the sword and Champion head/helmet are from an ebay seller who specializes in aftermarket parts for these figures. I think 3D printed, and of high quality. 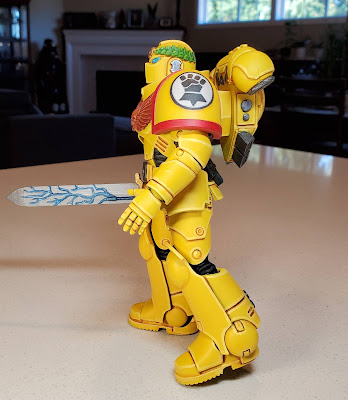 This was only my second attempt at painting those "power" streaks on the sword. The first few attempts were done on 28mm figures many years ago. After watching a YouTube tutorial, I picked up a bottle of Vallejo Glaze Medium to facilitate the painting. It was one of the few bottles still in stock at the FLGS. They've not had a resupply of paint and other products in over a year. I also perused their Warhammer stuff and saw 28mm Space Marines going for over $40 - double what I paid for this one at Target. As I don't intend on gaming 40K, and just like painting the figures, this is a great trade off for me. 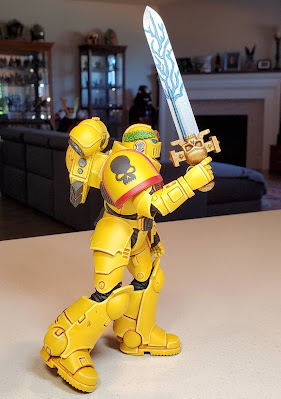 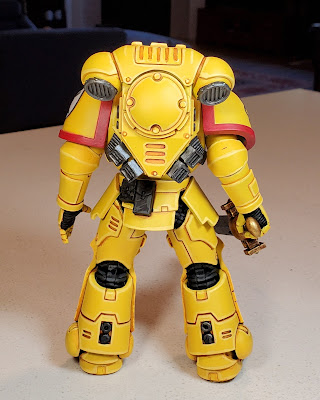 Here's how I started on the pauldrons - sketching the basic outlines with a pencil. 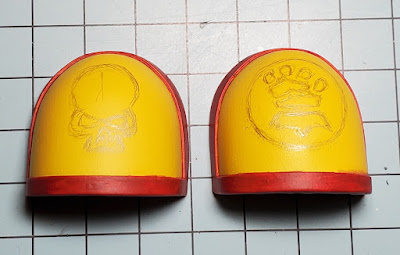 Paint was then added in light layers; below shows the initial work; I widened the eye sockets of the skull a bit more after this picture. 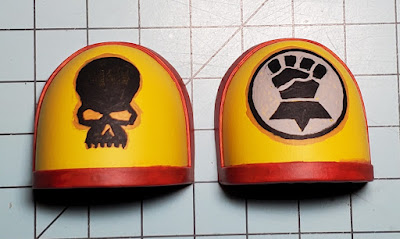 So far, still enjoying working on these larger scaled figures, but do have a refresher Bolt Action Franco Prussian War game scheduled for next Friday. Also, the week after that is our annual convention, Enfilade; which was cancelled last year. Incidentally, our Governor just declared a statewide indoor wearing of masks starting next Monday - regardless of being vaccinated or not. We predict attendance at the convention to be about half the usual number. Until next time, wishing you all good health and happy hobby pursuits!
Posted by DeanM at 11:20 AM 10 comments:

Finished up the pauldrons and painted and detailed the weapons. 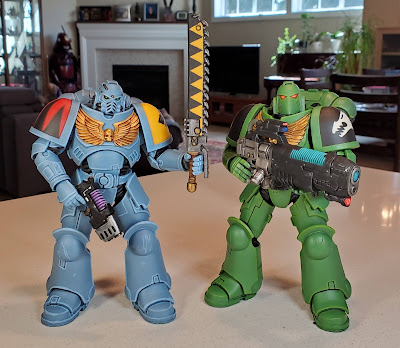 The plasma incinerator with the Salamander is a stand-in until he gets an "approved" weapon like a flamer or meltagun. This weapon error was brought to my attention by one of my buddies who knows the lore. There's additional weapon types on ebay so no problem. 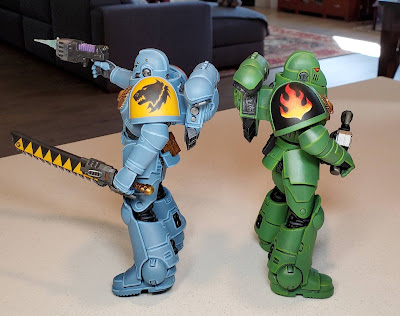 As you may surmise, I don't have any 40K background other than painting up a few Space Marines and playing one (1) game many years ago. That all said, I like painting larger scale figures every now and then, and Space Marines do have a lot of possibilities. 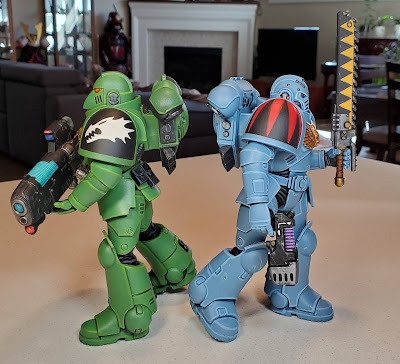 EDIT: Group photo with pre-painted Blood Angel and Ultramarine figures which were given a little bit of detailing - not much. 28mm figures for scale comparison. I switched the left hand of the Ultramarine onto the the Space Wolf to hold the chainsword which came with the Ultramarine.

Anyway, just a short diversion from wargaming proper. I have a Bolt Action Franco Prussian War refresher game scheduled later this month - right before hosting it at Enfilade. Thanks for stopping by and wishing you all the best in health and hobby pursuits.
Posted by DeanM at 5:30 PM 21 comments:

Here's the other Space Marine figure - this time as a Space Wolves guy. Again, need to finish the pauldrons up with chapter icons. 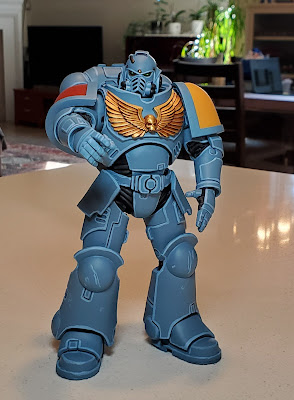 This one has the stock head/helmet that comes with the kit. The basecoat is from a can of Army Painter Wolf Grey. 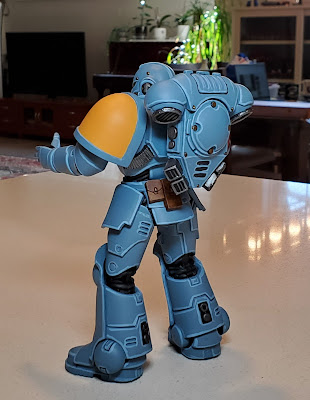 The figure is articulated and comes apart to ease painting. However, during reassembly the torso is a tight fit to get back onto the leg/waist ball joint. From watching a YouTube video, heating up the area with a hairdryer helps a lot.
EDIT: Finished the pauldrons. Painted them freehand, and happy the way they turned out.

Just a little diversion before refocusing on hosting a Bolt Action Franco-Prussian War game next month at our "annual" convention, Enfilade. Annual in that it normally is supposed to be during the Memorial Day weekend in May. However, we skipped last year due to the lockdown, and this year's was pushed out to Labor Day weekend in September - again due to health concerns. Our gaming brethren up in British Columbia will likely not be able to attend as the border is still closed to recreational travel. It's supposed to reopen in a few weeks, but who knows now with the new concerns. The Canucks usually show up in force and host a multitude of amazing games - not to mention their wild gatherings late into the night. They will be sorely missed. Until next time, thanks for stopping by and wishing you all good health and happy hobby pursuits.
Posted by DeanM at 6:01 PM 4 comments:

Still need to paint the chapter icons on the pauldrons, but the main figure is pretty much done. 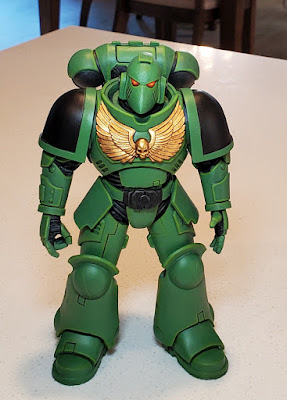 I stripped off the initial green because it wasn't drying; figured out the spray paint was a lacquer and didn't react well to the plastic. Ended up re-painting it with a can of Army Painter Goblin Green from a local hobby store. This was the first can of Army Painter spray paint I've ever bought, but I have to say it's a good paint. A lot more expensive than the stuff I usually would use from hardware stores, but I couldn't find a green that was close for Salamanders. In fact, some may say it's a bit light, but I like how it turned out. 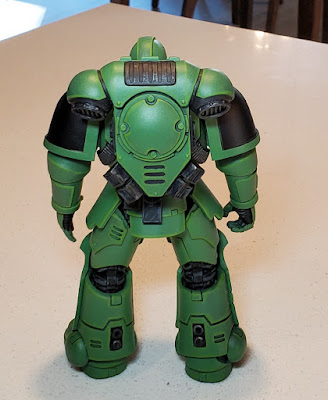 Next up is the Space Wolves figure - which I ended up picking up a can of Army Painter Wolf Grey since it's another unique color that I couldn't find a match for at hardware stores. Anyway, the Wolf Grey might also be a good base color for the soon-to-be released Wargames Atlantic Poilus which I plan to get a box of. Anyway, thanks for the indulgence and until the next post, best wishes to you all.
Posted by DeanM at 6:47 PM 8 comments: