Childhood Living Is Easy To Do...

If you had an indulgent mother who nurtured your interest in military subjects - particularly uniforms and armor. Seeing blogger buddy Jonathan's recent Palouse Wargaming Journal post of Genoese heavy cavalry made me reminisce of similar model soldiers in childhood books which I still have. The "Color Treasury of Model Soldiers" has some splendid images from days gone by. All of these books are from the 70's when I was young grommet growing up in Hawaii. Thankfully, I've kept them ever since. 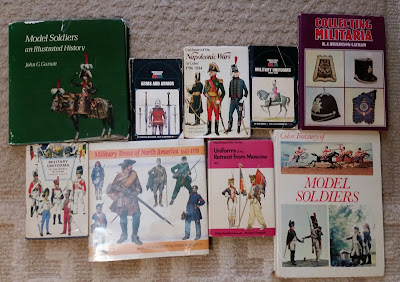 My mom, now 86 years young and still living in the same house I grew up in back in Hawaii, bought all of these for me - save the "Military Dress of North America," which my cousins got for me for Christmas 1975. Incidentally, my aunt used to work for the Hawaii Public Library and would get me all kinds of books on said subject. Yes, I was totally indulged at an early age. Thanks for letting me share a bit of my history and best wishes to you all!

Before even getting a first game of The Pikeman's Lament in, local rules expert (he wouldn't say it himself, but I consider him so) Pat L. (aka Socal Warhammer) presented the local Rampant sycophants here in the Pacific NW with a version of Lion Rampant based on the Punic Wars era. It's very well thought out as he had been working on it in private for sometime. As you may know Pat has written a version for Chariot warfare - it was in an issue of Wargames, Soldiers and Strategy a year or so ago. Having sold off most of my Macedonian/Successor army (including four pike phalanx units), it was nice that I held onto a few models. These are just enough for a core "retinue" (not sure what the proper term will be) using Pat's rules. Too bad the Scythed Chariot I still have can't be used (yet). 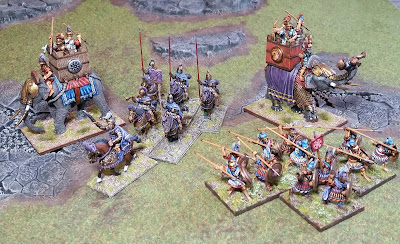 The elies are Aventine (painted many years ago - as the rest of the models); the Companion/Cataphracts are 1st Corps - led by a Relic Seleucus; the Hypaspists a mixture of Foundry and 1st Corps.

The elephant profiles are based on Dragon Rampant's Greater Warbeasts. Haven't really pointed them up with Pat's rules yet, but just wanted to post a teaser shot. I'm sure I'll only be able to afford the use of one of the elies for a 24 point force. Here's a link to the Pacific NW Rampant FB if you would like to join and check out Pat's rules. Best wishes to you all on this Pacific NW rainy Friday the 13th (aka Templars Round Up Day).
Posted by DeanM at 8:44 AM 25 comments:

The local "Rampant" loyalists have decided to get into The Pikeman's Lament. Using the "Exotic Army List" I will be able to get my old (as in Old Glory) ashigaru and samurai figures on the table again. Here they are as: 1 Aggressive Forlorn Hope OR Aggressive Elite Gallopers @ 6 points (Samurai on foot or mounted); 2 Shot @ 4 points each (Ashigaru with Teppu/Harquebus); 2 Pike @ 4 points each (Ashigaru with Yari/Long Spears) 1 Commanded Shot @ 2 points (Ashigaru with Yumi/Bow).

I've yet to read through the rules - they just arrived today thanks to a trial Amazon Prime membership; they can't be too far removed from the previous Rampant sets (Lion and Dragon). I'm very fortunate to belong to a community here who are into these rules. 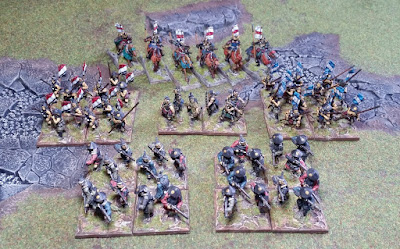 As mentioned above, these figures were painted a long time ago and used with various rule sets before - i.e. WAB and Hail Caesar. I'm looking forward to getting them into action action. Thanks for visiting and wishing you the best!
Posted by DeanM at 1:12 PM 29 comments: