Incident at Colgone - Pershing vs. Panther

Taking a rather long break from figures, I decided to pick up a Tamiya 1:48 scale M26 Pershing kit. The build was very simple - the only fiddly work was the multi-section tank treads. Hadn't built a model kit in some years; in fact, the last one was a Tamiya 1:48 scale M10 Tank Destroyer. These kits have metal bottom hulls, so make for a nice weighty gaming piece. Anyway, had to take out a Corgi 1:50 scale Panther for a photo op. This is an interpretation (using existing terrain pieces) for that famous tank battle near the Cologne Cathedral in the last days of the war in Europe. 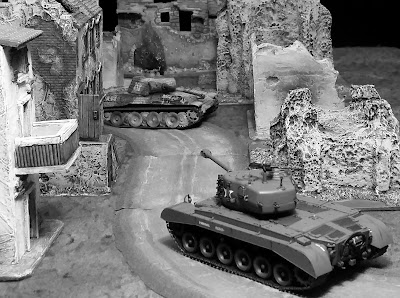 The Panther had just taken out an M4 Sherman of the 3rd Armored Division, and luckily an M26 Pershing was only few streets away. The Pershing hunted down the Panther and made a direct hit on the move. The Panther never got off a shot - possibly due to the crew not immediately recognizing the Pershing and thinking it was a German tank? The Pershing made a few more shots and the existing video shows some of the German crew escaping from the burning Panther. 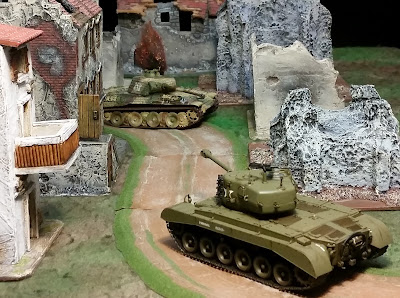 EDIT: Previously, I had posted I wasn't sure how the Pershing fared against Tigers. I've since found out that a Pershing from the 3rd Armored Division was indeed knocked out by a Tiger I on 26 Feb 45. In fact, the Pershing that was hit was named "Fireball" - the decal on this kit! It sustained three hits, one to the gun which exploded a chambered 90mm round. The gun tube was replaced and the tank returned to service. The Loader and Gunner were killed.

Speaking of Tigers and Panthers, here's an example of each with the Pershing for size comparison. Again, the Panther is a Corgi 1:50 scale diecast (repainted with zimmerit); the King Tiger is a 1:48 diecast by Hobby Master (OOP, I think). 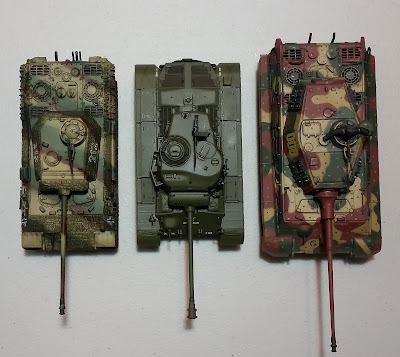 A view from above of the same three tanks. Note how wide the track base is on the Pershing. Pretty modern looking IMO. In fact, the basic design of the Pershing changed very little with subsequent US tanks up until the M1 Abrams.

And a comparison with contemporary US tanks of the time. A resin 1:48 scale M3 Stuart made by Kengi and Corgi 1:50 scale diecast M4 Sherman on either side of the Pershing. For the record, I'm on the lookout for a 1:48 or 1:50 scale M24 Chaffee. Thinking of a late-WW2 or Korean War Bolt Action unit. 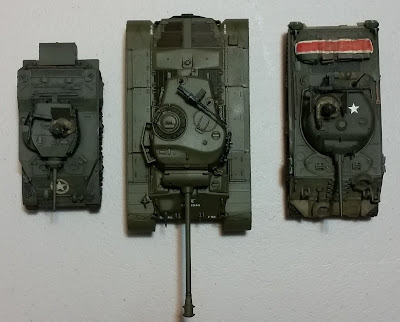 A view from above of the same three tanks. The Pershing was sprayed with a Testors Olive Drab enamel and given a pin wash at the seams, etc. The color is sort of lighter than what I had expected, but there's a ton of discussion on the "proper" color of WW2 US Olive Drab - so I'll leave it as is.

And finally, the antagonists side by side. So much for now - just wanted to post something on the old blog to let you all know I still exist.Until next time, warmest regards to you all!
Posted by DeanM at 10:09 AM 24 comments: