Okay, I still need to pick up the rulebook, but these are ready for the table-top. First up the Rangers:

Highlighted the green and red areas - also added some rouge to their cheeks to soften the look of the staining process. Here they are next to a couple of previously painted Foundry Grenadiers for comparison. They are pretty close in size and sculpting style. The main difference would be the poses - the Front Rank guys are more dynamically posed, but reflect the nature of their fighting style. 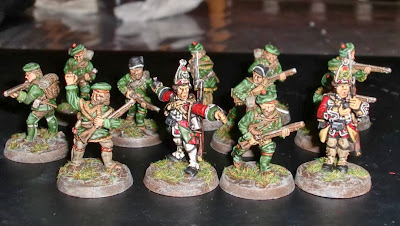 Here are the Canadian Militia - a bit of highlight was added to their headgear and coats, but they still look rather scruffy; but this may be in keeping with their backwoods living. 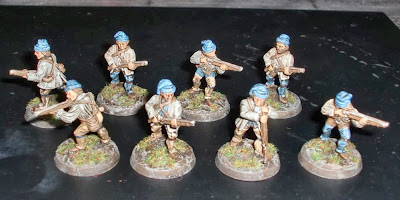 Next to Foundry French - again, same take as the British and Rangers.

I may add some Native allies to the French forces, but probably should pick up the rules first. Hope you like these and thanks for visiting the blog.
Posted by DeanM at 5:09 PM 23 comments:

Wanted to post this WIP for a couple of reasons. One - to show that I'm still in the game and second - to show that I think my 40K/WHFB fling has somewhat cooled. I've been out of the net, so to speak, as I recently had another close family member pass away several weeks ago. I had to go to Hawaii for the funeral and provide some comfort to my family there. To pass the time on the flight over I took my copy of Hail Caesar to read. I was almost going to get a copy of White Dwarf to read, but didn't have the fire for it. Anyway, no sooner had I returned last week I looked for the Front Rank French & Indian War figures that Doug Hamm (aka Larry Leadhead) had practically given to me earlier in the year while I was at a convention up in Burnaby, B.C. The intended rules for these will be Muskets and Tomahawks, but the Hail Caesar read was inspiring for a return to Historicals, nonetheless.. 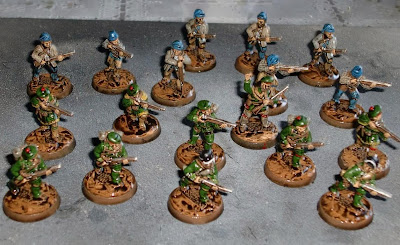 Anyway, sorry for the long lead in to this post, but here are the figures still dripping with Minwax Tudor Satin stain. 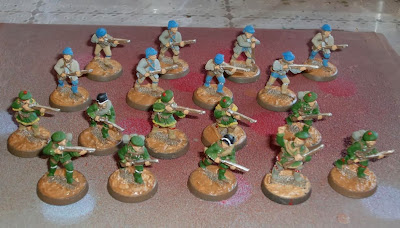 Prior to the stain a quick block paint job was applied using mostly greys and blue for the French, and green and some red for the Rangers. By quick I mean they were done this morning in a couple of hours using mostly a fairly large brush. I only used a smaller tipped brush for the legging straps and the red band around some of the Rangers' berets. Speaking of leggings, the French aren't sculpted with them, so I just painted them up as such. 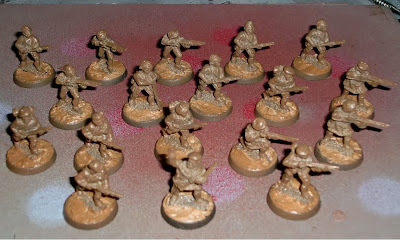 To speed up the process even more they were primed brown - Krylon Brown Boots from Walmart. The undercoat is retained for the musket/rifle stocks, shoes, belts and straps. Once the stain is completely dry, they'll be sprayed with Testors Dullcote and the bases flocked.
Posted by DeanM at 12:14 PM 18 comments:

Here's the chapter so far - a Drop Pod would be a nice addition in the future. 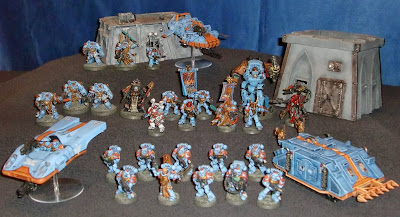 Added a few decals and bling items to, dare I say it, pimp my ride. 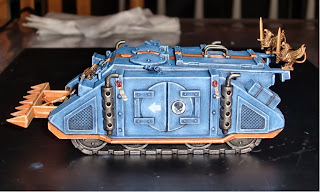 GW fans will note the sword bearing griffons on the rear mounts are from the Fantasy Empire Watch Tower kit. They are pegged with brass rod and removable. 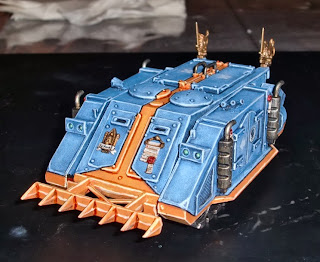 The two placards on the front glacis are from the Space Marines Command Squad kit. They are attached with blue tack and also removable. 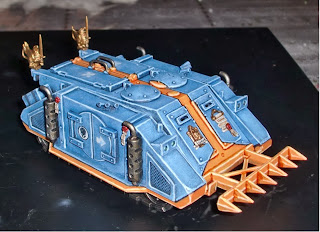 The arrow decals are also from the Command Squad kit - for shoulder guards, I think. The skull and caution stripe decals are from the Land Speeder kit, IIRC. 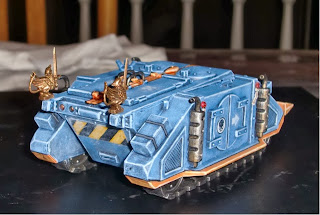 So, it is pretty much complete except for a storm bolter - which I'll likely get off of ebay someday.
Posted by DeanM at 5:27 PM 19 comments:

Here it is with the basic Marauders' chapter colors. Still need to paint the tracks, wheels and exhausts. 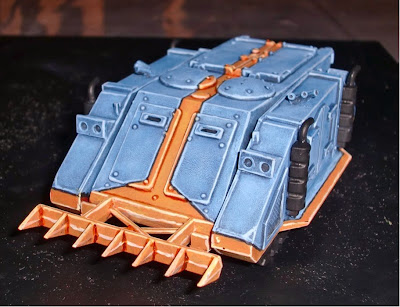 After removing the original paint, it was sprayed with a black undercoat. The blue was dry-brushed on in gradually lighter finishes. 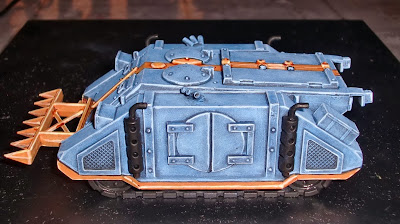 I like the GW 'Eavy Metal way of highlighting edges - hadn't done this type of painting before, but it looks very appropriate for Space Marines stuff, IMO. 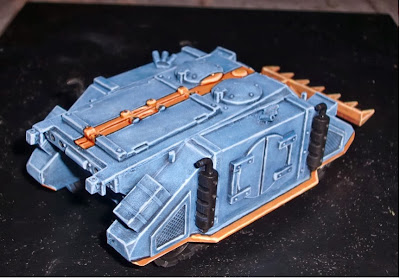 I may add a heavy bolter to one of the hatches instead of the bolters on each of the hatches which originally came with the kit. Those older bolters look a bit small (whimpy) compared to current armament. 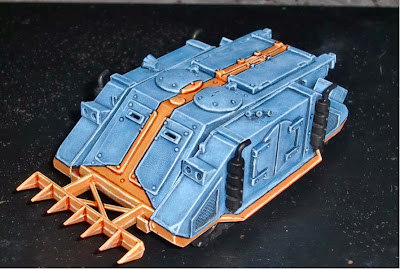 Here's what it looked like after a couple of days soaking in DOT 3 brake fluid. Some of the fiddly stuff broke off due to vigorous use of a tooth brush to remove paint from some of the tighter areas. I replaced the top hatch handles with brass rod. The exhaust pipes were also strengthened with brass rod. 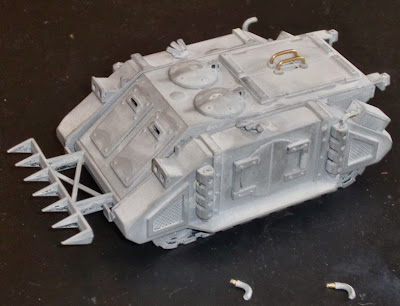 Master of Signal with Auspex

Here is the figure made up of spare parts - the Auspex, legs, arms and torso from the Command Squad set, the head and bolter from a Ravenwing set. I don't have the current rulebook, but the the Auspex wasn't in the previous rulebook - which I have.
EDIT: found this on the DAKKA DAKKA site: "According to the 6th Edition Space Marine codex, "A model with an auspex can use it in place of making a shooting attack. If he does so, target an enemy unit within 12" (this does not count as choosing a target for his unit to shoot at). A unit that is targeted by one or more auspexes has its cover saves reduced by 1 until the end of the phase." 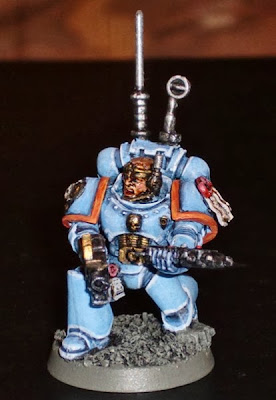 The antennae are scratch-built - the taller one is a brass rod with a base made from an Empire war hammer staff; the other one is a spare (unused) part from a Tamiya M10 kit - no idea what it was supposed to be. 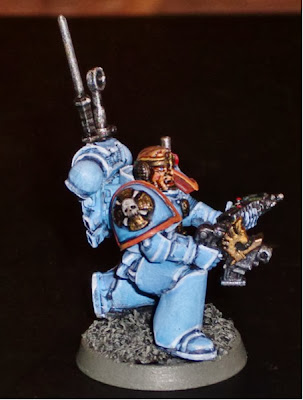 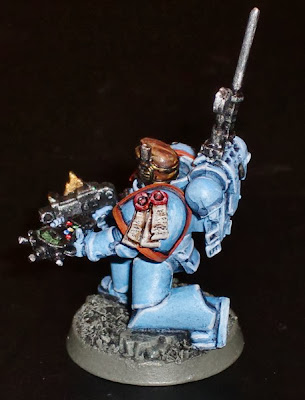 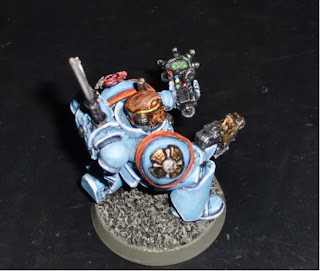 I also have a Mk1 Rhino I picked up off of ebay that is soaking in DOT 3 brake fluid to take the paint off. I used Simple Green but it still wasn't peeling the paint off fast enough. Here's what the tank looked like delivered - pretty good shape and had a cross decal for the Black Templars on the rear hatch. 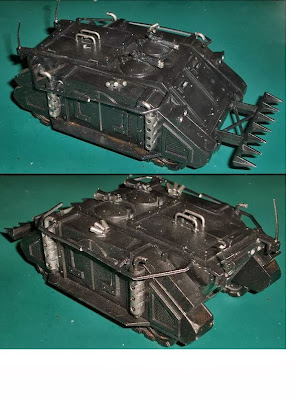