Perry Red Lancers - Final Figures for 2018...And Some Year-End Reflections 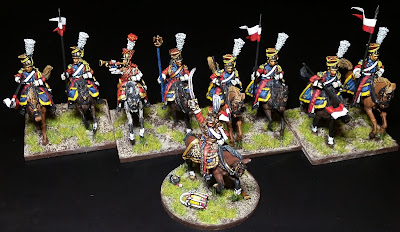 Although not present in the Peninsula, they participated in the Russian Campaign where they suffered heavy casualties. Thereafter they fought in the 1813 and 1814 campaigns, and finally at Waterloo where they were brigaded with remnants of the Polish Lancers. 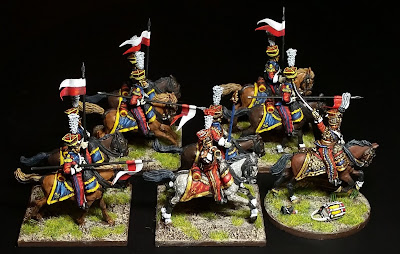 The striking scarlet colored uniform is a must-have for the table top. 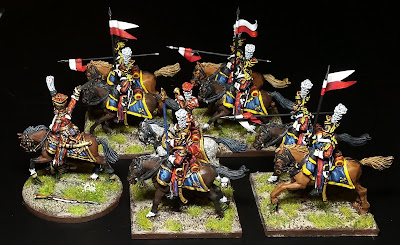 Perry also makes them in campaign dress, but full dress is so much more snazzy. 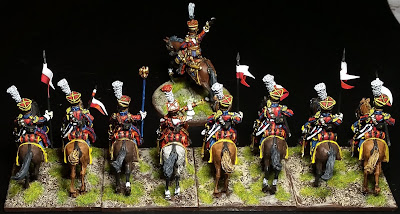 For purposes of Black Powder, they are classed between medium and light cavalry with 7 Combat dice, and also inflict -2 Morale saves to infantry and -1 to other cavalry. 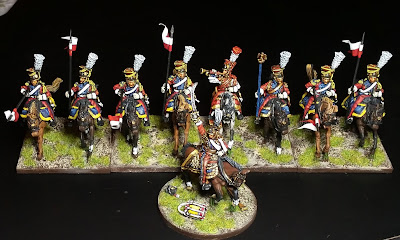 I know we still have a few days left in 2018, but I wanted to thank all of you for stopping by and leaving such nice comments. Hobby-wise the year started out fairly slow as I had geared up for Enfilade! in May with Wars of the Roses games using Lion Rampant - most of the figures being painted up in the previous year. Soon after the convention, however, I had a relapse into Napoleonics. To be perfectly honest, I hadn't touched Napoleonics since 2012, and the release of the 2nd edition of Black Powder several months ago coincided nicely with this return. Anyway, it's been a pleasure reading your comments and also visiting your blogs as well. Looking forward to what 2019 will bring!
Posted by DeanM at 10:10 PM 63 comments:

From "The Last Frenchman in Russia" and friends. Not to worry as he made it out of Russia and went on to be a math teacher in North Carolina. 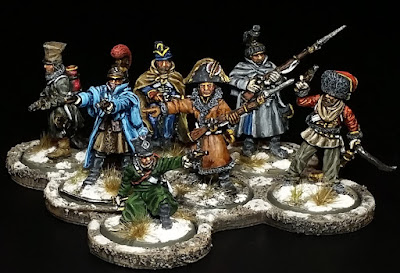 These are figures which I painted a few years ago and already posted somewhere on this blog, but recently put them on a multi-fig base from Litko.

On the workbench, which will likely be the last figures for 2018, are Perry Red Lancers. 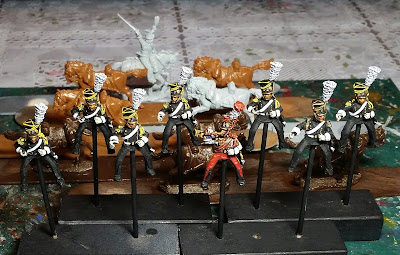 Till next time, wishing you all the very best for Christmas! 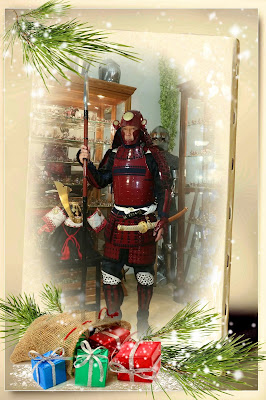 Here's a unit of Scots Greys which will be used in a cav-heavy Black Powder game based on a scenario in the 2nd Edition - "The Eve of Waterloo." As with the rest of my cav, they're in 8-man units. The officer will be used for either a brigade commander or ADC.

They are the first metals, besides the few Black Hussar specialty figs, I've added in a while. The weight difference from plastic is quite apparent. 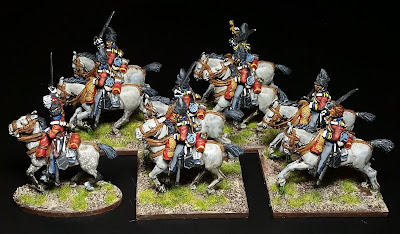 They'll be another heavy unit for the British, who should be a good match against French Cuirassiers and Dragoons. 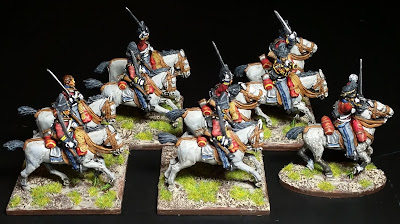 They didn't participate in the Peninsula, but famously advanced at Waterloo - not quite a charge - and assisted the 92nd Highlanders in repulsing the French line. 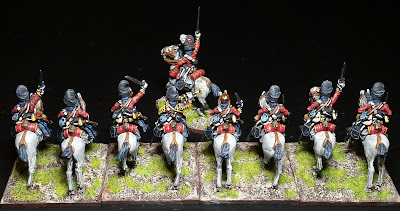 A can of Krylon Matte Glacier Gray sped up painting the horse flesh which was followed by Minwax staining. 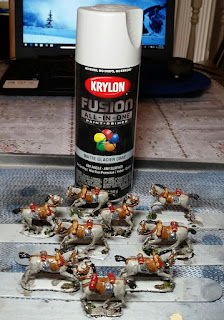 Next up are the Red Lancers - also Perry metals. Until then, wishing you all the best during the holidays!
Posted by DeanM at 5:03 PM 43 comments:

Another small unit of skirmishers for Black Powder. These were left-over figures from the Middle Guard set painted up a while back. The set comes with grenadier and chasseur bearskin head sprues, as well as the shako heads. 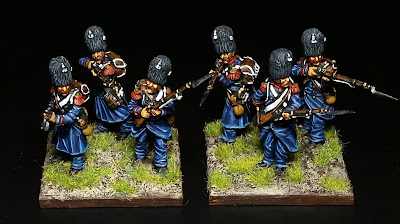 Vallejo Dark Prussian Blue works well for the base coat of the clothing. Varying amounts of white added to the blue are used for the highlighting. 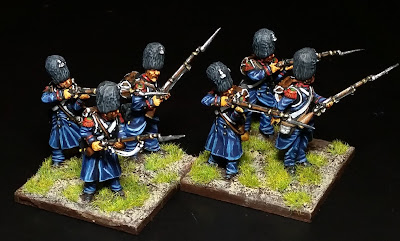 The Guard greatcoats were generally of higher quality than those of the line; including piping around the collars and cuffs. They have an elegant look which rivals full-dress, IMO. 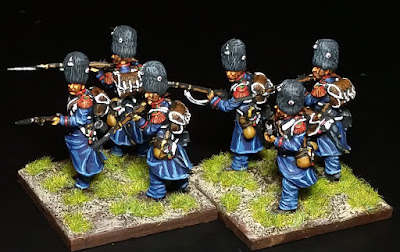 There should now be enough units of foot skirmishers for a cavalry-centric game. 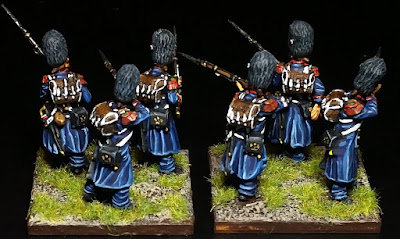 Up next, well after I do some home-owner repairs, will be the Perry cavalry - Scots Greys and French Lancers. Until then, wishing you all the very best during the holiday season!
Posted by DeanM at 7:32 AM 35 comments:

These are two small units of skirmishers which I hope to use as infantry support, along with Rifles and Voltigeurs (also in small units), in a mainly cavalry Black Powder game.

KGL LI on the left and 71st Highland LI on the right. I quite like the look of buff colored straps and belts - as on the 71st. 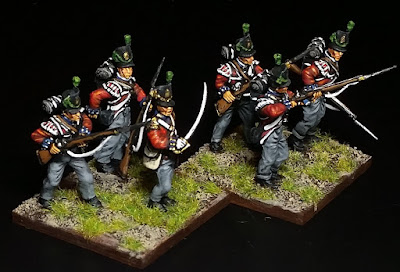 The majority of my other British infantry are in stovepipe shakos - but I rather like the later Belgic shako too. Particularly the cords and side plume. 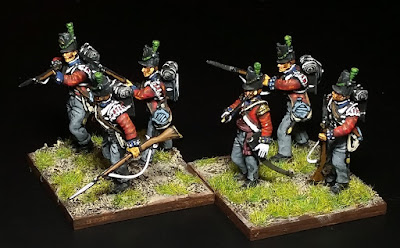 Painting British are a bit simpler overall than French. The latter having a lot of piping and lapel work. However, painting French elite fringed epauplettes are much easier than painting British wings. 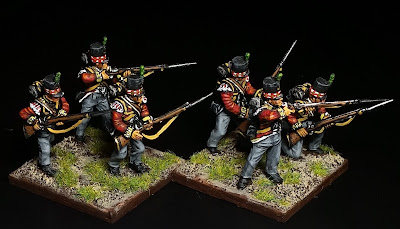 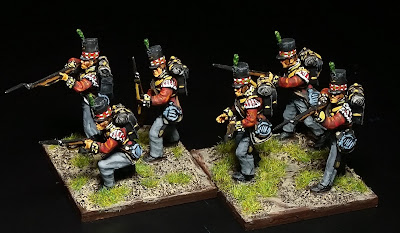 Before starting on the Perry cavalry, I may work on some leftover Victrix Middle Guard for a small unit of skirmishing Chasseurs a pied. Thanks again for dropping by and wishing you all a great December!
Posted by DeanM at 6:34 AM 53 comments:

Started on some Victrix British Light Infantry yesterday, while awaiting the arrival of Perry Dutch Lancers and Scots Greys. The stovepipe shakos had the brass plates scalpel'd off to allow the diced band to represent the 71st Highland LI. The others are in "Belgic" shako with green cords and plume. They'll both be in 6-man units to represent small units of skirmishers.

I checked the mailbox in the afternoon, and wouldn't you know it, there was the Perry package. 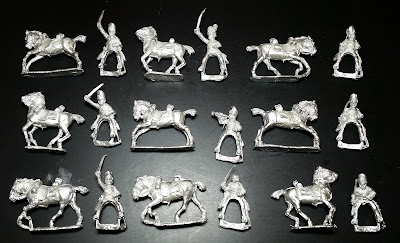 As usual the figures were in small boxes with synthetic wadding which tends to stick all over the figures. 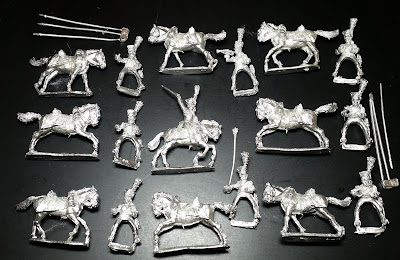 Note the Colonel Colbert figure in the center - he's a one-piece casting which the Perrys make sometimes (e.g. the Choson Korean cavalry). I normally paint horse and rider separately, so I'll have to think about this one.

Anyway, thanks for dropping by and just wanted to show what's in the paint queue. Napoleonics are much like the Mafia - "Just when I thought I was out, they pull me back in!"
Posted by DeanM at 9:04 AM 23 comments: