The armor is on a display stand, tucked away in a corner of the living room. The haubergeon fits over a shirt since the arming jacket is too thick for it. This is actually the "look" I was shooting for. It's based on examples from the late-14th C. - particularly from the Churburg collection in Italy. For the record, I sprayed the aluminum mail haubergeon with a can of Testors Graphite Metallic - sort of a gunmetal color, to darken it. 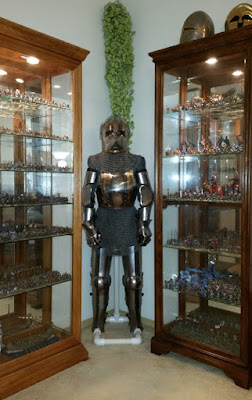 This is Version 3 of the armor stand. The width was shortened by about an inch, and the sides of the T-section at the shoulders cut off. The earlier tubing for the arms aren't used, and the arm harnesses are tied directly to the tube at the neck, as well as the gauntlets. That is, the arm harnesses and gauntlets hang down freely - but some of the weight rests on the hips. 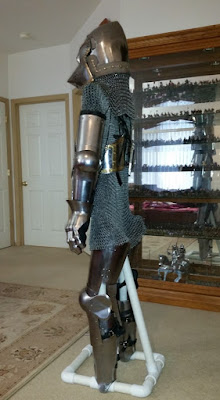 A stabilizing tube was added the rear using a couple of T-connectors. The tube base was weighted down  by pouring sand into them - a tip from fellow blogger Simon Q.  As it is displayed in the corner of the living room, only the front will be seen and no side-viewing. 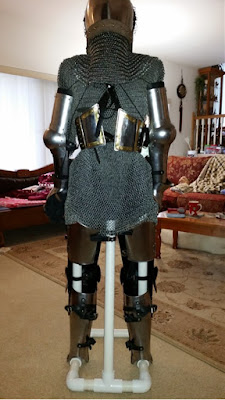 This has been rather cathartic and I may now start painting and gaming again in the new year. All the cool kids around here are talking about Dragon Rampant, which could be a reason to dust off the Empire troops. However, the Napoleonic troops may be in need for some Black Powder'ng first.
Posted by DeanM at 11:28 AM 21 comments:

Wishing You All A Very Merry Christmas! 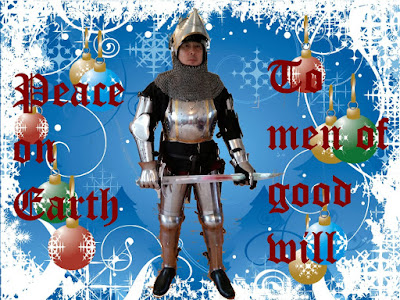 The arming jacket arrived today - the leg and arm harnesses much more comfortably now. Only thing is the mail haubergeon doesn't fit over it. It was a tight fit to begin with, and the arming jacket is padded. I'll just use the mail for the display stand. The jacket is pretty impressively constructed - it has tying points with brass tips. 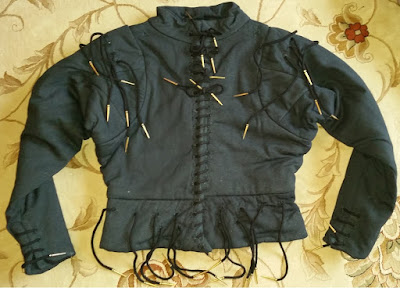 I may add another leather tab on each leg harness as there's plenty of ties. There's currently only one tie-off point on the front center of the legs. One on the outside would help distribute the weight better. 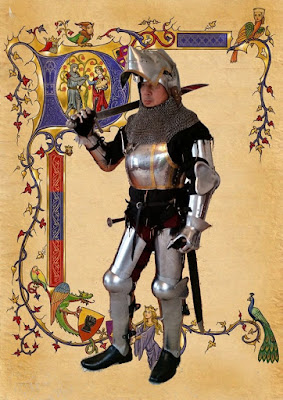 Several more gratuitous shots while my wife was still willing to take them. I kept interrupting her in the kitchen while she was preparing a Christmas Eve meal. Besides taking the pictures, I needed her to tie off the arm harness and the back straps for the breastplate. 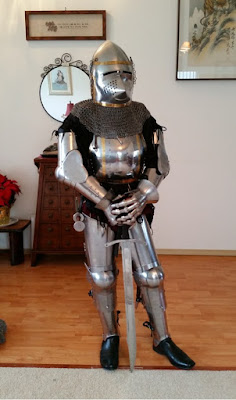 Breaking a bit of sweat while getting in the armor, my wife laughed at the thought of me wearing it in the summer. 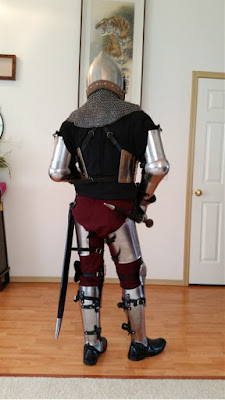 The kit is pretty much done now. The only things I could add are sabatons, a haubergeon that fits over the arming jacket, and maybe some padded chausses. 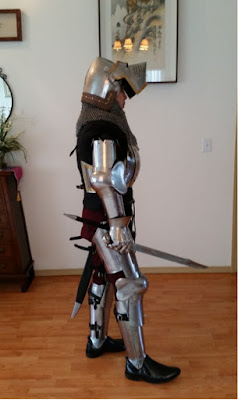 So much for now - Wishing you all a very Merry Christmas! 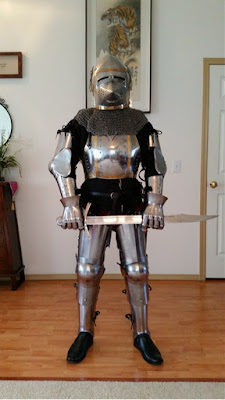 Using some 45 degree angled connectors, redid the torso to accept the breastplate. The shoulders and stance still look a bit wide, but need to ensure stability. 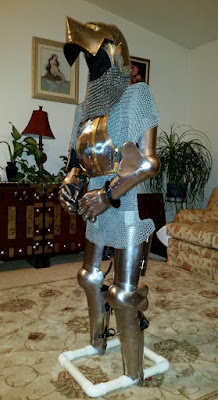 A note on using PVC cement - it dries almost instantly. That is, make sure you have whatever you're cementing in the right position from the start. I ended up having to cut a connection apart and using tubing fitting inside to correct the positioning. 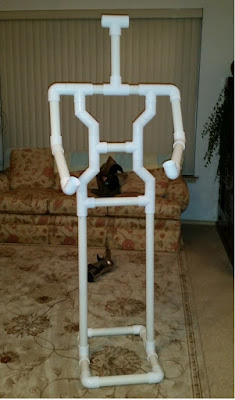 Pipemann in all his glory. For the record, I used 1 1/4 inch tubing because the cost., but 1 1/2 or 2 inch would be a lot more sturdy - and expensive. I spent about $40 USD for the entire build. I may get a weighted base and secure the ensemble onto it. 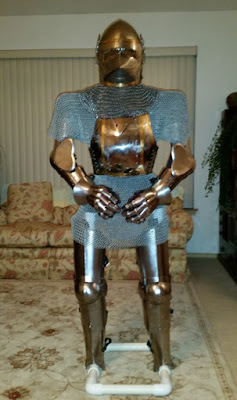 The tubing can take the weight, but the only thing is the possibility of it tipping over. It's not top heavy, but I don't trust leaving it next to a glass cabinet - which is where I wanted to put it in the corner of the living room. 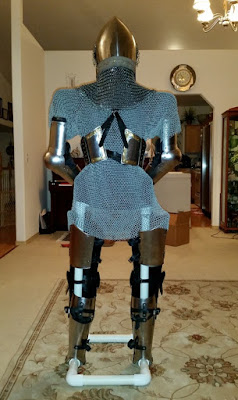 Yeah, gonna have to reduce the width of the shoulders. 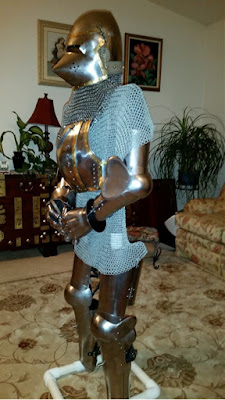 Although the aluminum mail haubergeon is useless for any type of fighting, its light weight is nice for the display. I will likely spray paint it a darker silver - like gun metal.
Posted by DeanM at 10:10 PM 16 comments:

The uprights are too wide apart to fit the breastplate; and I got over-zealous and cemented the top pieces so have to pick up a few more T-sections and a short length of tubing. I'll also shorten the legs a bit too. 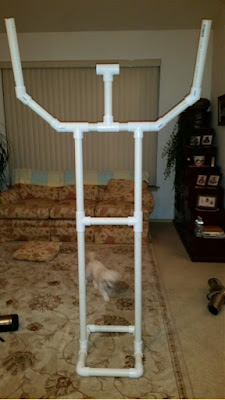 I'm waiting on an arming jacket which will block the see-through mail. The arms a bit too wide too - I'll see what other kind of fittings are available. 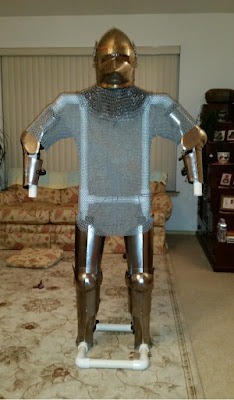 The gauntlets also need to be rigged on the ends of the "arms." 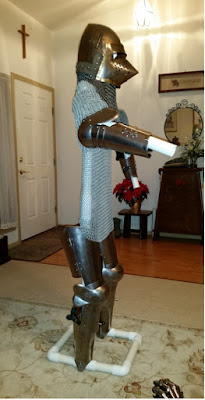 Tried my hand at building a display stand for the armor using PVC tubing from the local hardware store. Found a tutorial online and it really is pretty simple. Here's the lower half - holding the leg harness pretty securely. 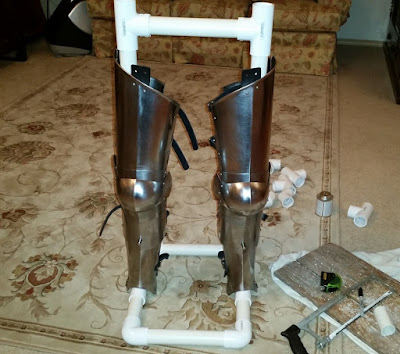 The bottom of the greaves fit nicely onto the tubes at the base. 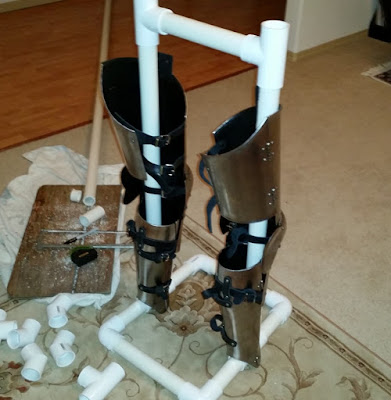 Tightening the straps behind the knee cops hold the whole harness up on the tubing. 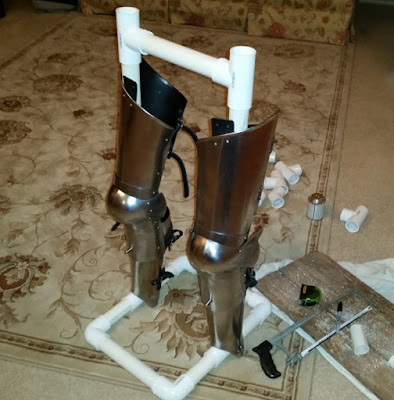 Enough for now, as this was a spur of the moment project. The top half and arms will follow.
Posted by DeanM at 6:30 PM 14 comments:

In a momentary lapse of judgement a couple of months ago - the last week of October to be precise - I stumbled upon a site offering free shipping on all of their product. So, rationalizing the cost of what I "needed" as costing less than six months worth of speeding tickets I should've gotten, I pressed the order button. Lo and behold, the stuff arrived today - it only took them about 30 days to make the pieces using measurements provided. It was hammered out by craftsmen in the Ukraine and arrived to the US late last month. It hung around US Customs for about two weeks, likely due to the holidays and possible bias towards our Crimean brothers. Here's the box after opening it. 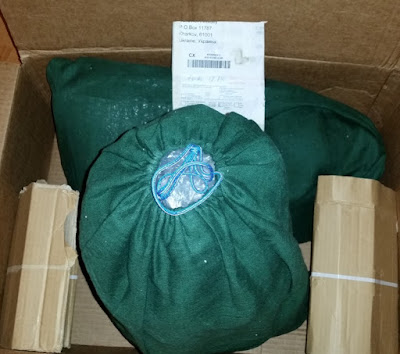 The pieces were packed in those "sand bags"-  leg and arm harnesses for each side in each bag. Very cleverly packed within each other and bubble wrapped. Here are the pieces laid out. 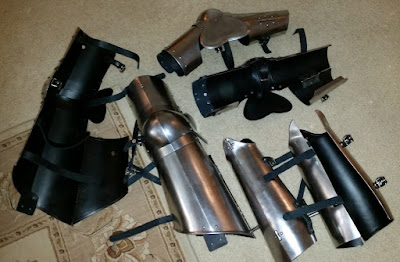 Even though I got home from work late in the evening, I knew I just "had" to try the pieces on to ensure the fit. I was able to put everything on by myself - not like my wife was in any mood to help me anyway. As I was straining to buckle each strap, I was thinking "this has to one of the stupidest things I've done." Well, at least recently. 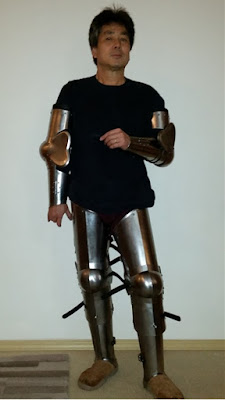 Once everything was on, it was clearly evident the next thing needed will be an arming jacket to tie up the harnesses from wanting to drop down. Wearing more padding will also help fixing the armor in place. Sabatons would also be nice - until then house slippers will have to work. 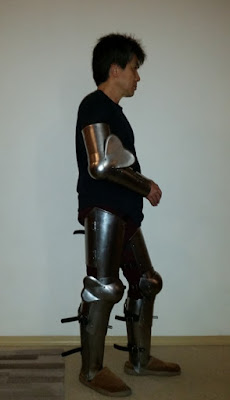 This armor is made for full contact combat and definitely feels like it would handle more hits than the wearer inside of it.
Posted by DeanM at 8:13 PM 24 comments:

Ah, another non-gaming/painting post, but a post nonetheless. Just had to try on the haubergeon made out of aluminum that arrived in the mail today. Amazingly fast shipping from India using DHL delivery service; four days from ordering it off of ebay. It was only $48 USD including shipping, so had to get it. I know, I know, I could've picked up box of Victrix Hoplites for around the same price...forgive me. Anyway, it's under 10 pounds - haven't weighed it, but it's supposed be about a third lighter than steel. Can't see wearing that weight since I don't plan on getting bashed around in combat. It is a bit bright, although anodized; I'll see how I can darken it - either by spray painting it or possibly chemically treating it. 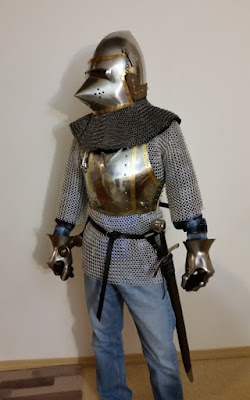 The aventail is steel and you can see the difference in color. Incidentally, I shortened the aventail by several rows, as it hung down too low for my tastes. I also lowered the bascinet visor by drilling new holes and filling the old holes with solder. Nothing major, but now the eye slits line up perfectly. 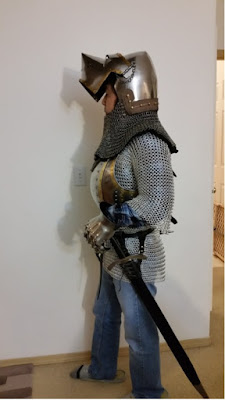 The frogging for the sword scabbard is another ebay cheapy - $8.00 USD, but works very nicely.

Black leather dye was used on the dagger sheath to match the rest of the harness. The dagger was shortened by about an inch using a hack saw and file; the sheath was shortened as well. Leather thongs from JoAnn's was used to suspend the sheath using a method seen in period illustrations; basically looped over the belt. I stitched the thong to the sheath, I also stitched the aventail liner to the inside of the helmet - even my wife says I'm getting good at sewing. Well so much for now - I am  hoping to add leg and arm plate armor in the near future. Might try making mail sabatons with the left over rings from the aventail shortening. Happy Holidays to all!

UPDATE - after soaking the mail overnight in a bucket of bleach, it was then sprayed with Pam cooking spray. It now looks a bit darker and more realistic. 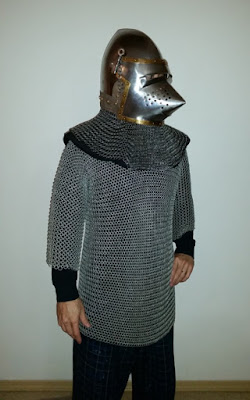 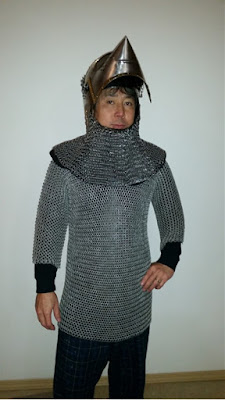