Finally painted this piece up today; it was an ebay purchase some time ago. I was motivated to paint it up for a Muskets and Tomahawks scenario, of all things. It is planned to be a facsimile for the Dauphin Gate of Fortress Louisbourg. The actual gate was a bit more stylized, but this should work nonetheless. The obligatory Empire troops are stage around it for now. 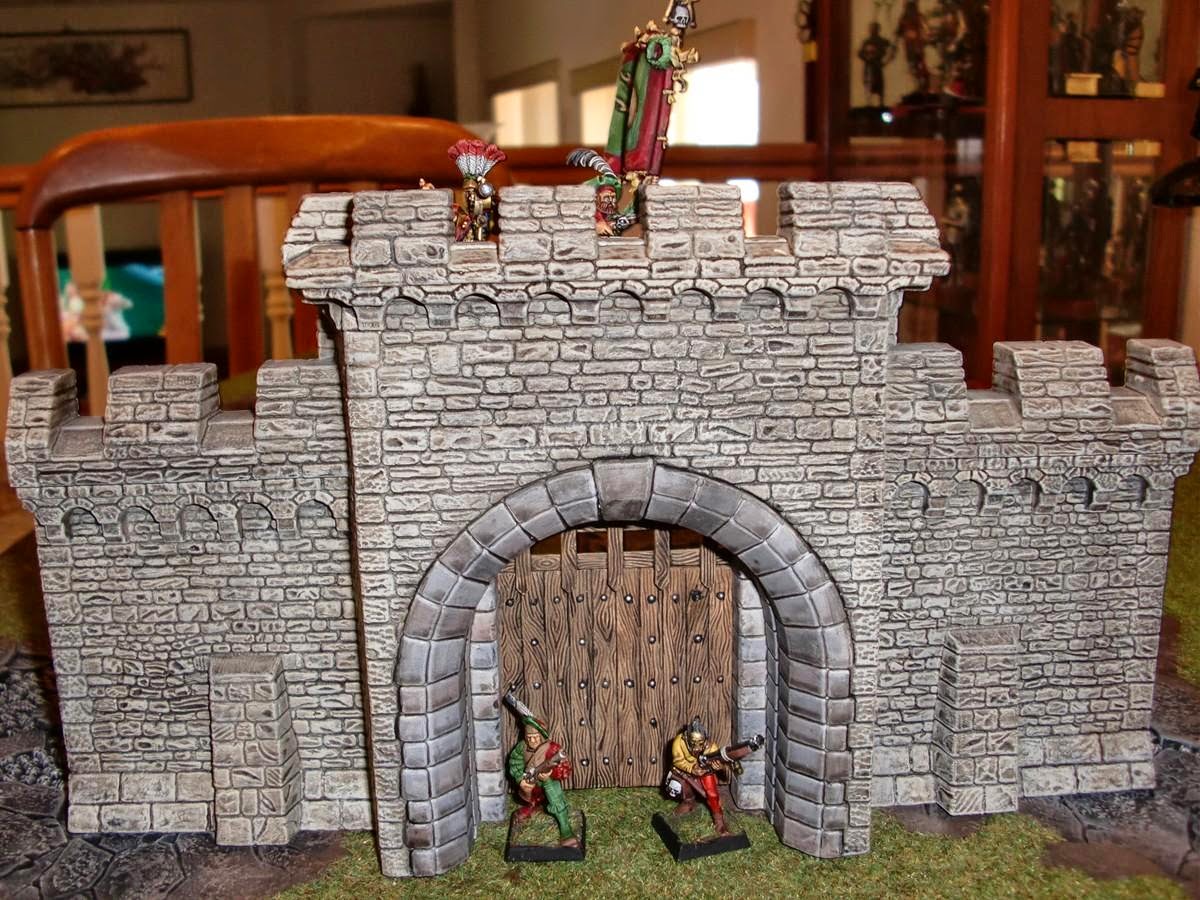 The walls were painted with Ceramcoat Sandstone, stained with Minwax Tudor Satin, and then dry-brush again with Sandstone - after being sprayed with Testors Dullcote. The stonework around the gate was given various shades of greys. The gate and portcullis were painted a light brown - with metal parts picked out in blackened steel. 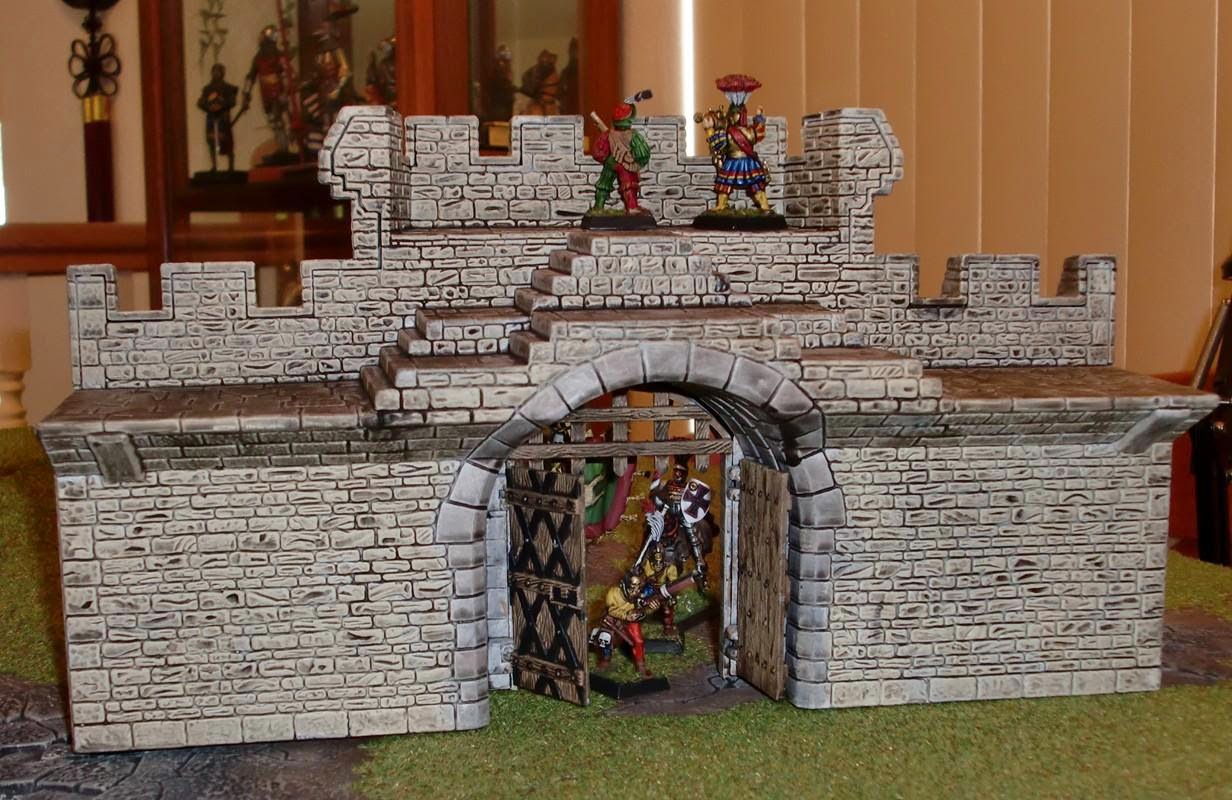 The only thing in the painting queue right now is a lone Front Rank General Wolfe figure. However, due to the great weather here, I've been spending a lot of time in the yard. I tend to go overboard once I start pruning trees.
Posted by DeanM at 5:42 PM 26 comments:

So here are the final two command stands for the Bosworth Field project. These two, Stanley and Northumberland, will be commanding the units that will either support or turn on Richard III. In reality they both did, the former by actively taking part in the fighting, and the latter by not committing his forces. 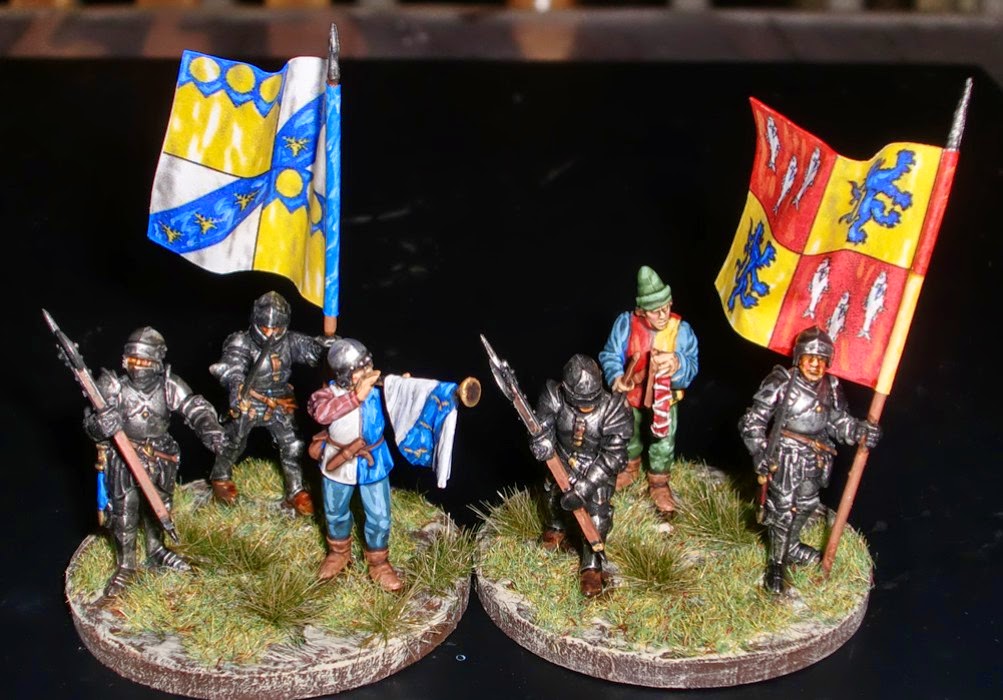 I plan to use some kind of mechanism to allow either to support or turn on Richard for the game. 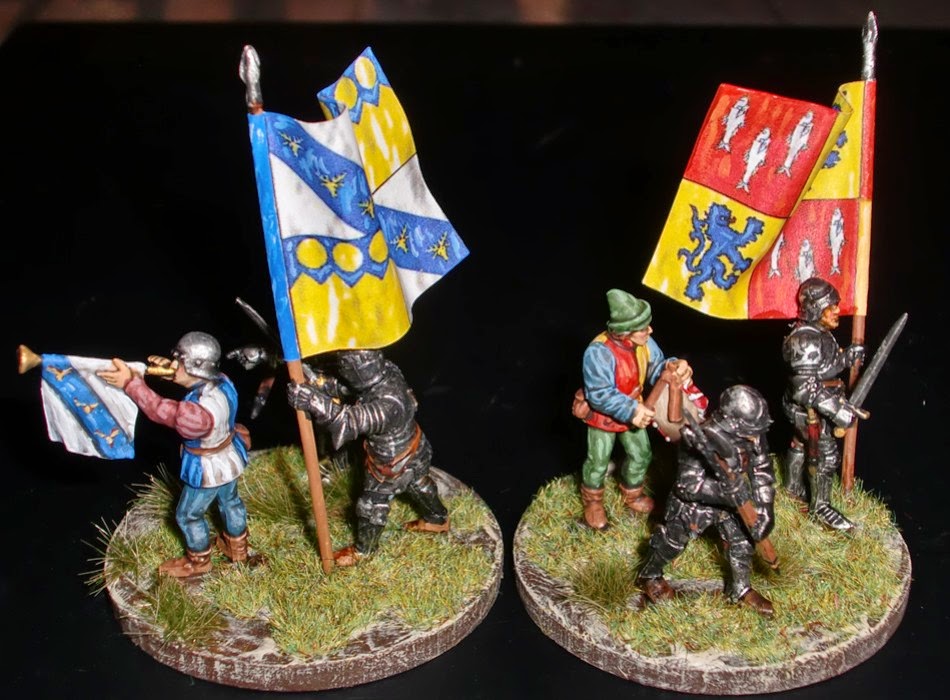 The nice flags were once again downloaded from the Grumpy Wargamers site. Figures are from the plastic Perry War of the Roses Infantry set - except for the drum which a left over from the European Merc set. 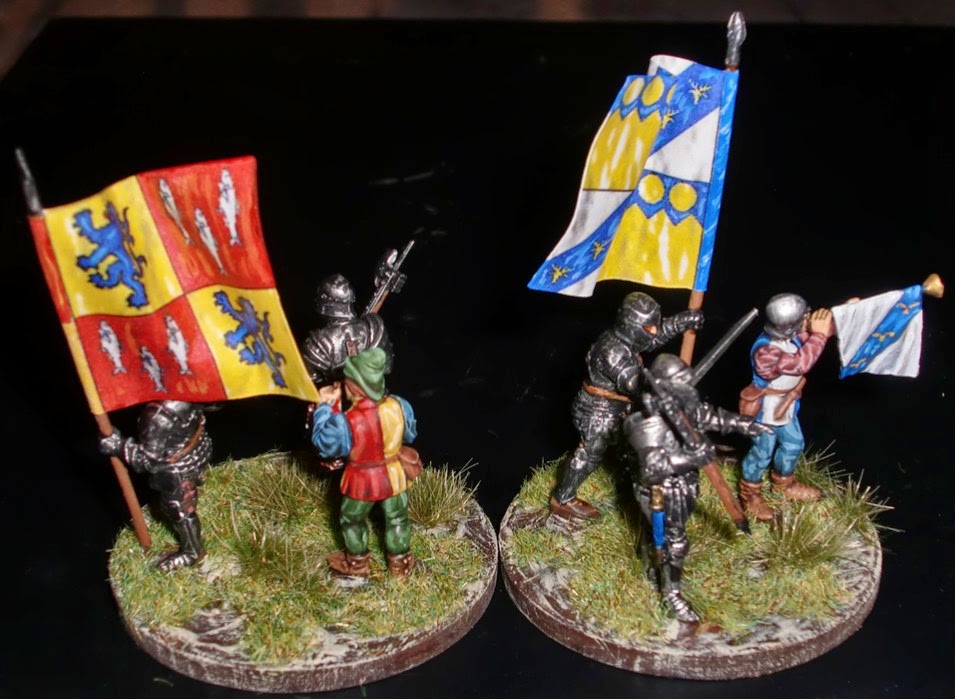 Both of these villains were fated to experience ignominious deaths: - the earl meeting his demise in 1489 during a tax revolt; Sir William losing his head in 1495 after yet another act of treason - this time against Henry. Interesting times indeed.
Posted by DeanM at 7:15 PM 27 comments:

"To the strongest" - Successors WAB Game

Being Northwest Historical Miniature Gaming Society's monthly game day today, Old Bob from Oregon and I met at the Game Matrix in Tacoma, WA for a fairly large Successors game using WAB 2.0 for rules. Bob brought his Ptolemaic army and I dusted off my old Seleucid army. As may be evident in the photos, I haven't rebased my phalanxes to the more optimum three ranks for wider frontage per 2.0. I don't play WAB often enough, so don't really mind when the Cool Kids lap me a bit in Combat. Pat L. (Socal Warhammer) also showed up with his Seleucids and played Bruce D.'s NKE army (which hadn't seen the gaming table for several years also).
Anyway, we played a grueling 6 Turns and the Ptolemies got the better of the Seleucids through superior dice rolling. For once, I can say I was very satisfied with my tactics - but I am convinced my dice rolling is worthless. For instance, I don't remember how many times I rolled 14 dice and scored 2 hits - followed by even less wounds. My Army General with 3 attacks normally had no hits whatsoever! Oh, and when I needed to roll low for Leadership tests, I'd roll 9's or 10's followed by 11's or 12's with the Army Standard re-roll. Anyway, it was nice to take the Seleucids out from the cabinet where they hadn't seen any action for several years.
Posted by DeanM at 8:01 PM 40 comments:

Less the command figures - which will be done next. After Dullcote-ing the Minwax finish, some quick highlighting was added. The pikes will round out a unit with figures from the previous box of Mercenaries. They will be part of the force for Stanley. The bows will beef up the existing Lancastrian units; and finally, the billmen will flesh out the Yorkists, as well as a few for Stanley. 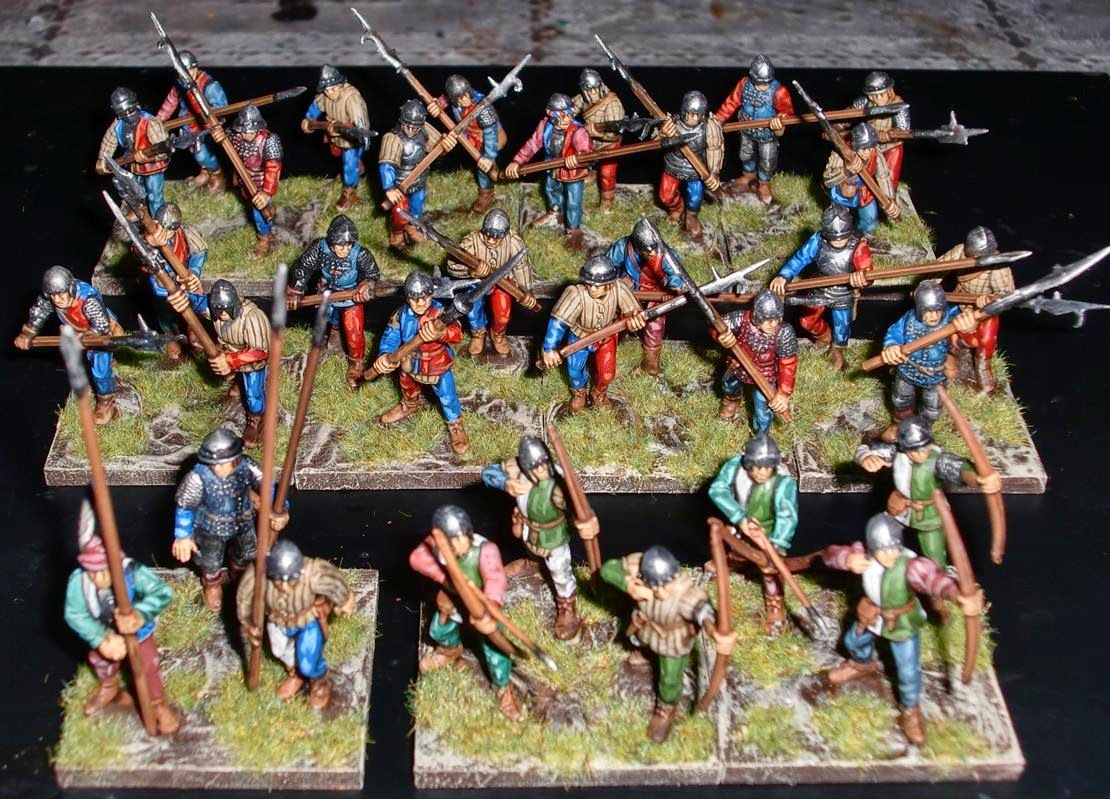 I don't plan on acquiring/painting anymore figures for this project (Bosworth Field using a simplified version of Hail Caesar), as I'm now interested in a Siege of Louisbourg game using a simplified version of Muskets and Tomahawks. Hopefully, the three boxes of Perry figures and an equal amount of Old Glory figures should be enough - units being scaled down to be representational more than anything. 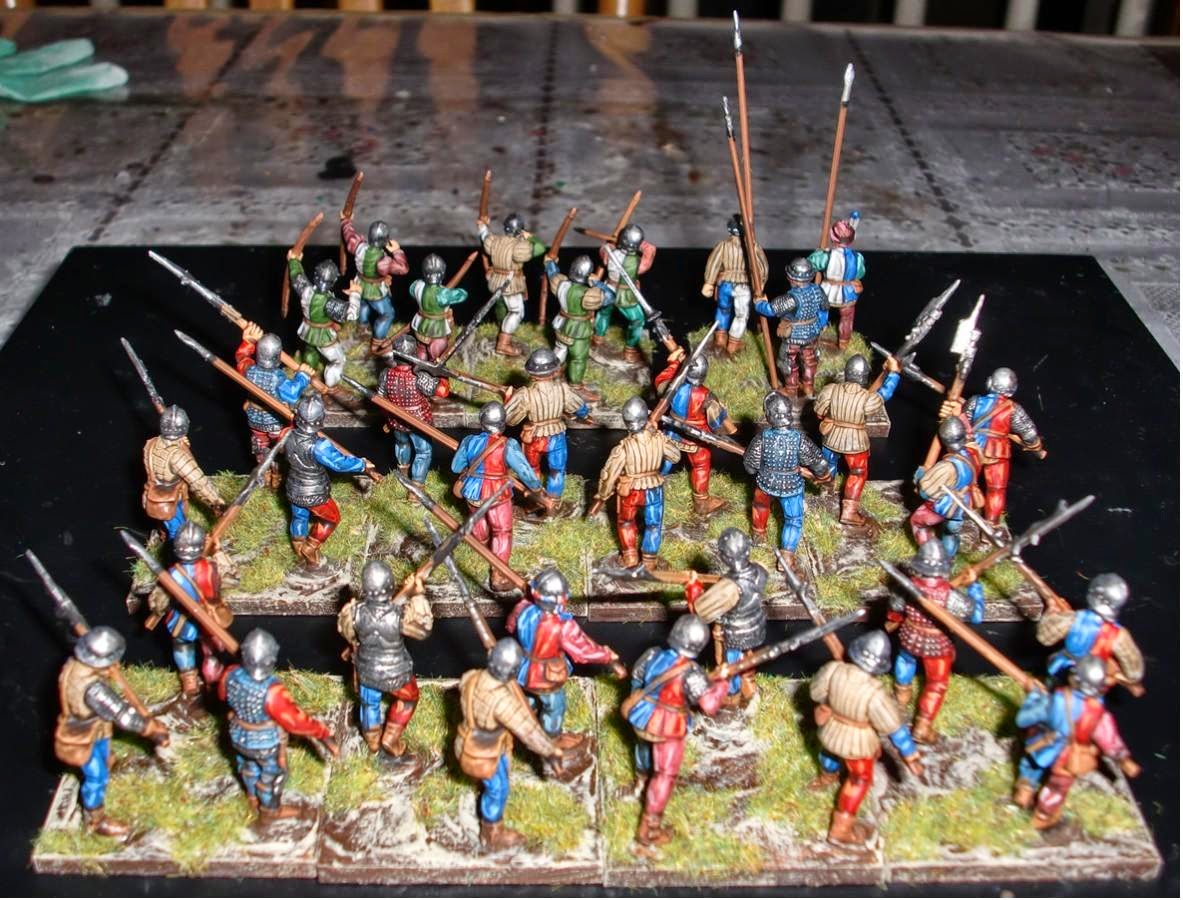 As soon as the command figures are painted, I intend to set up the units to get a better idea of planning the game/scenario.
Posted by DeanM at 12:48 AM 32 comments:

Block-painted and freshly stained with Minwax. Still have the fully armored guys and the two musicians to paint, but this is the bulk of the figures from the second War of the Roses Infantry box for the Bosworth Field project. 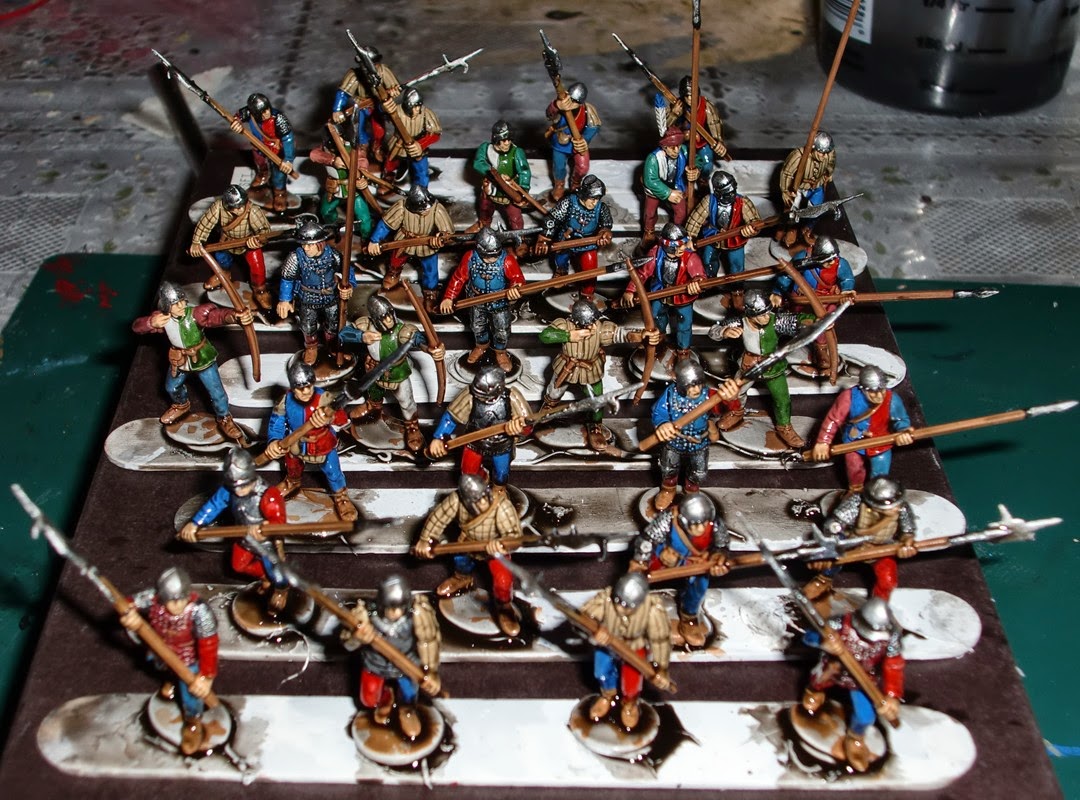 I like how the rivets/studs show up on the rear of the brigandine jackets. 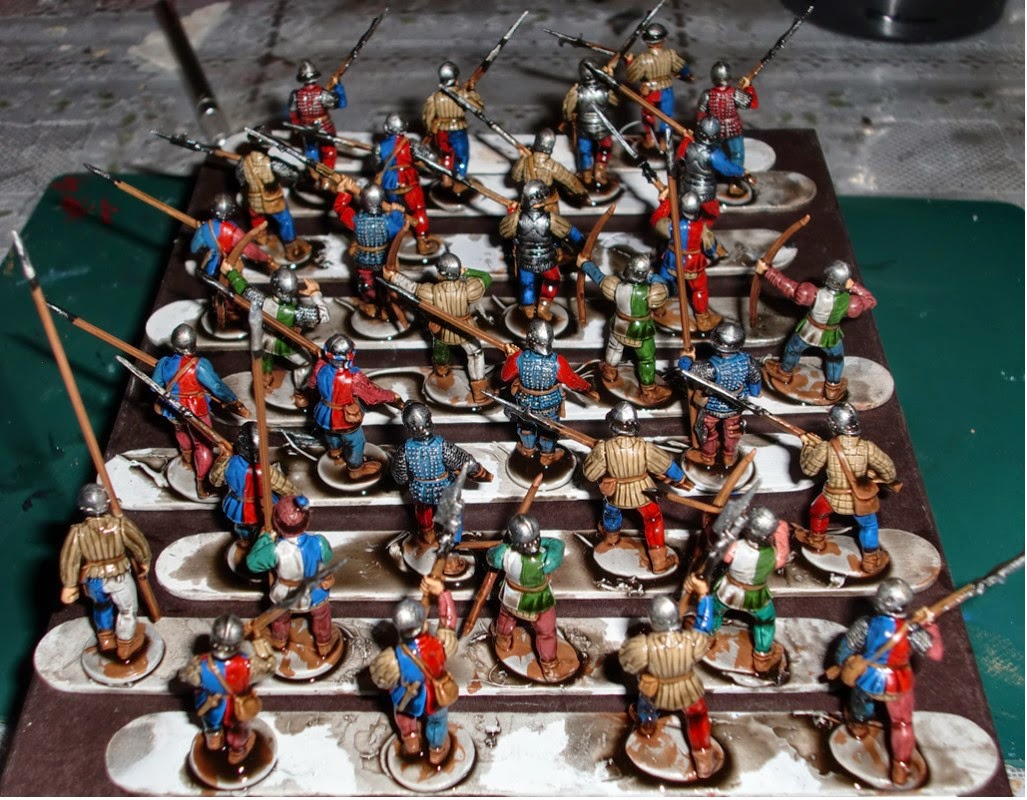 They'll be given a shot of Testors Dullcote when dried - and some highlighting will also be added.

Here they are block painted right before the stain was brushed on. 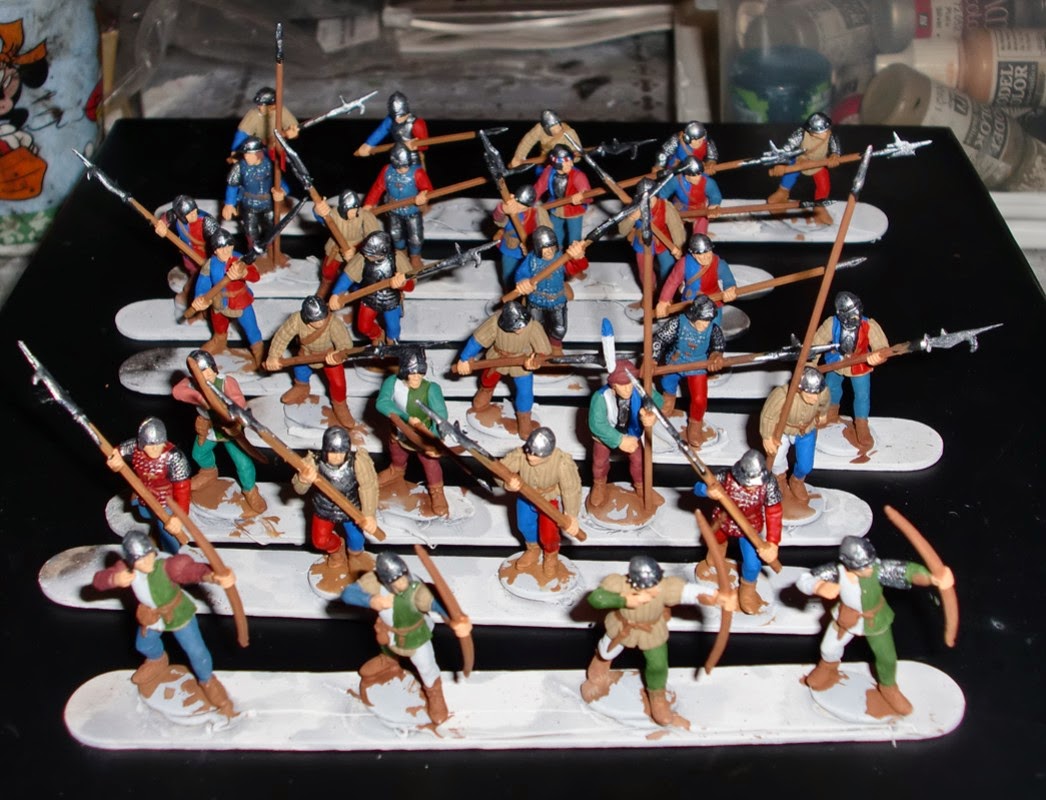 Picked up a second box of the plastic Perry War of the Roses Infantry set. Using a few spares parts from the earlier Perry sets, as well as several modified halberdier arms from some Games Workshop Empire guys, I was able to build several more units of billmen and pikemen. Two more foot commands and a few more longbowmen for the Lancastrians were also built. Once these are painted and based, they'll be set up on the table to see if more figures/units will be needed for the Bosworth game. I plan to have six commands - three Yorkists and three Lancastrians. Here are the newest figures after basecoating and flesh areas painted. 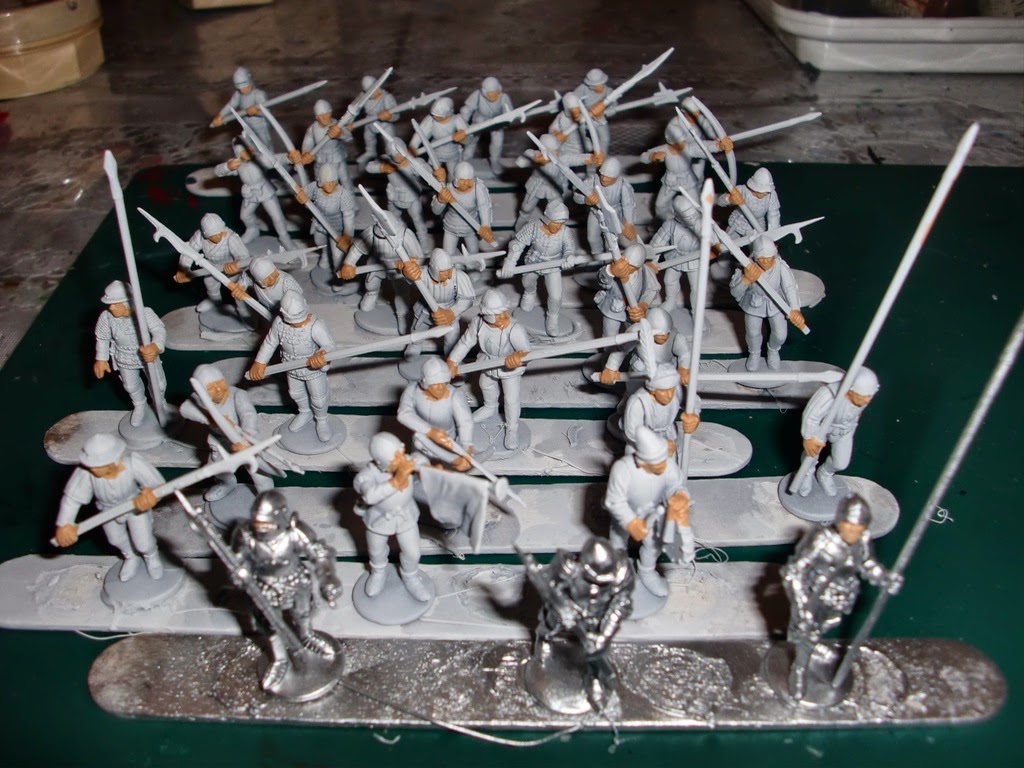 A handful of the Northwest Historical Miniature Gaming Society members made it up to the Flying Heritage Collection up in Everett, WA today. The newly "elected" president of the society, Sven Lugar, coordinated and hosted a wonderful event thanks in no small part the to Flying Heritage folks. Not only do we get in for free, but we get a personal tour of the collection. Today they flew several WW2 vintage aircraft in the marvelous weather. There was a Zero, P-47 and a couple more fighter aircraft which I failed to see. I only saw the Zero when it was taxiing after it's initial flight when I got there.

On the gaming side, Pat L. (Socal Warhammer) set up a WAB tournament, but due to lack of participants showing up it was basically a small affair. In the morning session, I had my Campanians weather the brutal attacks by my buddy Scott's Late Republican Romans. I failed to use my light troops more effectively, and basically had my two hoplite units take on several of his pila wielding units. Here are a few shots from the game.
Pat played his Seleucids against Scott's Romans in the afternoon. Thanks to our extended lunch, we missed the fly overs of the WW2 aircraft. Here are a few shots from the venue:

Besides the WABing - there was a Bolt Action game, an All Quiet on the Martian Front game was hosted by Sven, and a Muskets and Tomahawks game hosted by Daryl N. - which I got to play in for the first time. I really like the rules and plan to pick them up soon.


I managed to get a clip of the Zero taxing when I first showed up in the morning. Sven caught the other aircraft and should be posting the video on the NHMGS Facebook.
Posted by DeanM at 6:01 PM 20 comments:

The mounted figures are all Old Glory save the figure for Henry which is a Crusader mini. The foot guys are all Perry plastics from either their WotR Infantry or European Merc sets.

Close up of the Yorkist commands: 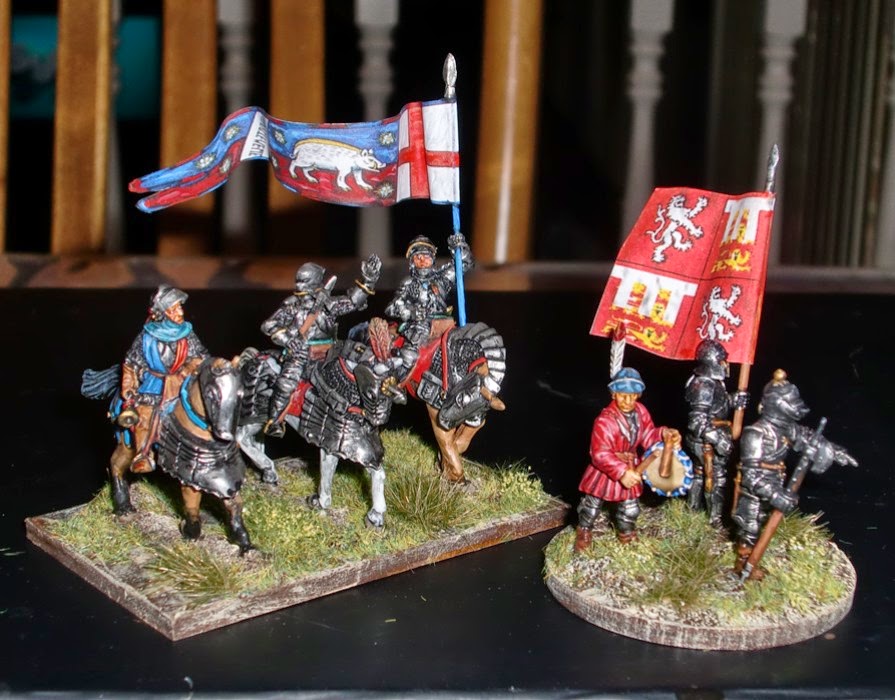 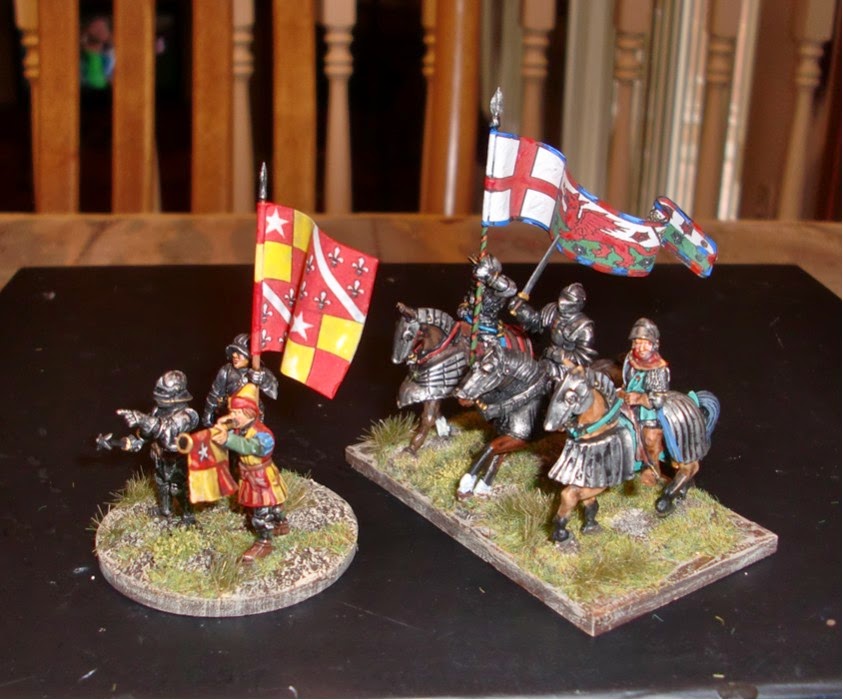 I plan to get a couple more boxes of plastic Perrys, and also have commands for Stanley and Northumberland. This in spite of my initial concept of using mostly figures I already had for the Bowsworth game. At least I won't have to get any mounted or dismounted knights - I have enough of them already.
Posted by DeanM at 7:54 PM 27 comments: