As I was intending to host my Bolt Action Franco Prussian game at Enfilade in May, I wanted to add a Mitrailleuse "grapeshot" volley gun. I was hoping Soren at Eagles of Empire would have one ready in time, but it seems he had a few more projects in line before getting to it. Perusing the internet, I stumbled upon Spencer Smith Miniatures and found one in what is listed as 30mm. However, the site states that these match up quite well with current 28mm figures. As Foundry's range is quite smaller than most 28mm, and especially the largish Eagles of Empire figures, I figured I'd give Spencer Smith a shot. I'm glad I did as they do indeed match up very well, size-wise, with the 28mm figures I have for the period. 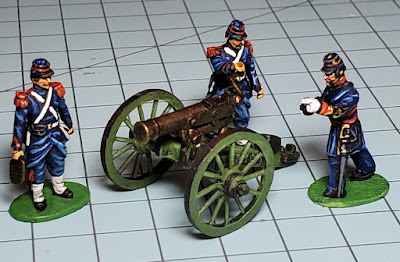 The sculpting is sort of "old school" with minimal details and somewhat static poses. The catalog list this range, as well as several others, as "Classic." In any case, the poses are fine for artillery such as these. Due to the these attributes, the figures painted up quite quickly. I haven't based them as I'm waiting until Hobby Lobby opens up again. 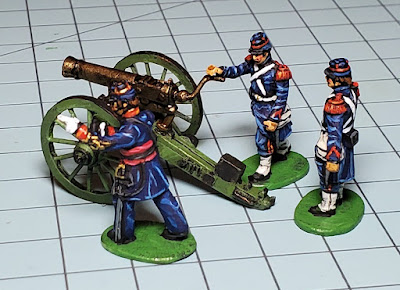 It's cool that the gun has a nice hand crank for the gun. There's a YouTube video showing the firing of reproduction of one of these. 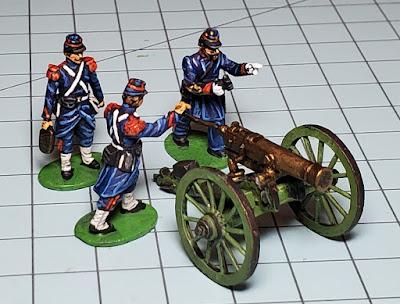 The overall effectiveness of the gun in the Franco Prussian War was not impressive. A few contributing factors for this was its employment as field artillery and not used closely with the infantry. It was also slow to load and acquire targets, particularly with inexperienced crew. 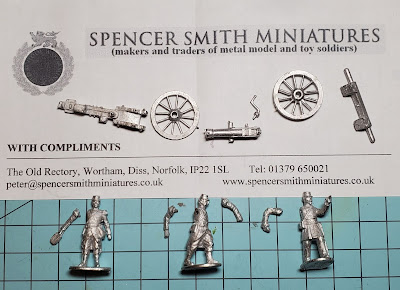 Peter at Spencer Smith is a great guy and ended up sending me two orders. My original order was sent to my old address which was still in Paypay. Because of this the order was lost in the mail, and once we discovered this, Peter immediately sent a replacement set (free of charge) to m current address. 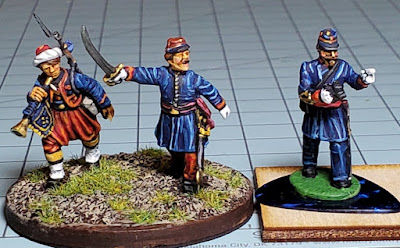 As mentioned, these "30mm" figures size and scale up nicely with 28mm, in this case Perry plastics.

Well that's all for now; wishing you all good health and the best of hobby endeavors during our current state of affairs.
Posted by DeanM at 7:48 PM 36 comments:

I went ahead and set up the La Haye Sainte table - just to see how things would look and fit. As I don't expect any in-person gaming anytime soon, figured this is one way I can let folks see what we could be doing once things get better again. Without further ado, here's some pictures I took with appropriate captions below each of them.

View from the east of looking at the Main Gate of the Farmhouse and the Brussels Highroad. In the bottom right corner of the picture is the Sandpit with a unit 95th Rifles.

French Engineers attempting to break down the barricades at the Main Gate. French Legere supporting them in their endeavor. Major Barring directing his KGL Light troops from the gateway. Light Company men of the 5th KGL Line have arrived to support their Light brethren.

North of the Farmhouse KGL Hussars speed down the roadway to assist; 79th Highlanders also advancing in support. 95th Rifles occupying the Sandpit, with an RA battery covering.

View from the south, with the Orchard and Barn in the foreground. The pond is just in view in the lower center of the photo. The Nassau troops had large cooking pots with them and these were used to help put out the fire in the Farmhouse.

A bit blurry, in the center, within the Orchard KGL Lights are exchanging musketry with French Voltigeurs. Another French battalion is approaching. In the actual battle, the Orchard was lost to the French early on.

Scene west of the Farmhouse. Another French battalion is advancing towards the rear door of the Barn. The night before, during a heavy rainstorm, the KGL troops occupying the farm had torn down the Barn doors and used them for firewood to keep warm. A makeshift barricade was made and this area was heavily contested throughout the battle. French Horse Artillery supporting an attack by a French Heavy Cavalry Brigade.

I'm not sure if the Red Lancers were part of this particular part of the battle, they are here for this game - as well as more French Horse Artillery, this one being a Guard unit.

5th KGL Line Battalion in square to meet the charge of French Cuirassiers. The 8th KGL Line wasn't so lucky and were cut down. Scots Greys charging the the flank of the Cuirassiers.

French Carabiniers being fired upon by RHA and Nassau troops.

Looking northeast of the battle with the Kitchen Garden being defended by Nassauers. Scots Greys rushing to save the KGL Line troops. Hanoverian Verden Field Battalion, in line in the distance.

View from the north - this is approximately the side of the battlefield where Wellington and his troops were staged.

Well so much for now. Hope you enjoyed the images and maybe someday it'll be actually wargamed. Until next time best of health to you all!
Posted by DeanM at 4:34 PM 43 comments:

These will be used in the La Haye Sainte game - soon to be appearing in a safe environment  near you.

The 5th and 8th Battalions of the Legion were ordered to support their Light troops comrades holed up in La Haye Sainte. They were attacked by French cavalry enroute and the 8th Battalion was virtually annihilated. The 5th Battalion managed to form square and were saved by units of the Household Brigade. Sadly, their commander, Colonel Umpteda was killed in the engagement. 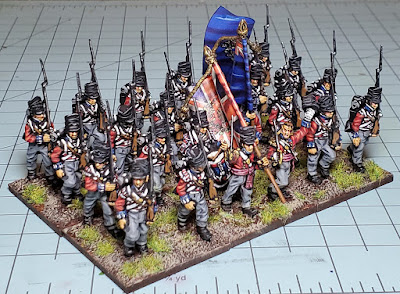 Although this set comes with a KGL flag, I had a Victrix one and used it instead. It's a little bigger than the Warlord one, but the details look nicer, IMO. 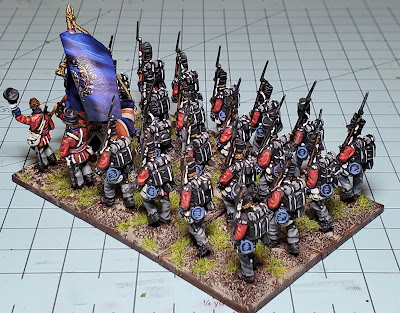 These are really nice figures for what they are - that is rank and file in marching poses. One thing to remember when painting these is not to paint them up as you may Victrix or Perry figures. That is, they aren't molded with separate arms, so when painting them you will want to leave areas like the areas between their arm and body/musket black. This way the arm won't look so wide or over sized. Leaving black lining around other areas, like their hands will also help in the overall look. 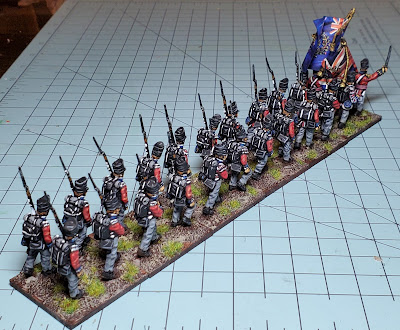 Thanks for stopping by and wishing you all good health and happiest hobby endeavors during these trying times.
Posted by DeanM at 1:13 AM 36 comments:

Started on these the other day; almost finished. Just some highlighting and a few other things left to do. Wanted to paint these up as a unit of KGL Line for the La Haye Sainte game. 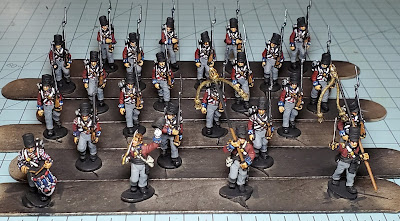 As with the French Infantry set, these are really quick to build - just heads and backpacks. I'm not using the Minwax stain method as they seem to paint up nicely with a black undercoat. 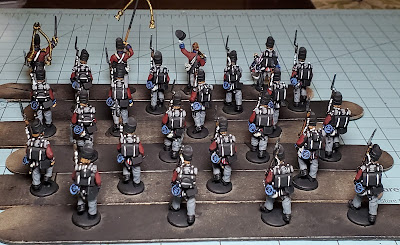 Speaking of the La Haye Sainte project - seems I may be diving into this sooner than later. I was holding off on this game until wrapping up the Franco-Prussian War Bolt Action game I was to host next month at our big annual convention, Enfilade. However, with the current "hang fire" order in our area (as elsewhere), the convention was cancelled. Now I can concentrate on Black Powder and not confuse myself with Bolt Action rules. Until next time, wishing you all the best of health and safety!
Posted by DeanM at 8:41 PM 37 comments:

These are the figures that came with the Vistula Legion set. They are the same sprues as their normal French set, including the shako/bearskin heads. Really nice figures with minimal parts - body, head and backpack.

The Vistula set doesn't come with a flag or standard bearer, so I used a spare Victrix one with the number 4 repainted on the flag. 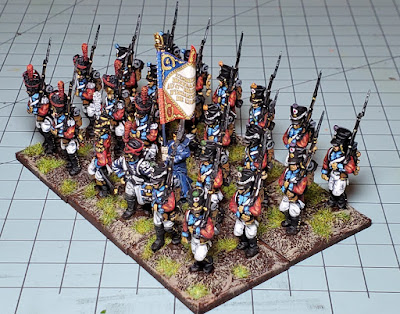 Plan to add some Brigade Games Voltiguers as they have full gaiters which will match the rest of the unit. 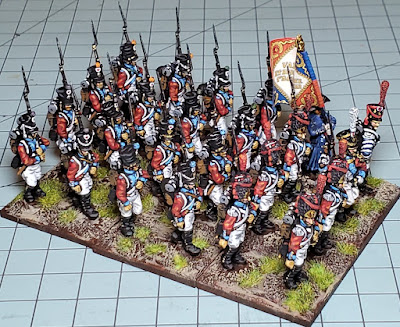 I really like this set from Warlord Games. Very nice details and in full-dress, which I like the look of for Napoleonics. Although, the ones from Victrix and now Perry in campaign dress (trousers) look cool too. 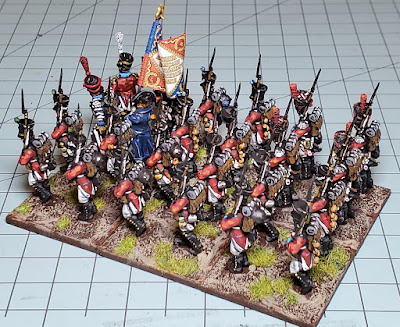 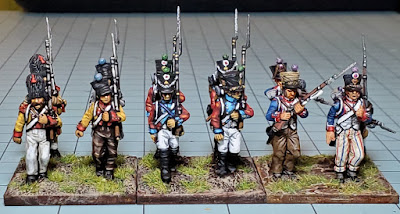 Now that these are done, I can give my back, neck and left arm some rest. In fact, I think painting is what's causing a lot of my neck and back/arm pain. In any case, wishing you all the very best and hope you all are healthy and safe!
Posted by DeanM at 11:05 PM 40 comments:

Managed to power through and get these guys done. My left arm is hurting, but a few rum and cokes and ibuprofen should ease the pain.

The head swaps worked out nicely. I think the Vistula Legion, as well as other Polish troops, should be in the closed lapel jackets rather than the older style open lapel and long tailed type. 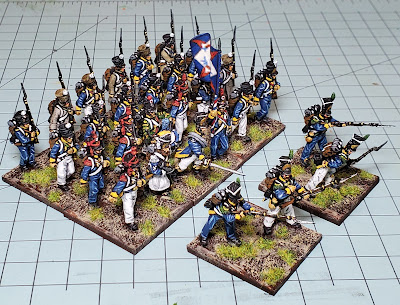 I found the flag on the internet, but not from an actual miniatures flag site so the detail is kind of grainy. Still good enough for the gaming table. 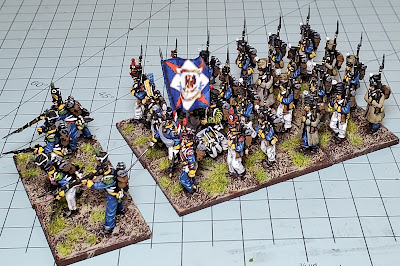 The flag pole is painted with red, white and blue spirals - as in the Uniforms of the Retreat from Moscow book I used as a reference. 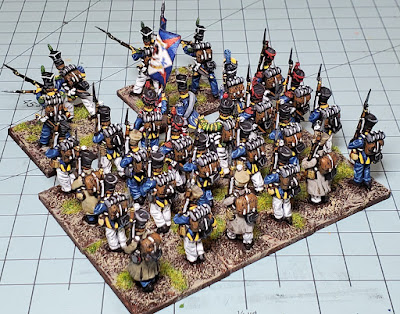 Well, I'm glad I finished them up as I'll likely have to take a break before working on the Warlord guys as Swiss 4th Regiment. So much for now. Wishing you all the very best during the universal Clamp Down.
Posted by DeanM at 5:45 PM 40 comments:

Managed to get most of the work on the Perry guys painted up as Vistula Legion. Just a few more things to paint, but I had to take a break due to my left shoulder blade and lower back giving me trouble. 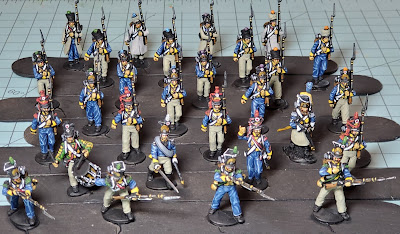 The Warlord Games Vistula heads seem to fit the Perry figures quite nicely. Anyway, hope to get them done in a couple of days - after resting my back and shoulder. In fact, painting increases the pain, particularly in my left arm and shoulder blade area. Well, enough of my sniveling. Wishing you all the very best during these trying times!
Posted by DeanM at 6:14 PM 38 comments: