An Actual Gaming Post At Long Last! Live From Enfilade! 2018

Posting this late Saturday night from Olympia, Washington - the second day of the flagship historical gaming convention here in the Pacific Northwest, Enfilade! I was happy to host four Lion Rampant games. Two First St Albans games on Friday (afternoon and evening periods); and two Tewkesbury games on Saturday (morning and afternoon period). Each game had six sign ups filled up before the convention started - I actually was honored to have a seventh player walk on for my last two games - Chris Ward from Cigar Box battle mats. I was even fortunate to get into the new TFL "What a Tanker" game on Saturday night. I liked the rules very much and may be picking up a copy. Without further adieu here are some pictures of just a few of the 124 listed games. 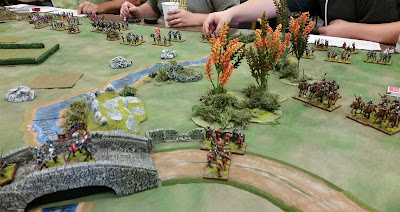 EDIT:
Here are some Sunday morning games - I left soon after and there was also an afternoon period. The con has grown from no Sunday period, to a few tables for open gaming, to a few registered games and now two periods. This is very impressive and the afternoon traffic starts to get pretty heavy on Memorial Day Sunday - and we have folks traveling back home to British Columbia, Oregon and Eastern Washington (basically Idaho ways).
For whatever reason, I find that I enjoy hosting games more than playing in them. Especially at Enfilade! Maybe, it's because I plan for it so far out and look forward in anticipation to hosting it. Of course, it's always great to see folks I only see once or twice a year and have developed what I would consider a friendship with. Thank you very much for stopping by and best regards to all!
Posted by DeanM at 10:57 PM 47 comments: