Being frugal, I opted to use the Foundry musician and standard bearer that came with the rest of the unit. However, I didn't want to use the officer as he's the same figure I have for another phalanx unit already. Luckily, Keith at Aventine had sent me a bunch of sample figures when I ordered some elephants from him. One of the guys for an elephant tower looked the part with his bearded face armor. The standard has an LBMS transfer. 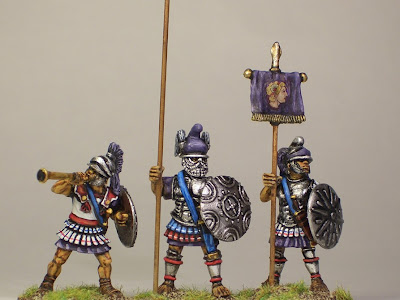 The only thing I had to do was add some Green Stuff to his lower legs, as well as the Foundry standard bearer's, to make it look like they have greaves on. 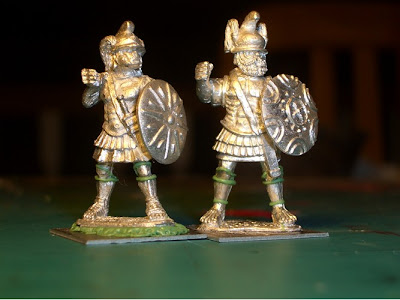 I just added stuff to make it appear they have top edging to their greaves, as well as the cloth straps that hold them on. I added a little bit to the rear to have it look like the openings of the greaves too. 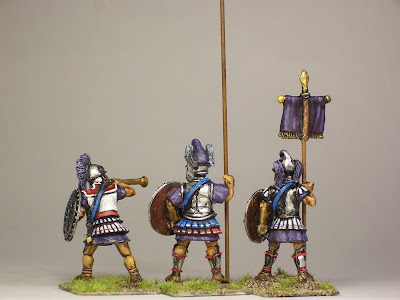 Here is the finished Argyraspides unit with their North Star spears - ready to take on any vampire or werewolf with their silvered armor highly polished with garlic. At least that's what I'm told from this reenactment (@ 1:53). 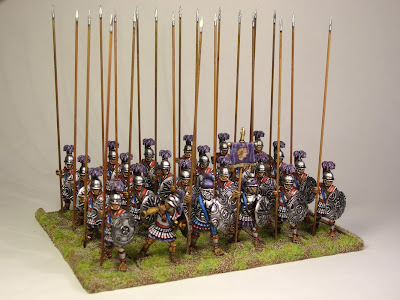 The Foundry Hypaspists are being worked on now - their original shields have been replaced by larger Aventine ones that came with the tower crew for the elephants.
Posted by DeanM at 10:12 AM 13 comments:

Need to add those lovely North Star spears and also a command. I'm using the command figures that came with these for a Hypaspist unit. I'll probably get a command packs from Gripping Beast's Polemarch range. 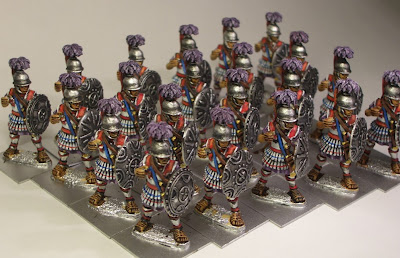 I was going to have them in a 28-man unit, but think I'll try them out as a 24-man unit to reflect their elite status.

This is actually the second Argyraspides unit I've painted. I had one composed of mainly Vendel figures, but sold them off as I was just too infatuated with these from Foundry. The Vendel were nice, but looked a bit stiff compared to the other Foundry units. This is a shot of them before I sold them off. As you might be able to tell, I used a similar color scheme. The Vendel shields were polished and given a wash before clear-coating. 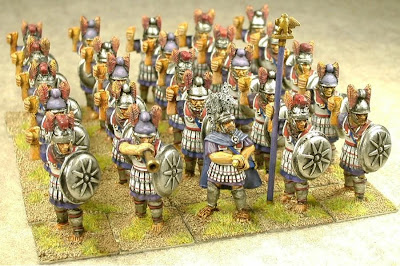 The officer is an A&A figure that I added a helmet crest and feathers using Green Stuff. The standard is a Roman one from a spare figure. The musician is actually a regular pikeman with a rotated right arm and scratch-built trumpet.

After I flock the bases of the Foundry guys, I'll start on the Hypaspists. I also ordered a set of 1st Corps Hetairoi; I plan to use them with some Gripping Beast guys for a Cataphract unit that will be part of a Seleucid Successor army. The Silver Shields will also be in this army.
Posted by DeanM at 5:40 PM 16 comments:

Tried a new (for me) technique on these Foundry Silver Shields. Hoping to save some time, I spray painted several figures with silver for a base coat. The idea is the shield, helmet and greaves are silver (or silvered), so these areas wouldn't need to be brush-painted. It seems to have worked out alright. Here's what the test figures look like. NOTE: I got the idea from James B's blog where he used the silver undercoat for some Romans - I'd forgotten where I'd seen it, but now realize it was on his blog. 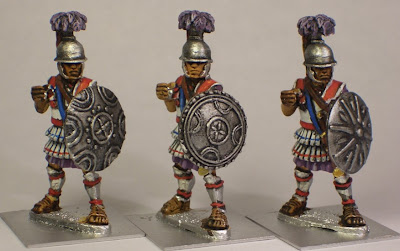 Only four basic colors are used, aside from silver; red, blue, white and purple. I actually mixed the same blue and red with white for the purple. So, I guess you could say I only used three colors. The silvered areas were given a wash to bring out the details. I did have to go over some of the silver areas with a dry brush to lighten up some areas. Otherwise I think this method will work. I painted these three fairly quickly. The rest should go quicker now that I the steps down. This unit will have uniform armor; although their shields will have three slightly different designs. Maybe the order for shields went out to different armorers and they interpreted the design differently. I also have some Foundry Hypaspists - these will have their linothorax in different colors, but same shield design - the Alexander the Great head transfer from LBMS.
Posted by DeanM at 1:28 PM 12 comments:

Well worth the wait; and the wait was really no fault to North Star. Nick shipped my order about a day or two after I placed it. It just so happened that it was made during the Christmas mail season, coupled with bad weather (more than normal winter conditions) and also stiffened USPS mail handling thanks to some not-so nice domestic mail incidents. Anyway, I managed to paint up some of the spears for the Early-HRE knights. 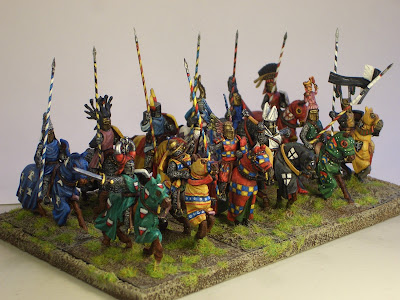 The spears are about 70mm long, after I cut them down from the 100mm length I ordered. I needed 100mm to arm the Foundry Silver Shields I hope to start on next. These spears, or more specifically the spear points, are very nice; No need to hammer and file the tips. All of the spears are painted with spirals matching the knights' arms. They probably look more like going to a tournament than war, but it will do. 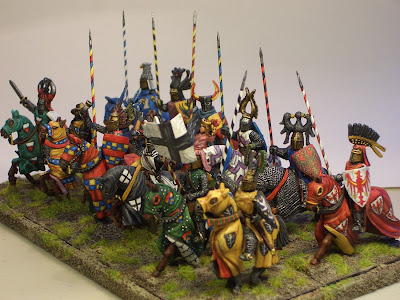 I also added a unit standard to the Szekler Light Cavalry unit too. I downloaded the design off of the Wiki page on Szeklers (aka Szekley). Yeah, I know - I'm quite the historical researcher! 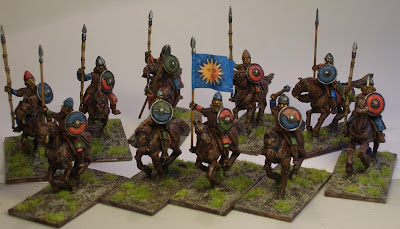 Carroccio of the Archbishop of Cologne

Or at least my interpretation of it from what some sources say was in the form of a wooden castle. 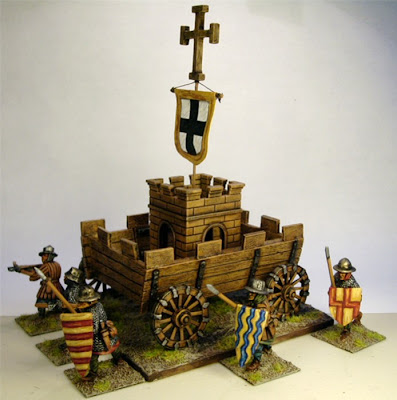 This is a converted model of an Old Glory Hussite war wagon. I widened the wagon and also added crenelations to the sides. The cross at the top of the flag pole is made from styrene plastic - scoured to make it appear to be wooden. The tower is from an Academy Roman Warship kit. 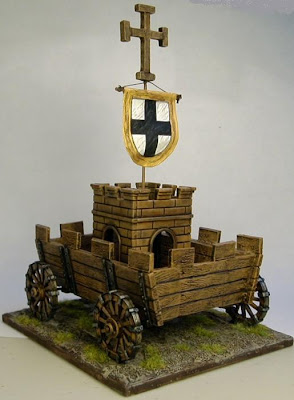 The tower and standard are removable. 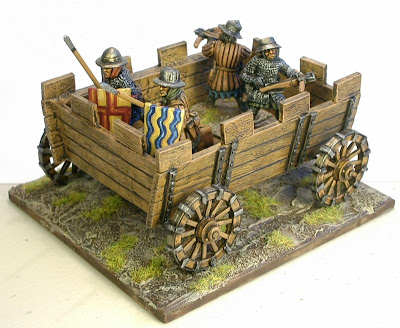 This will be the Army Standard Carroccio for an Early-HRE Clerical Army. I'm still waiting on some spears from North Star to add to the knights of this army. Otherwise, the army is basically finished. My next project will likely be a unit of Foundry Silvershields - also needing the North Star spears/pikes. Oh, I guess I will add a team of oxen to pull the wagon; at some later date. 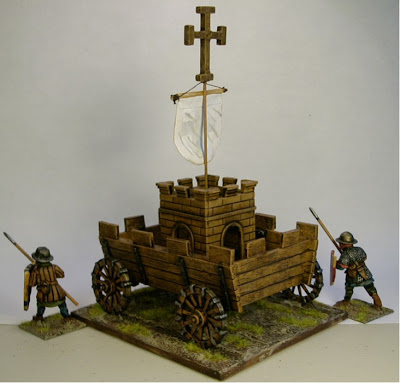 How to Convert an OG Hussitte War Wagon into a Carroccio

A few months ago I traded something (which I can't even remember now) with a fellow TMP member for an Old Glory Hussitte War Wagon. A few flailmen and crossbowmen were even included. I wanted to see if I could convert the wagon into the Army Standard carroccio for the Clerical HRE army. I did some quick research and realized that there aren't very many images of carroccios - at least on the internet. I did read an account of the Battle of Worringen which mentioned the Archibishop of Cologne's carroccio resembled a wooden castle. 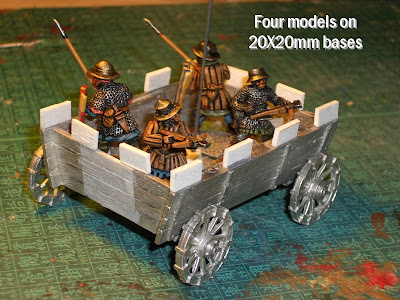 Here are the components of the Old Glory kit - or at least what I received in the trade. I believe it comes with two sets of wagons. I think the piece at the bottom of the photo is for a raised protective shield on one side of the wagon. It also appears one sidewall of the wagon has stuff (straw?) sandwiched between it. 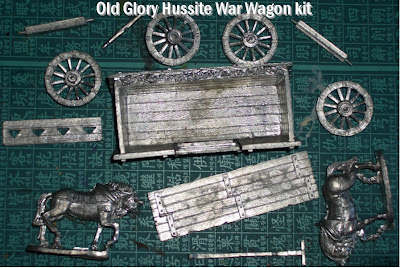 The Armies of Chivalry WAB supplement allows for up to ten defenders for the Army Standard carroccio. Of course, these all won't fit inside, but I did want to be able to fit at least a few in there. I ended up sawing the wagon in half, down the center. 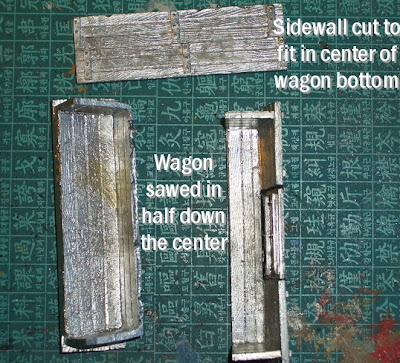 The piece for the raised sidewall was used to fill the widened gap for the base of the wagon. It just so happens that it made the bottom of the wagon about 40mm wide - just enough to allow to four figures on 20X20mm bases to fit (as in the first photo). The base for the Army Standard takes up the center - if not six figures could actually fit inside. Plasticard was used to fill the gaps in the walls. 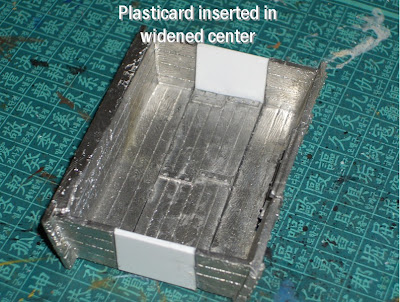 I used part of the original axle frame to support new wire axles. A piece of plasticard was also glue to the bottom center of the wagon to add support. 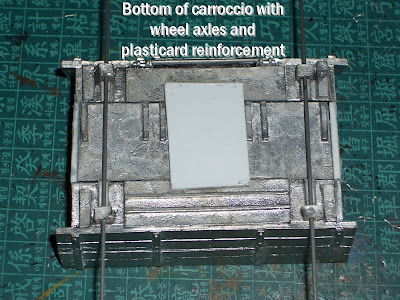 Although the account I read mentioned the Archbishop of Cologne's carroccio looking like a castle, there was no detailed information, nor images of it. I decided to add plasticard to form crenelations along the walls to make it appear like a castle. These pieces were scoured with an engraver to simulate wood grain. The plasticard walls were covered with modelling putty and then sanded and grooved to simulate the planking and wood grain. 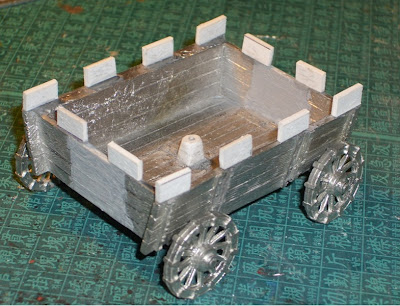 I then remembered I had an old Academy Roman Warship model kit that included a fighting tower. I added a piece of plasticard to the top of the tower and drilled a hole to allow the Army Standard to fit through it. 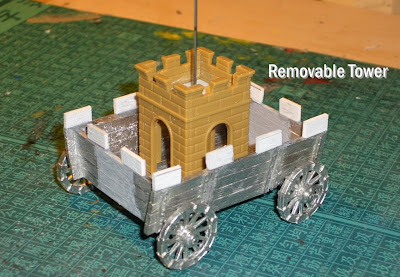 Now I need to get two pairs of oxen to pull the carroccio. I think I'll base the carroccio and oxen separately - the carroccio doesn't move once placed on the battlefield anyway. I'll post more photos after the model is painted - and with its standard.

So far, I've only been able to find these two period illustrations of carroccios. The first one depicts the Carroccio of Cremona at the Battle of Cortenuova in 1237. Both paintings probably date from the early 14th Cent. 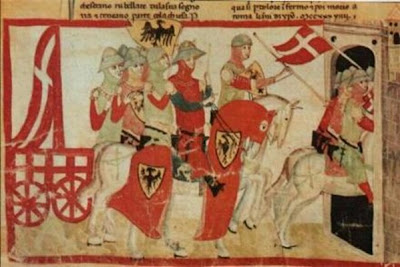 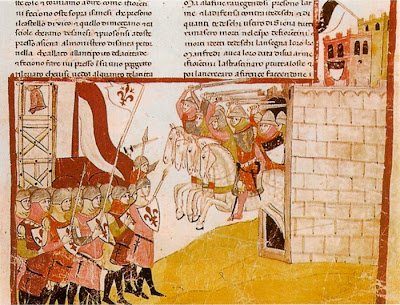 This is a modern day recreation of a carroccio in Italy. The oxen appear extremely large; like 28mm animals with 20mm human figures. 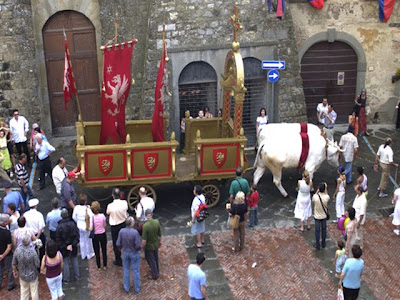 Happy New Year! From All of Us

All of us...Medieval infantry types, that is. Finished the first group of figures for 2011. These are the Curteys spearmen and Old Glory crossbowmen. Here they are ranked up in three units along with some earlier completed Old Glory spearmen and crossbowmen. They're formed up for close combat with the crossbowmen in the last rank of their mixed units. 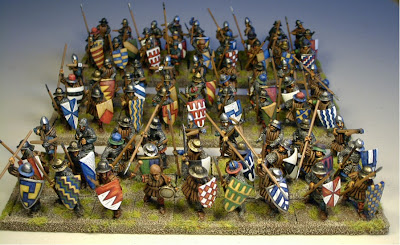 These are pictures of the figures just completed. Curteys spearmen up first. Since these guys have generic shield patterns, they can also be used in my HYW French army as Voulgiers.