Well, at least for this membership - ending in July. Here's what I received in the mail today (all 25/28mm):

OG 12th C. Infantry (from the Mongols in Europe range).

And I still have Victrix French, OG & 1st Corps Hoplites, Crusader Thracians, Great War Miniatures & OG WWI Germans, as well as various terrain projects still sitting in my cabinet! I should be very busy for the rest of the year - if not beyond.
Posted by DeanM at 7:26 PM 1 comment:

I decided to work on the box of Victrix French Infantry. I thought it might be therapeutic - the gluing together of the parts, and all. They seemed to go together faster than the British set I worked on a few months before. Or, maybe it's that I now know what to expect.

I opted for using the bearskins for the grenadiers & the longer plumed shakos for the voltigeurs. As most know, Victrix sets have enough spare/extra heads & arms for swap outs.

From the several posts of completed figures by other folks, I had thought there would be a lot of marching poses - that is, arms for marching poses. As it turned out I had to purposefully remember to add a few marching poses to ensure I had a bit of variety. There are enough parts to make most of them in firing and advancing poses - which is what I wanted & why I chose Victrix for my Napoleonics. If I wanted purely marching poses, I would've just ordered Old Glory figures - they look nice enough on the website.

A couple of the figures were modified a little using a hot knife to alter leg & arms poses - just a couple of the officers. I used my Dremel to sand down the bases a bit - for a lower appearance on the 20mm (approx.) round washers.

Anyway, I next will give them a quick clean-up wash & add some caulking to blend in the bases. After that, an undercoat of while; and then on to painting. Not sure when I'll actually get around to that - as my mom will be visiting with us for a few weeks soon. Until then, Vive le Empereur!
Posted by DeanM at 9:50 PM 4 comments: 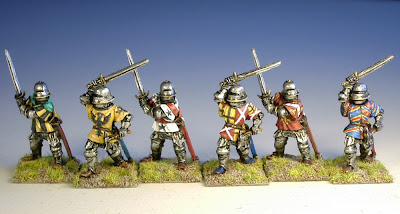 And just to show that I also attempted the arms on the backs of the tabards.

Please don't judge me too harshly - these are for wargaming.

I hope to use these guys in some Siege & Conquest scenarios. I now have to decide what my next project will be from the following list (in no particular order):

Additionally, I need to place a largish final order to OG before my membership expires next month.
Posted by DeanM at 10:28 AM 3 comments: