As with the earlier Panzer II and Panzer III, still need to at a tank commander from a Perry order. The camo is based upon an example I found on the internet. Used an old can of Tamiya OD for the basecoat, and then applied brush on Vallejo Dark Sand for the other major color. Outlined the sand color with with and the OD with black - as per the online example. 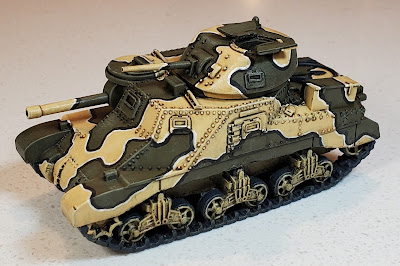 Very light weathering; just a light stain with a Future/Pledge floor wax mixture and some pin washing; followed by light dry-brushing - mostly on the sharp edges. 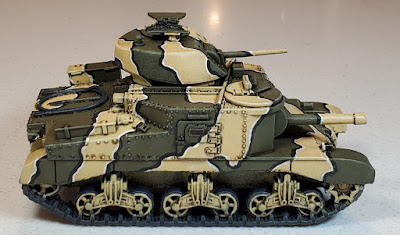 I want to add some unit marking later - if I get some appropriate decals. 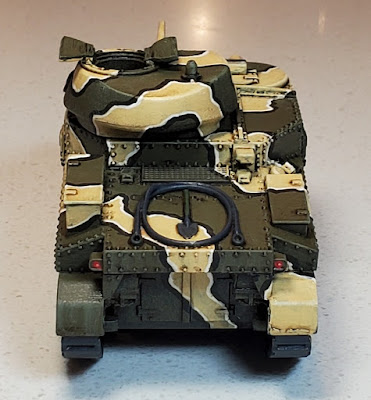 The turret is magnetized like the Panzer III, and can rotate 360 degrees. The tow cable looks more like a rubber hose; may have to streak it with some metallic/rust.

The Grant flanked by Tamiya 1:48th kits - a Matilda in front and Crusader to the rear. These will be the tanks for the 8th Army force. I may add an armored car too. 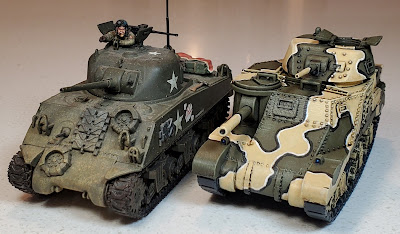 A comparison with a 1:50th diecast Corgi Sherman - the Grant is slightly taller overall, and also dominates the rivet count.
Next up is the Warlord Games Fallshirmjaeger squad in tropical uniform. Thanks for stopping by and wishing you all the best.
Posted by DeanM at 4:18 PM 25 comments:

Awaiting the arrival of some Perry metal tank commanders, but the resin Panzer II and Panzer III from Blitzkrieg Miniatures are done. I dry-brushed on Vallejo Iraqi Sand over a base coat of Vallejo Green Brown. According to the DAK paint set the Green Brown was used up to 1942, but looked too dark, so I went over it with Iraqi Sand - which the set indicates was used in 1943. A sepia-tone wash mixed with Future/Pledge floor wax was applied and then sprayed with matte.

These tanks are supposed to belong to the 15th Panzer Division which used single numerals to identify vehicles. The decal sheet I got from Warlord had the famous DAK palm trees, but didn't have the symbol for this division. Might add them later if I ever pick some up.

As mentioned in a previous post, these are scaled at 1:48th, since the rest of my vehicles are either this scale or 1:50th Corgi diecasts. Nothing against 1:56th scale, but I had started in 1:50th-1:48th so stayed with it. 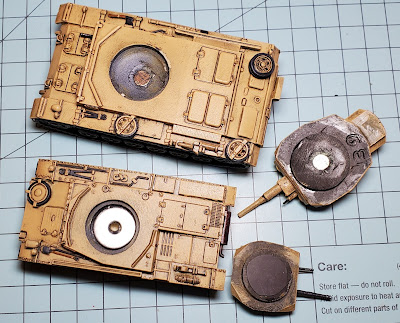 I used some spare magnets for the Panzer III turret, but used a washer and magnetic tape for the Panzer II. The large magnet would've been a bit too powerful to spin around the smaller II's turret.

A few comparison shots with the plastic/diecast OOP New Millennium Panzer IV I painted a while back.

I think the Panzer IV is around 1:48th scale too - appears to be close, in any case. 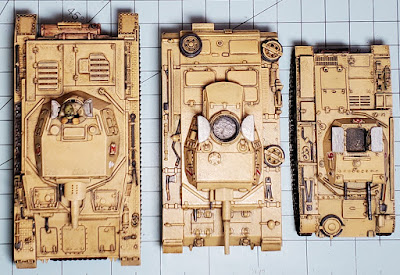 Next up is the Blitzkrieg M3 Grant in 8th Army service. Until next time, best wishes to you all!
Posted by DeanM at 1:03 PM 28 comments:

With the arrival of the very nice "lambda" shield decals from Veni Vidi Vici, managed to complete the Spartan project. Here are the 64 spearman along with the earlier completed command.

I ordered sets of black and red "lambda" decals. Jay at VVV was kind enough to locate some red ones which are currently shown out of stock on the website. Initially, I had planned to have the two units with the same colored shields, but decided to mix them up to give them a more varied look. 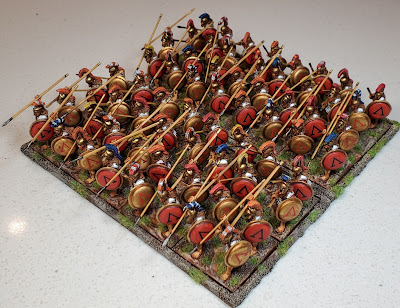 Ranking spearmen in thrusting poses takes a little bit of work, but pays off in the end. 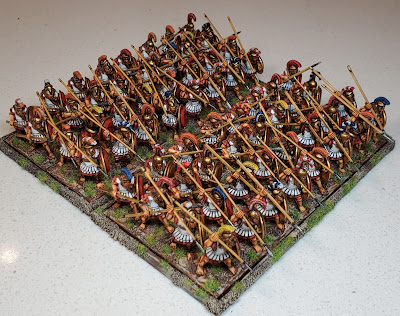 The white linothorax gives a simple, but striking look when coupled with the crimson red tunics, IMHO. Interestingly there are two figures from one of the overarm thrusting packs wearing the older style bell cuirass - maybe a lucky family heirloom. 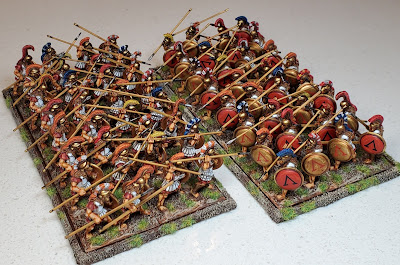 I took a lot of pictures from different angles - as I'm quite pleased with how they turned out. 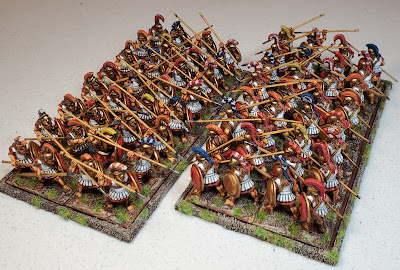 Pardon the indulgence - they may look like the same photos, but I promise I moved the units around (movement trays are the bomb!). 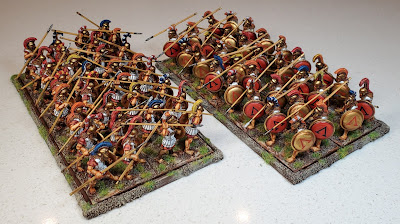 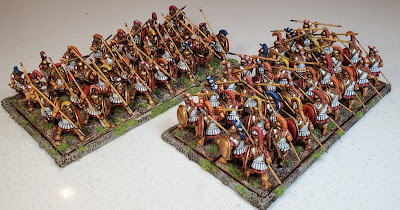 And finally, a shot of the rear rank guys in underarm poses - just showing a little love for them as they're hidden behind the overarm posed guys on the trays. 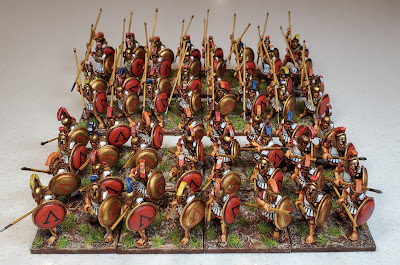 Okay, glad these guys are finally done - I can get back to some Bolt Action projects now. Thanks for stopping by and wishing you all the best in health and hobby pursuits!
Posted by DeanM at 9:11 AM 34 comments:

Just a quick post to show what I've been doing for the last week or so. Still waiting on the VVV lambda shield decals to finish the Artizan Spartans. In the meantime, built a few more movement trays - now have a total of 20 for 24-man units, and several others in different sizes - including two for the 32-man Spartan units. Also picked up a couple of 1/48th scale Blitzkrieg resin tanks and a box of Warlord Games Fallschirmjager in tropical uniform. The tanks are a Panzer II and an M3 Grant - both will be additions to the Western Desert Campaign. I picked all of these up from Sherwood Games on ebay. As you may already know, Sherwood Games is run by a Phil Vernon, who I had the fortune to meet at the WAB GT in 2013. 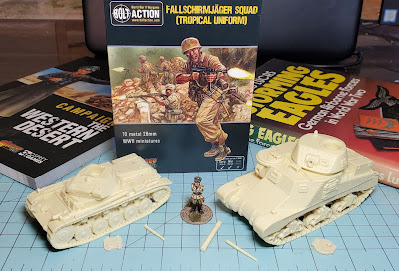 These are my first Blitzkrieg models, and I'm quite impressed with them. In fact, I went ahead and ordered a Panzer III to compliment the force.

And whilst malingering on ebay, I also picked up a couple of 120mm resin figures - couldn't pass them up as they were only about $12 each and with free shipping. I actually have the German knight figure already, but had modified him so wanted another to build up per the kit. 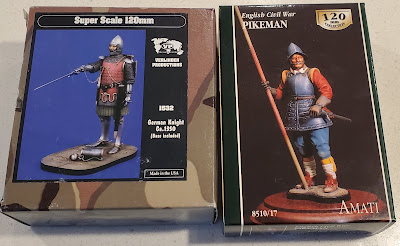 Update to the update - A couple of 1/48th Blitzkrieg resin tanks, a set of Warlord Games Fallshirmjager in tropical uniform, a couple of 120mm resin figures and finally, 64 Artizan Spartans awaiting shield transfers. 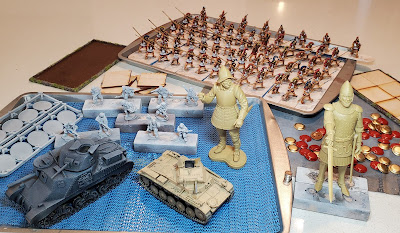 So much for now - just wanted to stay in touch with my blogging brethren. Until next time, stay healthy and keep enjoying the hobby!
Posted by DeanM at 1:31 PM 24 comments:

Painted these up while awaiting the arrival of the VVV lambda shield decals. These are from the Artizan Spartan Command pack - less one other figure. The "lambda" are hand-painted on the two shields; not hard to do, but didn't want to do this 64 times over. 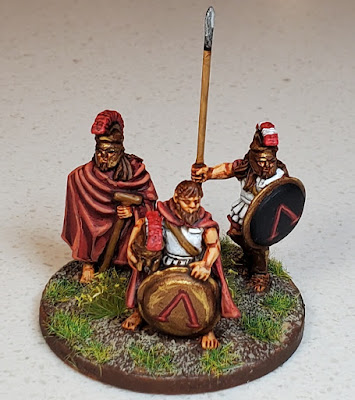 The guy holding the plastic broom bristle spear originally held a sword. It looked a bit over-sized and figured a spear would balance the stand better. 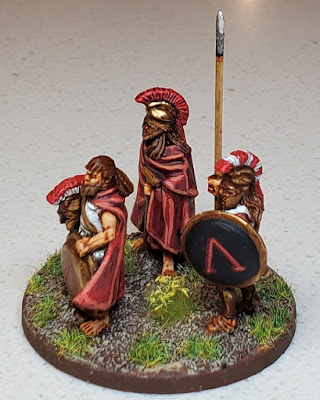 Too bad the guy holding the staff with his cloak wrapped around him didn't have a transverse crest on his Corinthian helmet - like that famous statuette. I think Artizan had two command packs - and the other one had a guy wearing a helmet with transverse crest; as well as including a piper. 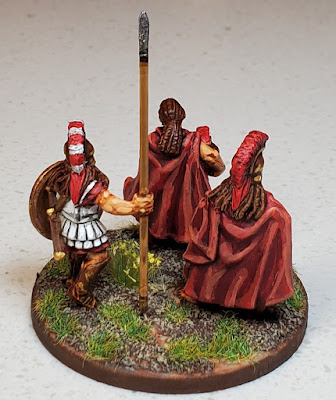 Anyway, these are a nice compliment to the spearmen; the braided Spartan locks are nicely sculpted. 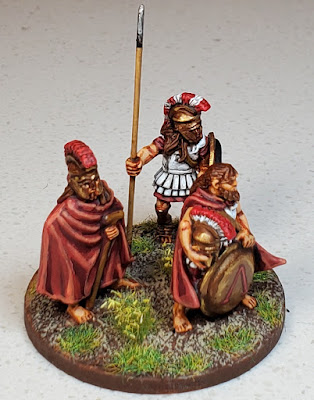 Just a little update and wishing you all a Happy Easter!
Posted by DeanM at 7:04 PM 50 comments: