Finished the shat and mounted the axe head today using some fancy brass upholstery tacks. Still needs an end cap or butt spike though. The Dark Walnut stain is a bit redder than I had expected, but should look okay with aging. 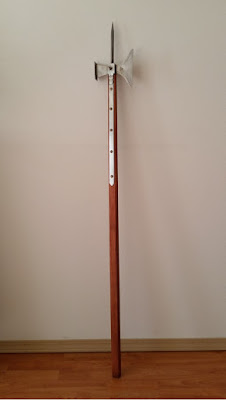 As mentioned in previous posts, the axe head is made by Get Dressed For Battle, and the shaft is a fence post from Lowe's.

The upholstery tacks aren't as strong as nails or rivets, but since this is only a display piece they're sufficient. 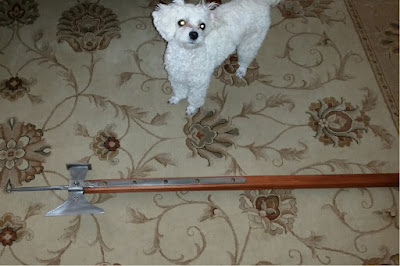 Thanks for stopping by, and hope you like the newest addition to the "Frugal Man's Armoury." 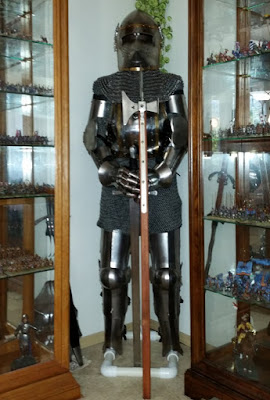 Using a piece of inexpensive ($2.25) fence post - 1.5" X 1.5" X 4', I started work on the shaft of the weapon. Here it is after taking an oscillating sander to preliminary work with a hand plane. Still rough, but not bad for about an hour's worth of effort
after work. 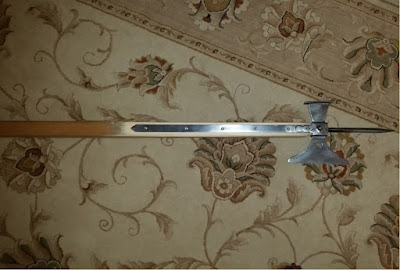 The sides of the lower half of the shaft will be beveled down a bit. I need to get something like roofing tacks to secure the axe head onto the shaft. 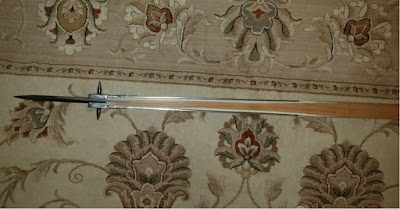 The image below shows the shaft after using a hand plane on the upper portion. 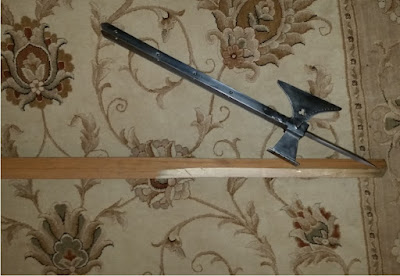 Even without adding a butt spike, the overall length looks good. The shaft looks proportionate to the axe head. 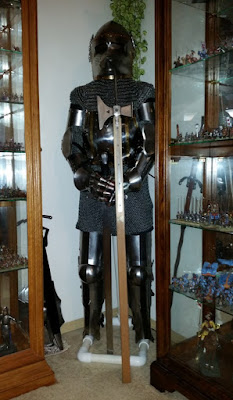 Thanks for visiting!
Posted by DeanM at 8:02 PM 16 comments:

WIP Shots of a Couple of Unreleated Projects

Just a blogger update to let folks know I am still among the living. Here are images of a Pole Axe  head that arrived today. Needs a wooden shaft to go with it - hopefully I can finds something at Lowe's or Home Depot. 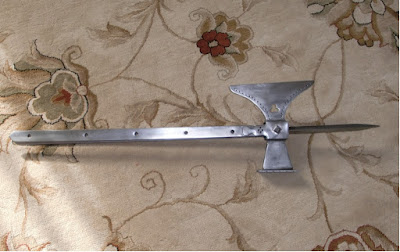 It's more of a display piece than an actual reenactment weapon. The axe head is nicely detailed, but the hammer side's grooved facing is rather thin. They should be pyramid shaped, although for $52.00 USD including free shipping, I can't complain. Here's a shot with a small dog for size comparison. 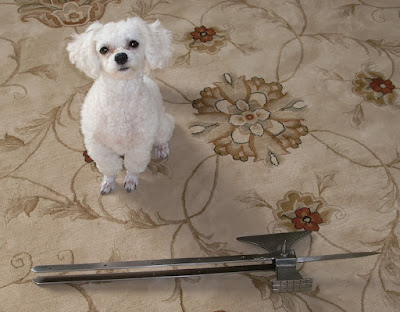 Also, I started work on an old Space Marine Whirlwind kit I had swapped for a box of Warlord Parliamentarians a few years ago. I added a 2 ounce fishing lead inside the front of the vehicle to balance the weight of the rocket and turret which are made of lead. 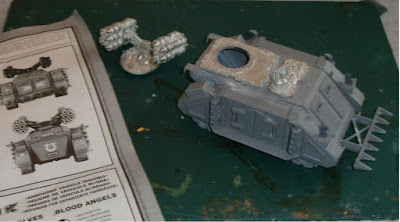 Since I haven't picked up a paint brush in a while, I wanted to post some images of large scale figures painted some years ago. These are Verlinden 200mm resin figures and also 1/8th scale Aurora plastic figures. They are a good match in size with each other. All of these figures are 15th C., except for the Black Knight who is from the 16th. C.
The Aurora models are multi-part kits and were originally issued back in the 1970's. The Verlinden figures' plate armor are finished with Gunze Sangyo metalizer. The metalizer was first painted on, allowed to dry, and then buffed with soft tissue and cotton swabs. The finish is quite metal-like once buffed and cured. The mounted "Gold Knight of Nice" was painted using Krylon Bright Silver - much simpler, but not as realistic. 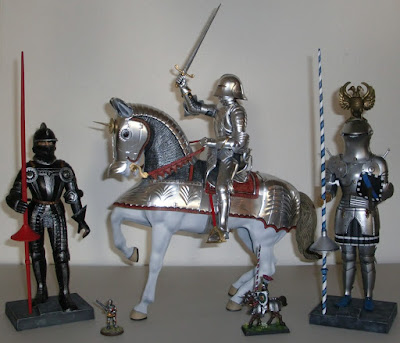 The Aurora models next to a 28mm BTD foot knight and mounted GW Empire knight for scale comparison. The Black Knight and mounted knight were posted before on this blog a year or so ago - apologies for the rehash. 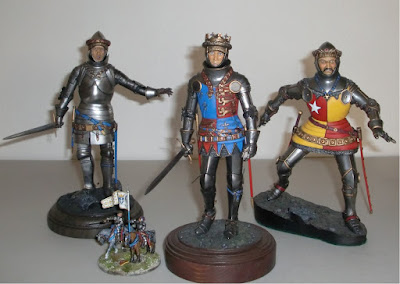 Lord Bardolph, Henry V, and the Earl of Oxford all fought at Agincourt. 28mm figures of Joan of Arc and her standard bearer for comparison. 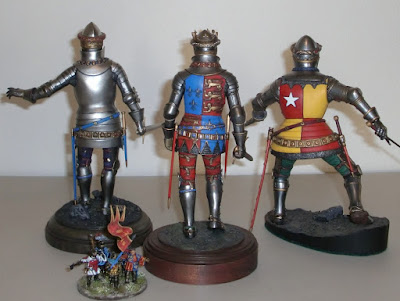 The back of the Band of Brothers, with a command stand of Perry French personalities for size/scale comparison. 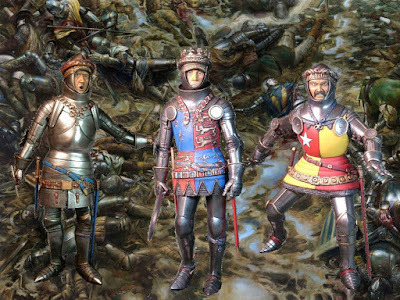 Again, apologies for not posting anything newly painted, but I think I may have something in mind to work on soon. Warmest Regards to you all, and thanks as always for stopping by.

Experimenting with a cheap sheet of green paper to "green screen" photos, here are some large scale Medieval figures. Most were painted many years ago prior to getting into wargaming. There's a bit of a green tinge to the photos - I may need to adjust the lighting so it doesn't reflect the green onto the figures.These are 120mm figures by Verlinden, Fort Duquesne, and a very hefty metal Berruto figure of John d'Abernon 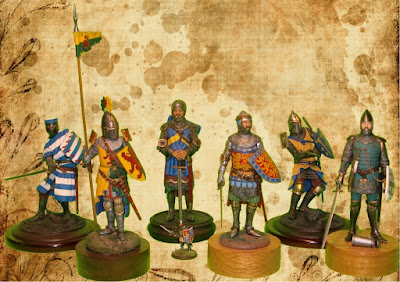 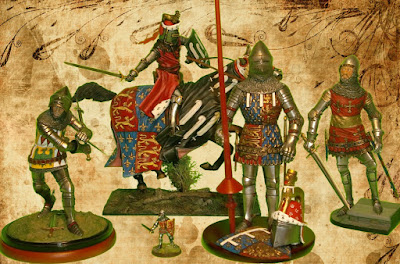 Here are some better pics of them individually - again from another website that I haven't updated for some years.
Just some eye-candy, which I hope meets your approval. Warmest regards to all.
Posted by DeanM at 5:20 PM 29 comments:

Getting back on track with miniatures - here are Trojan War characters from Redoubt. These were painted some years ago and were posted on another site in response to a TMPer bemoaning the fact that Redoubt's catalog at the time only had line drawings.

Incidentally, figures from this range were the first 28mm figures I ever collected. I was stationed in Hawaii and a little shop where I lived had models and miniatures - it's since moved to a new location with a new owner and called The Armchair Adventurer. The previous owner told me about Redoubt's Trojan War figures and gave me the contact info for a retailer - Doug at Miniature Service Center in California. I ordered a few guys with figure-8 and tower shields, as well as a chariot. At the time I intended them to be used in a diorama - didn't start wargaming until a few years after this. 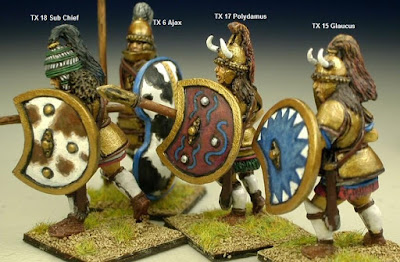 As a kid, I discovered the story of the Trojan War and Odysseus' adventures after the war in a book I read while in grade school. Unbeknownst to me at the time, the teacher had noticed that I always picked up the book and read it during our free time - while the other kids would be playing with toys and such. At the end of the school year, she surprised me by giving me the book - which I still have today - tattered and frayed. Here it is below on the left with a favorite translation on the right: 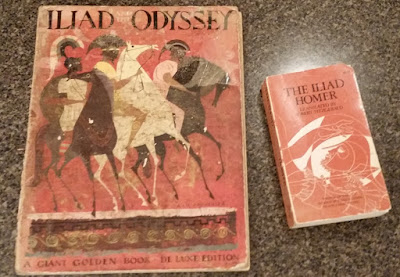 I read the translated version cover to cover many times and used the descriptions of arms and armor in painting these figures, but again, this was many years ago.
To be fair, the line drawings in the Redoubt catalog actually look very much like the actual figures. 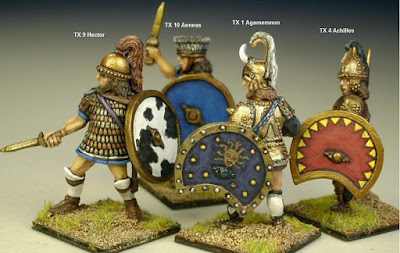 This range was created before the Foundry Trojan War range - which was sculpted to match these in size. A nice collaboration of different makers.

The Agamemnon and Achilles figures above were part of the first set of 28mm figures I painted. I used enamels on them, before switching to acrylics.

Below is a picture of the mini-diorama with the handful of figures I initially painted. The Lion Gate was scratch-built using Styrofoam with plaster over it. I still have it but changed the heads of the lions to face forward - it's sitting somewhere in a box needing some work.
﻿ 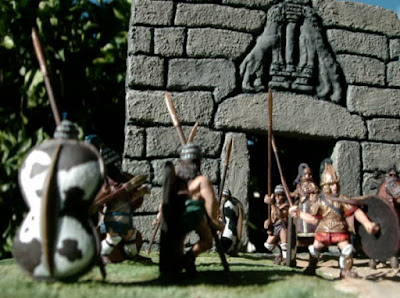 Once again, pardon my indulgence.
Posted by DeanM at 6:39 AM 36 comments: 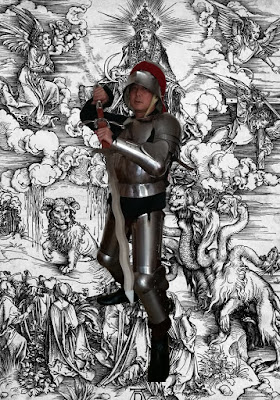 As you may see, I forgot to take off the protective plastic tip. 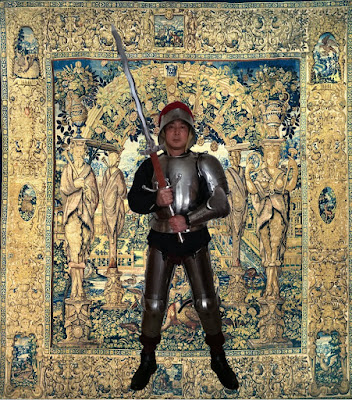 The sallet is pushed back as was fashionable at the time. Only the left arm is armored, and the greaves have been removed from the leg harness. 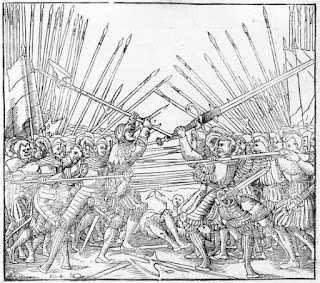 Landsknechte trained in the use of these two-handed swords served in the front ranks to break pike formations, supposedly by cutting off the ends of the pikes. They received double pay for this work, thus earning the moniker of Doppelsöldner. 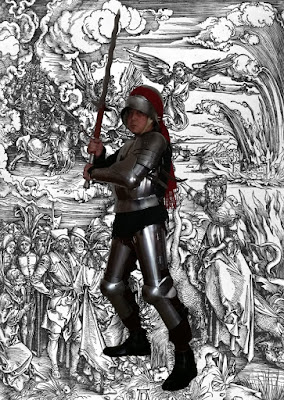 I did some dusting of the cabinets with my large scale figures, so figured I'd take a group photo of the 120mm Napoleonics I painted a long time ago - before I got into 28mm gaming figures. These are all Verlinden resin kits except for the guy with the colors painted up as the 4th Swiss made by a company called Dream Catcher (probably out of business by now). Note the four 28mm Victrix guys in the center. 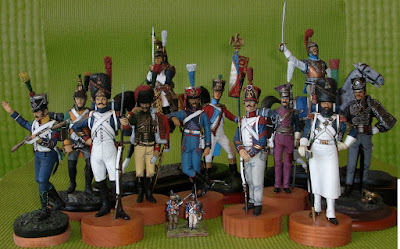 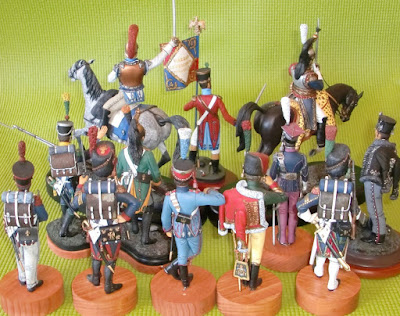 Just felt like sharing some eye-candy as I've not painted anything recently.
Posted by DeanM at 1:06 PM 24 comments:

Here's my attempt at a Mid-15th C. kit to replicate Italian-made armor for export - possibly to England for Men at Arms participating in the War of the Roses. Well, that's the fluff anyway. The arm and leg harnesses are the same as used in the Late-14th/Early-15th C. kit. The Sallet and Bevor are 14 gauge steel and mighty weighty. So much so that when my wife helped me put on the helmet, she said never to wear it again as it could injure my neck or spine. The recently acquired mitten gauntlets, breastplate and spaulders have been added.
As always, a sincere thank you for visiting.

ADDENDUM - In response to Sander's very good question on where I store the stuff - here's an image I just took (sun actually came out today!) of my hobby corner. Please note the new gear on top of the larger cabinet. The bevor is behind the mitten gauntlets. Only the spaulders are missing - I plan on working on them to make them a bit more curved. 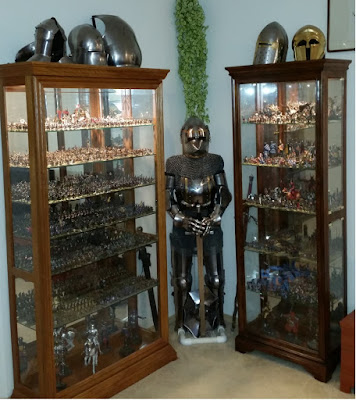 My wife tolerates my armor collecting as long it stays in this corner - looks like there's still room for a pole axe!
Posted by DeanM at 10:51 PM 28 comments: