Just a quick post of my new project; picked up a box each of Perry (not the new one) and Warlord Games French infantry. Actually, the Warlord set is their Vistula Legion set and I swapped their heads with the Perry figures. As the Warlord set comes with regular French heads (shakos and bearskins), I am using them as the 4th Swiss. 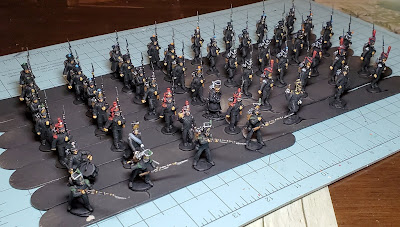 I used the czapka heads for Voltigeurs - although they may have worn regular shakos in actuality. I didn't want them lost in the rank and file on the Grenadiers. The Warlord set also comes with a few shakos with the Vistula sunburst crest. I must say, I quite like the Warlord set - the ammo pouches have grenades and hunting horns, and "N's" sculpted onto them for Grenadiers, Voltigeurs and Fusiliers, respectively. They size quite well with Perry; and Victrix for that matter. 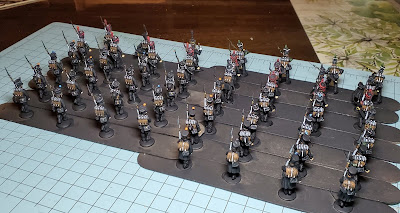 So much for now. Stay safe and healthy everyone. Until the next post, happy painting and solo-gaming - or games that don't require players to be closer than 6 feet from each other.
Posted by DeanM at 9:32 PM 27 comments: 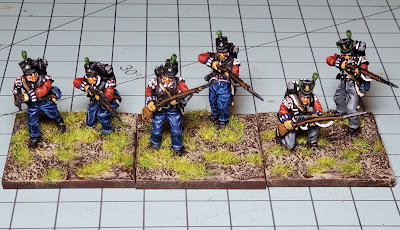 The Bremen guys in blue trouser and black leather equipment have metal Light Infantry heads. The heads seem a bit smaller in proportion to the bodies. If I were to build more Lights with stovepipe shakos, I'll probably use the plastic ones and modify them by scalpeling off the brass plates and painting on the hunting horn emblem. 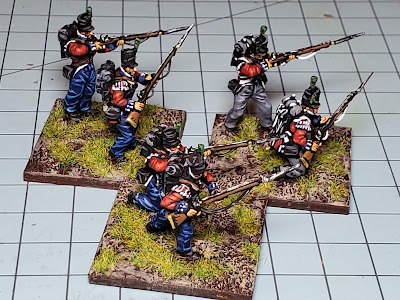 I have to say, British elite wings are harder to paint than French epaulettes - the latter only needed drybrushing. 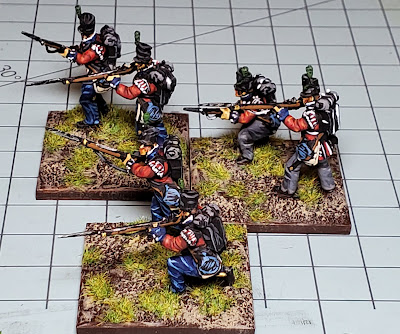 British cuffs with their lacing and buttons are about equally hard to paint as French cuffs - particularly the squared ones with piping around the cuff flaps. 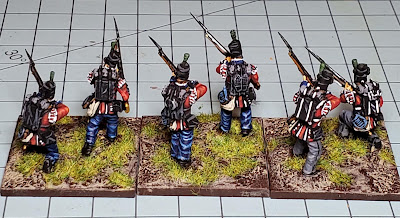 Black straps on black backpacks also present a bit of a challenge. I found it easiest to just give the areas a light drybrush of highlighting.

Well, so much for now. I actually painted these today while "teleworking" from home - 10 hour shift. I have to go in to the office tomorrow though. We normally have about 70 folks in building, but it appears besides me, only about five other folks are supposed to be in. This all due to the clear and present danger we're all living through. In fact, our State Governor issued the "Code Red" yesterday; ordering folks to "stay home" except those who have certain jobs requiring them to go to work. I don't think I need to, but our agency Director said the program I work in, payees for disabled veterans, needed to go in every other day. I mean I can do my job from home and we closed the office to the public. Wishing you all good health and happy hobby endeavors.
Posted by DeanM at 7:10 PM 38 comments:

Just a quick update with the French Horse Artillery based with guns completed. 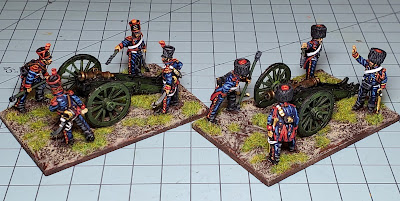 I'll have to read up on the rules for the howitzer - never used them in Black Powder before. 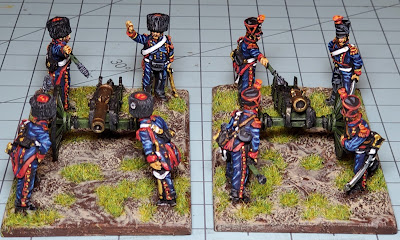 For the La Haye Sainte scenario, I plan to have them come on board after turn 3. In the actual battle, they didn't fire into the farm house. A battery was brought up after the farm was taken, but the 95th Rifles in the sandpit took out the crew. 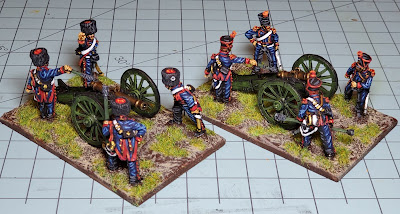 Well, these was the last of my most-recent Perry order. I may have to peruse their catalog for more stuff as it looks like I'll be staying close to home a lot until the current pestilence is over. 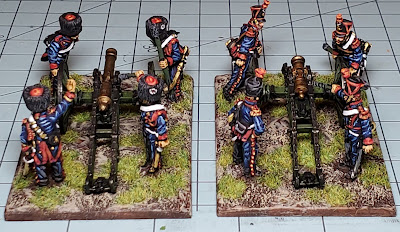 Thank you all very much for your continued interest in the blog posts, and wishing you all healthy and happy gaming and painting.
Posted by DeanM at 9:03 PM 37 comments:

A pair of French Horse artillery crew - one each Guard and Line. Vallejo Prussian Blue was used for the basic uniform color, and highlighted with a mixture of the same color and white.

They were painted with the usual black undercoat process, but without the use of Minwax staining. Only their faces and hands were given a wash of a combination Vallejo ink/stain and Future/Pledge floor wax. EDIT: I see that I haven't painted cannon in a while and forgot that I usually paint the barrels separately from the carriage. I may try to pry the barrels off before painting them. 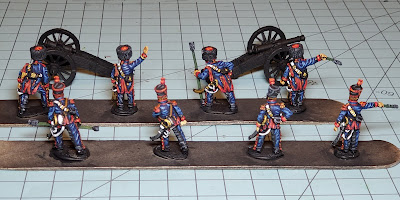 Thanks for stopping by and healthy gaming and painting to you all!
Posted by DeanM at 8:36 PM 28 comments:

Just a few additions for the La Haye Sainte scenario. These guys came to the assistance of the KGL troops in the farm house. 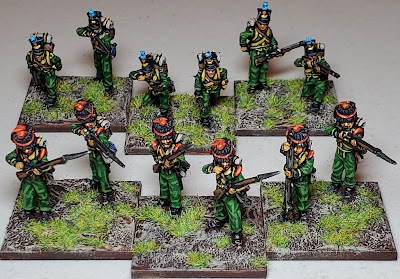 If you overlook their minor uniform changes, like the grenadier wings instead of epaulettes, they could be used for Peninsular as French troops. 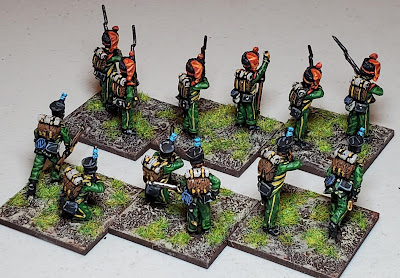 They're based in pairs as they'll be used as skirmishers. 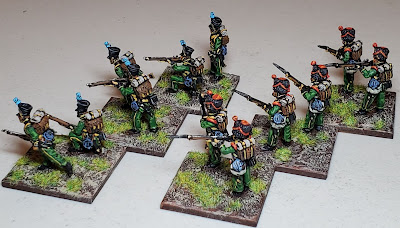 For the Peninsular, you could say they're using captured British canteens. 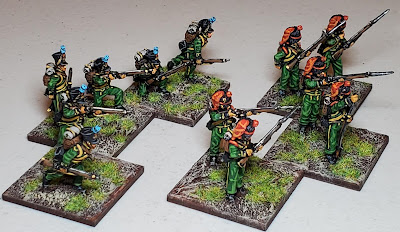 Lovely uniform and the grenadiers' colpacks are just too cool. Thank you very much for your interest and stopping by. Good gaming and painting to you all! Stay healthy and virus-free!
Posted by DeanM at 9:53 PM 42 comments:

Here is a 24-man unit representing the Field Battalion Verden who were present at Waterloo.

Very nice figures; both the plastic rank and file and the metal command. They would blend in well with either Perry or Victrix, IMO. 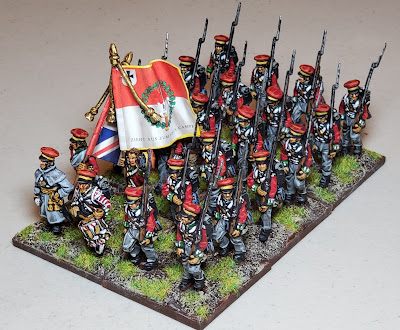 Word of caution on the flags; when I was working them into a wavy shape the coloring started to crack and flake off. I thought I had sprayed the flags with Dullcote prior to, but may not have (or maybe I did and that's what did the flaking?). In any case, I managed to salvage them by painting the flaked off areas. 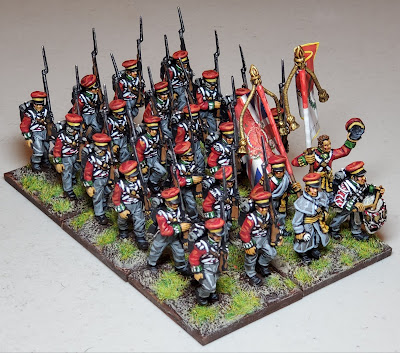 There are five marching poses of rank and file; so with varied head positioning, you can get some unique poses. Also, there is a head with a bandage over the right eye. 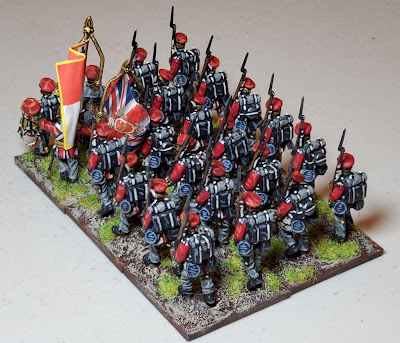 For backpacks, there are three variations - one with a small tin can on top, one with a mess pan strapped to the pack itself, and a plain pack. 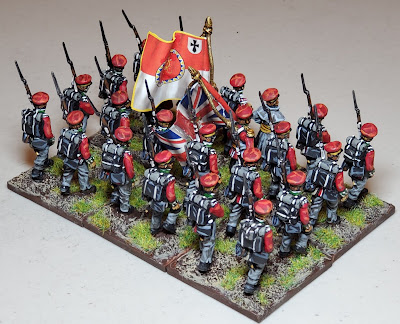 Plan to work on some Perry metal Nassauers next. Thanks for dropping by and best wishes to you all in your hobby endeavors!
Posted by DeanM at 7:44 PM 36 comments: