These are the rest of the Firelock figures I had needing to be painted - along with two converted pike men left over from the Battalia box.

They'll be "brigaded" along with Rupert's cavalry. I understand commanded shotte units were often attached to cavalry on the wings. The standard came with the command set and I'm not sure what unit it is for, but it has a Steampunk or Warhammer Fantasy Empire look to it. 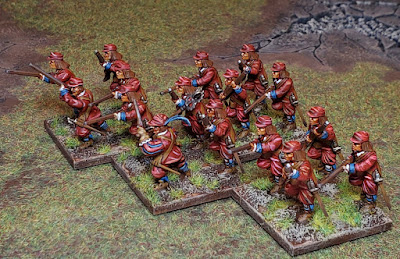 Gave them the same headgear to speed up the painting and give them a more uniform appearance as well. 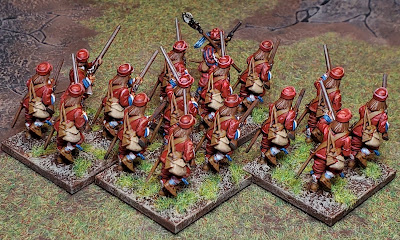 Speaking of speed, I experimented with using a red spray paint I already had (I might've gotten it a while ago intending to use them for Napoleonic British). 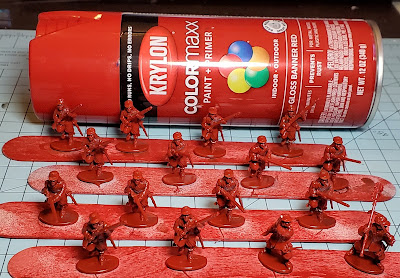 After block painting the flesh, leather parts, and muskets, they were given a wash of Minwax stain. This was followed by a matte spray and finally highlights. I used two reds; Vallejo Flat Red and Vermillion, both mixed with either white or yellow to vary the shade of the clothing. The red undercoating really worked well and sped up the process nicely.

Thank you for stopping in and checking out the blog - until next time, best to you all!
Posted by DeanM at 4:11 PM 36 comments:

Here's yet another set I was lucky enough to pick up at the Panzer Depot's closing sale last month. Warlord Games makes three sets of foot commands for Pike & Shotte. This one is listed on their site as #3. May have to pick up their other ones someday. 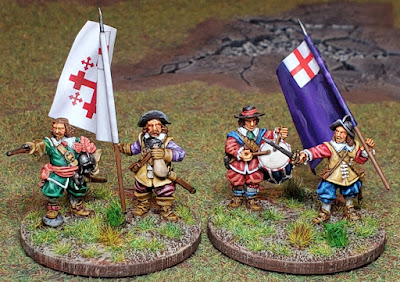 The purple flag is Fairfax's and the white one with red crosses is Bard's regiment (Royalist). 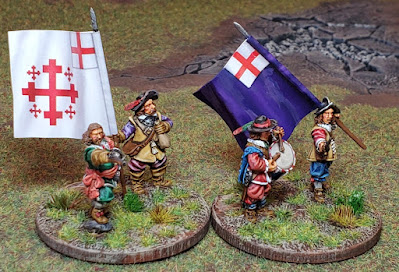 I originally had Fairfax's third company (with three stars), but when I folded the flag a lot of the coloring cracked off. I think it's because I sprayed Dullcote over the flag sheet before this. So, I ended up using the regiment flag instead - which still got cracks from folding, but not as much and I was able to paint over them. I chose Bard's flag because I liked the look of the crosses more than that regiment's participation at any particular battle. 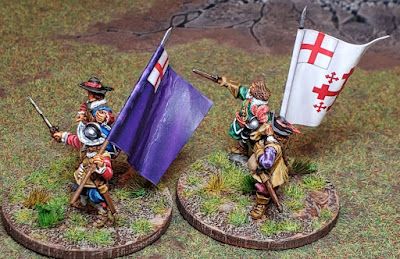 The figures themselves are great figures - as all of the ones from this range have been so far. 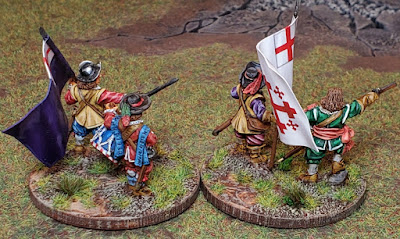 Still have the sniper and Rupert figures to paint up - as well as another unit of Firelocks, while awaiting the arrival of a couple of boxes of foot from Warlord Games. Thanks for stopping by and wishing you all the best!
Posted by DeanM at 2:12 PM 42 comments:

This is another pack I picked up at the Panzer Depot sale last month. I pretty much grabbed any and all Pike & Shotte stuff remaining - which were few and far between. When I got home and opened the blister, I found out the wooden frame was missing. It likely fell out of the blister sometime during it's 10 year stay at the store. I used plasticard to fabricate a replacement based upon the one for Roaring Meg. 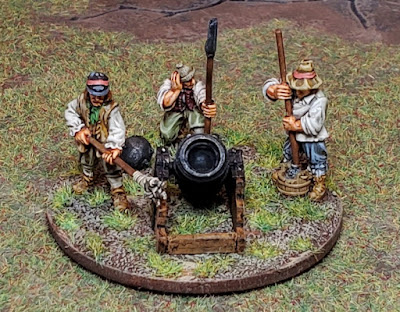 There's also an officer figure holding a spy glass that comes with this set too, but I plan on using him on a separate command stand. 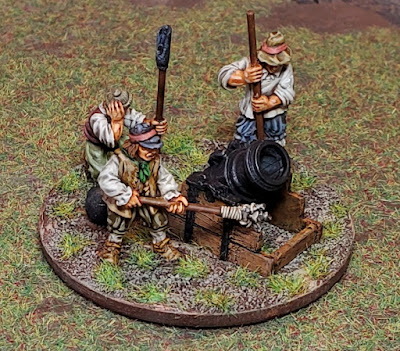 Besides the scratch-built frame, the rest of the kit are all metal. The mortar itself quite a stout little piece. 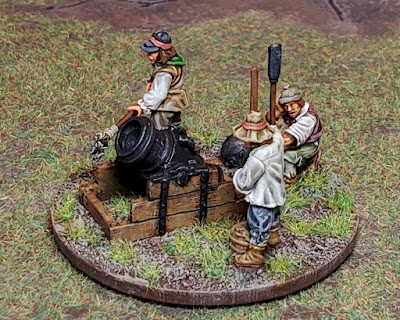 Luckily the top straps holding the mortar onto the frame were still in the blister attached to the spare cannon ball on a "sprue." 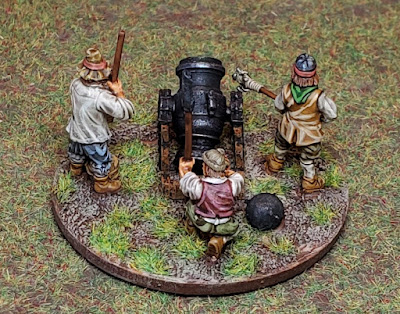 Below is the plasticard frame with some cardstock glued onto the sides to represent bars holding the planks together. Drops of Super Glue were added to the bars to replicate rivets - hard to see them though. I also used a scribing tool to draw the wood grain. 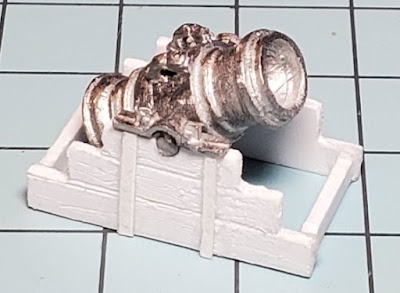 A picture of Roaring Meg which I based the frame upon. I've seen more recent images online showing a different shaped frame being used now. The grab rings could possibly be made using copper wire or something similar, but didn't want to  get too fiddly. 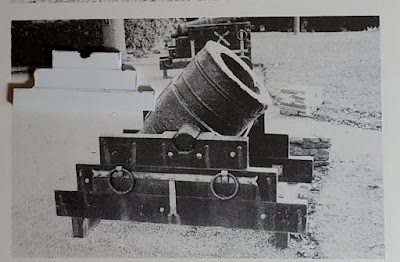 Anyway, slowly working my way through the stuff I bought from the Panzer Depot. Wishing you all the best and thank you very much for checking out the blog.
Posted by DeanM at 3:42 PM 32 comments:

Another one of the items picked up at the Panzer Depot's liquidation sale earlier this month. I grabbed what little remained of the Pike & Shotte stuff there, not really caring what they were. 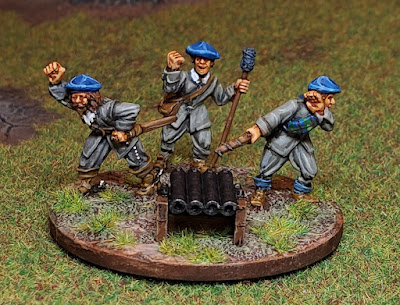 At the time, I knew practically nothing of the ECW, but after reading up on it a bit, I'm glad to have these Scots, as I hope to someday game a small part of the Battle of Marston Moor where they were present. In fact, I just ordered a box of Scots Covenanters from Warlord Games; along with an Infantry Regiment box. 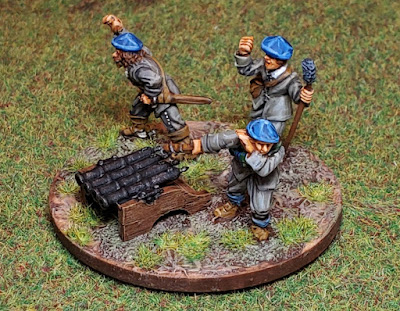 I like how the Scots can be depicted wearing mostly gray clothing with blue bonnets. This should speed up the painting process, as I shouldn't have to worry about varying clothing colors. 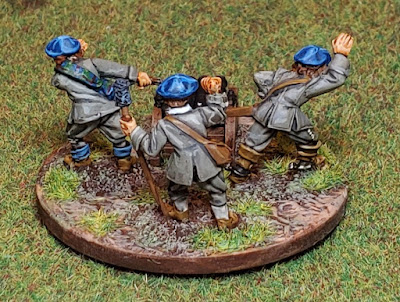 Fun figures to paint up once again. Guess I'm a bit smitten with ECW at the moment. 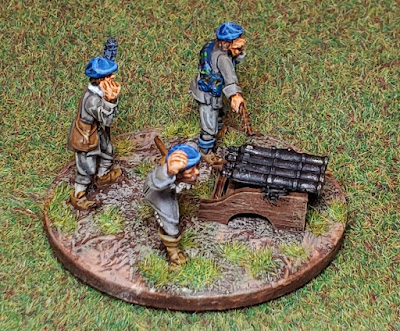 Another piece of artillery I picked up at the sale is a mortar - however, after opening the blister I found out it was missing the frame for the mortar. Shouldn't be too hard to fabricate from some plasticard though. Well, thanks for stopping by and hope you like this latest project. Best to you all!
Posted by DeanM at 8:37 PM 28 comments:

These are from the last TAG Pike & Shotte pack from the Panzer Depot liquidation sale a few weeks ago.

Very nice sculpts, and the horses themselves are very nicely proportioned.

They're mounted on Litko 50mm rounds. I suppose they could be used for markers or possibly messengers. Or, I may have to order a box of Warlord Games Dragoons which they can join up with.

I've come to really enjoy painting up figures from this period. The clothing, in particular, with minimal details (no piping, lacing, etc.) and basic colors (mainly reds, blues and grays) - make for quick painting. The large folds in the clothing takes Minwax staining followed by highlighting very nicely too.

Thanks again for stopping by and wishing you all good health and hobby pursuits!
Posted by DeanM at 4:20 PM 30 comments:

Ordered these several weeks ago, but wanted to work on the ECW figures first. The EIR army finally has some proper missile troops. 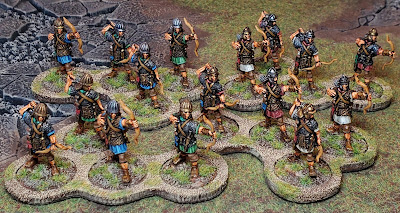 Two small units each of Eastern and Western types. Actually, it seems only the helmets are different from each other. They're mounted on 25mm Litko rounds and in Litko skirmish trays. 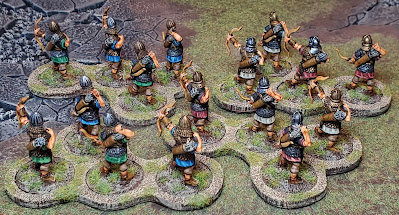 These are very nicely sculpted figures and a good size match for Victrix EIR plastics. A bit on the taller/larger side of 28mm.

I'll probably add some artillery to the army someday, but have some more ECW stuff in the queue. Thank you so much again for stopping by and checking out the blog. Best wishes to you all in your hobby pursuits and good health as well.
Posted by DeanM at 3:43 PM 30 comments:

Here they are painted up as a unit each of Parliamentarians in orange sashes and Royalists in red sashes.

The horses are very nicely sculpted in halves which can be mixed and matched for variety. I used two can of brown spray paint to speed up the process. Tails, manes and horse furniture were then painted and finally given a Minwax stain. It's the only way I paint up quantities of cavalry.

As with the foot figures, helmets or hats are added to the riders' heads. One thing with these are the nasals and face guards on the helmets. Once glued on the heads, about the only thing I could do was use a thin brush to dab flesh color on portions of the face between the face guards.

Otherwise, very nice figures and enjoyable to paint up.

I may add flags to the poles, but the sashes should identify which side the units are with.

I really like this range from Warlord Games - nice figures that aren't too hard to paint. I may add a few more foot and cavalry later; Scots Covenanters in gray coats and blue bonnets sounds appealing - and Cuirassiers as well. However, if I do, I'll need to get another can of Minwax as the one I bought last year is just about out. Thank you all very much for stopping by and wishing you all the best!
Posted by DeanM at 9:41 PM 36 comments:

Here are the figures from two boxes of Warlord Games' Firelock Storming Party. The leader with pole arm and drummer are both metal figures; the rest are the usual plastics. 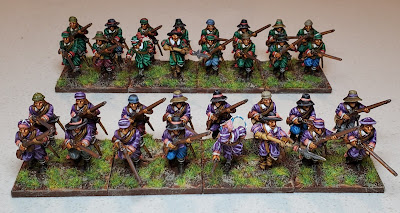 They're in purple and green coats, but not representing any particular unit. They were painted up in the usual way using Minwax stain over block painting with some highlighting added. 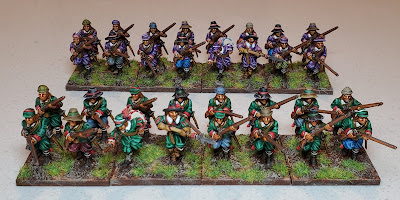 I have 10 more of these figures left (less command), which I'll likely base as singles. Very nice sculpts are quite enjoyable to paint up. 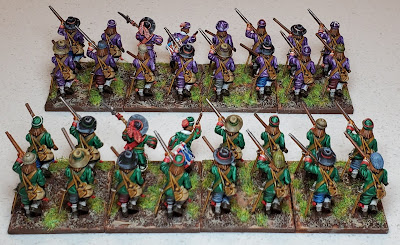 Still have the cavalry from the Battalia box to do too. Anyway, thanks again for stopping by and checking out the blog. Best wishes for the hobby and your health!
Posted by DeanM at 4:28 PM 25 comments:

These are the foot figures, less the firelocks, from the Warlord Games Pike & Shotte Battalia box. Painted up in two separate Battalia of Foot - one in red coats for a generic Parliamentarian army and the other as Prince Rupert's Blue Coats.

Basing the guys with leveled pikes took a little bit of consideration, but not too bad. 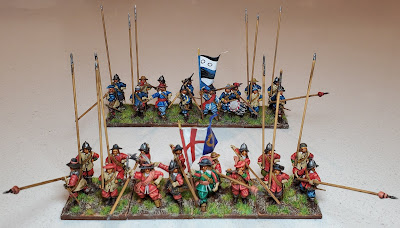 This has been quite an enjoyable foray into a new period for me. I hadn't considered ECW in the past, but I do have a newfound interest in it. Thanks for dropping by and wishing you all the very best in the hobby and health as well.
Posted by DeanM at 12:14 PM 28 comments: