Apologies, and a Padded Gambeson

First off, sincerest apologies to my fellow bloggers as I've not visited as many of your sites as I had wished. Somewhat busier than normal at work, and also returning to an earlier passion - Late Medieval armor. Seems the timing for this is fortuitous as there is so much relatively inexpensive reproduction stuff being made in India and elsewhere. I ended up getting a padded gambeson that is very similar to the one once owned by Charles VI of France, and still in existence. Here it is below with the other stuff recently acquired - the belt is actually on loan from my wife.
The gambeson is made in India, and was actually shipped from there and arrived in a only a couple of weeks.
I should get some better foot protection, but I just got home from work and opened the box and couldn't wait to try it on. I know I'm getting on my wife's nerves asking her to take pictures of me too.
Hope to get back to painting soon - but this 1:1 stuff is a bit fun. ;) Cheers!
Posted by DeanM at 5:50 PM 36 comments:

Another Black Tree Design 2d Crusades figure from their command pack. He is depicted as Robert Guiscard, his shield bearing the arms of De Hautville. He was one of twelve sons sired by the Norman lord, Tancred de Hautville during the 11th Century. Most of these sons left Normandy to seek wealth and glory in Italy. Robert was the most successful of these. 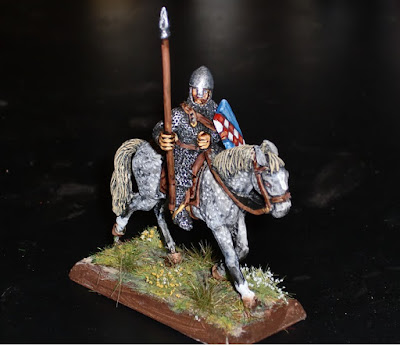 "This Robert was Norman by birth, of obscure origins, with an overbearing character and a thoroughly villainous mind; he was a brave fighter, very cunning in his assaults on the wealth and power of great men; in achieving his aims absolutely inexorable, diverting criticism by incontrovertible argument. He was a man of immense stature, surpassing even the biggest men; he had a ruddy complexion, fair hair, broad shoulders, eyes that all but shot out sparks of fire. In a well-built man one looks for breadth here and slimness there; in him all was admirably well-proportioned and elegant... Homer remarked of Achilles that when he shouted his hearers had the impression of a multitude in uproar, but Robert’s bellow, so they say, put tens of thousands to flight." 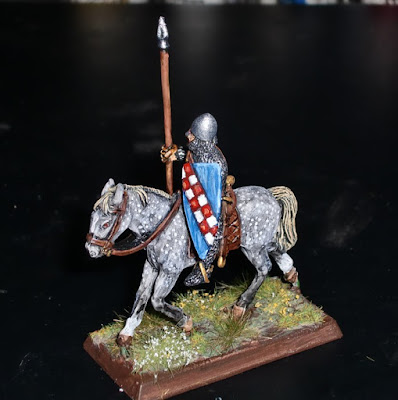 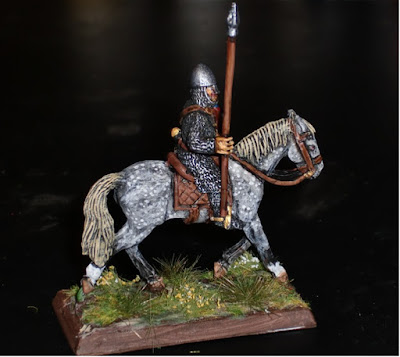 Robert died of fever while on campaign in 1085. His eldest son Bohemond I of Antioch would be a leader of the First Crusade. Robert had several other sons, of whom Roger Borsa was named his heir. Roger ruled Southern Italy until his death in 1111. 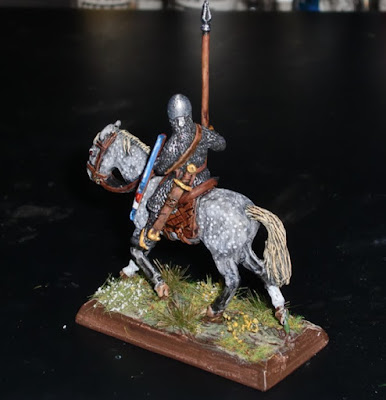 How to paint a Dappled Horse - hopefully the following can be of some use - please feel free to contact me (via comments here or otherwise), for any questions:

2) Add washes of thinned down black. In this case I used craft store black mixed with PVA (Elmer's Glue). The PVA slows the drying and allows the color to settle into recesses. This process not only helps for definition and black lining horse furniture, it also "grays" down the horse flesh for the white spots.

3) Use a fairly small/fine tip brush - I use an old 00-Series brush - for the dappling. Add groups of 3 to 5 white dots in a somewhat geometric pattern, staying away from the head, lower legs and underbelly. Try to arrange the groups so they appear separate from other groups. The dots themselves are irregular in size, as well as not too strongly white - I sometimes add a little water to the brush when applying the dots. This gives some dots a bit of transparency - which adds to the irregularity.

4) This last step is optional, but you can also soften the pattern with a very light dry brushing of white. This can blend in areas that may appear too dark in contrast.

5) The rest of the horse, like lower legs, mane and tail are painted like regular colored horses. That is, black can be used for the lower parts of the legs and white markings at the hooves. Tails and manes for dappled horses can be any color - from white to black.