Here are a couple of German MG08 HMG teams that I hope to use in a Great War game. The figures are Foundry and were picked up at the Bring & Buy at Enfilade! this past May. I'm slowly getting back into painting, but don't feel like tackling large projects at the moment. These painted up very quickly with only a few basic colors and given a Minwax stain. Anyway, hope you like them. 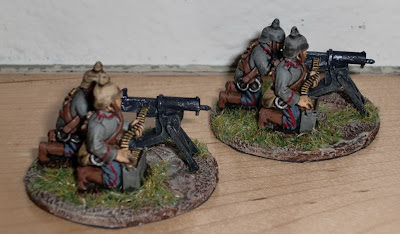 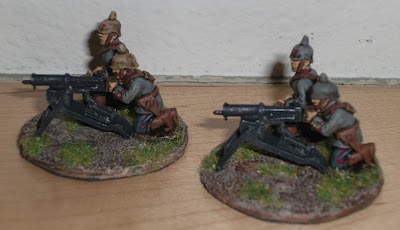 Thank you all for continuing to follow my blog.
Posted by DeanM at 12:09 PM 23 comments:

This figure is dedicated to Changun. It is a Crocodile Games Mycenaean that will be the Army Standard for my favorite WAB army. 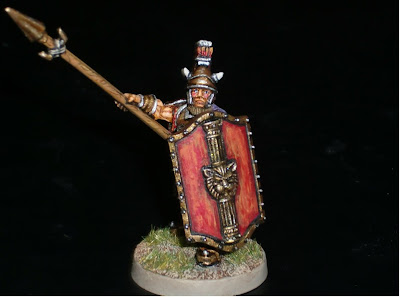 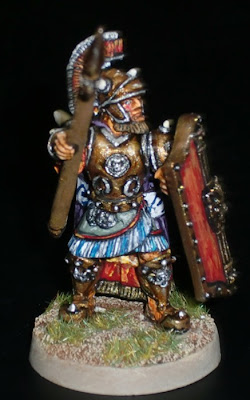 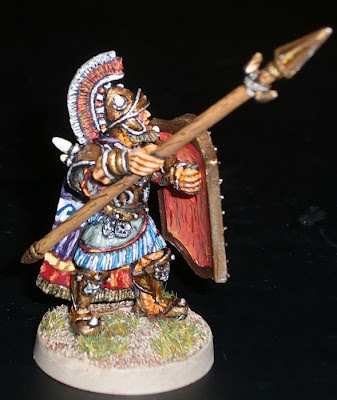 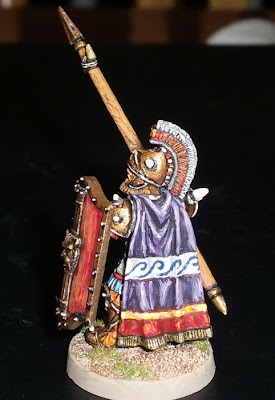 I am posting this with a heavy heart and mixed feelings - mixed feelings because this has nothing at all to do with gaming or painting, which is what I normally post. But I feel like letting all of you who kindly follow my blog know why I haven't posted anything in a while, and the possibility of me not posting anything for some time. A very long story short, I decided to turn my beloved 2 year old dog, Changun (which is general in Korean), into Animal Control. By today, I pray he is running with the Lord above without having to worry about getting into any kind of trouble. I take full responsibility for what he did and what I decided to do. I hope you can understand. If you could, please say a prayer for him too. My kindest regards to all of you. 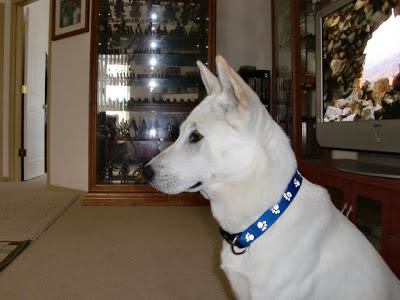 NOTE (I've added more detail since the initial post - I felt the need to clarify what happened - which is the worse thing that I've had to do for as long as I can remember):

A few weeks ago I received an official notice that Changun was declared a "Dangerous Animal" by the authorities. Initially, I was going to fight it at a hearing, but after reading the eye-witness statements and other evidence which I recently received, I decided to withdraw my request for a hearing. Not the least of which was sparing the 14 year old girl who owned the dog that Changun killed. Also, he was a good dog to us, but he was always a bit worrisome around other people and animals. He was always a bit on the nervous side - a fear biter, I suppose some would say. My wife and I loved him dearly, but he was causing us a lot of worry and stress (my wife was actually losing hair).  I was just about to start behavior modification training (even ordered a training collar), but that was before the notice and evidence was received. The actual incident occurred over two months ago (May 2, to be exact) - he was accused of crawling under the back fence and killing the neighbor's dog. Of course, we've felt terrible since that time, and wanted to make things right with them. Strangely, the neighbors had planned to move out the very day it happened. They have not been there since. Although we had thought everything was okay after not hearing from the authorities for such a long time, he still worried us and feared that he could do the same again - or worse, hurt a person or child. We have a fenced yard, but he was able to dig under the fence. My wife still thinks the hole was started on the opposite side. It appeared so, and our dog's paws weren't dirtied at all the day of the incident. To make matters even worse, almost two months after the neighbor dog being killed, a neighborhood kid who apparently has a history of coming into other folks yard uninvited was bit by Changun. My wife had him tied out in our front yard while she was about to wash her car. She saw this kid riding his bike in our culdesac - where we'd never seen him in before (he lives in another culdesac). She waited until he finally left our culdesac and turned for only a second to get the car wash soap and hears the kid crying while standing in our lawn with his bicycle in our yard saying the dog bit his but. My dog had bit him only once as a warning, and it was totally the right thing as the kid came into our yard and he was doing what he should be doing - defending his territory and my wife. But Animal Control was called again and my dog had to be quarantined for 10-days. We were allowed to quarantine him at our home. My wife diligently watched him for the entire time while I was at work for over 10 hours a day. She became even more stressed out during this time. It was just about the end of the 10-day quarantine when we received the notice of Changun being declared a Dangerous Animal. They said it had nothing to do with the recent bite of the kid, but it was for the earlier killing of the neighbor's dog. I was mortified and was going to fight it at a hearing initially. This is the worst thing I can remember ever having to go through. Losing Changun has changed my life and I miss him every day. I am constantly troubled wondering if I did the right thing or not.

Here are some memories of happier days with Changun.
My last day with him - 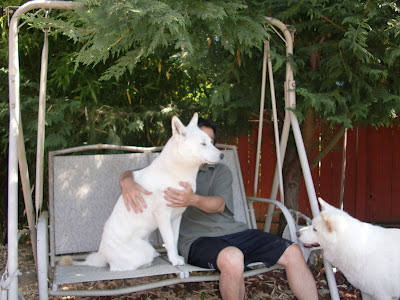 I apologize if I've offended anyone with this post, it is surely not my intent. Nor is it my intent to depress anyone either; I just wanted to let you all know up front if you don't see me making regular post as I had in the past.
Posted by DeanM at 8:33 AM 39 comments: