With an expected busy work week coming up, I pushed ahead and finished up the Perry ACW Zouaves - as French 2nd Empire Zouaves and Algerian Tirailleurs. There are four 8-man squads (2 each Zouaves and Tirailleurs) which are intended for Bolt Action. 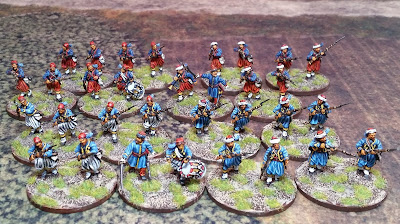 Even though the rules are skirmish, I have them based 2 figures per 50mm Litko round bases. 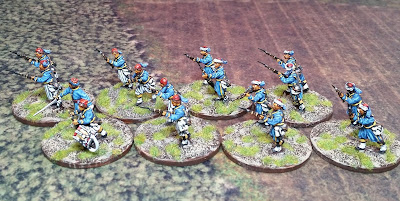 Two units of Algerian Tirailleurs; distinguished by one unit with white baggies and the other in all sky blue. 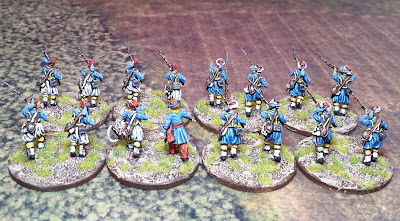 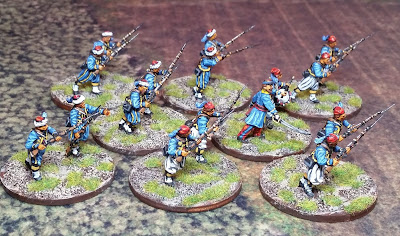 Next up the Zouaves.

The two units are differentiated by one having white cloth wrapped turbans. 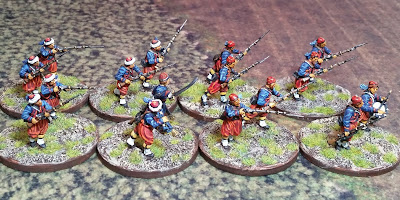 10 of the Zouaves  (with white wrapped turbans) were already painted; I swapped two of their heads with the Tirailleurs. 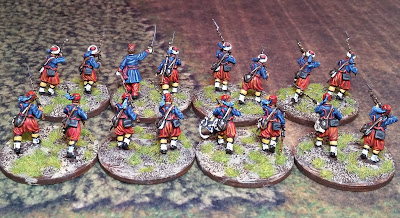 The Cigar Box Battle mat I got from Chris last year is used for the photos. 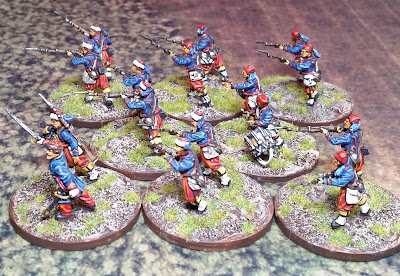 Besides these figures, I plan to get a box of French Line Infantry from Eagles of Empires. I'm waiting until their Bavarians are back in stock before placing an order.  Well, so much for now and thanks for stopping by. Until next time, happy painting and good gaming!
Posted by DeanM at 8:01 PM 42 comments:

Sorry for being away so long, but I finally have something to post. The start of a new project in well over a year. This time a new venture - into the short in duration, but deadly, Franco-Prussian War. Not sure how it'll play out, but I hope to use Bolt Action for squad-sized skirmish games. Adding to some Perry Zouaves already painted up will be another squad of Zoauves and a couple of squads of Algerian Tirailleurs. For opponents, I plan to order some Prussians and Bavarians from Eagles of Empires - once the Bavarians are back in stock. Anyway, here's the Perry figs in the initial painting stages. 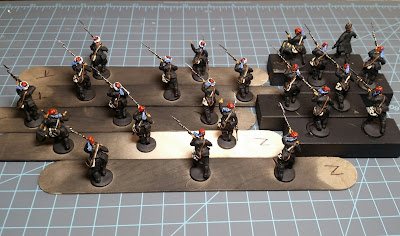 Some images from the French Colonial Army of Africa uniform book I picked up last fall at Fix Bayonets' bring and buy. 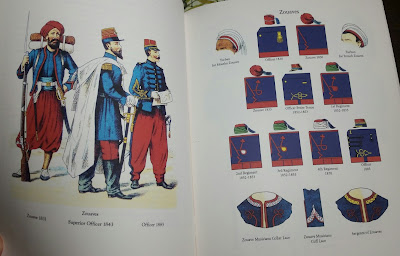 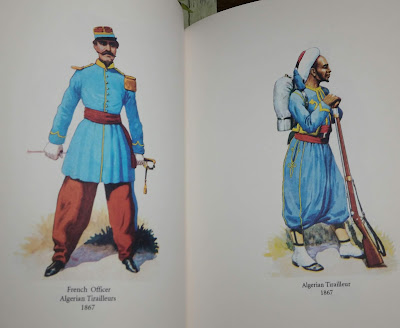 Both Zoauves and Algerian Tirailleurs fought with distinction at the Battle of Woerth - where the French were outnumbered 2 to 1. 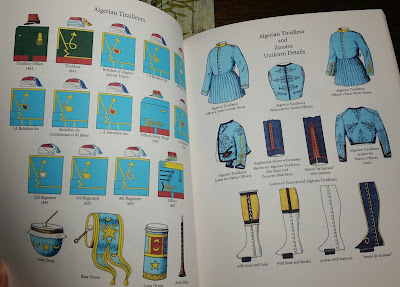 So much for now - thank you for your patience and continued visits! Until next time, happy painting and good gaming!
Posted by DeanM at 7:05 PM 37 comments: