Using available terrain, including the newly acquired 4Ground buildings, managed to setup a First Battle of St Albans scenario table. There are 9 units for the Yorkists rebels and 6 units with the king within the town. There are only three troop types for this scenario: Mounted Serjeants, Foot MAA, and Foot Yeoman with Mixed weapons (spears and bows). Hopefully will have this play-tested next weekend with the assistance of some buddies. I just wanted to see how the table would look with the troops and terrain on hand. Didn't use the guys with pikes and handguns, as I don't think they were used at this battle; also kept the mounted troops to a minimum.
An AAR will be posted as soon as the game is actually played.
Posted by DeanM at 10:41 AM 27 comments:

Completed the 4Ground buildings. Still need to mat down the thatched roofs with watered-down PVA, but the kits are built. The Mordanburg (aka Fantasy) buildings took about 30 minutes each as they had more parts. Mainly the extra work was timber framework is separate and then the plaster in between it are separate pieces; almost like a jigsaw puzzle. The thatched roof hovels are much simpler and took about 15 minutes each - not counting watered-down PVA work still to be done, of course. Appropriate minis are placed next to them for comparison. These aren't the largest buildings 4Ground makes, but they are a good size for filling up the table, IMO. They are sturdy and much lighter than comparable resin models.

Nothing 'bout painting, but just received an order of my very first 4Ground pre-painted terrain. This is incredible fast as I only placed the order on the 15th. The order was actually here three days ago - the 20th - but didn't know they sent it UPS requiring an in-person signature and no one was home. No problem, as it is a very secure method. The shipping was free since I placed an order meeting their £60 free-shipping deal. Haven't opened the kits yet, but plan to either tonight or this weekend. I picked up the "Backstreets of Mordanburgh" set and two Medieval thatched-roofed hovels. All should be welcome additions to my sparse collection of terrain - particularly Medieval. 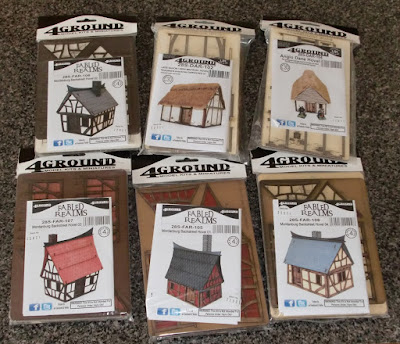 Their inaugural debut should be an upcoming Lion Rampant game based on the First Battle of St. Albans. You know a little bit of Street Fighting Men going on.
Posted by DeanM at 10:04 AM 12 comments:

”...it was the Japs [Japanese military] on the island who were attacked by the kor (ropen). They [Japanese soldiers] apparently shot several wounding them then followed them to caves and blew [blew up] the entrances. They called ships fire on the hills and pounded them for several hours.” - recounted by a resident of the Manus Island area of Papua New Guinea.

The pterosaurs are from an internet source called The Big Zoo Store. They're flexible rubber and were shaped in different positions using heat from a candle. They were painted a light brown color which are described by eye-witnesses. Sewing pins and needles are used to secure them to their metal washer bases.

Picked up a plastic sprue of six Warlord Games WW2 Japanese to see how they were. The sprue has several head, arm and weapon choices. One of the figures is supposed to be in the prone firing position, but he's been converted into a casualty figure laying on his back. They are painted up as Special Naval Landing Forces troops, who wore uniforms in the same basic cut as the Army, but in a green shade. The figures went together very nicely and were block painted and given a Minwax Tudor Satin stain. A bit of highlighting was added over a Testors Dullcote finish. 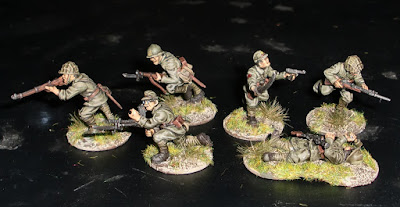 Vallejo Brown Violet with a bit of Green Ochre and Green Grey was used for the uniform. White was added to this for the highlighting. 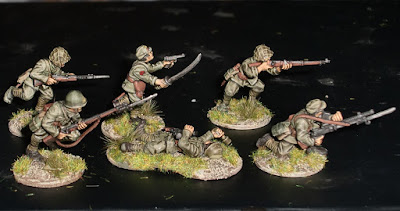 Overall they are nice figures, especially with the choice of different part options. 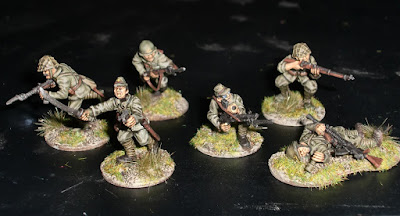 WW2 uniforms take to the Minwax Stain process particularly well; a full force for Bolt Action would be a nice weekend project. 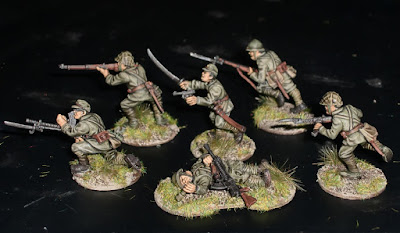 The image below shows them prior to painting. They're on plasticard to raise them before attaching them onto metal washers. The kit is supplied with round plastic bases for the five standing guys, but weren't used. 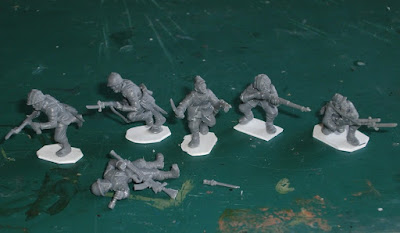 My fellow Hawaiian expat, Kimo, and I got in a nice Lion Rampant game today based on the Battle of Worringen. Kimo chose to run the Archbishop's retinue. This was Kimo's first time with the rules, and only my second time. No worries though as the rules are quite simple and easy to pick up. Here are some images of the game which ended up unhistorical as the Archbishop won handily over he forces of Brabant.
The forces of Jan of Brabant having lost over half of their forces, the game was called a Victory for Siegfried of Westerburg, Archbishop of Cologne. The actual battle was a resounding victory for Jan of Brabant, but bad dice rolls (read failed activations) early on in the game really hindered deployment for the Brabantines. I had lowered the activation for crossbow Shooting from 7 to 6, and this seemed to make them a bit too powerful. Otherwise it was a nice game which flowed smoothly. Kimo suggested that the core rules would work very well for Samurai. Something I may do in the future.
Posted by DeanM at 6:23 PM 28 comments:

It's been a while since my last post due to a heavier workload in June - as well as my 83 year old mom stopping by for a visit last weekend. The weather here in the Pacific NW has been very hot too - 80's and 90's F, and not conducive to painting and such pursuits. In spite of all this, I've been meaning to follow-up on the previous post with a Lion Rampant game based on the Battle of Worringen. So without further ado, here are a few teaser pics of the table just set up - in the living room with the only A/C.
My buddy Kimo and I will play out this scenario on Saturday. One thing I became aware of was the need for a few  more pieces of Medieval terrain. I had to resort to using an Empire watch tower to spruce up the table.
Here is a map which the table is loosely based upon. 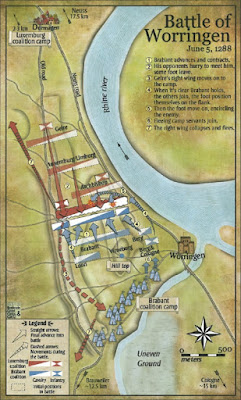