Here's a piece of terrain I worked on this evening. It' s a laser cut wooden kit from Korea picked up off of ebay and arrived surprisingly quick - about a week and a half - during the Christmas mailing season no less.. 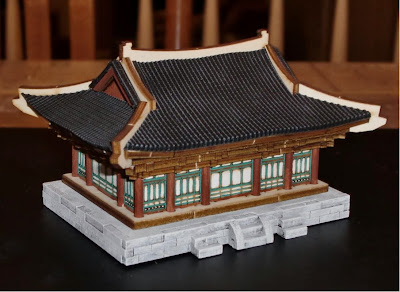 Most of the parts fit together without the need for gluing as the laser cutting is very precise. The roofing was the only area requiring a bit of glue. The roof tiles are from a supplied sheet of rubber mat that is easily cut with a hobby knife using the templates provided. 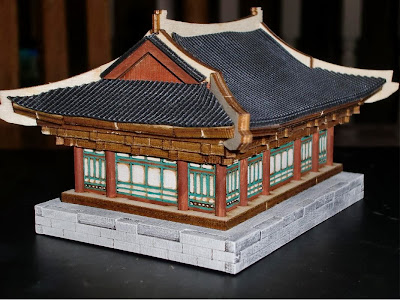 The only parts painted were the stone foundation, arch of the roof, wooden pillars and the sliding doors. Alternatively, the kit can be left unpainted too. 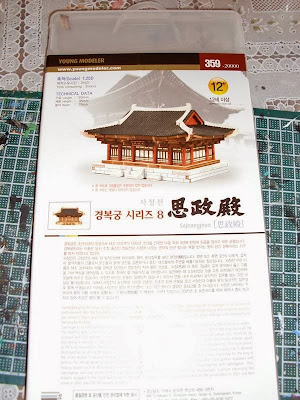 The kit comes in a clear, hard plastic case and with very good full color instructions. The cover states the kit is aimed at 12 and older; but the suggested time for building is way off, at least for me. It says it can be built in two hours. I think if you have already built a few and are familiar with the construction - as well as not painting it, it may be possible. For me, it took about twice as long - mainly due to the painting. That said, it isn't a difficult kit to put together. 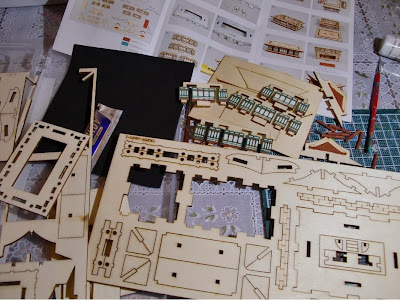 But here's the kicker - the kit is a 1/250 scale replica of the original palace of the Joseon Dynasty - Sajeongjeon. It is probably good enough as a temple for 15mm, but for 28mm it will have to be a facsimile for a small shrine. The same company that makes this kit also sells larger scaled versions, but they cost about twice as much as this one. As most of the terrain for the Imjin set up are more representational than "true-scale" it should work. I might also raise it a bit to give it an illusion of size. Anyway, just a brief post to keep the blog going. 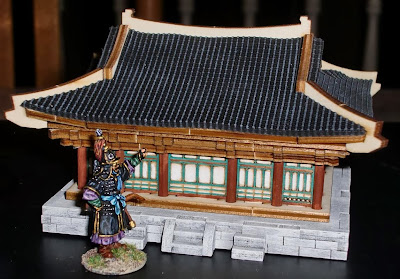 Siege of Haengju - Set Up

Finished the outer barricade of stakes, as well as basing the cavalry on stands of three figures each. Here are some shots of the units staged as they might be in the final assault of the Japanese. The light troops (bowmen and teppo) are on stands spaced about an inch apart to reflect them in open order.
A play test will shortly follow. Thanks for visiting the blog!
Posted by DeanM at 7:58 PM 28 comments:

How to Make Field Barricades with Bamboo Sushi Rollers

Here are some WIP shots of what will be the outer barricade of stakes General Kwon Yul ordered built prior to the arrival of the Japanese. They are  built using bamboo sticks from a sushi roller my wife let me have. I need to buy a couple more - one more to complete the walls and one to replace the one I cut up. Perry Samurai for height comparison. 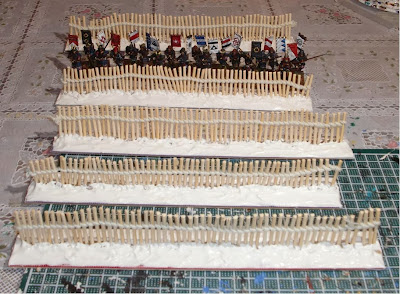 The stakes still need to be stained and the bases flocked. The bases are rulers I bought from a dollar store (two for a dollar). Here are the main components: 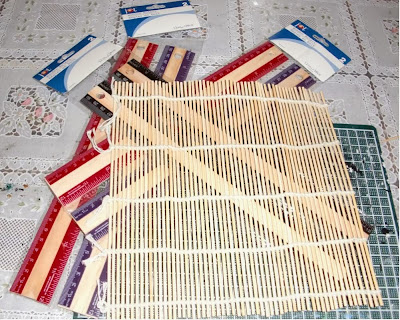 A pair of metal shears were used to easily cut the bamboo. The only trick was to keep the ends of the sticks from trying to unwind off the string. I used some clips to hold them in place - but tape could just as well be used. 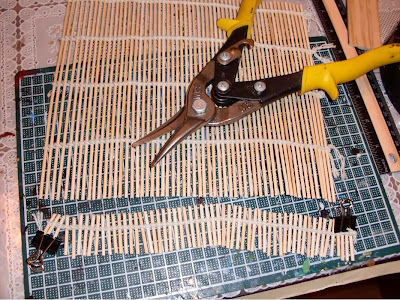 A trusty old glue gun (formerly owned by my wife) was used to secure the bamboo to the ruler. Finally acrylic caulking was spread over the base. 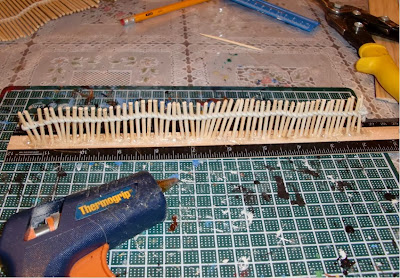 All in all, I'm pretty happy with the way they turned out; and they were done rather quickly as I just worked on them for a couple of hours after work tonight.

Below is a detail from a painting in the Seoul War Museum depicting the fighting around the outer barricade of stakes during the Siege of Haengju. The ground was probably snow covered as the siege took place in February - still the dead of winter in Korea. 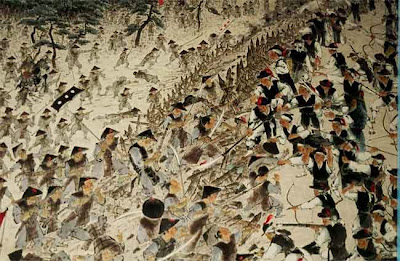 For the Imjin War game, I decided to go with the Siege of Haengju. It involved the successful Choson Korean General Kwon Yul and several famous Japanese generals, including Kuroda Nagamasa - two figures I have already. One of the three most-celebrated Korean victories during the Imjin War, this battle took place a little north of Seoul, which the Japanese had already captured and occupied. Actually, the Korean king and his retinue had already fled the capital before the Japanese arrived. Kwon Yul with a small force of regular troop moved to an old hilltop fortress near the village of Haengju. It was here that the Japanese, greatly outnumbering the Korean defenders, decided to wipe out any resistance before the Ming forces arrived as reinforcements. I plan to alter history a bit by allowing relief Ming Cavalry to arrive, as well as Korean Cavalry. The actual battle was mainly an infantry battle as far as I can tell. Although some very cool Korean artillery was used, like something called Water-Wheel Rock Cannon. Here are some WIP pictures of the table I started on this afternoon.
A modern map of the area - note how close the fortress is to the Han River. In fact, the fortuitous resupply of much needed arrows for Kwon Yul's forces arrived via the river late in the battle. 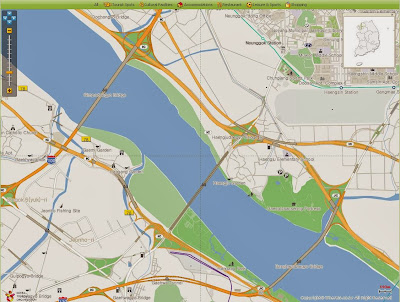 A view of the fortress from the north west - note the rice paddies - these are very nice terrain pieces from Hotz Mats. 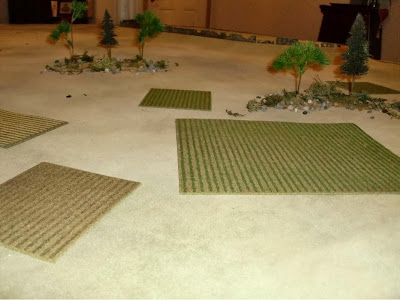 A view of the fortress itself - it was a fortress from earlier times and parts of the wall were in ruin. An outer ring of stakes was added on Kwon Yul's orders - I will need to make some as part of the Korean forces will be outside of the stone walls. 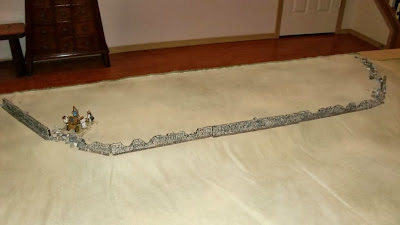 I used some foam core and pieces of packing foam to raise the height of the fortress proper. 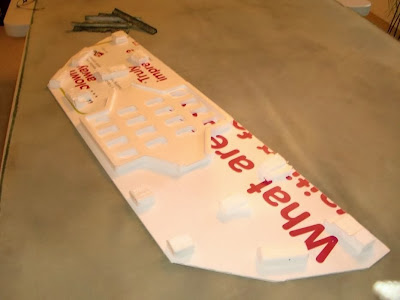 Since I had the re-based infantry out, I figured I'd add the rest of the armies for a photo op. All of these figures were painted a while ago, but don't get out of their barracks much. Up first, the invaders - an army under the command of Kuroda Nagamasa. Note, the banners are painted up by whim (mostly taken from the Siege of Osaka scroll), and not historical to the Nagamasa clan as far I know. 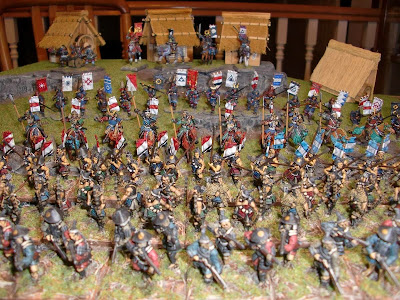 Next a close up of Nagamasa and the generals of the three divisions. The large teppo cannon on the right flank is a Dixon model as is Nagamasa himself. The generals are Perrys, as well as the foot samurai. The rest of the figures are Old Glory - the mounted samurai and ashigaru spearmen have plastic Wargames Factory banners. The huts are from a local thrift store here - which unfortunately no longer carries them. 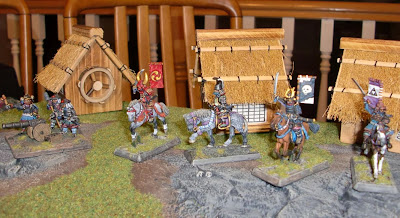 Close-up of the foot samurai on the left flank: 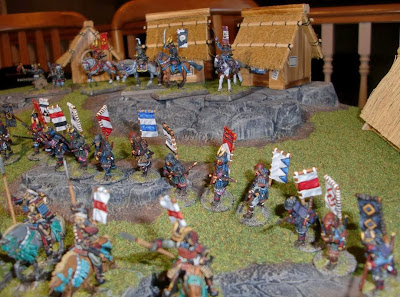 And now for the peaceful Hermit Kingdom - all Perry figures except for the Allied Ming Cavalry which are from The Assault Group (TAG). All the banners are from the Perry website. 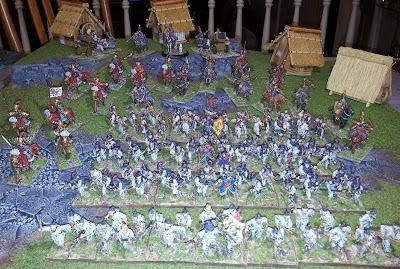 Close up of the Ming Heavy Cavalry - which are actually sold as Song, the previous dynasty, but close enough: 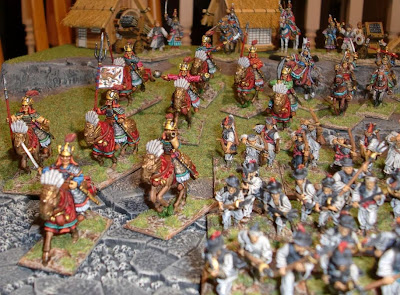 Korean Medium Cavalry - in addition to being armed with bows, some have flails and swords: 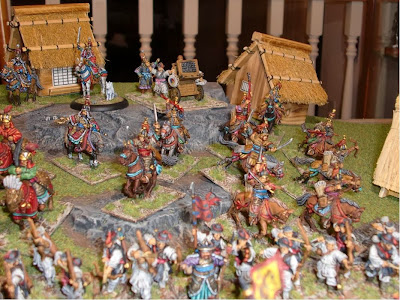 The Korean overall commander, Kwon Yul. This was the piece that started the whole army - along with the memorial figure of my dog, Changun. He's flanked by Hwa Cha rocket artillery. 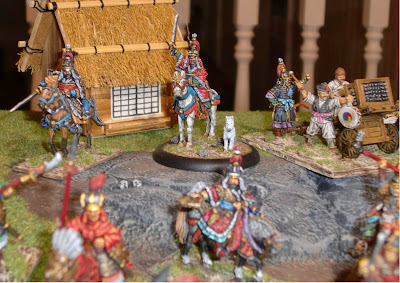 The Ashigaru and Choson infantry have been re-based on 40mm squares from Litko. The figures are based for Hail Shogun; a modified version of Hail Caesar. It's basically the same rules except less figures overall for units. For instance, two to three bases of infantry will be a Standard sized unit. As both sides will be similarly sized, there should not be a problem. Anyway, here are the Choson Infantry: Militia and Government troops. 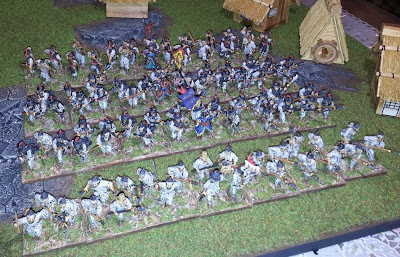 Here are the Ashigaru: Teppo, Archers and Spearmen. 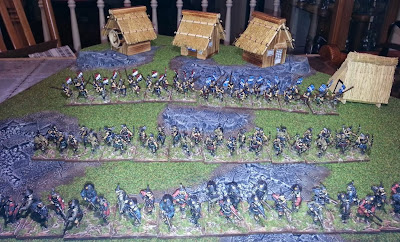 As you may be able to see, all of the Ashigaru and based 3-figures per 40mm square. This not only eased the position on the figures, but provided for more units.
Posted by DeanM at 5:44 PM 6 comments:

Planning to use Hail Caesar rules for an Imjin War game, I decided to re-base all of the Old Glory Japanese Ashigaru and Perry Choson Korean infantry onto Litko 40mm square bases. All of the figures were formerly based on metal washers. Here are the the Perry Koreans, less the archers, stuck onto the bases with acrylic caulking. 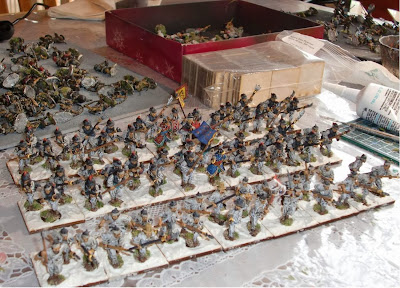 As I'm providing both sides for the game, I based some 3-figures per and some 4-figures per base. This not only eased raking up the figures, but stretched out the size of units. The archers (and ashigaru teppo) will all be 3-figures per. Now, I'm off to get a hair cut ,and then lunch with the missus. I usually get a hair cut every two months or so, whether I need it or not :)
Posted by DeanM at 10:07 AM 17 comments: