Worked on the shields as they are, for me, the most difficult/challenging part of the project. Great looking transfers, but sort of nerve racking to apply. 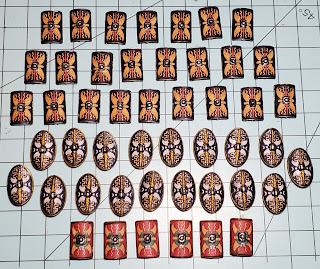 They come in sheets of 24 scuta, 2 small rounds (for musicians/standard bearers) and flags as well. About $10 including shipping; so a pretty good deal.  The issue is they are a little flimsy and tend to curl over at the ends. I ended up floating them in water to seat them properly. Also, you have to precut the opening for the shield bosses. 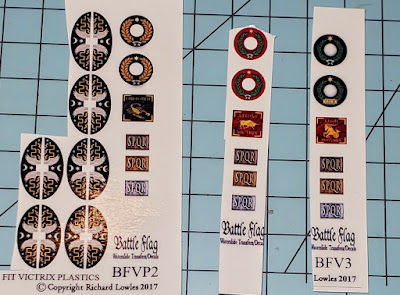 I prefer traditional decals like the ones that come with Warlord Games sets. They're thicker and as I use a decal softener can get them to seat well.

So much for now, thanks for stopping by and wishing you all good health and hobby pursuits.

Finished the remaining 60mm Expeditionary Force toy soldiers today. Very cool diversion, but ready to get back on track with the Hail Caesar project. 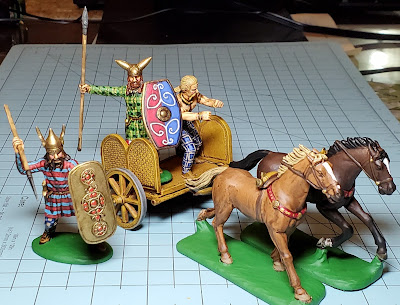 Fun to paint up, and may get them into a skirmish game someday.

I glue gunned the driver directly onto the chariot, but the warriors can dismount and swap turns on the ride. 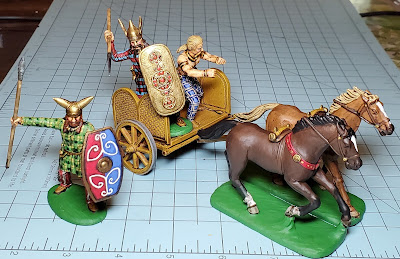 Also, the Victrix EIR Legionaries arrived today.  Took about a month and a half. Strangely, the LBMS Gallic shield transfers shield transfers which were supposedly mailed a few weeks before then still haven't arrived. 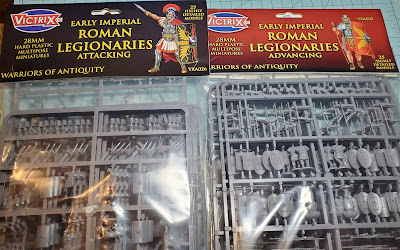 I think I'll start on the Romans and get back to finishing up the Celtic chariots. Thanks again for stopping by and wishing you all good health and hobby pursuits.
Posted by DeanM at 11:07 PM 20 comments:

Just a quick update of the Expeditionary Force Celts I'm working on along with the Victrix chariots. 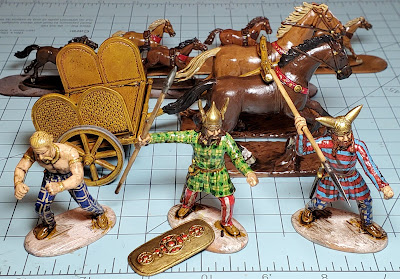 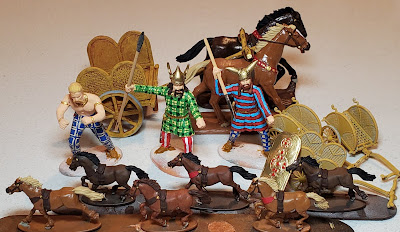 Thanks for visiting, and wishing you all good health and hobby pursuits.
Posted by DeanM at 7:11 PM 16 comments:

Finished them up today - added some dry brushing and ink washed after the Minwax staining. Didn't spend too much effort with little details. 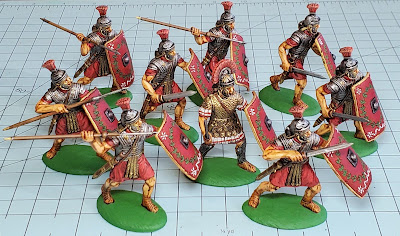 The shields had engraved designs, which really helped painting them, but I rushed and botched the stars a bit. The laurel wasn't too bad and an ink wash helped the finished look. 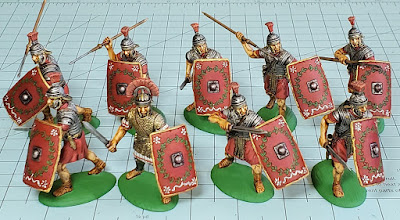 The detail and sculpting are pretty good considering they're basically toy soldiers that are pretty much unbreakable - i.e. kids could have a good time with them. 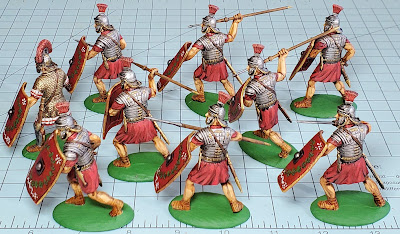 I used a glue gun to affix the shields to the arms - worked out nicely. 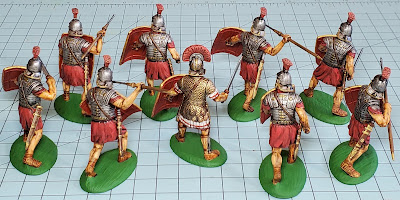 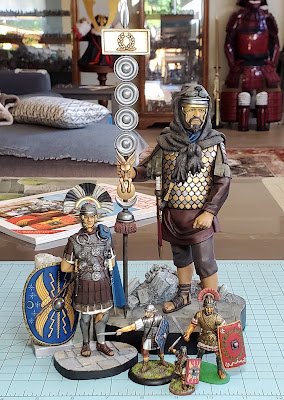 Amazingly, I'm still awaiting the arrival of LBMS transfers for the long ago painted Victrix Armoured Gauls - and the Victrix EIR Legionaries. It's been over a month for the transfers - and just about a month for the Legionaries. I'll probably start on the Expeditionary Force Celt Chariot and Crew - or maybe glue together the Victrix Celt Chariots. Until next time, wishing you all good health and hobby endeavors!
Posted by DeanM at 7:21 PM 26 comments:

I really should have started on the Victrix Celtic Chariots, but felt a little diversion was needed. Here are the Expeditionary Force Romans with a Minwax stain over a very basic block paint job applied with a fairly large brush.

For "toy soldiers," these are very impressive. Not only are the heads and arms interchangeable and poseable, but the weapons are made with harder plastic and don't have the bendy issue with softer plastics. The detailing is quite good too - most of the expected items are nicely sculpted. A Victrix 28mm Roman in front for scale comparison. 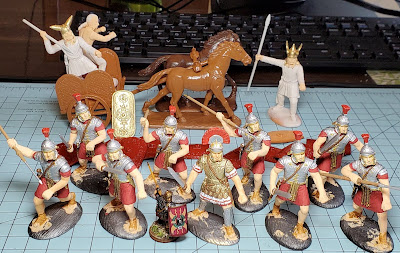 Prior to the staining; with the Celts and shields in the background. I used rattle can spray paint for the base coating. The rest of the areas were mostly painted with Apple Barrel craft paint which I picked up for .50 cents a bottle.

Thanks for allowing this indulgence and wishing you all the best in hobby and health.
Posted by DeanM at 6:18 PM 20 comments:

Been out of sorts, painting wise, for a week or so. Managed to paint these three guys today - the horses were done earlier. The set is actually called EIR Mounted Generals, but one of them is clearly a Centurion - and I'm not sure he'd be classed as a general. Anyway, my buddy gave me two sprues (6 mounted figures total) of this set on his way to far off lands. He's also the one who gave me the 16 EIR Legionaries. Amazingly the Victrix EIR Legionaries I ordered back in April  (mailed after restocking on 22 May) still haven't arrived. 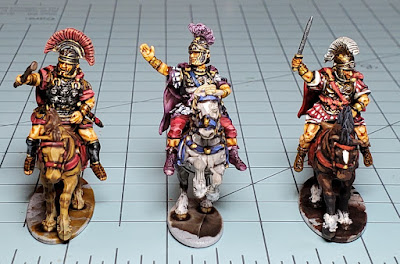 Plan to add another figure or two prior to basing them on command stands.

Really nicely sculpted and detailed figures; and best of all they're plastic so you can easily interchange arms and heads, etc. 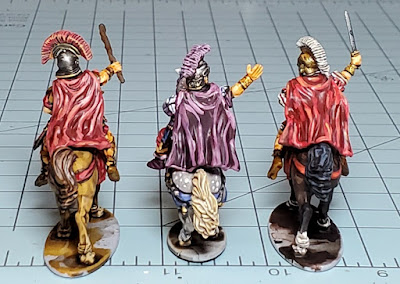 I might use spare shields from the EIR Cavalry set for the some of the other three remaining figures on the other sprue.

During a bout of impulse buying, I ordered a set of Victrix Celtic Chariots and a box each of Expeditionary Force Romans Legionaries and Celtic Chariot from Hobby Bunker. The box says 1/32 scale, but the web lists them 60mm - and they are larger than 1/32 - 54mm. I plan to paint them up as traditional toy soldiers - maybe even gloss coated. 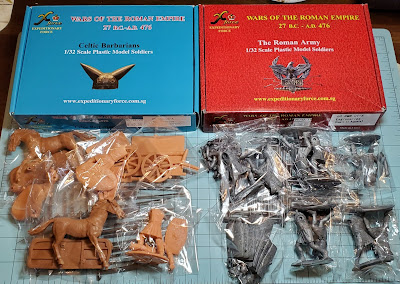 Thanks again for dropping by and wishing you all good health and hobby pursuits!
Posted by DeanM at 6:37 PM 36 comments:

Finished basing the box of Warlord Games Celts. One of the stands (with the standard bearer with the Battersea shield) was from the earlier Britons set.

Trying to have them in less lunging poses, these ranked up a little better than the Britons.

They're based 3 figures per 40mm Litko squares and six bases on movement trays, also from Litko.

Along with the earlier Britons, they're in four 18-figure warbands. 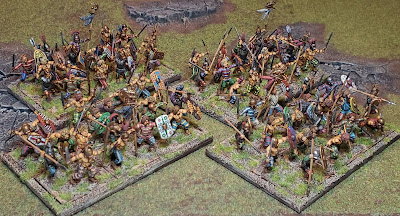 Although 18 figure units aren't that big, the Romans will be in smaller sized units, so should work out okay. Also, the table size will only be about 8x5 feet (3 folding Costco table).

Still waiting on the order of LBMS shield transfers for the Victrix Armoured Gauls. They'll be in two smaller warbands, but given Elite status. Hopefully, the transfers and EIR Legionaries will show up soon.

Thanks for stopping by and wishing you all good health and happy hobby endeavors.
Posted by DeanM at 3:07 PM 41 comments:

Figures are done and just have to add their shields and base them. I really like these figures, particularly with the Victrix Gallic heads. Although hard to rank up due to their poses, they certainly have that warband look. 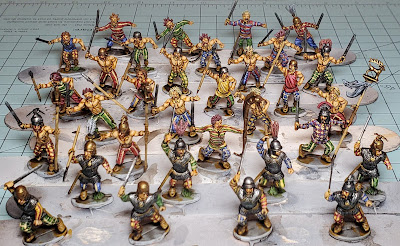 Thank you all very much for visiting, and wishing you all good health and happiness in the hobby.
Posted by DeanM at 4:15 PM 11 comments:

As with the previous Britons set, these have  Victrix Gallic head swaps, along with a few metal ones from the Britons set. 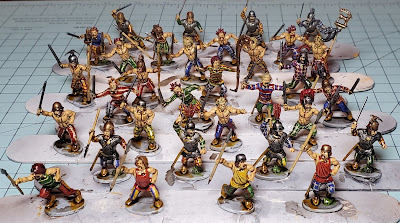 Minwax stain over basic block painting. Highlights and touching up after they're dried and Dullcote'd. I noticed after painting the carnyx guy that his tunic is in Rastafarian colors. 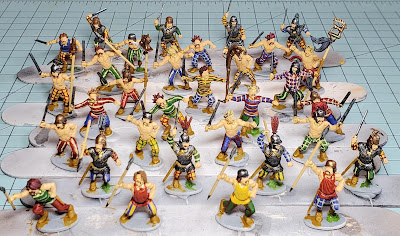 Thanks for visiting and stay safe and healthy!
Posted by DeanM at 9:08 PM 26 comments: