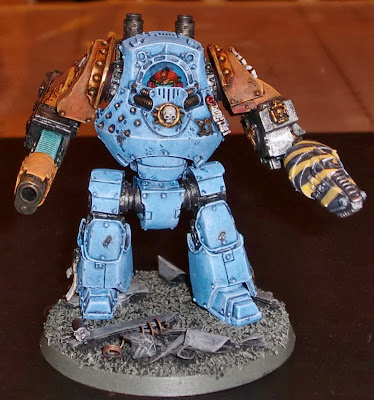 Some of the debris on the base are from an old pen - like the coiled spring. 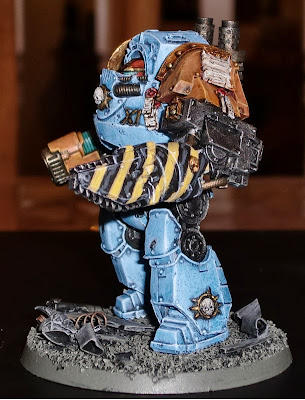 The head, arms and waist are magnetized for different poses. 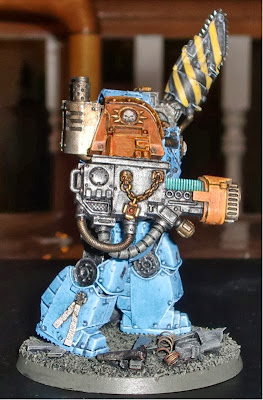 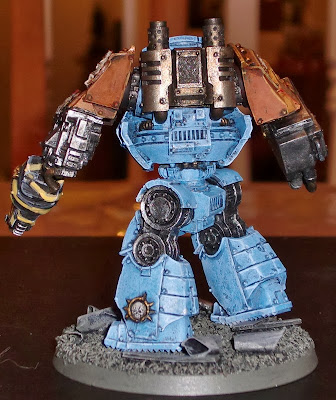 Here he is along with brethren in Terminator and Power armor. 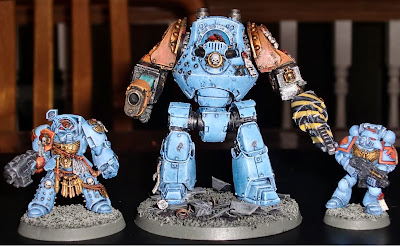 Here's the torso (sarcophagus) and legs. He's painted up battle scared as a "relic" ought to be. 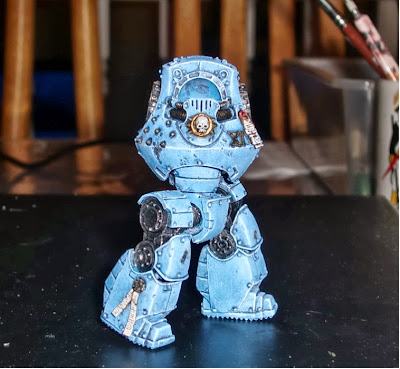 The original grilled emblem on the torso was carved off and replaced with a skull. A couple of purity seals were also added - one to the torso and one to the right lower leg. 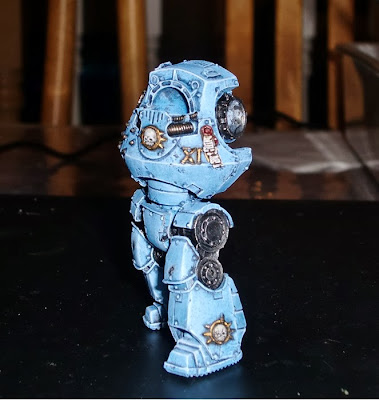 The shoulder guards will be painted orange - the other main color of the Marauders. 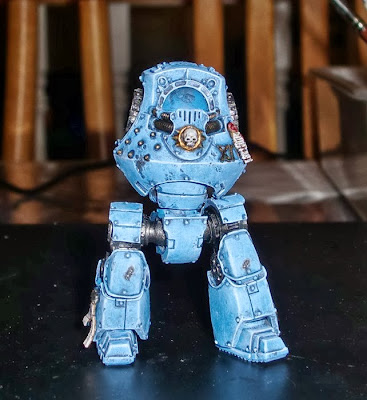 This is a Forge World resin model which I think is called a "Death Guard Legion" Contemptor Dreadnought. 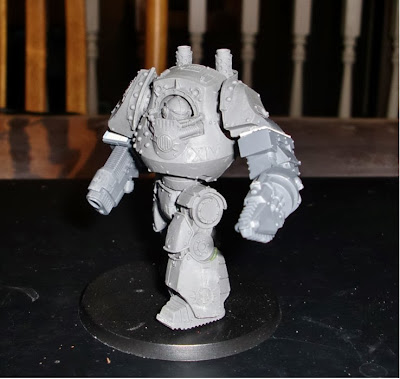 I was lucking enough to pick the body kit up off of ebay for a fraction of the original cost. It was a Russian seller, who listed his location as Siberia! I was taking a chance, but saw he had a high number of favorable ratings, and the bid was so low (only one other bidder!) I figured, even if I got ripped off the money was less than a lunch meal. Anyway, it showed up the other day after only three weeks after winning the bid. It was very well packed and everything was included - even the bag. 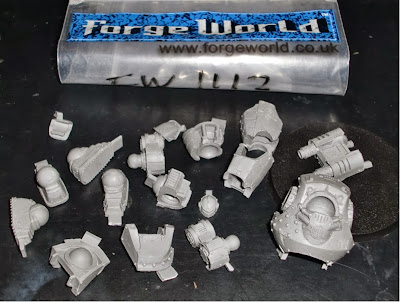 The arms are another ebay purchase as bit parts from "regular" Dreadnoughts. I used some thin credit card plastic to modify the arms to fit onto the Contemptor shoulder guards. The body, arms, shoulder guards and head are magnetized for changing poses - as well as swap outs of arms in the future. 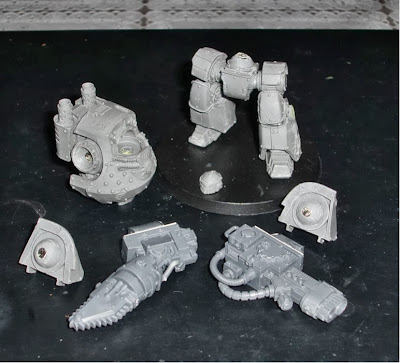 It's a cool model and one which I wanted when I first got the Space Marines bug - but didn't want to pay the full price - luckily there is a nice Siberian on ebay with deals like this. 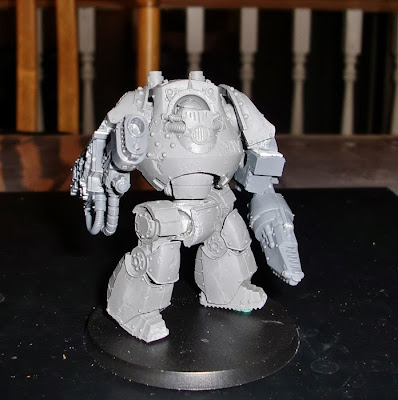 A few different poses - the legs are fixed as it would take the use of magnetic ball joints, and that is too much work. 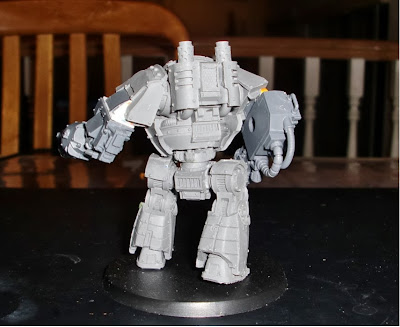 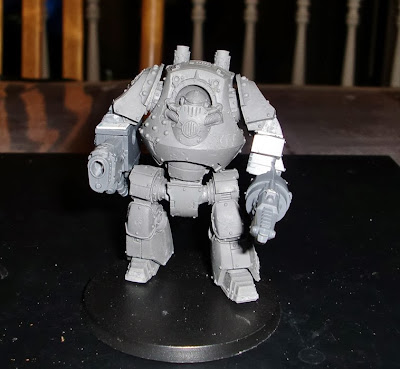 Painted up the standard - another bit part off of ebay - I think from a Dark Angels Deathwing set. 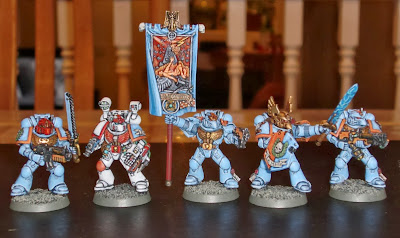 As the standard is sculpted in high relief it wasn't too hard to paint and beats anything I could do freehand.
Posted by DeanM at 10:29 PM 18 comments: 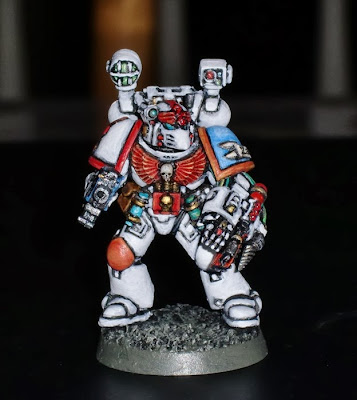 I may clean up the lettering on the scroll a bit. 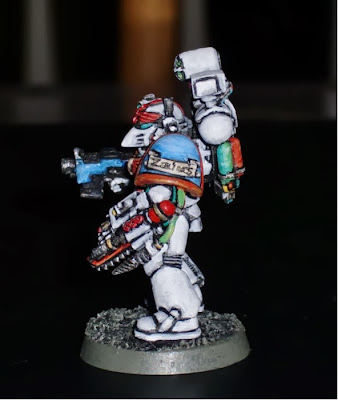 The helmet is another bit part from a Ravenwing Command set. 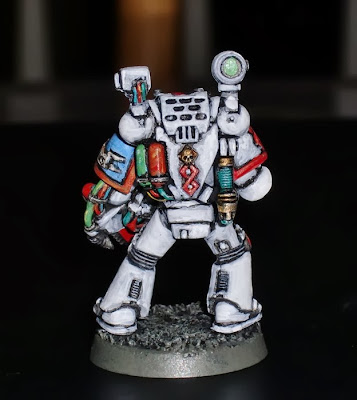 The white Power Armor should make him easy to spot on the battlefield, by friend and foe alike. 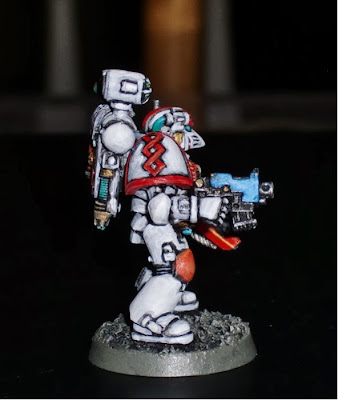 The Command Squad is about done - still need to paint up the Company Standard, but I also will add a Commo guy with the spare kneeling legs and other bit parts. 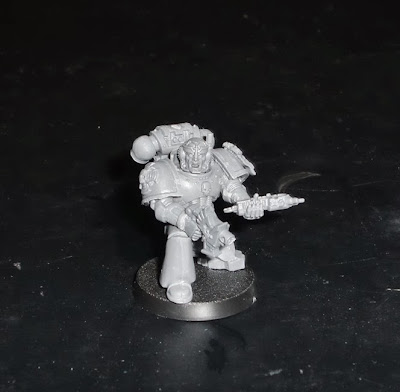 Still need to paint the Apothecary as well as the standard, but the balance of the Command Squad for the Marauders are done. 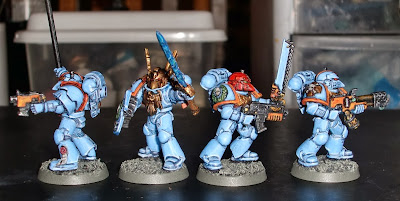 The beaky helmeted heads are from an ebay bits purchase. I believe they are from the Ravenwing Command set.
Posted by DeanM at 5:46 PM 20 comments: