As threatened earlier, here's a group photo of the Celtic/Briton army to date. Mostly Warlord Games and Victrix plastic figures; two metal chariots are from Renegade. I may add few other figures/small units later - possibly druid/fanatics, hunters and villagers; but for now, pretty much done. 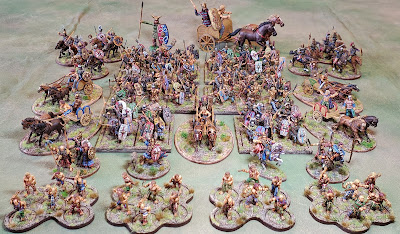 I'll likely take a break from Ancients and work on either the Pike & Shot or Fallschirmjager boxes which were picked up from the closing sale a few weeks ago. 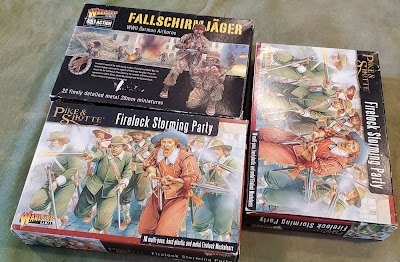 I'm a bit intrigued with Pike & Shot as I have virtually no knowledge of the period. Until the next post, wishing you all the very best!
Posted by DeanM at 12:52 PM 45 comments:

This is the third figure from the Celtic Heroes set.  There's another figure in the set of a druid, but don't plan on painting him up anytime soon. (oh, and I see this is the new version of Blogger - hope it works out okay). 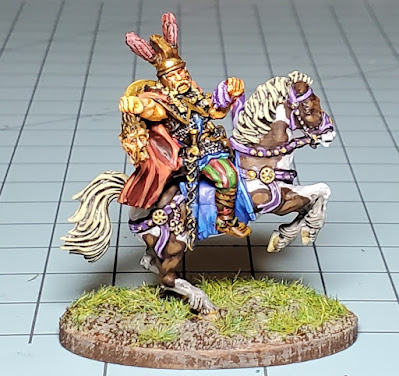 I replaced the horse with one from the Victrix EIR Generals set. The original one seemed a bit too small. Luckily the resin and plastics were easily modified with the help of a Dremel and some Green Stuff. 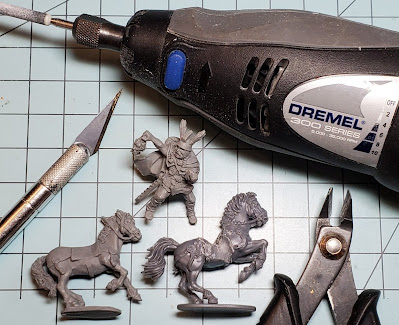 A nice figure, appropriately "heroic" in size and sculpting. 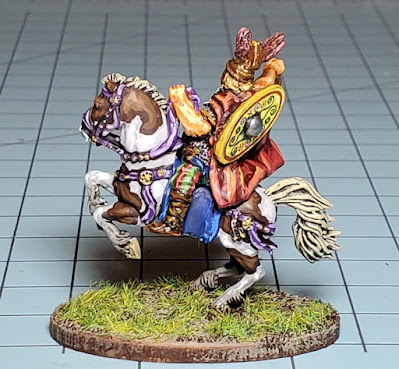 I added some Green Stuff to lengthen the reins. 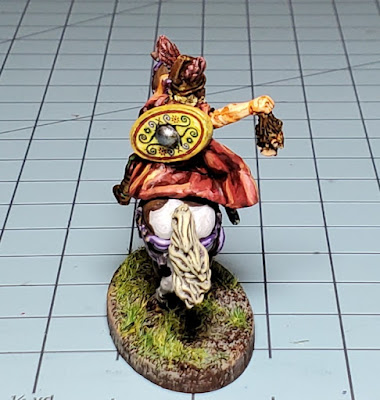 The shield is molded onto the figures, but the same size a other Warlord Celtic shields so a decal fit without issues. 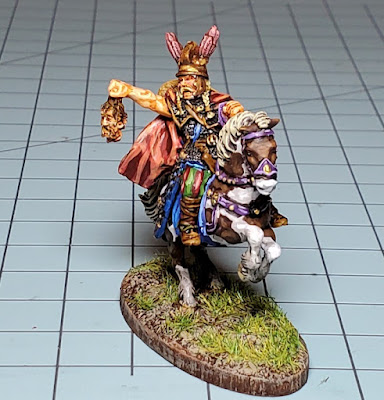 I was going to base him on a 50mm round, but used a regular sized oval single figure base. Might use him as either a spare commander or possibly a messenger.
This figures should complete the Celtic/Briton army for now, and will post a group photo of the army to date next. Thanks again for dropping by and wish you all the best. Here, the rain just started and we should be in the rainy season for awhile. Usually not looking forward to the rainy season, but with the smoke from fires the last couple of weeks, a good change.
Posted by DeanM at 6:31 PM 31 comments:

The two "big guys" on each stand are from the Warlord Games SPQR Heroes set. Along with the bare-chested guy (Lucterius - according to the set) are a previously painted standard bearer and musician. The winged helmet guy (Vercingetorix) has a hound from Black Cat minis. 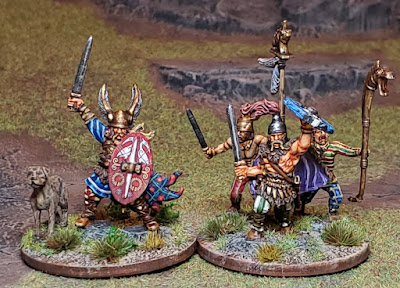 "Vercingetorix" has a Victrix shield with LBMS transfer. 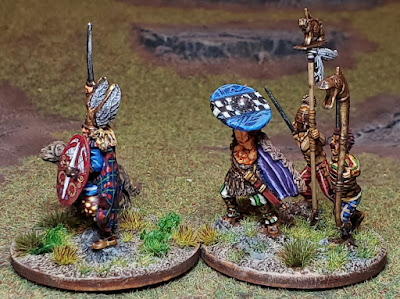 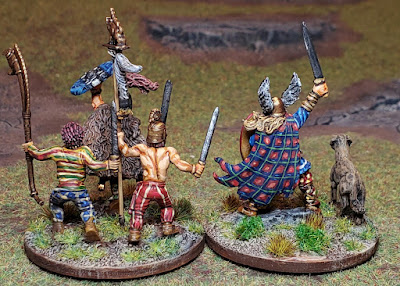 Except for the hound, all the figures are plastic. Actually, the two hero figures are made in a softer plastic - somewhat pliable, like many pre-painted toy figures. 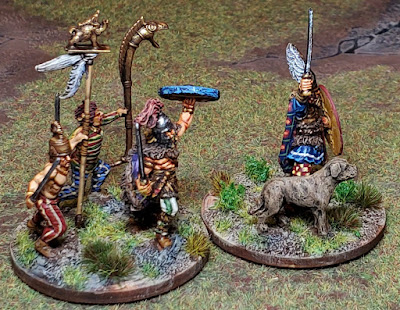 I used the spare hound as the size and pose of "Vercingetorix" takes up quite a bit of the 50mm round base. Didn't want to crowd another "human" figure on it.

Next up is the mounted figure from the set - but I'm trying to modify a spare Victrix horse for him The horse that comes with the set appears very undersized - kind of like a large dog. There's also a Druid figures, but don't plan on painting him up right now. Once the mounted guy is done, I hope to take some pictures of the Celtic army in total.

Thanks again for visiting and wishing you all good health and happy hobby pursuits. Speaking of health, here in the Puget Sound area, we've been blanketed in smoke from fires burning not only in Washington, but also the airflow is bringing up smoke from fires in Oregon and California.
Posted by DeanM at 9:31 AM 38 comments:

Not sure if these are available anymore, as I picked them up at the Panzer Depot sale. They were in the storeroom along with othet OOP stuff. 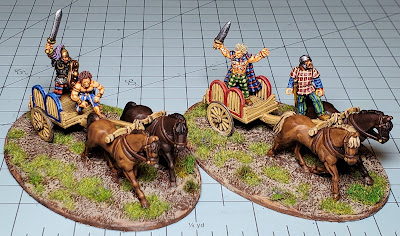 Welcome additions to the Celtic army with 3 other chariots from Victrix. In fact, the crouching driver on the left is a spare Victrix figure. 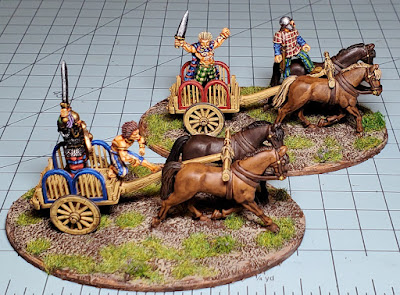 The driver standing on the pole is s secured with brass rod. 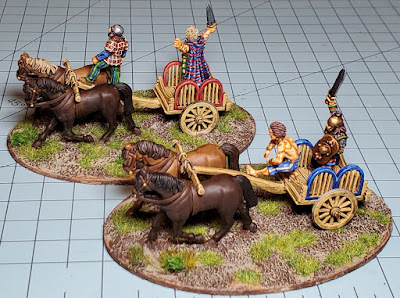 The swords are GW-esque sized, but match the sculpting style. 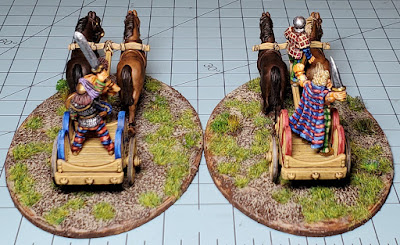 There are now 5 chariots for the army.  Next up are the Warlord Games Celtic Heroes.  Thanks again for dropping by, and best wishes to you all.
Posted by DeanM at 8:57 PM 28 comments:

Finished on 25mm Litko rounds and in Litko movement trays. 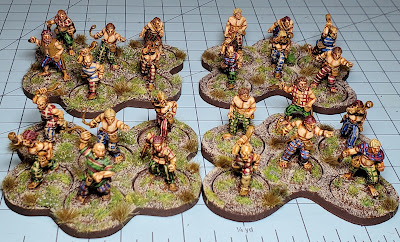 I already had the trays, which worked out nicely as I plan to run them in small 6-figure units. 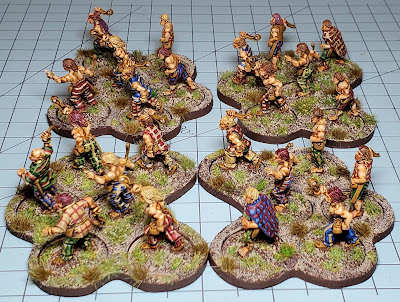 So far, these are the only metal figures in the Celtic army. Warlord makes their slingers in soft "resin" now, but these were old stock from the Panzer Depot. 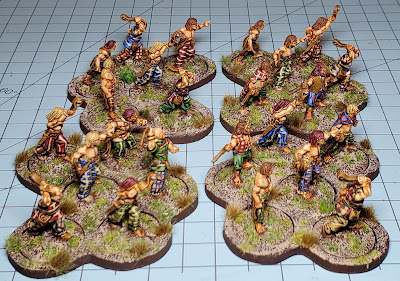 Both the Warlord and the Crusader figures have nicely animated faces. 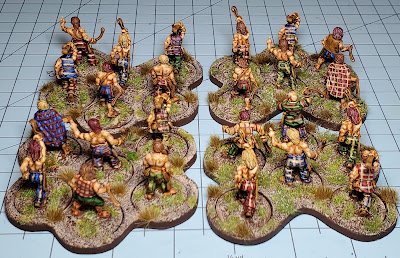 Here are the Warlord Games figures below. 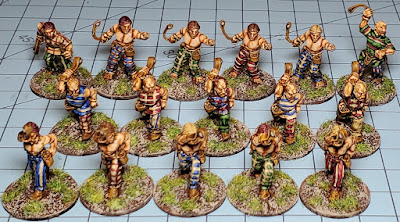 Next are the Crusader Miniatures figures which are actually listed as Dark Age Irish. Close enough for me as earlier Celts. 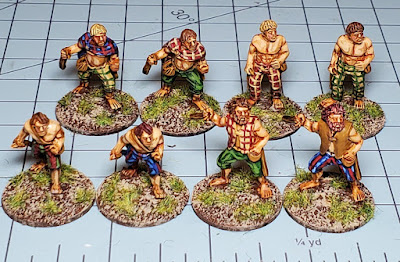 Next up are the two Renegade Celtic Chariots, also metals. Thanks again for stopping by and wishing you all good health and happy hobby pursuits.
Posted by DeanM at 8:41 PM 22 comments:

These are some of the figures picked up yesterday from the Panzer Depot sale. 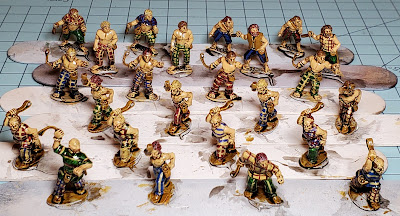 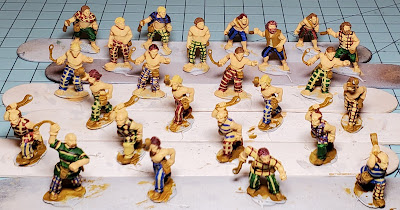 They'll be much needed missile troops for the Celtic army.

Thanks for your visit and best wishes to you all.
Posted by DeanM at 9:21 PM 11 comments:

The best historical gaming store in our local area, The Panzer Depot, is unfortunately going out of business. The owner, John, and a former paratrooper with the 82nd, announced this yesterday on the Northwest Historical Miniatures Gaming Society Facebook. Sadly, he mentioned times were getting tough and the whole Covid situation was the final nail in the proverbial coffin. He also said all products were 20-60% off. I figured it was the best of a bad situation for him and stopped by to do my part. I managed to pick up a few things that I wanted, and a few things that were too good to pass up. 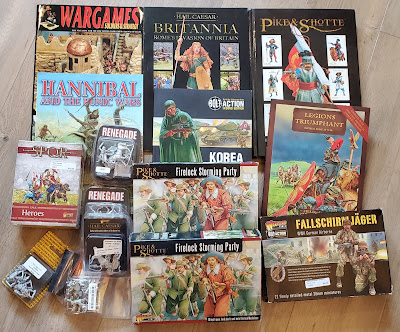 The WAB Hannibal and FOG books were a $1 each. For the record, I've never played FOG, but got the book for the fluff and illustrations. I also got the last two Renegade Celtic Chariots. They look like a good size match for the Victrix ones. Also,  got the last pack of Warlord Games Celtic Slingers and Crusader Irish Slingers. I wanted these to add to the Celtic army.

Anyway, I wish the best to John and did my small part to reduce his inventory.
Posted by DeanM at 4:49 PM 23 comments:

Pardon my slightly bombastic post title, but here's another version of a Macedonian-Successor army of which most of the original units being sold off several years ago. The only ones I sort of regret selling are the 100-plus Foundry Phalangites. Their replacements are Victrix plastics. In fact, most of the current troops are Victrix plastics. The elephants are heavy metal Aventine models which, along with the Foundry and 1st Corps Hypaspists, are from the original army.

Here's a picture of my old Successor army. A lot of the figures are with my local gaming buddies, however, the Foundry phalangites were sold to a gentleman in Texas, IIRC. 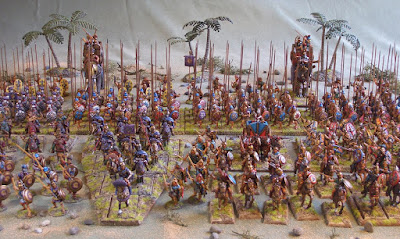 This should be enough for a decent Hail Caesar game against my buddy's army - however, I have to await his return from an overseas deployment next year. Thanks again for dropping by and best wishes to you all!
Posted by DeanM at 3:25 PM 35 comments:

Painted up the two remaining figures from the set. Used the smaller Aventine LBMS transfers on spare shields. 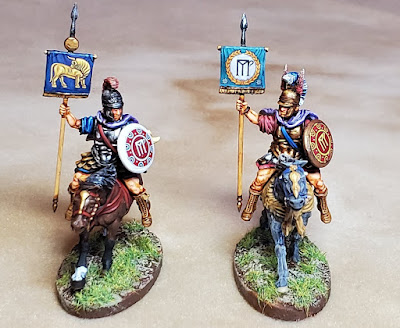 The standard with the sun disc is from the Phalangites set. 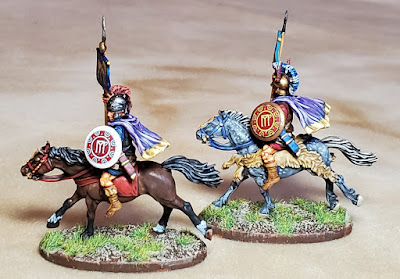 Besides standard bearers, they could also be used as messengers, similar to ADC's in Black Powder 2. 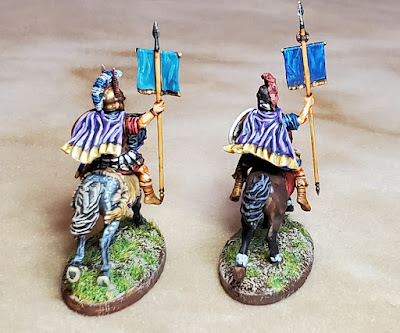 They might also be part of a command stand. Here they are next to Relic Antiochus and Pyrrhus figures. The standard bearer on the round base (with Pyrrhus) is an old Redoubt Etruscan or Oscan figure.

Anyway, just wanted to paint the two remaining figures up. Thanks again for stopping by and best wishes to you all.
Posted by DeanM at 2:25 PM 14 comments: