I just finished this nice model from Old Glory. I actually finished the church & tower last week, but only finished the cross today - wasn't sure what color it should be, but settled on plain white. It is intended for Peninsular War scenarios; and possibly for WWI & 2 stuff in Southern France. Here it is with Victrix British. 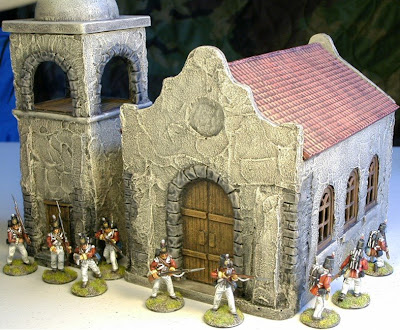 Below is a shot of the side of the church adjacent the bell tower. 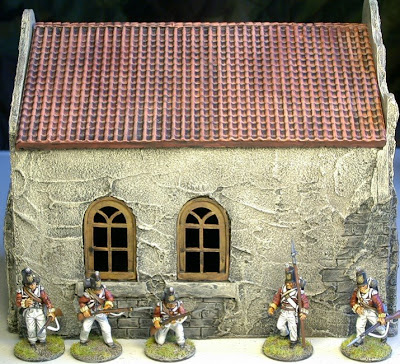 The shot below has a Victory Force US sniper in the bell tower. 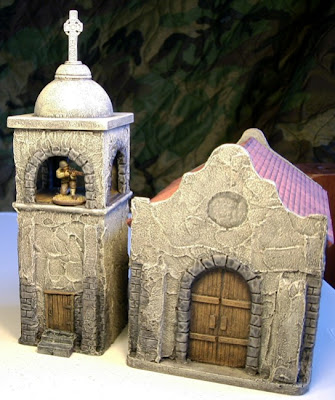 Finally, a shot of with the roof & bell tower top removed. 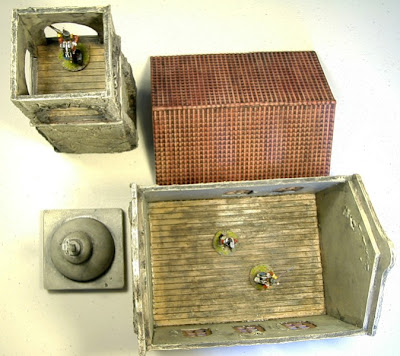 It is a very nice model, and quite simple to paint. I primed it all in flat black; then dry-brushed successive coats of Ceramcoat Mudstone, Sandstone, & Sandstone mixed with White for the stucco. The stones were dry-brushed with a light grey mixture. The roof was dry-brushed with a pale red mixture, adding various amounts of Yellow, Sandstone, & White. For the wood, a mixture of yellow & red ochre was dry-brushed on. Pledge (formerly Future) floor finish was brushed over the entire model for a protective coat. Then it was given a final spray coat of Krylon Matte Finish. Next is an Old Glory bombed-out European 3-story building.
Posted by DeanM at 3:22 PM 3 comments:

Adrian & I play-tested a game which we will be hosting at Enfilade next month. We based the game on the Hundred Years War battle of Formigny, using the scant information available online. We feel it will be an interesting game because it will showcase the famed English longbow against heavily armored French knights & MAA. There are also terrrain factors (a stream to the initial rear of the English), light cannon (French), & an unexpected flank attack. Here is a link to a brief overview of the battle: http://xenophongroup.com/montjoie/formigny.htm and a map from the same link:

This will be my first-time hosting (GMing) a WAB game - so I want to prepare for this as best possible. We plan to have at least one more play-test game. Hopefully, I will be able to post a review of a well-received game next month after Enfilade. Either way, I enjoyed learning more about my French army, as we well as Adrian's English. I particularly like my French late-Hundred Years War army - with its powerful mounted & dismounted knights, light cannon, crossbowmen & handgunners. The missle troops are like the anvil (keeping the enemy engaged) & the knights are like the hammer.
Posted by DeanM at 7:32 AM 1 comment:

Finally played a WAB game today after fairly long break - my Normans against Scott's Flemish army. Unfortunately, my camera wasn't set right - most of the photos are too blurry - this is the best one: 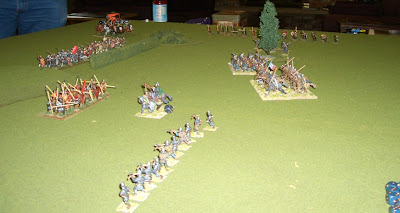 This is either turn 3 or 4; as in the distance some of Scott's Viking Dogs of War and Liberi bowmen have come on the table. For our scenario, he was allowed to bring these units and his mounted Milites on at the start of turn 3. My crossbowmen unit in the foreground did very well with long-range shooting. To their right front is the remnants of my Pueri unit, which I foolishly used to charge Liberi spearmen in shieldwall. This unit was later destroyed by my Norman Milites coming up to charge them. This same unit of Milites also destroyed the Flemish Milites in turn 6; which was the final turn. I must add that Scott was very surprised when his Flemish Milites had chased my other mounted Milite unit after beating them in a round of combat - he missed overtaking me by 1"!
Up to turn 5, it was looking as if the Flemish army would slowly destroy my army piecemeal. My Sergeant Dogs of War two-handed axemen, as well as Scott's dismounted Milites were not really factors in this game. The mounted units of both armies pretty much dealt most of the blows. Again, sorry I didn't have more (or better) pictures to post.
And last, but surely not least, many thanks to Dan & Adrian for hosting & providing expert game mastering.
Posted by DeanM at 6:30 PM No comments:

I finally finished my Frenchmen. This is about a company's worth. There are four platoons, each with a couple of Chauchat LMGs. These are all Old Glory figures, and quite nice actually. There are two sets of their infantry, one set of their Trench Fighters, and one set of Chauchat machine gunners. I think these guys are better sculpted than the Germans - at least the "Reservist in Pickelhaube" guys.

I also have a pair of 37mm Infantry Guns; sort of a light cannon. I plan to only use these if, and when, the German A7V tank enters the fray.

Next up are the German Trench Fighter set that were my first order of WWI guys - along with the French Trench Fighters. I also have some Great War Miniatures German Jaegers ordered which I will pick up at Enfilade next month.
Posted by DeanM at 9:07 PM No comments: