Finished up the two battalions of Perry Austrian line infantry. As mentioned in the previous post, only one box of plastics were used to build these two 24-man units. Although there are 48 figures in the set, there is only set of command figures. One of the units is currently led by an NCO, and flag pole was fashioned from a Victrix British figure. Also, only one unit has a drummer - and since I place most drummers in the rear of the command stand, the missing one isn't too noticeable. A metal command may be added in the future.

These aren't representative of nay particular regiment, as the facing colors were used by several different ones. 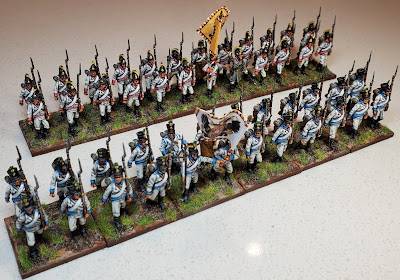 The cross straps and musket slings were highlight with Vallejo Game Color Artic White (which is the only white I currently have on hand), and the uniform a mixture of the white with Vallejo Stone Grey. 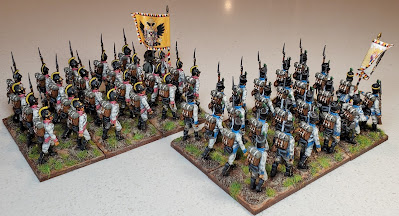 The gaiter buttons are nicely sculpted and paint up pretty easily by applying the brush tip at an angle and sort of sweeping the paint along them. The Minwax staining helps define the buttons too. I hope Perry (or Victrix) will someday release plastic French in full gaiters - preferably Old or Young/Middle Guard types.

There are now 6 24-man battalions for the token Austrian force. The Perry and Victrix plastics work well together, IMO. Still need to paint up the box of Cuirassiers/Dragoon. On the gaming front, another Imjin War naval game is scheduled for Friday - this will be the third time playing the rules, and should have it pretty much down by now. Thanks again for stopping by and wishing you all the best!
Posted by DeanM at 2:49 PM