Although I've only played 40K once - and not versed at all in the lore and codices, I just had to get some of these 7" tall, articulated figures made by McFarlane when I stumbled upon them on ebay. The unpainted ones will be a Salamander and Space Wolf - hopefully. The pre-painted red one is a Blood Angel, of course. I picked up an older Space Marine codex book (also from ebay) just for some background. Pictured below with a normal 28mm Space Marine figure for scale comparison. 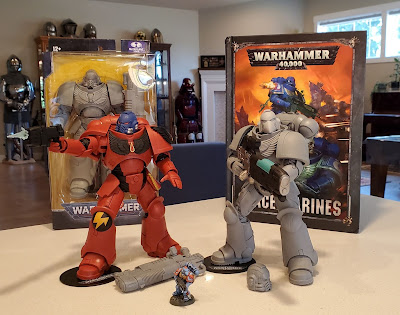 The figures are articulated by ball-joints, which can be pulled apart to facilitate painting. The "Beaky" helmet/head is from a separate ebay parts vendor. Just had to get one in this helmet. 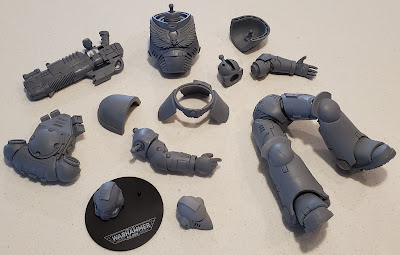 The rattle can green is a bit too dark for the Salamander; possibly an undercoat of yellow would've helped. Might try to find a lighter green to overspray as a highlight. The blue is okay for the Space Wolf - tried to give it a lighter coat to allow some of the grey base color showing. 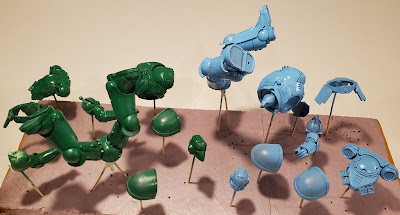 Anyway, just a quick WIP update on a side-project as a change to 28mm historicals. Hopefully not too offensive :) I'll be heading out with my buddy to a game day at a privately owned/operated veterans museum. Taking our Imjin War naval game stuff in case they have an open table. Thanks as always for stopping by and checking out the blog. Best wishes to you all!
Posted by DeanM at 9:06 AM