Here are the two combined grenadier battalions - one each Germans in all "white" and Hungarians in blue "tights". Still have several spare figures for skirmishers to do, as well as the two mounted commanders.

They're not ID'd as from any particular regiment, although the facing colors are listed as being used by several regiments. Tried to paint the facing color piping on the shoulder straps while leaving some white on the outside to represent the pack straps. Later saw some images showing the pack straps under the shoulder straps - should've painted the piping fully to reflect this - too late to go back now. 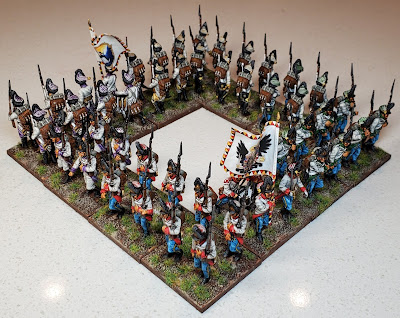 To highlight the white, a drop of Vallejo Stone Grey was added to give it a slightly darker shade than the white cross straps. As mentioned in the previous WIP post, the piping and lacing for the Hungarians' trousers were painted for effect rather than accuracy - i.e. only yellow for these (over a black basecoat) - not alternating black and yellow as they actually were. 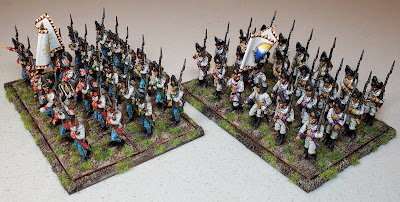 For whatever reason(s), I never had a prior interest in Austrian Napoleonics, but after doing these few, I can see they are quite appealing with the various colored facings. Thinking of doing up some regular line infantry, but torn between the more "useful" shakos and the cool looking earlier helmets.

The grey colored plastics used for this set seems to be stronger (more durable) than the earlier tan plastic sets used for the French and British when first released.

Well, so much for now - happy to have these added these to the collection. Quite useful gaming-wise as they can be used for and against the French. Appreciate your stopping by and wishing you all the best.
Posted by DeanM at 11:13 AM