My buddy Scott and I just finished an excellent playtest today. Suffice to say we had a great time and really enjoyed the rules. Below is a shot prior to the game with additional "turn counters". 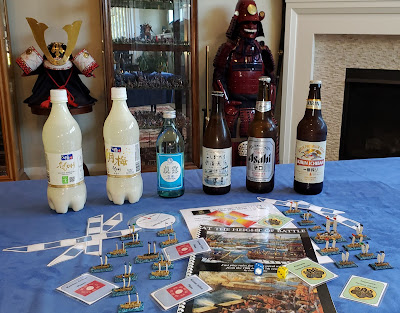 Here are a few pics of the game. We used the ships from the starter set as well as some Chungnugong (small turtle ships) divvied up between the two sides (2 squadrons each). They were classed as they are for the Koreans, but for the Japanese we used them as stand-in Ataka Bune. The game flowed great and got in 3 complete turns. We were able to get into firing range within the second turn and boarding actions in the second and third turn. We plan to get more games in very soon - with more ships for both sides.
Start of the game with Japanese nearest the frame. The O'Ataka Bune was the overall command ship. We gave the "admirals" of both sides "Good" ratings and the other squadron commanders "Average" ratings.
The dice indicate which ships are in firing range and will be used for scoring of hits once combined with the additional artillery factors depending on facing of the shot. The red and yellow firing template comes already laminated, as the rest of the gaming aids to include a QRS.
The Korean fleet, skillfully captained by my buddy.
I ran the Japanese side; and this was about the time I figured out that I should've been using more historical boarding tactics instead of shooting at long range. 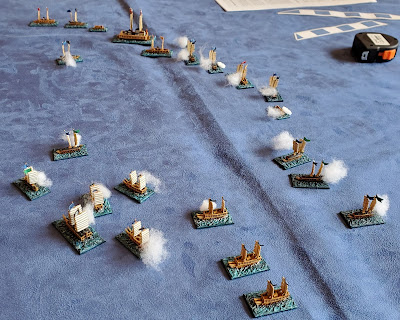 The blue and white movement "sticks" are included in the starter set; the marking are in one inch increments and come with 30, 45 and 60 degree corners for turning. Most ships can only move up to 4 or 5 inches, so these are perfect for that. As for turning, the rules allow for two turns during a move - once at the start of the move and another mid-way of the move - up to the degree of movement allowed that particular ship. The only time we needed a measuring tape was for the max 12" distance of shooting heavy artillery cannon.
Boarding action - w Japanese Ataka Bune successfully boarding Korean ships.
Not to be outdone, Scott later charged into the action with his Panokseon and small turtle ship. We ended up with 3 Korean vs. 2 Japanese ships in melee.
The battle is getting hot - boarding actions and firing going on. 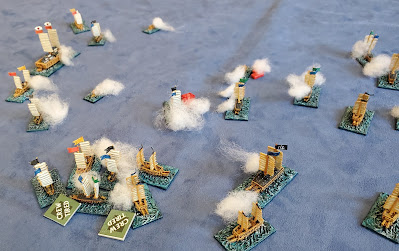 A great set of naval rules for this period - which include the few centuries before and after the Imjin War. The rules include stats for Chinese and earlier Korean ships as well.
Posted by DeanM at 5:34 PM