As with the earlier ships, they are based on plasticard with textured acrylic caulking. They were then sprayed with a white undercoat, and the main areas of the ship given a wash of Vallejo Skin Wash with a little Black Ink, and finally highlighted by dry-brushing. The "water" was painted with a watered down 65:35 mixture of Vallejo Dark Prussian Blue and Deep Green, then a very light dry-brushing of white for the waves/wake. 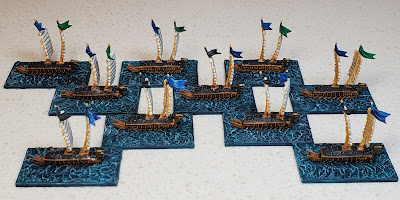 The Koreans now have enough ships for two decent sized squadrons - not counting the ships my buddy is still working on. The Japanese will definitely need some reinforcements now.

The photo above shows the size comparison of these with a full-sized Geobukseon turtle ship and Panokseon.
Plan on having a playtest soon - probably using these small turtle ships as proxies to supplement the Japanese until their actual ships arrive. Until then, thanks as always for stopping by and wishing you all the best.
Posted by DeanM at 6:47 PM