The Battle of Argos - Another Hail Caesar Pre-Game Checklist

Yet another roll call of sorts in preparation of hosting games again this summer. This one is based upon the Battle of Argos, where Pyrrhus met his end with the assistance of a roof tile dropped on his head by the worried mother of an opponent. Most of the figures here have already been pictured in the two earlier posts; the exception are the two Spartan Hoplite units on the side of the allied Argive-Spartan-Macedonian army. 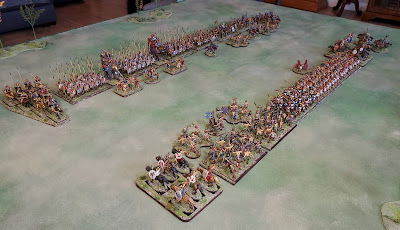 The allied army facing Pyrrhus with his elephants and pike phalanxes. Both sides have Gallic/Celt mercenaries. 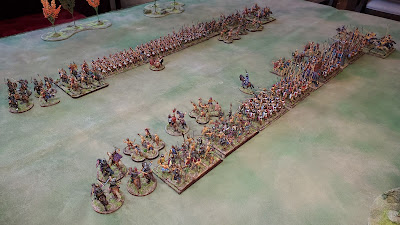 The actual battle was fought inside the city of Argos; Pyrrhus having been secretly allowed in. He was killed within the walls of the city when one of his elephants was killed and blocked the gateway out.

The allied battle line from their right: 1 unit each of Gallic medium cavalry and Greek light cavalry - both with javelins; 2 large Spartan Hoplite phalanx heavy infantry. 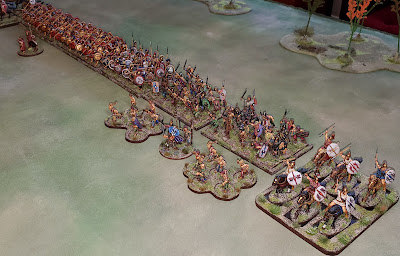 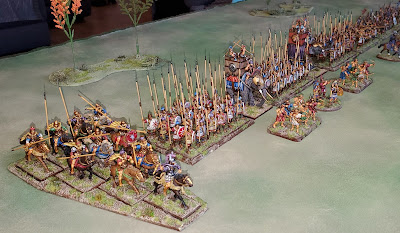 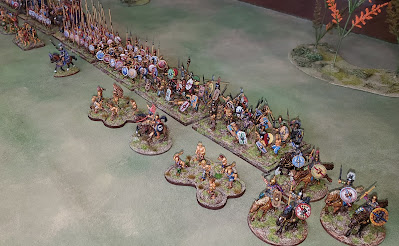 The Pyrrhic army arrayed. In retrospect, I might give the Mercenary Hoplite unit to the allied army, and only keep the 3 pike phalanxes and 2 Gallic Mercenary warbands for the Pyrrhic infantry.

I may end up following the historical scenario by having less units fighting inside of the city - but this will require suitable terrain like small houses, etc. A lot of work, but would be interesting, I think.
Anyway, thanks again for allowing me to indulge myself with these "pre-game" setup photos. One thing I realize is I could use a few more command stands. Thanks again for checking out the blog and best to you all.
Posted by DeanM at 4:00 PM