Following the previous post, I figured I'd array the forces for an EIR vs. Ancient Britons game - again using Hail Caesar for rules. As I mentioned earlier, I've not played any wargames for over a year, and more than a little rusty with the rules and troop assessments. As the Celts were already on the table for the Invasion of Macedonian set up, I went ahead and pulled out the EIR figures which have never tasted battle as of yet. No specific battle, but would be either during or soon after Boudica's Revolt. Again, the troops are pretty much massed in battle line for the sake of fitting into the camera lens easier. In an actual game, there would be more terrain and varied positioning of troops. 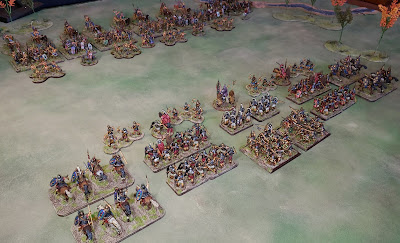 The Roman's figure count and unit sizes are on the smaller size, but will give them stats to match the larger-sized Celtic units. 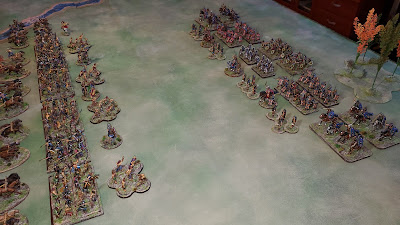 The EIR army battle line. I used the same units/troops for the Celts in the previous post, so left them out here. 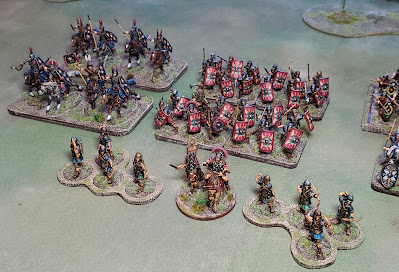 The right of the Roman battle line.

The center of the Roman battle line. 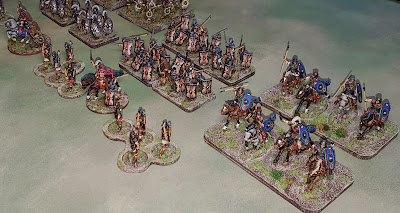 The Roman left. I made the standard size for Roman infantry 12, and 4 for cavalry.
Since our governor recently announced our state will be back to "normal" in June, figured I'll be hosting games again this summer so wanting to take stock with the figures I have on hand. Although I'll likely be capping the player count to 4 (2 per side). I usually go with 6 (3 per side); and may up the count later on if all goes well.
Thanks again for checking out the blog and wishing you all the best.
Posted by DeanM at 9:30 PM