As with the earlier posts inventorying units for Hail Caesar games which I hope to host in the not-too-distant future, here's one for a Pike & Shotte game. Granted not too many units, but as I've yet to play my first game with these rules, probably best not having too many units anyway. These are all ECW troops, including some Scots Covenanters. Probably doing something based loosely on Marston Moor where the Scots were present and also Prince Rupert and his Blue Coats - another unit I have. Again, the troops are packed together tighter than in an actual game to allow for better photos. Also, terrain is lacking and would be added for a real game. 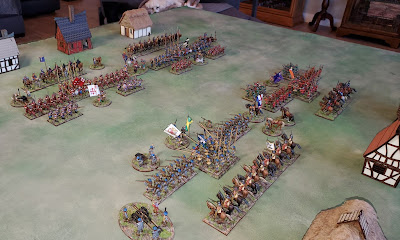 Royalist army at the top of the photo and Parliamentarians and Scots at the bottom of the photo. 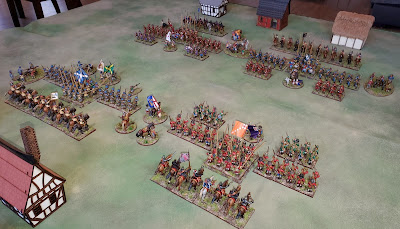 Another view from the Parliamentarian side facing the Royalists. 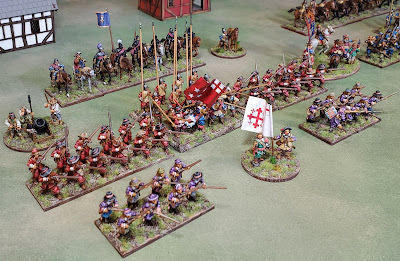 Royalist right with 2 units of Commanded Shot with firelocks screening a regiment of pike and shot; a mortar in the rear along with a unit of Cuirassiers. 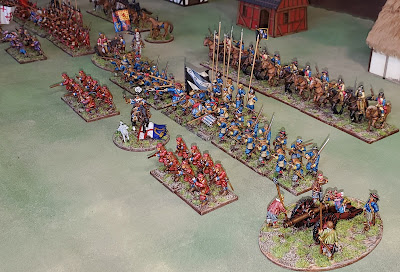 The Royalist left with Prince Rupert's 2 Red Coated units of Commanded Shot with firelocks; his Blue Coated regiment of pike and shot; a demi culverin flanking; in the rear Prince Rupert's unit of Horse. 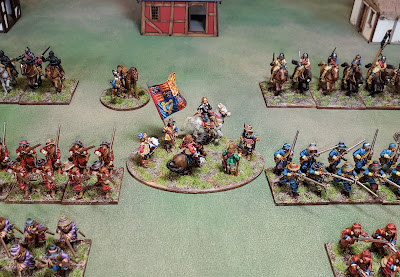 King Charles taking the spot of Army General in the army's center.

The Parliamentarians and Scots Covenanters army. 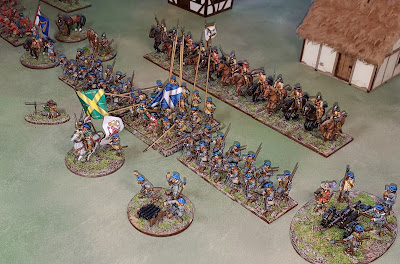 Scots Covenanters on the left wing - a Sniper; a Frame Gun and a 9 pounder Falcon; a regiment of pike and shot; a unit of Horse with sword and pistols. 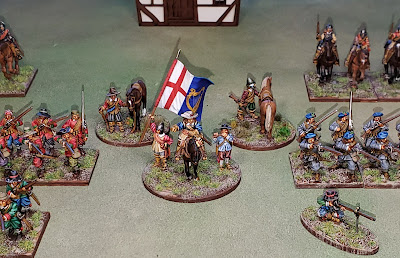 The Parliamentarian army general - no one in particular at the moment; possibly Sir Thomas "Black Tom" Fairfax. 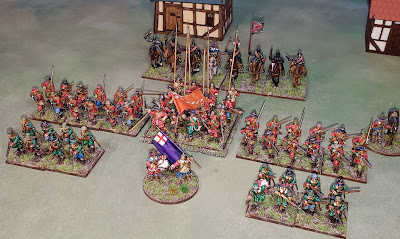 The Parliamentarian right; 2 units of Command Shot with firelocks; a regiment of pike and shot; a unit of Horse with swords and pistols.
Again, not a whole lot of units, but enough for a trial game of the rules, I think. Thanks again for stopping by the blog and hope you enjoy looking around. Best wishes to you all as always.
Posted by DeanM at 1:00 PM