Finished the two 12pdrs and unicorns (20 and 10pdrs). These should be enough to fill up two or three fleches if I ever get around to hosting a "mini-Borodino" game. Plus, I need to add some cavalry - hopefully the Perrys will release their plastic Prussian/Russian Dragoon set in a few months.

The crews are placed pretty tightly around the guns as I like to use smaller bases. I don't want the bases themselves taking up too much table space.

As I've mentioned in previous posts, I like the Russian uniforms (at least the foot), because the main colors (green and red) are a nice combination, and they don't have too much piping or lacings - like their French and British counterparts.

I plan to have them in batteries of 2 or 3 guns, and in emplacements. Need to someday build appropriate terrain for the gun emplacements. 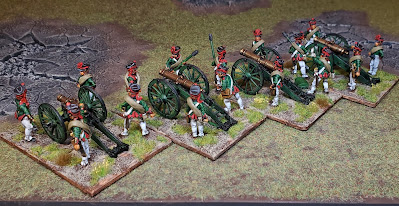 Pictured below along with the earlier painted 6 pounders.

I'll probably work on the Victrix Hoplites next - and get around to the metal Perry Jaegers and Grenadiers later. Thanks for stopping by and best wishes and health to you all!
Posted by DeanM at 8:48 AM