Here is a Black Tree Design 2nd Crusades figure painted up as the Anglo-Norman Warlord John de Courcy. He was quite a reputable warrior who conquered much of Ireland in the latter part of the 12th Century.  The De Courcy arms are three red (gules) eagles on a white (argent) field. His helmet is the Phrygian Cap style popular at the time, after the 1st and 2nd Crusades. 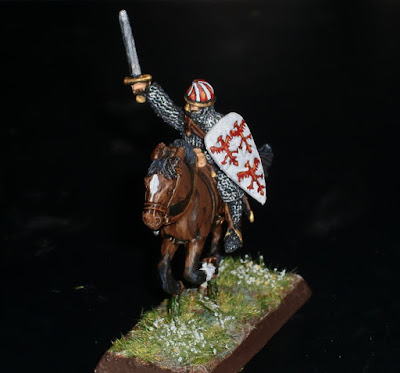 De Courcy's actions in Ireland were not sanctioned by King Henry II, who declared De Courcy a traitor. Later, Henry's successor, King John ordered Hugh de Lacy to arrest him. De Courcy was famed for his martial prowess and his capture by Sir Hugh was as much by guile as feat of arms. 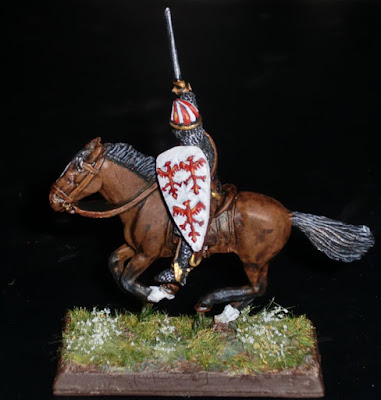 Here is an excerpt from the Book of Howth of the capture:
"Sir Hugh de Lacy was commanded to do what he might to apprehend and take Sir John de Courcy, and so devised and conferred with certain of Sir John's own men, how this might be done; and they said it were not possible to take him, since he lived ever in his armour, unless it were a Good Friday and they told that his custom was that on that day he would wear no shield, harness nor weapon, but would be in the church, kneeling at his prayers, after he had gone about the church five times bare-footed. And so they came at him upon the sudden, and he had no shift to make but with the cross pole, and defended him until it was broken and slew thirteen of them before he was taken. 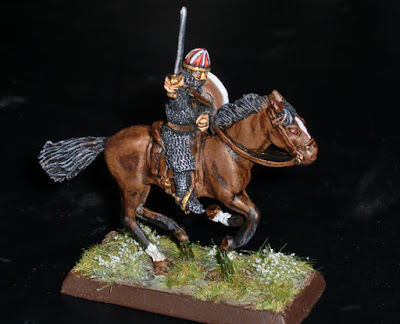 His armor is not much different from those worn at the Battle of Hastings about a hundred years earlier. The wearing of surcoats still not common, and the shield still fairly large. Mail was more fully worn over most of the limbs. 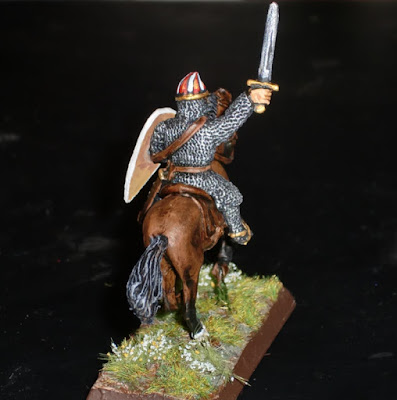 De Courcy was imprisoned after his capture, and later released upon his oath of going on pilgrimage in the Holy Land.