Here are the 35 figures from the Wargames Atlantic French WW1/2 set. I ended up using some Vallejo Grey Blue to highlight some of the cloth. A pretty good match for the Army Painter Wolf Grey spray paint.

The helmets were painted a little darker using a mixture of black, Dark Prussian Blue and Grey Blue. 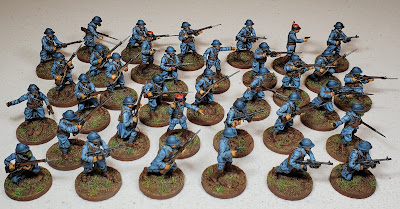 They're based on Litko 25mm plywood rounds (3mm thick). Same as the German set painted a couple of years ago. I've waited this long for these Poilus. Plan to get some WW1 gaming in after next weekend's convention. Probably using Bolt Action - at least at first.

I'm glad to have these done as I always liked the Horizon Bleu uniform. I sold off a bunch of Old Glory French some years ago - so these are nice replacements. 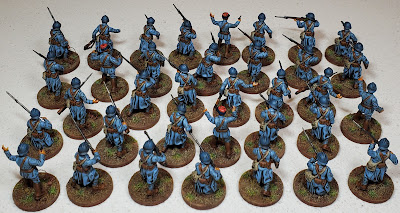 What I need to be doing is refreshing myself with the La Haye Sainte Black Powder and Marston Moor Pike & Shotte games that I'll be hosting next weekend at Enfilade. I prepared QRS specific for the games and even emailed copies to some of the players. Hopefully it'll make the games run that much smoother. In any case, looking forward to hosting the games and seeing old acquaintances - some of whom I haven't seen since the 2019 convention. Thanks for stopping by and wishing you all the best!
Posted by DeanM at 6:23 PM