Well, I just couldn't stay away. Actually, a box of long-awaited Wargames Atlantic French Infantry finally arrived the other day. I had ordered them last September, but to get the free "over $50 shipping" I had added a box of yet to be released Italian Infantry. As it happened as soon as one set was available, the other went out of stock. This happened several times to the point they were kind enough to send me the Italian box ahead of the French one - and sent both when available with the free shipping. 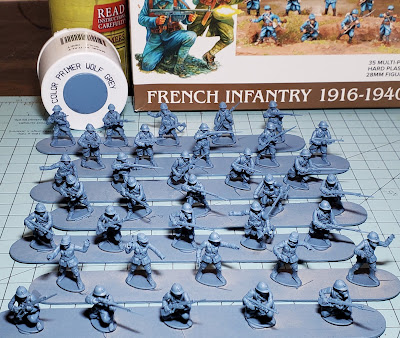 As with the previous WW1 German and WW2 Italian Infantry sets, these figures are really nice and allow for multiple poses and weapon combinations. This set has seven unique body poses of five each (including one for the officers) and various arm/weapons choices. The set also includes separate sprues with Senegalese heads and WW2 weapon/arm combinations. I chose to do all as WW1 Poilus and base coated them with a can of Army Painter Wolf Grey primer (which was used for the big McFarlane Space Wolf figure a while ago).
Just a quick update to let you all see that I'm back to painting figures again. Next weekend (Memorial Day Weekend) will be our annual big convention, Enfilade. I have four games to run starting on Friday afternoon and until Sunday. Hope to post some pictures of the convention - should be more games and attendees than the ad hoc one we had last September due to the restrictions. Until next time, best wishes to you all!
Posted by DeanM at 11:28 AM