Okay, only eight total ships, but it's a start.

Here are the three 1/1200th Langton ships - two quinquereme and one trireme (the one with two masts/sails). One of the quinquereme has a catapult. Really tiny stuff, but looks pretty much like what it should be.

And the five 1/900th Valiant pentekonters - which will be used as liburnians. 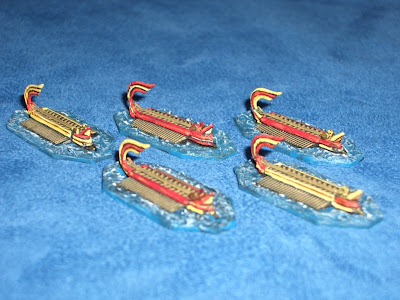 As you can see, they are all in a red/yellow color scheme borrowed heavily from the designs Eric Hotz created for his Roman Seas paper ships. My buddy already painted his Langton ships in blues; but I actually like red better anyway. Hope to get in a small Roman Seas refresher game soon.
Posted by DeanM at 6:12 PM