Mustering the troops for another Hail Caesar game next week - this time it will be a Successor vs. Successor game against my buddy's troops. Mine are mostly Victrix that were painted up during the lockdown and have yet to see battle. 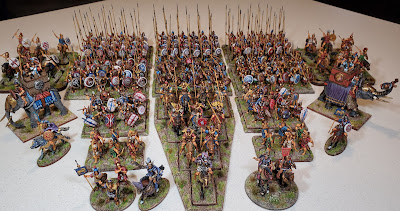 The Aventine elephants, Foundry and 1st Corps hypaspists (unit directly behind the wedge), Relic Seleucid (mounted fig on the wedge's right) and Relic Pyrrhus (mounted fig on the wedge's left) are remnants of a Seleucid army which was sold off many years ago, in a momentary lapse of judgement. The two small warbands of Samnites on each side of the hypaspists and archers were painted a few years ago, but also have never seen any action yet. 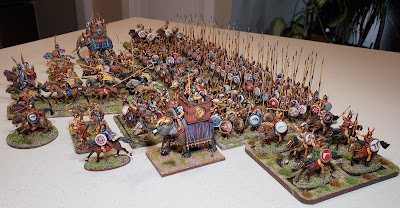 I'm not sure what kind of elephants Pyrrhus had with him in Italy and upon his return to Greece, but these Aventine ones are the larger Indian types, I think. They probably wouldn't have been as well armored as latter Seleucid ones like these. He did have elephants with towers though, as evidenced from period artwork. Gallic mercenaries could also be added to this army, as Pyrrhus had these too, but for next week's game they'll be left out - or maybe swapped the Samnites out for them.

There are 15 units in total: 3 units of heavy infantry pike phalanxes; 2 units of mercenary hoplites heavy infantry long spear phalanxes; 2 units of Samnite medium infantry; 1 unit of hypaspists Drilled, Stubborn and Elite 4+ medium infantry; 2 small units of light infantry archers; 2 units of light cavalry w/javelins; 1 unit of Companion Elite 4+ medium cavalry w/kontos; and 2 elephants - one crewed with bow. Besides mustering the troops for the game and taking some pics of them, I wanted to post another blog update to make sure the image upload was still working properly. It is working fine again - as these images uploaded without issues.
The next post should be the AAR of the Hail Caesar Successor game on Friday. The day after this game will be a Dragon Rampant Christmas collective game - probably around 10 or so players. I plan on bringing my recently painted Sisters of Battle Junith Eruita flying pulpit. It'll be a single-model unit Elite Rider with all the bells and whistles upping her to 12 points - the max per warband for the game. Until then, thanks for stopping by and checking things out. Wishing you all a happy and healthy holiday season - and beyond!
Posted by DeanM at 12:00 PM