Phew! What a relief, it seems my issue with uploading images has resolved itself. Anyway, without further drama, here's a report of the Hail Caesar game yesterday.

Thanks to a couple of my buddies, got in a long-awaited EIR vs. Celts Hail Caesar game. In fact, this is first Hail Caesar game I've played (actually umpired) in many years. It was a great game going for 9 full turns, and played with figures never gamed before - painted during the lockdown period. Here's a staged shot of the layout prior to the start of the actual game. Note the roundhouses and Druid objective marker, both recently added, on the far right of the picture. 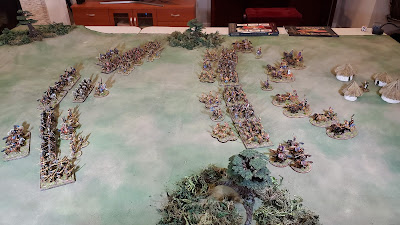 As those of you who play both Hail Caesar and Black Powder, you know they are very similar in overall mechanics, but there are some interesting differences. For one, support units in hand to hand have their own attack dice in Hail Caesar. In Black Powder, support units values are added during the combat resolution portion. Shooting is also not as important as in Black Powder, and the emphasis is on combat. Anyway, on to the images of the actual game - as usual, I failed to capture all of the action during the heat of battle. 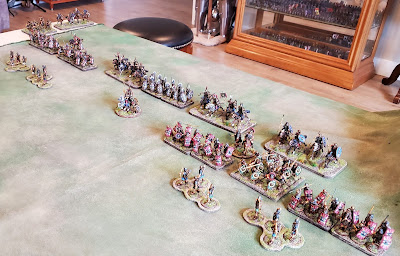 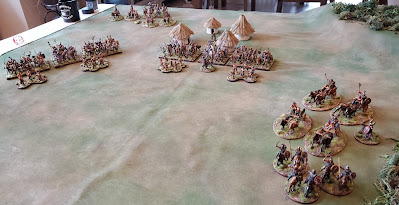 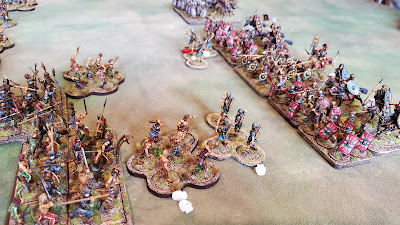 Celt slingers charging Roman Auxiliary archers - the archers causing casualties from closing fire - the unarmored slingers having no saves. The slingers had already caused a casualty to the archers in an earlier round of shooting 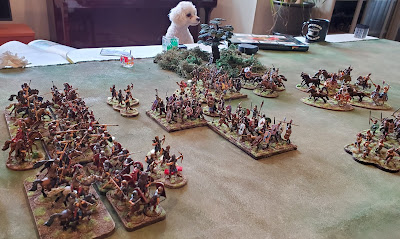 Roman left at the bottom of the picture; Celtic horses in the background roaming the battlefield for opportunities. 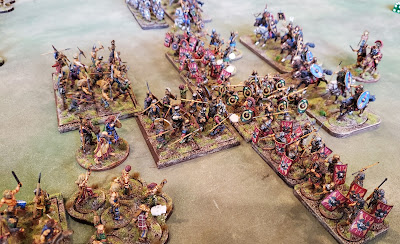 Legionaries and Auxiliaries charging into a warband of nobles - a unit of Auxiliary archers having broken after losing combat with the Celt slingers.

Celt warbands advancing on the Roman battle line, while Celt cavalry and chariots maneuver on the flanks. 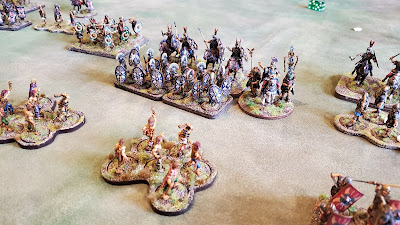 The Roman center with the army general joining a unit of Praetorian foot - supported by a unit of Praetorian cavalry to their rear, about to charge into small unit of unarmored slingers. This should have been a cake walk for the Romans. However, due to accurate and deadly closing fire from the slingers - one of the hits being a 6, the Romans had to take a Break Test. This was failed with a score of 2, and the with the casualty, they had to break!

The Roman battle line showing the loss of the Praetorian foot in the center. 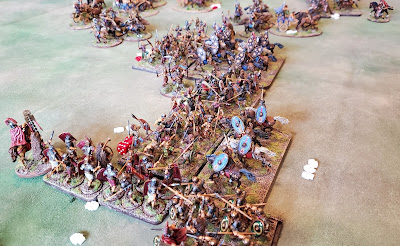 A Celt warband being attacked by Roman cavalry to their front, and a unit of legionaries to their right flank. The division commanders of both sides joining in the fight. In the distance, Praetorian cavalry charge into another Celt warband - avenging the loss of their infantry brethren. 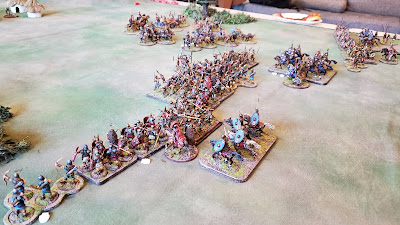 The Roman left victorious after destroying the Celt warband. 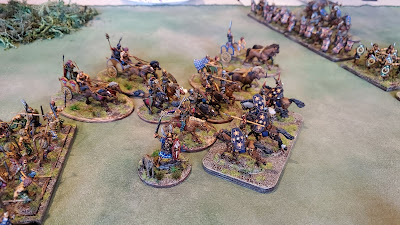 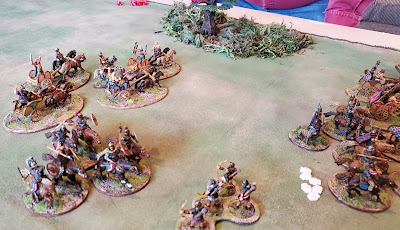 Another division of Celt horse looking to join in the action - somewhere. 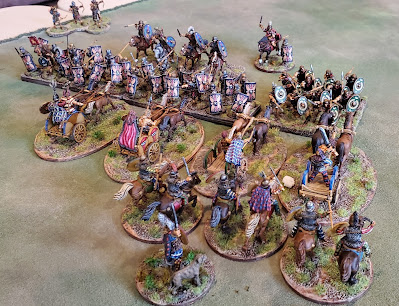 Two units of Celt chariots - one attacking a unit of legionaries and the other a unit of auxiliaries. Celt horse supporting the unit fighting the auxiliaries. 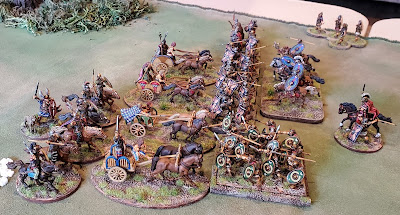 Celt chariots supported by cavalry vs. Roman infantry.
At the end of turn 9, the Celt forces had lost enough of their army to declare it a Roman victory - a very close victory at that. Also, one of the minor victory conditions wasn't achieved by the Romans. This was for them to recapture their lost eagle and standards held by the Druid priest within their village on the far end of the table. The Romans actually never made it past the mid-way point of the table, but they had won the game by attrition.
All in all a very satisfying game. It was great to re-familiarize myself with the rules after so many years. One of my buddies (who played the Romans) and I enjoyed it so much that we're playing a Macedonian/Successor game next week. Looking forward to this game and posting another report as well. Until next time, thank you all so much for visiting the blog and leaving such nice comments. I realized how much this blog is a part of my life after not being able to update it properly (with images) for less than 24 hours! Happy Holidays!
Posted by DeanM at 8:54 AM