Well, I hope this game gets off the ground tomorrow - my buddy Pat wants to try out his Ancient naval rules he so diligently drafted this past week; after the game I hosted last Friday. Incidentally, I couldn't make today's Truants game due to some other commitments. I did however manage to set up the table for the Trojan War game. It's a basic set up with Greeks and Trojans, each with three "divisions" of various types of units facing off each other over an open plain. 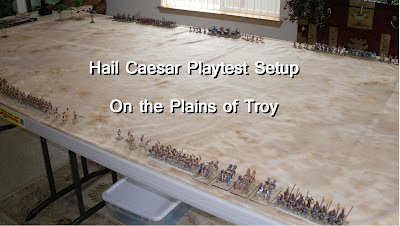 I plan to use very basic stats for the several types of units - formed infantry, archer skirmishers, javelin skirmishers and chariotry. Only the Myrmidons have a special rule - "Tough Fighters" as well as being "Stubborn." I added the 6 Dendra guys for the heck of it as a Tiny unit too - I may give them some special armor save though. Here are some shots of the divisions and units. 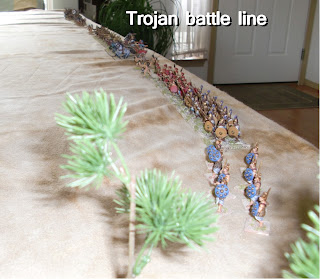 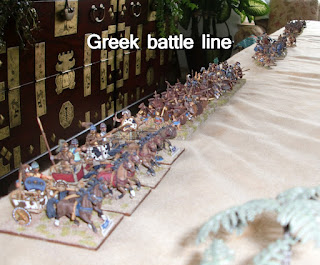 Again, this will only be a playtest to feel out the rules. Once I feel comfortable with them, I'll likely come up with a more interesting scenario. Maye one where different allies can join in after so many turns, or if a certain unit is broken. Something along the lines of Memnon and his Ethiopians (or Cissians, according to some sources), and Penthesilea and her Amazons coming on later in the game if Hector or enough Trojans are killed.
Posted by DeanM at 2:17 PM