Played a very enjoyable game today with my buddy Adrian. We used the new WAB Armies of Antiquities lists for my Late-Japanese army and his Medieval English. This is the first time we've played WAB since last May's Enfilade! convention. To be fair, we GM'd that game and most of the games leading up to it. So, to actually play our own armies again was awesome! Our armies are at 2,000 points for the pending WAB "tournament" at this year's Enfilade! I may switch to an Early Imperial Roman all-infantry army for the convention though. We tried to do everything by the "book" for this game. We started by rolling for terrain set-up. As I won the initial roll, we used the Far-East options. Adrian's army had the Stratagem option, so he ended up moving some of my terrain at the end! Anyway, here's what our battle lines looked like after deployment - Adrian placed his first as he had more units. 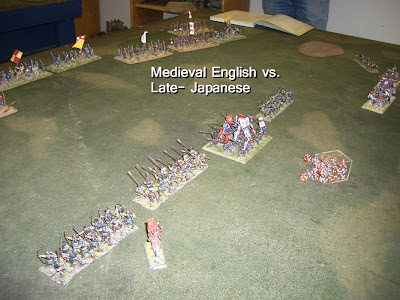 We had the same basic set up; bowmen interspersed with other infantry. In my case, a unit of Bushi with thrusting spears and bows, and two units of Retainers with pikes. In addition to several strong Longbow units, Adrian's English had dismounted knights in plate armor wielding double-handed weapons. The Japanese army had the only cavalry - a potent unit of mounted Bushi in skirmish order with bows. 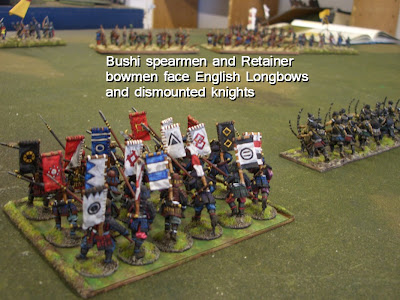 At the start of the game our units in skirmish formation got to do a free 4" move. I tried to move my Bushi cav in skirmish a little closer for bow fire. 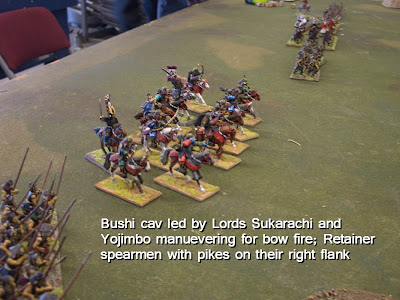 Adrian moved his bowmen forward and then placed his stakes (which he claims he couldn't find in the new AoA but insisted on using the Armies of Chivalry rules - whatever). 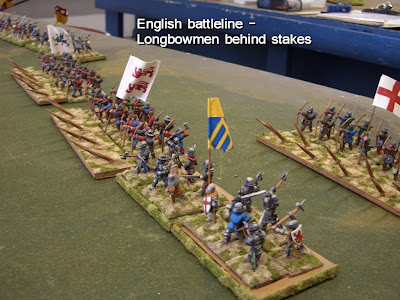 I won the roll to go first and opted to start using my mounted Bushi's awesome firepower. They have Ballistic Skill 4, and also had two Lords with Ballistic Skill 5 - how can you not score hits. Well, I'll tell you, with bad die rolls - like I did. That said, I did manage to attrite some of his forces; even his dismounted knights in plate armor with a 3+ Save. 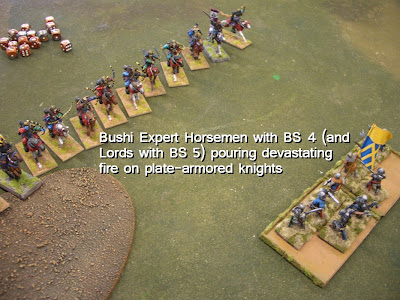 The English Longbowmen were no slouches for missile fire either. What with their ability to mass fire both ranks in full and outranging my bowmen, they managed to have a couple of my archer units Break. 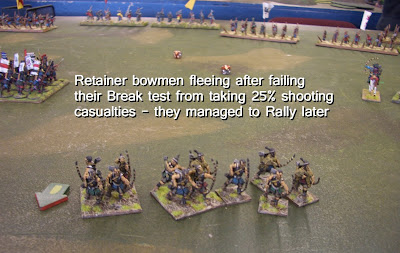 The Retainer bowmen ended up Breaking one of the English bow units - and off the table they went. The Japanese themselves ended up losing one unit of bowmen, but the most tragic thing is I kept forgetting my Bushi spear unit also had bows - with Ballistic Skill 4. Serves me right for not having the models with bows too! 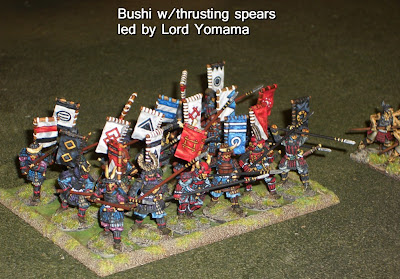 We called the game after turn 4 (or was it 3) a near thing - we both had lost a unit of bowmen, and most of the other troops were still holding back from actual Combat. We ended the game early because we're both on the planning committee for Enfilade! and we had to start the meeting. Anyway, I had a great time and it was so refreshing getting to play WAB again. I had thought I'd get into Hail Caesar after really liking Black Powder, but it seems, to me anyway, that it's horses for courses. That is, I really like Black Powder for Napoleonics, but I still like WAB for Ancients/Medievals. I definitely want to get more WAB games in this year.
Posted by DeanM at 5:53 PM