Sappers and Engineers of the Guard

Figured I'd finish these guys while awaiting the arrival of the shield transfers for the Samnites. Incidentally, I also ordered a set each of Greek Light Cav and Archers from Victrix. Anyway, the figures here consist of Sappers from Black Hussar Minis (formerly Westfalia Minis) and Victrix French Artillery bodies with Perry Carabinier heads. The wheel barrow is also from Black Hussar - included as a freebie; I can't recall where I got the chest from, but it  might've also came with the Black Hussar order. Wicker gabions would probably be more appropriate, but didn't have any. 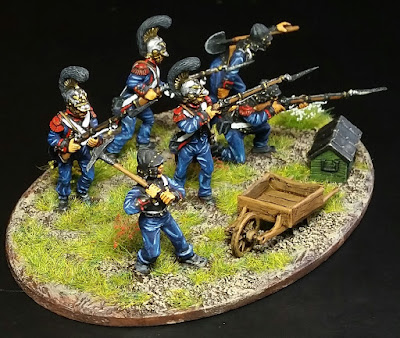 I always liked the look of these guys, both the crested helmet and also the armor used by the Sappers. The latter looking so "medieval" and generally bad a@%. 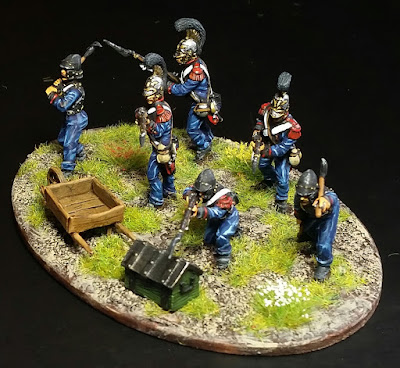 I think the actual helmets for the Engineers might've been a little taller than Carabinier ones, but they look close enough. The "Eagle" front plate was painted on as the Carabinier front plate is designed a bit differently with an Imperial "N" and a much smaller Eagle above it. 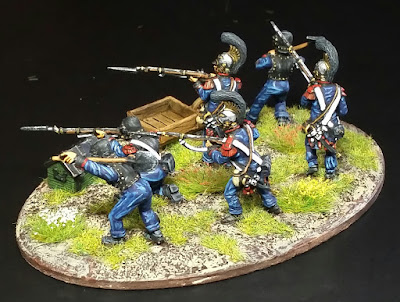 Sappers were used for siege works and preparation of gun positions, among other thing. The Engineers themselves were an odd lot created originally in 1810 as the official fire-fighters for the Imperial palaces. They eventually grew to battalion-strength and "on campaign were responsible for leveling and preparing ground where the General Headquarters were to be installed." - quote from Histoire & Collections' The French Imperial Guard, 1. The Foot Soldiers, 1804-1815. 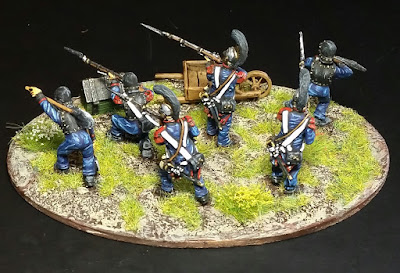 The dark blue uniform was closely based upon the ones worn by the Guard Foot Artillery. The facings were black, piped red. Practical, yet elegant IMO. 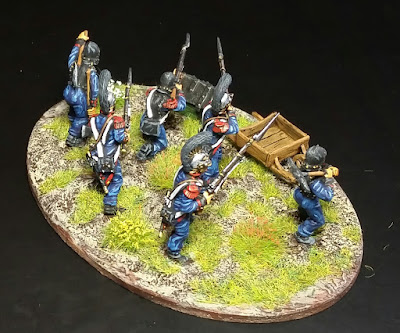 In addition to the Victrix Ancients, I also placed a small order from Perry Minis - some Red Lancers and Scots Greys. So much for now, and wishing you all the very best!
Posted by DeanM at 9:45 AM