Here's a comparison shot of the few 28mm Napoleonic makes I have.  Of course, the poses have a lot to do with it, and none of the Front Rank Spanish Guerrillas I have are actually standing straight up - except the leader guy, but his is sort of an exaggerated pose so I didn't use him.

The Foundry figure's base is built a little higher. Some of the other Foundry in the Napoleon and Staff set are shorter than this figure. I don't have any Front Rank uniformed troops, so this comparison may not help some folks. The guerrillas are all in advancing or firing poses (leaning a bit forward at that), which should help mask any sculpting style differences.


This shot compares the Perry metal Riflemen (primed) and the Perry plastic Riflemen (painted) that came as freebies with an issue of  Wargames Illustrated last year.

The plastics seem ever so slightly thinner - but it's hard to say since there are only two of them to compare against. The only difference that I can say is for sure is that the plastics don't have cords on their shakos - whereas the metals all do. No problem with that. They will be perfect together. As you can see the guy on the far left in the photo is painted up as the 60th Rifles.

This is a nice Knotel illustration of the two famous British Rifle Regiments. 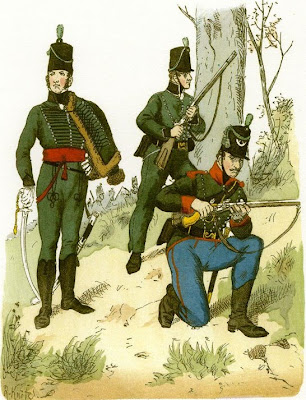 Also, an update from my local gaming store indicates he won't be getting the new Victrix Cacadores anytime soon. So, I opted to order from a vendor in the UK that doesn't charge shipping - but does charge 15% VAT as I found out during the checkout. This was the exchange rate today per Paypal: 1 USD = 0.638750 GBP. I think this is better than the same time last year - I think. I hope the Porks get here soon - I should be done with the Perry and Front Rank figures in a couple of weekends.
Posted by DeanM at 11:51 AM