Couldn't pass up this ebay purchase - it was listed at 30% off. The seller's description said the box was opened (which it was), but all contents were intact (which they were; although a lot of the metal figures had bent muskets/bayonets). 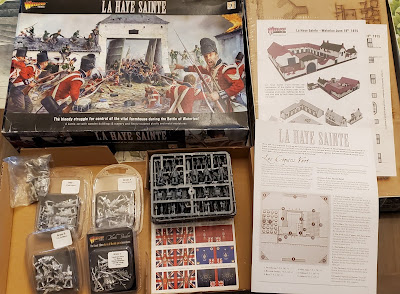 I've seen this set on YouTube videos before and always thought it would be a cool gaming scenario. With the discounted price this will now become a reality. Plan to start on the buildings first as it will be the largest terrain build I've ever attempted.

A few Perry sets have also been ordered, namely Nassau troops, to flesh out the troop strength. For French, the already completed Middle Guard in greatcoats will be used along with the plastic French that came with this set. A box of Victrix British Flank Companies to paint up as KGL infantry may also be added.

Until the next update, happy painting and good gaming to you all!
Posted by DeanM at 3:32 PM